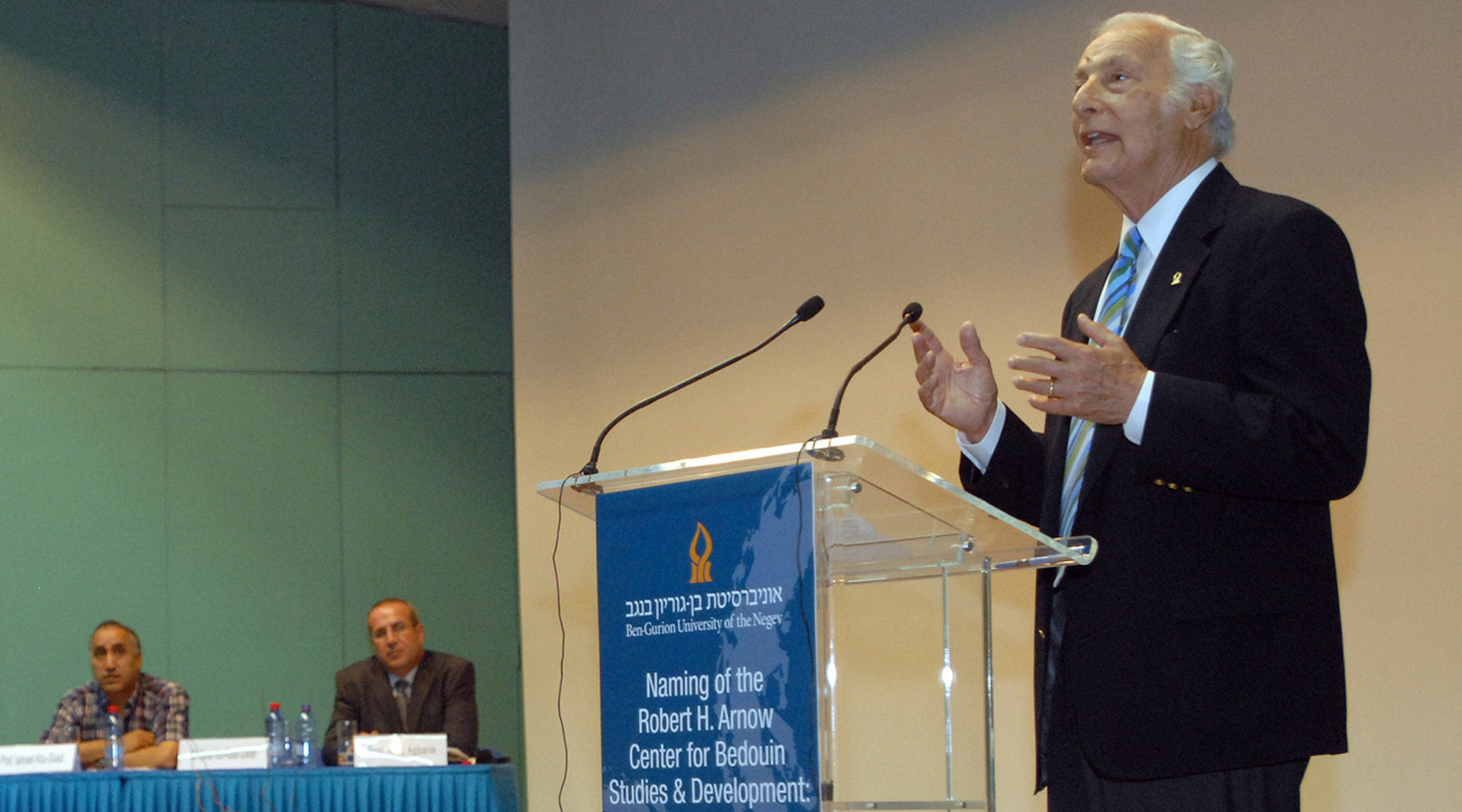 Robert Arnow speaks at the dedication of the Robert H. Arnow Center for Bedouin Studies and Development at Ben-Gurion University of the Negev in 2007. (BGU)
Advertisement

(JTA) — Real estate developer and philanthropist Robert H. Arnow — who played a key role in securing the long-term survival of the Jewish Telegraphic Agency — died Dec. 15 at his home in Scarsdale, N.Y. He was 94.

Arnow became president of the board of directors of JTA in 1967, at a time when the international news agency faced significant financial challenges. He served as president until 1973, but remained a board member for 45 years, until his death.

According to Mark Seal, a former chief executive of JTA, Arnow was essential in negotiating the separation of JTA from the Jewish Agency for Israel and into an independent operation with support from local Jewish federations. Decades later, Arnow would reminisce about his hands-on role during that transition, which included personally carrying over some of the typewriters to the agency’s new office.

Mark Joffe, former longtime executive editor and publisher of JTA, remembered Arnow as “a real mensch – a gentle spirit who was as generous with his philanthropy as he was successful in his business. He took to heart the phrase ‘give till it hurts,’ which he appropriated from his beloved father-in-law, Jack Weiler.”

In 2014, Arnow made a leadership gift in support of the merger of JTA and My Jewish Learning that led to the creation of 70 Faces Media. He was also a member of the dinner committee for the JTA Centennial Gala in 2017, the proceeds of which funded the recent redesign of the agency’s website.

“We were so blessed to have a visionary leader like Bob Arnow, who was also a first-rate mensch,” said Ami Eden, the CEO of 70 Faces Media. “There wouldn’t have been a JTA centennial to celebrate if not for his leadership 50 years earlier. It is amazing to think that almost five decades after turning JTA around, he stepped up again to help us create 70 Faces Media. He was a true leader, with the determination to lead us through the tough times and the vision to seize new, transformative opportunities.”

Born in Roxbury, Mass. in 1924, Arnow worked in his father Leon’s drug store from an early age. Following his naval service during the Second World War, he studied to be a pharmacist at the Massachusetts College of Pharmacy, intending to join his father’s business. However, after his marriage to Joan Weiler in 1949, Arnow changed course and went into the real estate development business with his father-in-law Jack Weiler, developing projects such as New York’s Grace Building and eventually becoming president of the Weiler-Arnow Management Company.

His success in business led to an interest in philanthropy and he became a supporter of numerous Jewish causes.

As chairman of the board of Israel’s Ben-Gurion University of the Negev for a decade, he championed the establishment of a center to provide support for Bedouin students. According to his family, he was the first to establish an endowed scholarship fund for Bedouin women.

Arnow is survived by by his four children, 10 grandchildren and 10 great-grandchildren. His wife Joan, who among other things worked with her husband to bring the television show “Sesame Street” to Israel, died in 2010 at age 80.