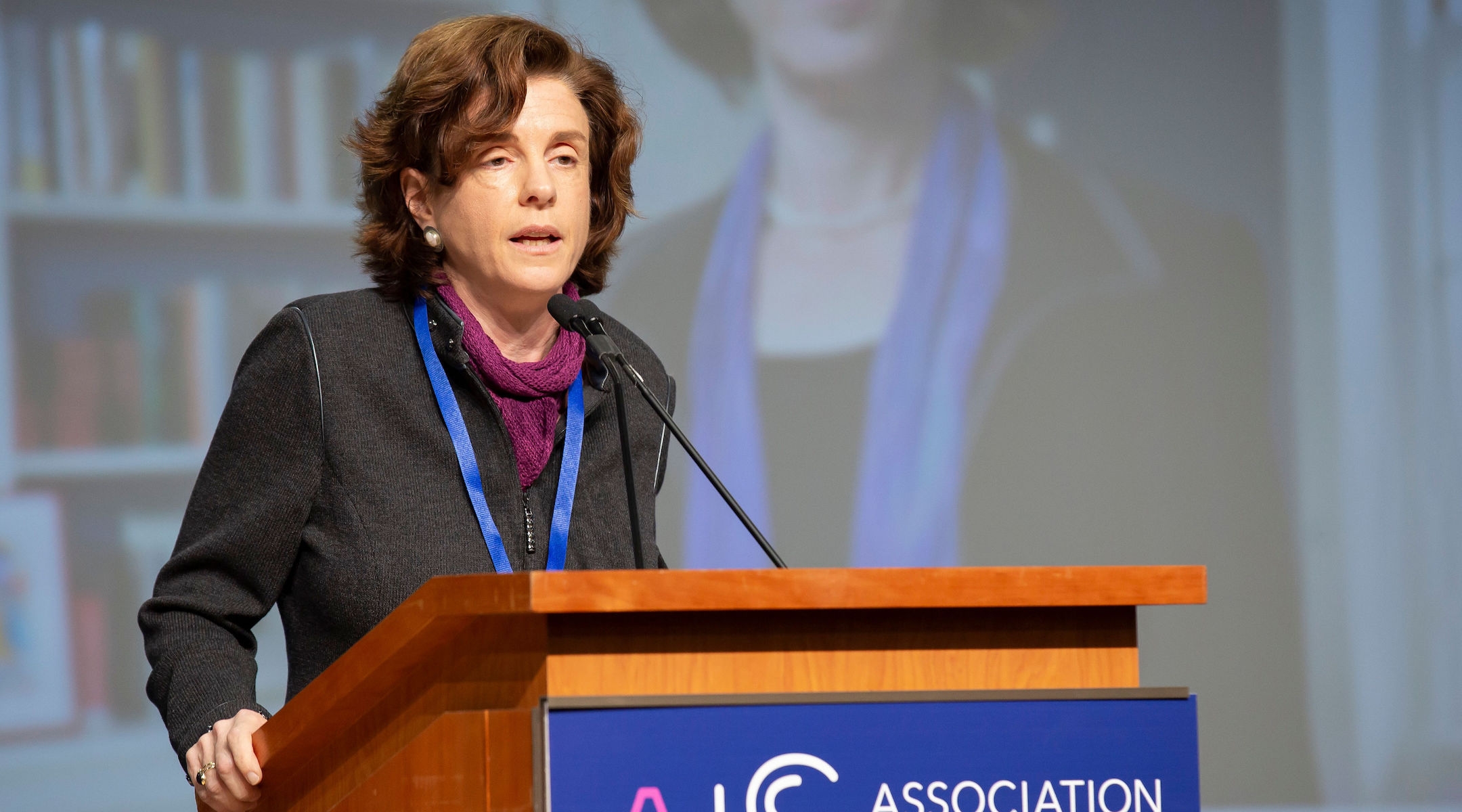 BOSTON (JTA) — Diversity and inclusion were among the hot topics at the 50th annual convention of the Association of Jewish Studies, where some 1,200 Jewish studies scholars gathered for a three-day conference that began here Sunday.

Fifty years to the month after a handful of scholars in the newly emerging field of Jewish studies held what became its founding conference at nearby Brandeis University, the now large and dynamic AJS returned to its roots.

“We are really happy to be back in Boston,” said Christine Hayes, AJS president. A professor of religious studies at Yale, Hayes said the organization has seen tremendous growth. “It reflects a robust field that encompasses so many different disciplines.”

The field’s expanding popularity can be seen in AJS’s membership, which grew from 47 in 1969 to more than 1,800 today. The AJS website lists more than 200 Jewish studies programs or departments and 230 endowed positions at North American colleges and universities.

Michael Meyer, now retired as a professor at Hebrew Union College in Cincinnati, was at the first AJS meeting 50 years ago. He told JTA that Jewish studies has flourished more than the early group anticipated. The small gathering included just one woman, the late historian Lucy Dawidowicz, and the one Israeli there doubted that American Jewish studies would ever come close to Israel’s scholarship.

That growth is pegged to the rise of Jewish pride after Israel’s victory in the Six-Day War in 1967 as well as interest in the Holocaust and the more general rise in identity politics and scholarship. The expansion of opportunities for women also helped: In 2013, at least half of AJS members were women, as compared to just over 10 percent in the late 1970s, according to a study on the AJS website.

This year’s conference, held at the Seaport Hotel & World Trade Center, boasted 215 sessions, with 19 concurrent sessions throughout each of the three days, according to Warren Hoffman, the group’s executive director. The topics range from rabbinics and Jewish mysticism to Yiddish, film and the arts, to literature, race, anti-Semitism, the Holocaust and Israeli politics.

For its golden anniversary, AJS welcomed one of its own, Maud Mandel, the new president of Williams College, and a widely regarded scholar of Jewish studies, as a keynote speaker.

Mandel, the first woman to lead the elite college in the Berkshires, attracted a large crowd for the plenary session talk on Sunday, “Diversity, Equity, and Inclusion: Notes from Jewish History and Campuses Today.”

“The field of Jewish studies can be a key to transforming campuses and building a diverse and inclusive educational system,” said Mandel, a scholar of 20th-century religious and ethnic minorities in France.

Mandel spent her academic career at Brown University where she was a professor of history and Jewish studies. In 2014, she was appointed dean at Brown. Last summer, she began her new position as president of Williams, the fourth Jewish president of the liberal arts school, she said.

A fervent proponent of diversity, inclusion and equity in college life, Mandel noted that these goals are part of the mission of colleges and universities across the country as a way to open the doors to groups of students these institutions have traditionally failed.

Diversity and inclusion broadens the experience for all students, she emphasized. She drew a parallel between the subject of her own Jewish studies scholarship to underscore the point that diversity dramatically changes — and improves  the experience of the majority in society at large and on college campuses.

“This association helped drive that change,” she said. 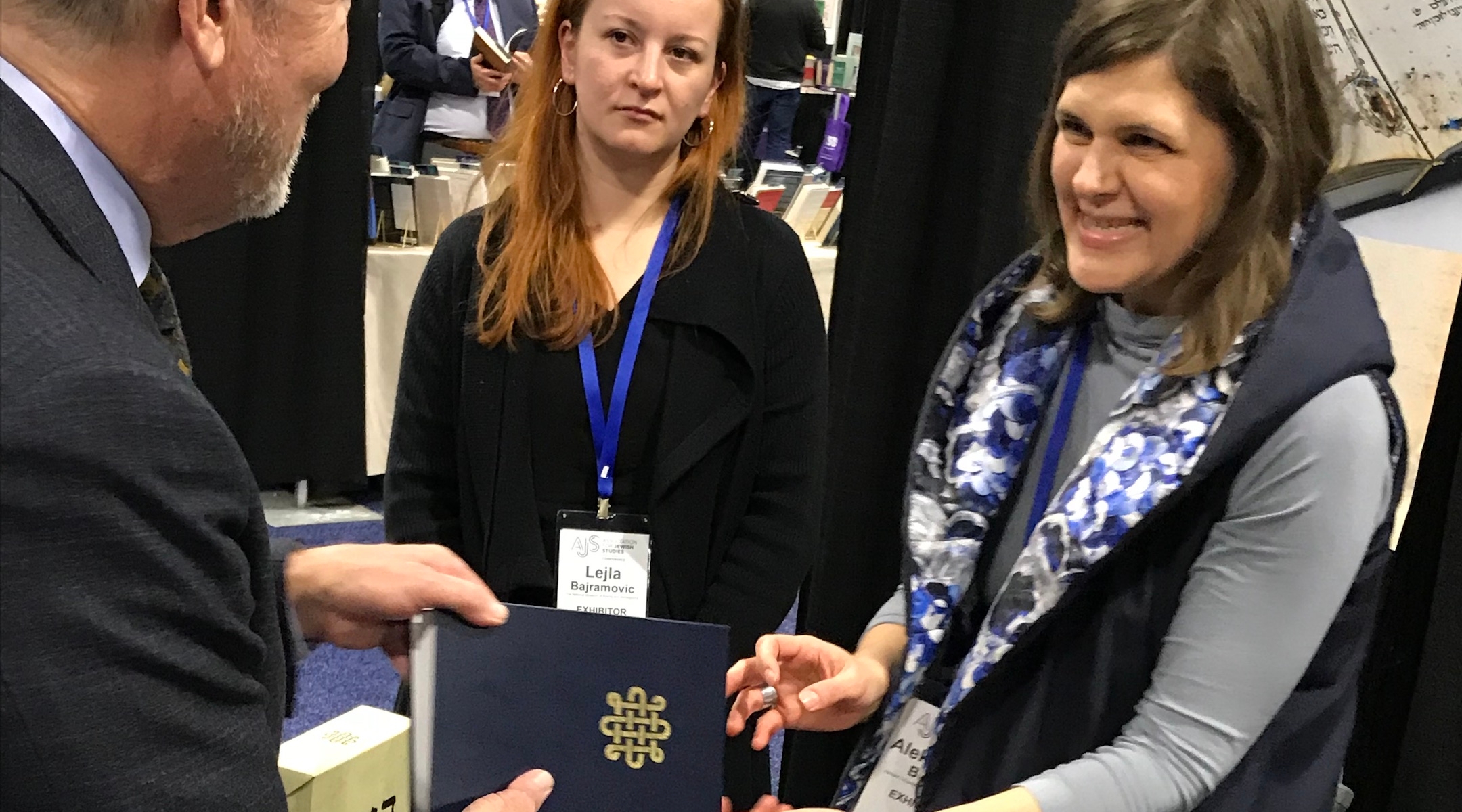 A new facsimile of the 14th-century Sarajevo Hagaddah was on display, and for sale, by the National Museum of Bosnia and Herzegovina in the exhibit hall at the Association of Jewish Studies convention, held in Boston, Mass., Dec. 16-18, 2018. (Penny Schwartz)

Among the emerging topics that have gained traction is an interest in Sephardic Jewry and transnational history — that is, cultural exchanges between Jews and other groups.

Darcy Buerkle, an associate professor of history at Smith College, said her course on the Holocaust has had to tackle modern manifestations of the hate it explores, including the Nazi march at Charlottesville, Va., and the shooting at the Tree of Life Synagogue in Pittsburgh that claimed 11 lives.

In a workshop, “Teaching the Holocaust in the Age of Trump,” Buerkle said that for the first time, she finds herself more aware of her own vulnerability and emotions in response to current events, while students are voicing their own reactions.

At Case Western University, Jay Geller has added material to his syllabus since Pittsburgh.

“The present climate is intruding into the course,” he said.

Still, demographers in one session warned scholars not to exaggerate the scope of anti-Semitism. Anti-Semitism at large and on college campuses is not as rampant as is widely reported, they suggested at a round-table discussion, “Anti-Semitism in Contemporary America.”

“The percentage of Americans who experience anti-Semitism would appear to be about 13 or 14 percent a year,” Ira Sheskin, director of the Jewish Demography Project at the University of Miami, told JTA after the session.

But the murders at the Tree of Life synagogue have jolted American Jews, the panelists said. That and other high profile, violent incidents give a sense that anti-Semitism is widespread.

What has happened in today’s political climate is that “people who are anti-Semitic have been emboldened by statements from the President,” and the ratcheting up of divisive rhetoric by others, said Sheskin.

Other highlights of the conference included the awarding of the 2018 Jordan Schnitzer Book Awards, funded by the Harold & Arlene Schnitzer Family Fund, which honored books on sacrifice in early rabbinic literature, the printing and material history of the Jewish Bible, right-wing Zionism among Polish Jews and conversion in Israel.