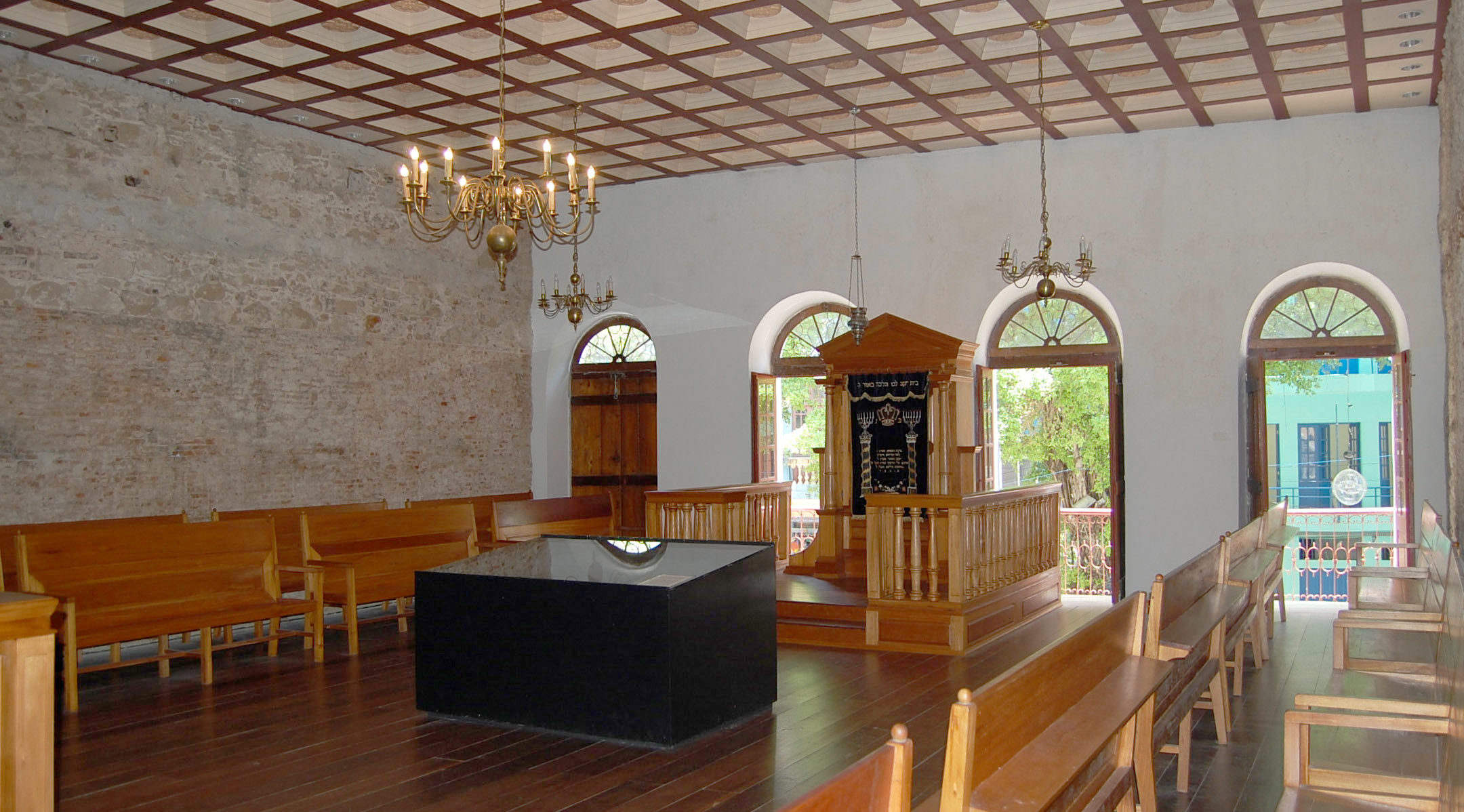 The interior of the Kahal Zur synagogue, once a large Orthodox establishment in Recife, Brazil, that was restored in 2002 as a museum and also contains a small egalitarian shul.(Wikimedia Commons)
Advertisement

The debris, left over from an overnight tropical storm, is not what’s worrying Scherb, a 22-year-old university student and volunteer dance instructor.

“I’m looking to see if it’s safe,” she said, walking briskly to a friend’s parked car after giving an Israeli folk dance class. “I’m afraid all the time of robbery, or worse. I plan my life so I spend the least amount of time on the street. We all do.”

It’s a way of life that Scherb, whose mother was robbed and who had witnessed a robbery on the street once, shares with many residents of this city. Recife, Brazil’s fourth largest metropolis with a population of some 1.55 million, was ranked this year as the world’s 22nd most violent city. It has a murder rate 18 times higher than New York and double that of Sao Paulo.

Like many young Jews from Brazil’s predominantly Ashkenazi Jewish community, Scherb says she does “not see a future” for herself here because of crime and the effects of this South American nation’s 2014 financial crisis. Coupled with government corruption and political instability, these factors are prompting record numbers of Brazilian Jews to leave their country.

Such crises, along with assimilation, have depleted many South American Jewish communities in recent years — especially the smaller ones outside capital cities.

Yet unlike many counterpart communities, Recife’s is not in decline — partly thanks to the embrace of Judaism by hundreds of locals whose Sephardic ancestors came here centuries ago from Spain and Portugal amid anti-Semitic persecution in those countries.

Since 2015, at least 400 people with Sephardic ancestry have undergone Orthodox conversions to Judaism in northern Brazil – the area where their ancestors first arrived from Europe. In the state of Pernambuco, whose capital is Recife, these individuals established two Jewish congregations that operate their own synagogues and feature holiday events, including  Passover seders.

In 2015, one group of returnees, the Recife-based Sephardic Association of Pernambuco, published its own Passover Haggadah — an 80-page book with prayers in Hebrew and Portuguese. Its cover features an illustration of people of various races attending a seder, some wearing traditional Amerindian costumes.

“Twenty years ago, the return to Judaism was a dream. Now it’s simply our reality,” said Jefferson Linconn Martins dos Santos, president of Recife’s Aboab de Fonseca synagogue, one of the two new congregations. Over the past decade, more than a dozen congregations like it have been established across Brazil’s north, each with its own spiritual leader and ritual slaughterer producing kosher meat.

This development is unfolding in parallel to record levels of emigration by Jews. In Israel, the number of Brazilian immigrants has more than doubled, from an average of 249 per year in 2005-2014 to 619 over each of the past four years. 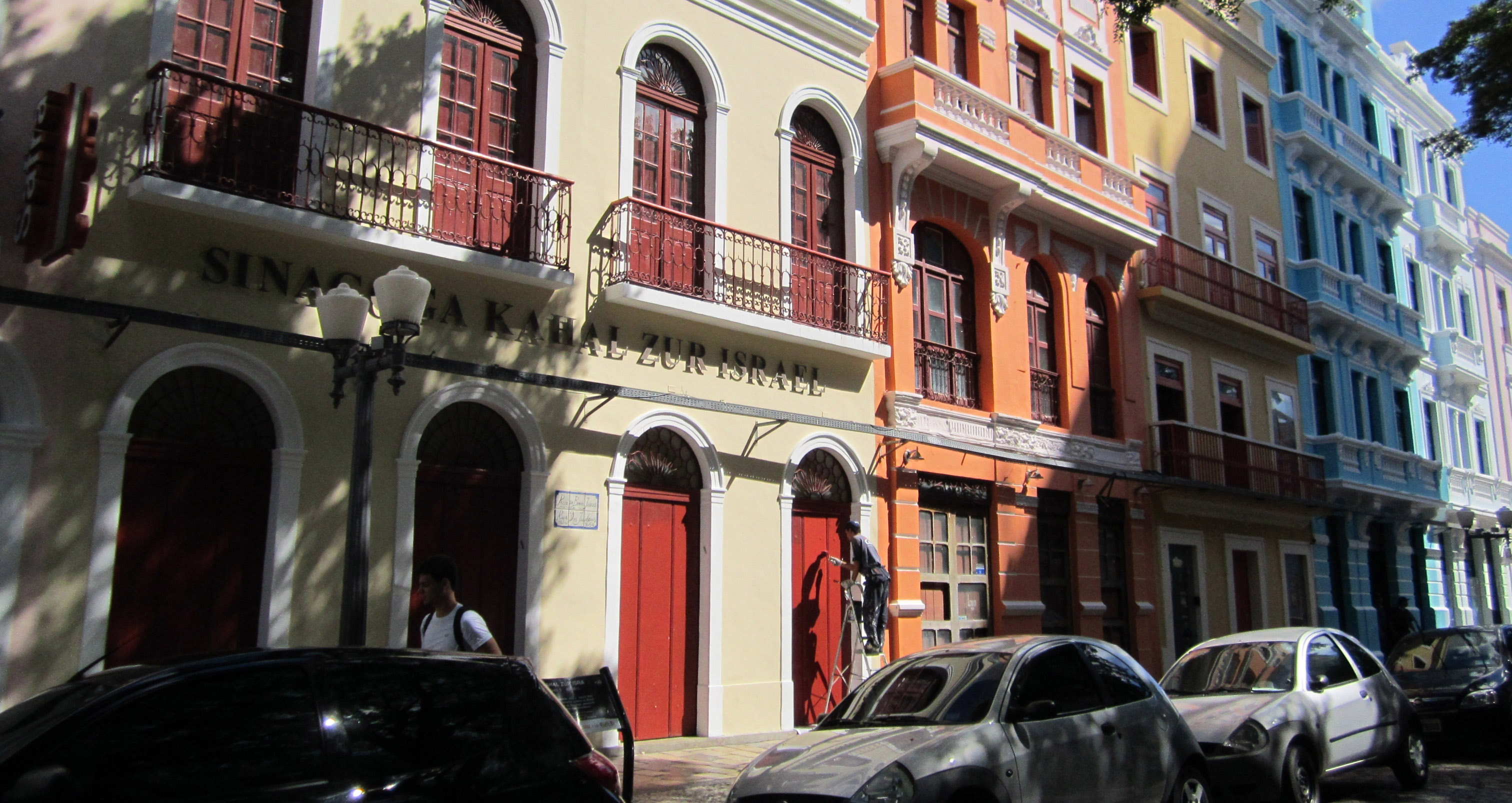 The facade of the Kahal Zur synagogue, which hosts a Yom Hashoah commemoration and other special Jewish community events. (Wikimedia Commons)

‘Children of the converted’

Members of the new communities call themselves “bnei anusim” — Hebrew for the “children of the forcibly converted” from Judaism to Christianity. It’s a reference to the long years of the anti-Semitic Inquisition, which spread to Portugal after its adoption as state policy by Spain in 1492, and to those countries’ colonies.

Pernambuco for a while had been a haven for many Portuguese and Spanish Jews because it was controlled by the relatively tolerant Dutch from 1630 to 1654. But when the Dutch left, their colony was taken over by Portugal, which enforced the Inquisition. Many Sephardic Jews fled with the Dutch to the Netherlands.

They even brought along with them furniture from Recife’s Kahal Zur synagogue — the oldest in the Americas – which they installed at Amsterdam’s Portuguese Synagogue.

The Jewish presence in Recife, a sprawling seaside metropolis crisscrossed by canals of brackish water, is so old that it may have even given the city its name. According to one theory, it originates in “ratsif” — the Hebrew word for wharf. The city, with 1,500 Jews, also boasts Brazil’s oldest Jewish school, the 100-year-old Moyses Chvarts school.

Some of the Jews fleeing Recife arrived in New Amsterdam, where they founded the first Jewish community of what later became New York City.

Whereas many Jews left by 1655, many others stayed and braced for life under the Inquisition’s yoke.

At first, those who remained continued to practice Judaism in secret, becoming crypto-Jews. But their families became Catholic as the centuries passed.

Still, in villages in northern Brazil, some Jewish customs have prevailed, including spring cleanings and covering mirrors for seven days at a deceased person’s home.

Some bnei anusim were prompted to investigate their ancestry because of these peculiar family customs. Others, like Daury dos Santos Ximenes, president of the Association of Sephardic Jews of Pernambuco, discovered their Jewish origins through genealogical research.

Many families in northern Brazil for generations have known of their Sephardic roots, said Haim Amsalem, an Orthodox rabbi and former Knesset member from Israel who has converted many bnei anusim. “But the advent of the internet and social media changed everything, it lifted the taboo.”

Some, like 55-year-old Simone Azoubel, learned of their Jewish ancestry from a dying grandparent. Her grandmother, Raquel, asked on her deathbed in 1999 to be buried with her ancestors at a Jewish cemetery — disclosing a secret that had stayed under wraps for two generations.

Her grandmother’s funeral at Recife’s Jewish cemetery led to Azoubel’s conversion. Azoubel says her family first fled Portugal to Turkey, arriving in Brazil in the 19th century. She and some of her relatives are now active members of the Jewish community of Recife. Many in Brazil have converted to Judaism under the supervision of Gilberto Venturas, an Orthodox rabbi, shown here with his wife, Jacqueline. (Courtesy of Sinagoga sem Froteiras)

Since 2016, Amsalem, a former leader of the Orthodox Shas movement, has traveled five times to Brazil, converting about 100 people on each visit. Amsalem’s converts completed a conversion process in Brazil under the supervision of Gilberto Venturas, another Orthodox rabbi. Many others have undergone Reform or Conservative conversions in northern Brazil.

The Amsalem conversions were the first large-scale series of conversions ever performed in Brazil. They followed decades of outreach work by the Shavei Israel group and by Isaac Essoudry, a Recife Jew who died last year and served as spiritual leader to many seeking to reconnect to Judaism.

Yet although the converts were recognized as Jews by Amsalem, Israel’s Chief Rabbinate does not recognize them as such because he “isn’t on the Rabbinate’s list of judges that may preside over a conversion,” a spokesperson told JTA.

Unfazed, Amsalem cited a 2016 High Court precedent in Israel that forced the state to naturalize under its Law of Return those Jews whose conversions were not recognized by the Chief Rabbinate.

“Their recognition is meaningless,” he said of the Chief Rabbinate.

Neither Amsalem nor the Chief Rabbinate are aware of any of his Brazilian converts seeking to immigrate to Israel to date, the rabbi and the spokesperson said.

Recognition for the bnei anusim remains an issue inside Brazil’s Jewish communities, too.

They do not come to the city’s Chabad synagogue, where some converted bnei anusim say they would feel unwelcome. Nor do they integrate easily with other communities, including the relatively receptive Reform one.

“Generally we’re at a phase where many bnei anusim feel most comfortable in communities made up of people like them,” said dos Santos Ximenes, the Sephardic association president.

Jader Tachlitsky, the spokesman for the Jewish Community of Pernambuco and coordinator of the Jewish Center of Pernambuco, which has a Reform rabbi, confirmed that the “situation is complex.”

“Various rabbis are converting bnei anusim and we don’t feel certain about all of them,” Tachlitsky said.

These complications and others “are to be expected given the magnitude” of the bnei anusim phenomenon, said Ashley Perry (Perez), president of the Israel-based Reconnectar organization, which aims to assist people in reconnecting with their Jewish ancestry, the Jewish people and Israel.

Despite the challenges, Perry said, bnei anusim populations generally “and especially in northern Brazil represent a development that can alter the history of the Jewish people.”

There are many millions of potential bnei anusim in South America, Perry asserted. Amsalem puts the number “at least a few hundred thousands.” 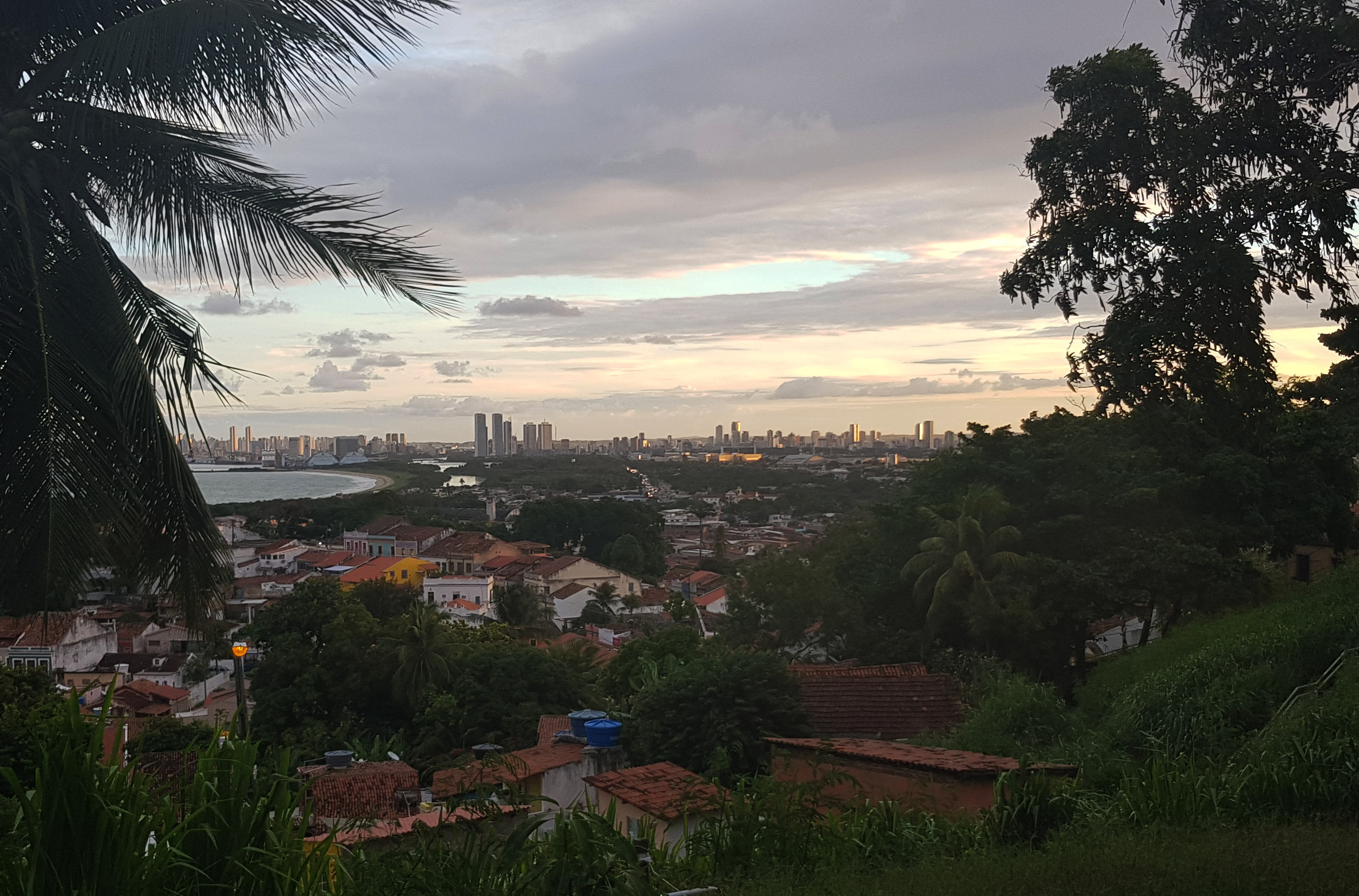 Recife, Brazil’s fourth-largest metropolis, has a population of some 1.55 million. (Cnaan Liphshiz)

But the gulf separating Recife’s bnei anusim congregations and its Ashkenazi ones is not due exclusively to religious reasons.

Yosef Manuel, who completed his conversion earlier this year, runs a small pet food store in Prazeres, an impoverished suburb of Recife. He decorated it with pictures of himself in Jerusalem and a large flag of Israel, which he regularly brings to soccer matches – including when neither team is Israeli.

Manuel said he “always knew the family had a Jewish identity.” But the need to convert arose 10 years ago, during his first visit to Israel and Jerusalem.

“I felt I knew I had come home, and needed to do some things to make it really my home,” he said. But Manuel also said he has no immediate plans to leave for Israel.

Among the guests at the ceremony celebrating his conversion to Judaism was his friend Evania Margolis, a local Ashkenazi Jewish businesswoman and member of the Chabad congregation.

“He was beaming. It was so moving it brought me to tears,” Margolis said of the ceremony.

“They say they are Jewish,” she said of bnei anusim. “I’m neither a rabbi nor a genealogist, but I think we should embrace the people who truly want to belong to our people.”

Manuel and his wife joined the Jewish Center of Pernambuco, where they attend services and events regularly, including the annual Yom Hashoah commemoration for Holocaust victims.

The community holds the commemoration and other special events at the historic Kahal Zur synagogue, which ironically is located on Good Jesus Street. Once a large Orthodox establishment, Kahal Zur slowly disintegrated before being restored in 2002 as a museum that also contains a small egalitarian shul.

For all the things that set them apart, Recife’s Jewish communities are nonetheless growing closer together over time, said Sonia Sette, the president of the Jewish Federation of Pernambuco.

“We don’t know the consequences of this phenomenon,” she said of the coming-out of the bnei anusim, “because we’re still seeing it unfold.” But amid assimilation, emigration and apathy by many local Jews in the Jewish community here, “I wouldn’t be surprised if in the future, the majority of the Jews here will be made up of bnei anusim.”