Why hundreds of Brazilian immigrants are flocking to this Israeli suburb 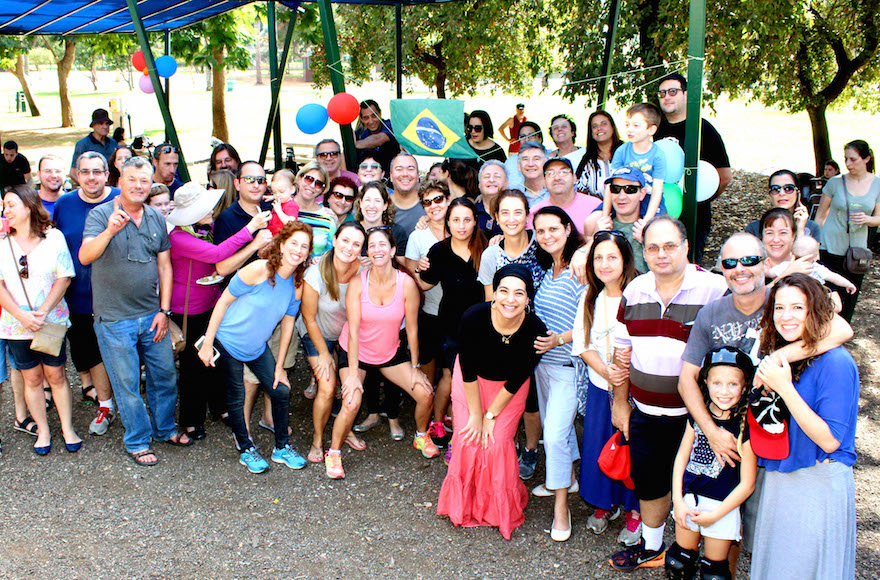 RA’ANANA, Israel (JTA) – This small, quiet town with an easy commute to Tel Aviv may not have Rio’s breathtaking landscapes and beaches. It also lacks the culture and nightlife that makes Sao Paulo famous.

And yet, sleepy Ra’anana — despite its tendency to almost completely shut down for Shabbat — has quickly become the primary destination among the Brazilians who are moving to Israel. Some 220 Brazilian families reside in this town of approximately 80,000 people, and it is now the the first choice among the 1,800 Brazilians who have started the aliyah process with the Jewish Agency for Israel, an organization that assists the Israeli government with immigration and absorption.

Today, from synagogues to schoolyards, the influx of Brazilians is palpable throughout Ra’anana. “You can hear Portuguese on every corner here,” said Oshra Sharvit, the director of the local ulpan, the state-subsidized school where new immigrants can learn Hebrew. Sharvit estimates that about one-fourth of her school’s students are from Brazil.

“Ra’anana has been labeled the chosen city by Brazilians,” Sandro Maghidman, a Brazilian immigrant who has lived in Ra’anana since 2012, told JTA.

Maghidman is an organizer of Kehila Yalla Chaverim, or Let’s Go Friends Community, a Facebook group with more than 400 members that’s a virtual meeting place for Brazilians living in Ra’anana and its environs. Online its members exchange experiences, meet for events and advertise services by and for Brazilians, who offer everything from walking dogs to making coxinhas, the deep-fried chicken croquettes that are beloved by Brazilians.

“The large group of Brazilian residents, both ‘vatikim’ [veterans] and ‘chadashim’ [newbies], plays a pivotal role to facilitate the integration of newcomers,” Maghidman said during a picnic this month at Ra’anana Park celebrating the one-year anniversary of the group. “Living in Ra’anana is a privilege.”

Last year, an all-time annual record of 700 Brazilians immigrated to Israel. That made the South American country the sixth-largest source of new immigrants to the Jewish state, after Russia, Ukraine, France, the United States and the United Kingdom. 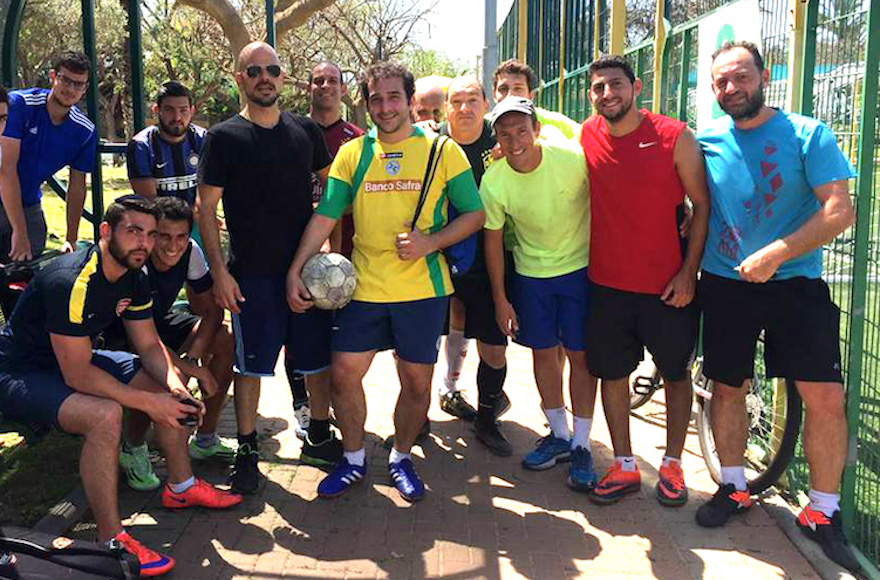 Violence is the most common reason that Brazilian Jews cite for making aliyah. The country has one of the highest homicide rates in the world– almost 60,000 murders a year, or 26 per every 100,000 residents, according to Igarape Institute think tank.

By contrast, Ra’anana is considered one of Israel’s safest cities.

“Here I walk on the street without looking back and with my earphones in,” said Denise Faldini, who moved to Ra’anana in 2016 with her husband and kids, ages 5 and 9. “My kids have learned that, yes, car windows can be opened.”

“Going back to Brazil is not an option for me,” added Faldini, who spent two years on heavy medication after she was abducted in her armored car in Sao Paulo and forced to withdraw her own ransom from an ATM. “I don’t want to die because of a cell phone and leave my kids orphans, nor bury them for the same reason. Life is not valued there.”

Michel Abadi presides over a network of 120 volunteers spread across Israel who support Brazilians before, during and after they immigrate. Abadi, a venture capitalist, arrived in Ra’anana with his wife and three kids in 2003. His parents and several cousins came years later, too, and his fourth child was born in Israel.

“It is a set of factors: political situation, street violence, economy, quality of public services, greater transparency of information about the Israeli reality among Brazilian Jews,” he said of the wave of immigration. “And even a snowball effect: the more Brazilians come, the more Brazilians they attract.”

These new immigrants are drawn to certain institutions – for example, the TALI school, whose Hebrew acronym stands for “Enhanced Jewish Studies.” Unlike most Israeli schools, TALI emphasizes Jewish and traditional values in the spirit of pluralism — similar to what most Brazilian Jewish schools teach. Israeli schools tend to divide the strictly religious and the purposefully secular.

“We wanted a school that offered a bit of religion, but one that was not religious, as well as a strong English curriculum,” said Lea Kaczemorska, whose two kids attend the school.

Another example of the growing community is Or Israel, a small but cozy 60-family Orthodox synagogue established in January 2017, led by Brazilian Rabbi Ivo Zilberman, who gives his sermons in Portuguese.

“It goes beyond being a meeting place for Brazilians to pray,” said Martin Teitelbaum, who serves as gabbai, the one who assists the reading of the Torah. “There is also the social and community side, where each member feels part of a large family.”

Then there’s that real estate adage: location, location, location. Ra’anana is centrally located — it’s less than 9 miles from Tel Aviv and is sandwiched between Herzliya and Kfar Saba. The three cities have the largest concentration of high-tech industries in the country – a backbone of Israel’s economy.

Ra’anana is also known as a hub for “Anglo” Jews, or those from English-speaking countries. The town was founded in the 1920s by a group of New Yorkers, and some 20 percent of its residents speak English as their first language. For Brazilian Jews who once dreamed of immigrating to the U.S. but found it difficult to do so legally, living in Ra’anana — with its upscale lifestyle, abundance of single-family homes and preponderance of English speakers — is the next-best thing.

But perhaps Nehama Efrati, manager of the absorption department at the Ra’anana municipality, summarized Brazilians’ interest in the city best: “The Brazilian aliyah matches Ra’anana with perfection,” she said. “Here they have both of the best: keep their culture and integrate. We respect both sides of this identity. We don’t want to be only blue and white, we want all colors.”