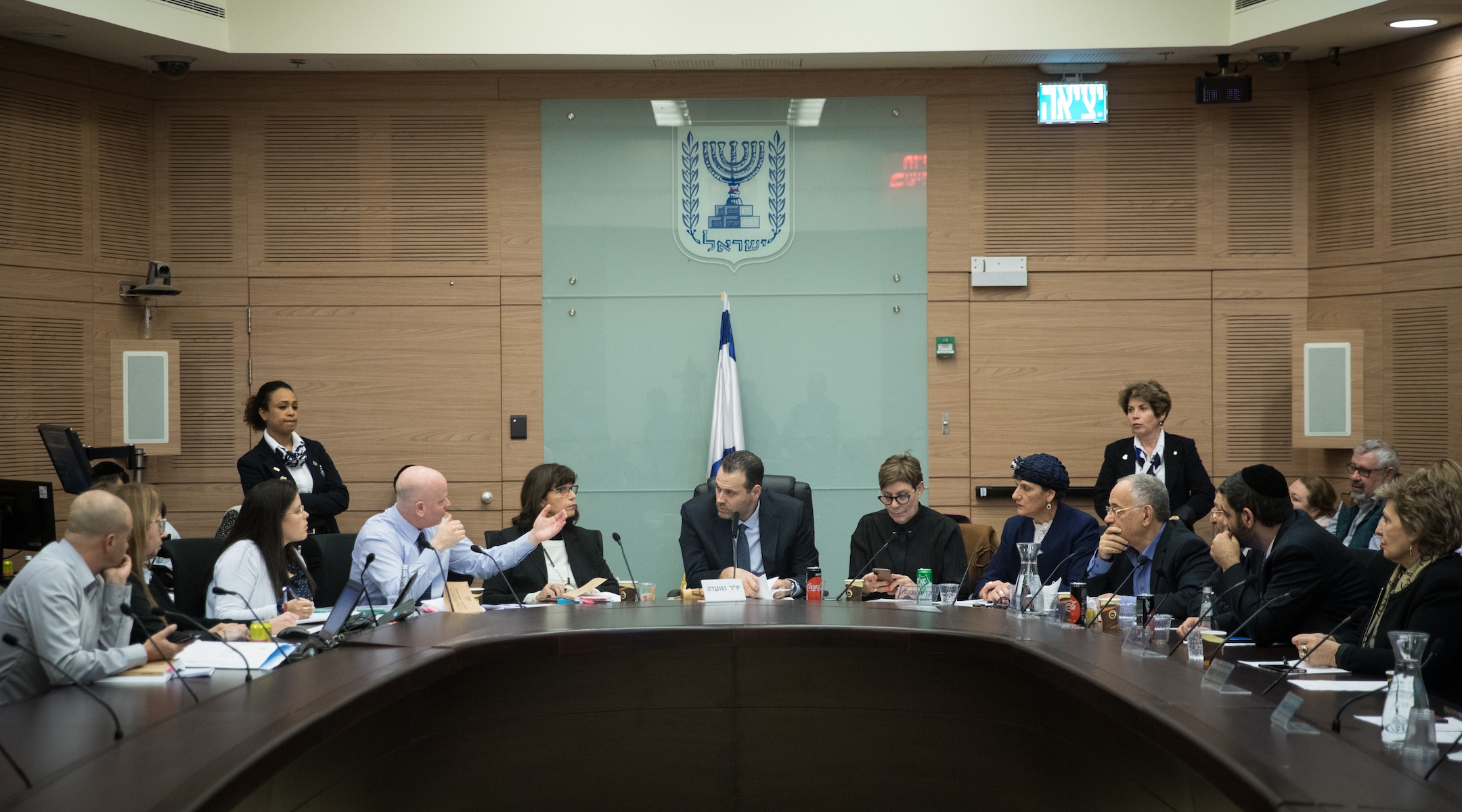 Miki Zohar, center, chairman of the House Committee of the Israeli Knesset in Jerusalem, chairs a vote on the split of Ayelet Shaked, Naftali Bennett and Shuli Muallem from the Jewish Home party to form a new party called The New Right, Dec. 30, 2018. (Yonatan Sindel/Flash90)
Advertisement

JERUSALEM (JTA) — Israeli politics looks like a big mess right now. In the past few weeks, three new parties have been launched and one party has kicked out a former partner. More changes are likely, too. It probably will get messier still if Prime Minister Benjamin Netanyahu is indicted before national elections are held on April 9.

The latest polls show 12 to 14 parties entering the new Knesset, many with the bare minimum of four seats. (The Knesset has 120 seats.) That would be up from 10 in the recently dissolved parliament. But expect those early tallies to change. The polls diverge widely in their counts, and more political surprises are surely in store.

For Brits and especially Americans, who are used to two-party politics, this fluid situation may seem like a weakness of Israeli democracy, but it is actually a sign of its strength. As they say in the tech world, Israel’s political condition is a feature not a bug.

Why is that? The games of musical chairs, with parties breaking away and others being fired, are not only being driven by political egos. That’s not to say no egos are in play. But the emergence of new parties and the shrinking of older ones are based on the notion that the Israeli voter is “woke” and caring. Voters have demands, opinions and desires, and the country’s politicians are trying to find out what they want. Hardly any voters are in the back pockets of politicos, who cannot take anyone for granted.

Most Israelis no longer vote based on family traditions, ethnic loyalty or rabbinic directives. They change their minds every campaign. Old and influential Zionist movements like Labor and the National Religious Party are losing ground politically, even though people still believe in the ideologies. Voters are making specific demands of their leaders and will not be loyal to a politician just because he or she heads a particular party.

These continuing splits have also shattered the traditional support networks of the old-line parties. Labor cannot count on the support that its “ground troops” from the Histadrut labor unions and kibbutzim used to provide. The religious parties used to be able to count on their B’nei Akiva youth groups and yeshiva students. Such networks are less important in an era of internet campaigning, and that traditional support is certainly not showing up on Election Day.

Not even the haredi Orthodox vote en bloc anymore. You would have thought that in a right-wing government they would get what they want. But they didn’t and in the end, there will be army conscription of young haredi men, even in a right-wing coalition.

Overall, the haredim hold fewer seats than their demographics would suggest. It is even possible that the Sephardic haredi party Shas won’t receive enough votes to gain Knesset seats. With right-wingers Naftali Bennett and Ayelet Shaked exiting the Jewish Home party, its remnants, primarily the old National Religious Party, also may not exceed the electoral threshold of four seats.

Other examples of such fracturing abound. Avigdor Liberman’s Yisrael Beiteinu party doesn’t represent Russian Israelis anymore. The Arab political parties are a more complicated matter, but on numbers alone, one would think they could hold more than 20 seats in the 120-member Knesset, as Arab Israelis represent 20 percent of the country’s population. But they are stuck in the low double digits.

By my estimates, only 20-25 percent of voters cast their ballots according to tradition, and they are clustered in the Likud and haredi parties. That is not a large enough percentage to be a game changer. The game changer is the other 75 percent. The Israeli political map in the 2019 election is different from 2015’s, which was different from those in 2012 and 2009.

This is not a sign of chaos. Rather it is a sign of a mature democracy and shows voters’ critical thinking about politics. They say, “I won’t vote for you just because I voted for you last time or because I was raised in your educational system.” There are no loyalties.

This direct influence of the individual citizen on politics is the real check and balance in our political system, especially as we don’t have a constitution and the courts are under attack. Even Benjamin Netanyahu, a great politician, has to seesaw back and forth among differing ideas. You cannot fool Israelis, and he knows it.

The argument that most of Israel’s Jewish population is right wing is a fact, but it’s a result of the current situation. It wasn’t like that always, and it won’t always be like that. Bibi won’t be here forever.

Even though Likud looks as if it is the last of the old-line parties to retain its deep core intact, the day that Netanyahu goes – and that day will come – Likud will implode as its historic rivals and partners have. He’s the only one holding the Likud together.

A governing coalition with many small parties is a problem. But I prefer a fragile system that is sensitive to the different opinions in society than strong leadership like a presidential system.

Israel’s politics may seem chaotic, but it gets things done. Innovative legislation of cannabis exports, child vaccinations and cigarette labeling made it through the system before the Knesset dissolved.

The two-party, presidential system in the U.S. has ground to a halt, the result of a polarized electorate and differing parties running the two houses of the Congress. America’s founders wanted governing to be difficult, but they also wanted consensus of a sort — seemingly impossible in a system that demands a stark choice between two sides of a divide.

Unlike Donald Trump, Netanyahu cannot just play to his “base.” The forming and reforming of factions means he is always in danger. You can argue that danger paralyzes him from acting, but it also demands more caution. In a society with a lot of friction, it gives more representative power to different parts of society, which is what democracy is about. I prefer that to some kind of political tyranny or a democracy that grinds to a halt.

A democracy is not tested by the power of a ruler but by the constraints it imposes on power. A prime minister in a parliamentary system must be open and listen. He or she has to make concessions, even to small parties. There will always be people who are unhappy, and here, virtually every political group is both happy and unhappy, depending on the moment.

One of the proofs of this is our high voter turnout. Nearly 72 percent of Israel’s eligible voters cast their ballots in the 2015 election, compared to 58 percent in the United States in 2016, a presidential year, and less than 50 percent in 2018 — itself the highest midterms turnout since 1914. Either Israelis are naive – they are not – or they think the system is working. Elections in Israel are an example of the trust people have in the political system, and the greater the noise and chaos, the greater the involvement and engagement.

Ariel Picard
Rabbi Dr. Ariel Picard is director of the Shalom Hartman Institute’s Kogod Research Center for Contemporary Jewish Thought.
The views and opinions expressed in this article are those of the author and do not necessarily reflect the views of JTA or its parent company, 70 Faces Media.