After Pittsburgh, some synagogues are more comfortable with guns in the pews 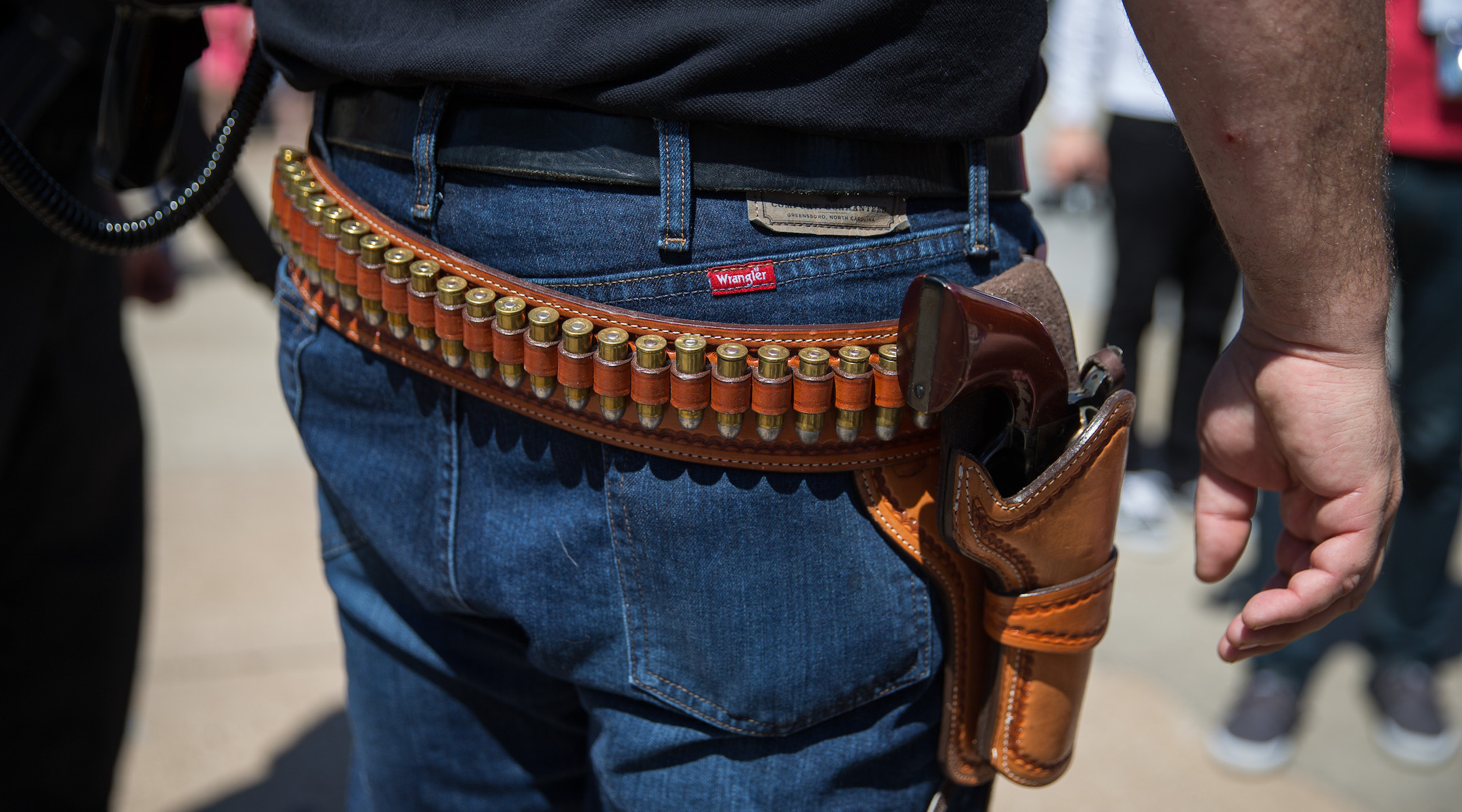 The Pittsburgh shooting has sparked a debate on bringing guns into synagogue. (Loren ElliottAFP/Getty Images)
Advertisement

(JTA) — On an average Saturday morning at the Orthodox Ohel Tefillah synagogue on Chicago’s North Side, about 10 percent of the men carry a handgun.

That number may seem high in a liberal city with some of the strictest gun laws in the country. But in the aftermath of the Pittsburgh synagogue massacre last year, Rabbi Moshe Revah expects it will grow. He wouldn’t be surprised if soon, 10 of the 40 or so men who pray there each week — 25 percent — will be packing heat.

“Definitely, Pittsburgh sparked the interest,” the rabbi said regarding gun ownership. “Originally it was much more of a taboo topic in the community. … Definitely people are much more understanding of the idea. There’s more and more problems and things happening.”

Following the Pittsburgh shooting, in which 11 worshippers were killed at Shabbat services by a lone gunman, a synagogue in another liberal bastion had the same conversation — and came to the opposite conclusion.

The Society for the Advancement of Judaism, a Reconstructionist congregation in New York City, decided that having more guns in synagogue would only create more danger. The synagogue even opted against an increased police presence so as not to push away Jews of color, who may feel threatened by police.

“We don’t believe guns will help the situation,” said SAJ Rabbi Lauren Grabelle Herrmann. “They would exacerbate the situation. In terms of congregants holding guns, it would create a culture of fear and promote a culture of guns when we believe access to guns should be more limited.”

The four major American Jewish denominations — Orthodox, Conservative, Reform and Reconstructionist — have called for increased gun control in some form. But in synagogues across the country, policies are far less uniform. Some ban guns from their buildings. Others are OK with their members carrying firearms in the sanctuary, as long as they are concealed.

Supporters and opponents of guns in synagogue who spoke to JTA repeated familiar arguments on both sides of the debate. Rabbis who don’t want firearms in their congregations said that more guns could mean more injury or death — inadvertent or not — as well as the growth of what they call an already problematic gun culture. 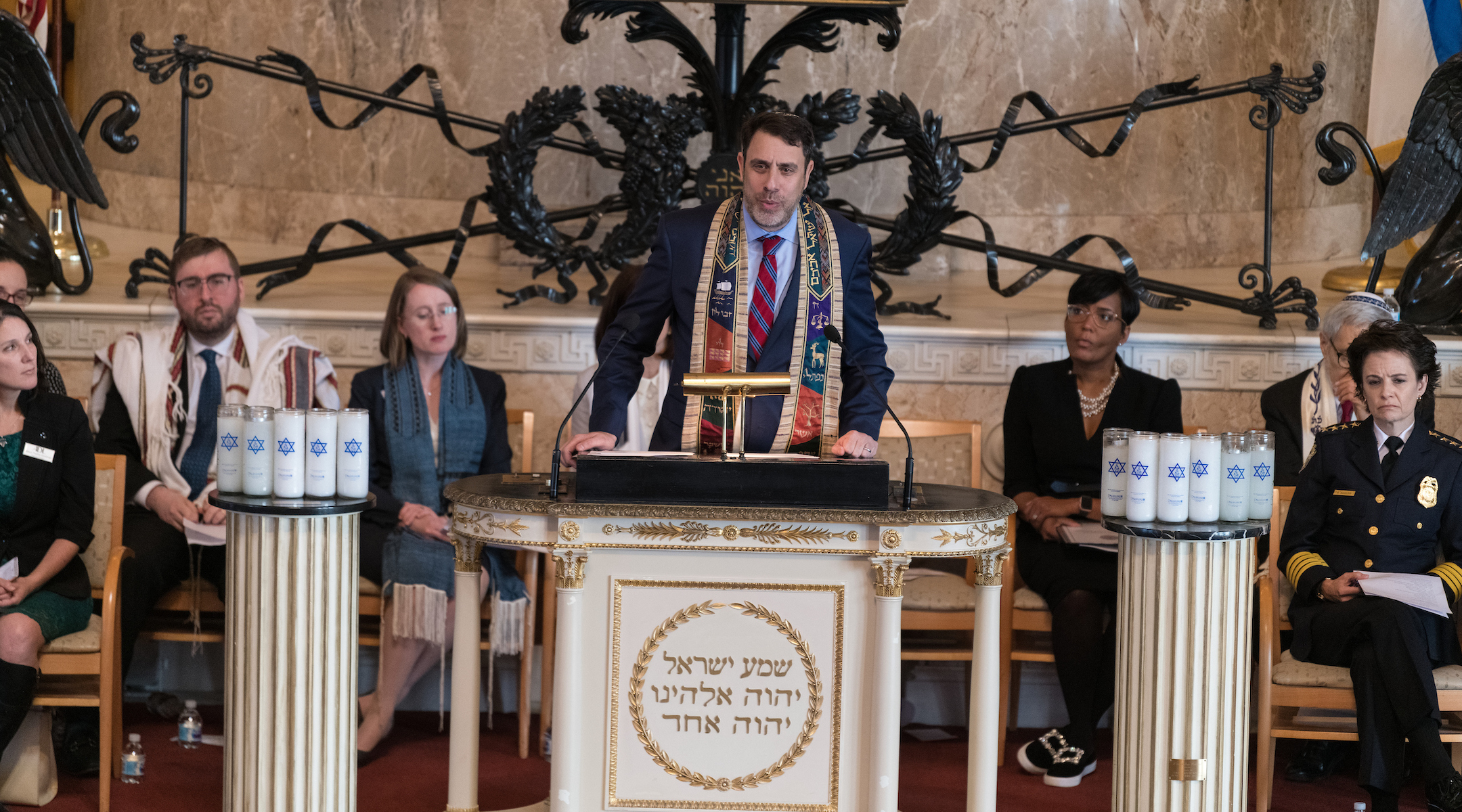 But supporters of armed congregants say that with responsible training, they are a necessary defense in an age of frequent mass shootings. Call it the good Jewish guy with a gun.

“We don’t want to be looked at as an easy target,” said Rabbi Stuart Federow of Shaar Hashalom, a Conservative synagogue in Houston that allows the concealed carry of handguns, but not open carry. “People understand when seconds count, the police are minutes away. They understand that they have to take personal responsibility for those they love. After Pittsburgh, members of my congregation are very alert when someone walks into the building.”

In Texas, where more than a third of residents own guns, the fault line isn’t between whether to allow or ban guns, but whether to allow open carry as well as concealed guns. Congregation Shearith Israel, a Conservative synagogue in Dallas, also bans open carry but not concealed carry. Rabbi Ari Sunshine said that he assumes some congregants bring guns to synagogue, and that in the Lone Star State, a blanket prohibition on guns would not come up.

Elsewhere in the South, even where gun ownership rates are high, some synagogues have stricter policies. Temple Emanu-El of Myrtle Beach, South Carolina, requires individual members to apply for permission to carry in synagogue. The Temple, a Reform congregation in Atlanta, instituted a ban on guns in synagogue six years ago. Its rabbi, Peter Berg, is an outspoken advocate for gun safety measures, frequently speaking with state officials along with delegations of his congregants or groups of interfaith leaders.

“Thousands and thousands of people have died every single year, and this is something where there are simple changes we can make to create a safer environment that does not infringe on the Second Amendment,” he said. “I feel passionately that this is a religious issue because people are dying and because we have turned the worship of guns into idolatry.”

Berg’s interest in the issue was partially sparked by his time as a rabbi in Texas more than a decade ago. One Saturday, an elderly congregant who was a police officer accidentally dropped the handgun he was carrying and shot his own daughter in the foot.

That same story is partly why Rabbi Sharon Brous of Ikar, a Los Angeles congregation, said she would not allow a congregant with a gun in the building. Brous added that Ikar has professional, armed security, and that the congregation re-evaluated its security protocols after the Pittsburgh shooting.

“We believe and know that more guns make us less safe,” said Brous, who has also been active in a rabbis’ movement against gun violence. “I’m not willing to risk the safety of the people in the room so someone who carries a concealed weapon can do so.” 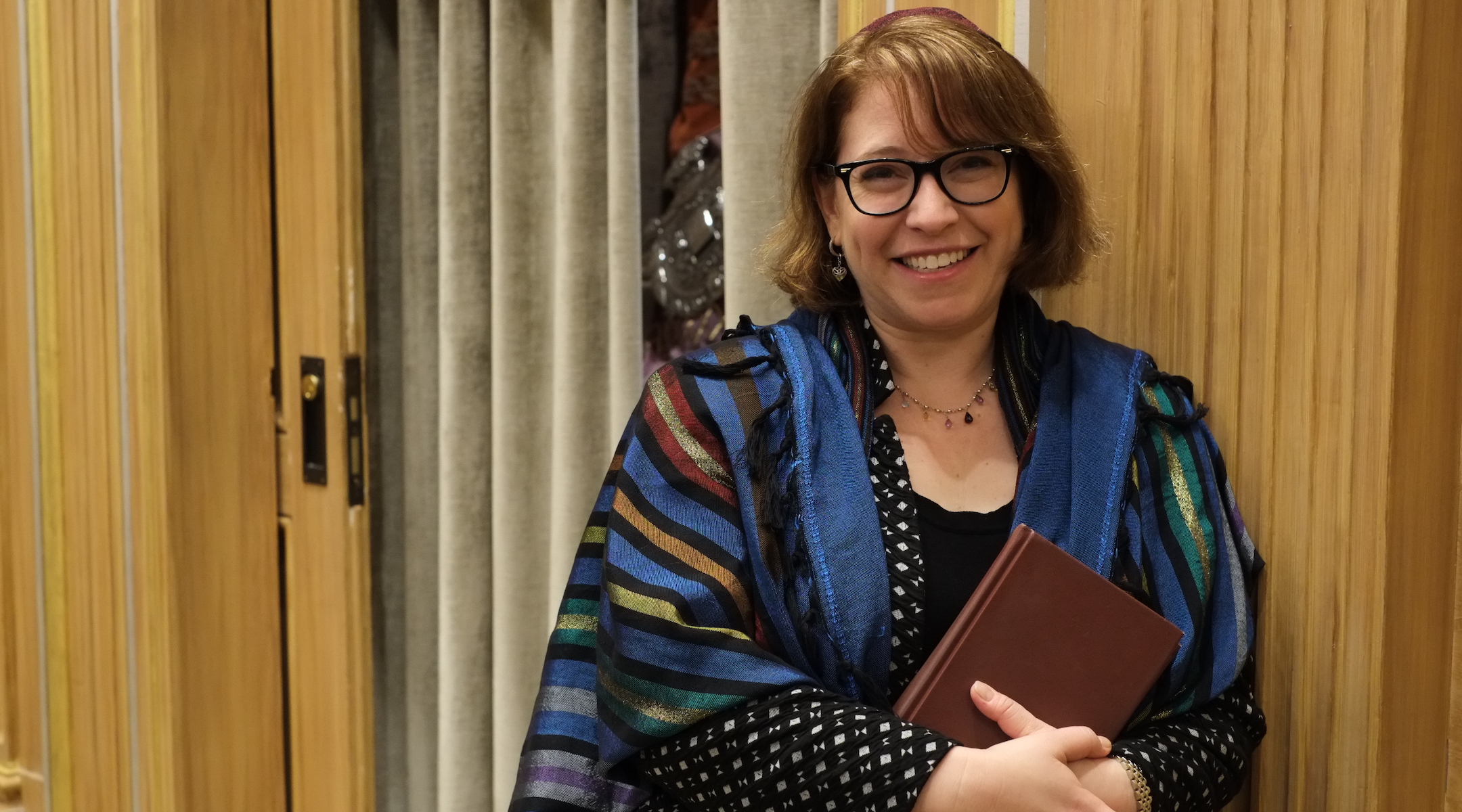 Rabbi Lauren Grabelle Herrmann of the Society for the Advancement of Judaism in New York City does not feel comfortable with guns in her synagogue. (Courtesy of Herrmann)

Michael Masters, the executive director of the Secure Communities Network, an umbrella organization that provides guidance to Jewish institutions on security procedures, cautioned against relying on laypeople to provide security in life-or-death situations. His organization encourages institutions to hire armed guards, if possible, and to stay in close touch with local law enforcement.

He noted that in the Pittsburgh shooting, four police officers who were highly trained were injured and unable to immediately stop the shooter.

“We have to ask ourselves, when four highly trained, capable members of law enforcement are cut down by an offender, what is the likelihood of how well prepared others are to address a similar situation?” he said.

But some synagogue-goers disagree and say they can serve as a second line of defense in case armed security is unable to stop a Pittsburgh-style shooter. Although Jewish law prohibits igniting a fire on Shabbat, Revah, the Chicago rabbi, explained that carrying a gun is permitted in certain circumstances in order to deter threats.

For some, carrying a gun comes with political considerations as well as safety concerns.

Eli Casper, who attends an Orthodox synagogue in South Florida, bought his gun the day before Election Day in 2016 because he was “concerned that Hillary Clinton was going to win and seriously constrict my right to carry a firearm.” His rabbi is supportive of his bringing the gun to synagogue, said Casper, explaining that he makes sure his gun is completely concealed in the sanctuary so as not to scare anyone.

Everyone who spoke to JTA and advocated concealed carry in synagogue added that armed congregants need to be well trained, beyond the minimum legal requirements for handgun ownership. Fred Kogen, a doctor and mohel in Long Beach, California, who runs a Jewish shooting club, Bullets and Bagels, said that training should go hand-in-hand with support for those who bring guns.

But the lack of support is why even Kogen doesn’t bring his gun to his Reform synagogue. He’s never raised the issue with the clergy, but given the national Reform movement’s position on gun control, he believes his gun would be unwelcome.

It was a struggle, Kogen said, just to get the congregation to upgrade the locks on its classrooms after Pittsburgh.

“At a certain point, you bang your head against the wall and your head hurts,” he said. “The wall is not going to move.”