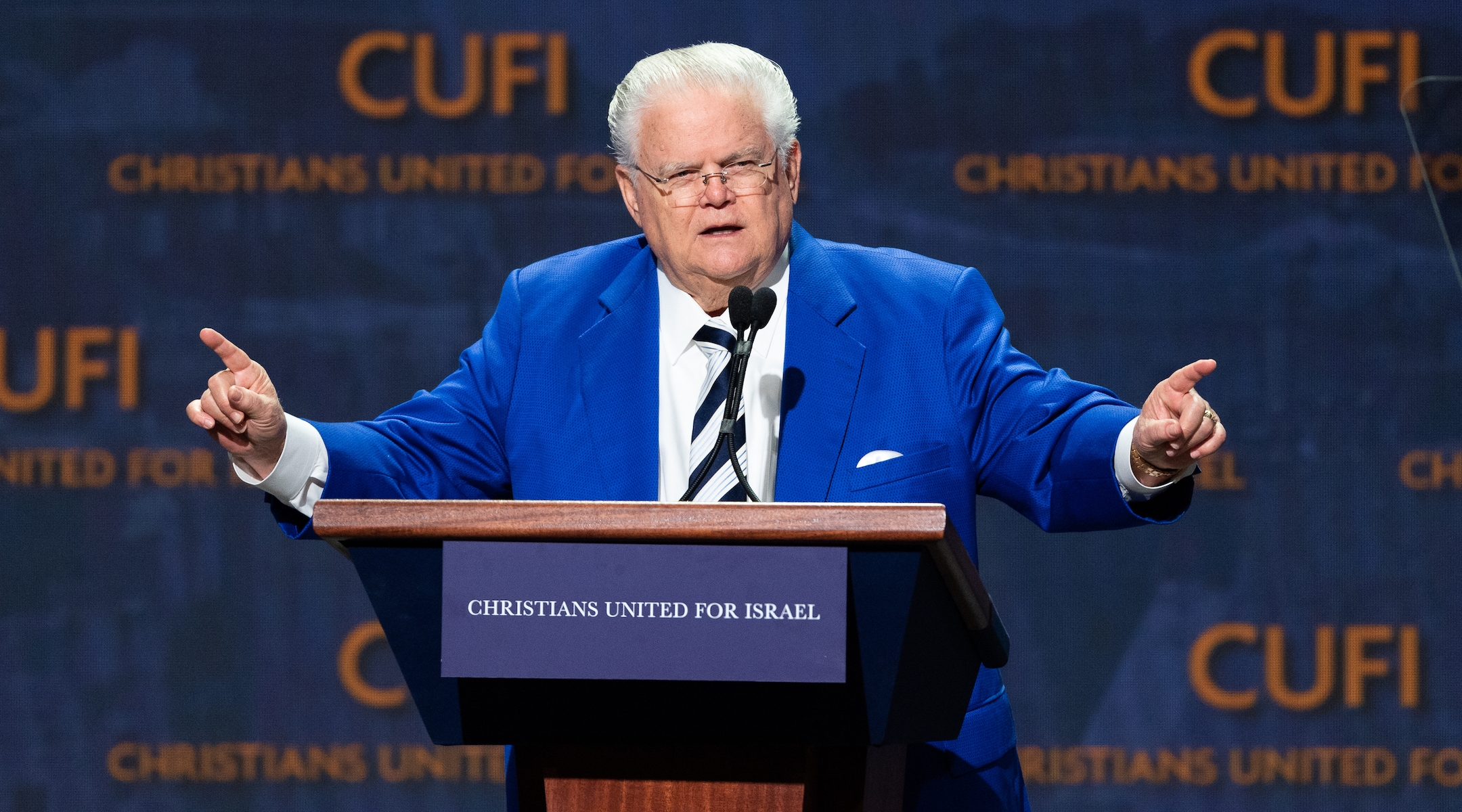 WASHINGTON (JTA) — Christians United for Israel is no stranger in this city: It has become a key player in recent years in Congress’ passing of pro-Israel legislation, often of the kind favored by the more hawkish elements of the pro-Israel community.

It’s that reputation that this week brought a small delegation to the capital — but not to advance any new bill. Instead, two top officials were meeting with officials of one of the country’s most liberal Jewish communities in order to assure them that whatever else they’ve heard, CUFI is on their side.

Reaching out to Jewish communities is hardly unprecedented for the organization: CUFI instructs its new chapters to make local federations their first stop, coordinate pro-Israel strategy and reassure local Jewish communities about their intentions. Jewish groups are historically leery of evangelical support for Israel, and CUFI insists that its love for Israel is not about converting Jews or bringing about the end times, a theology of small “millennialist” groups that mainstream evangelicals say they have long disavowed.

“We tell our leaders, ‘get to know your federation director,'” Shari Dollinger, the group’s co-executive director, said in an interview Tuesday between meetings. “We want the Jewish community to know us.”

But this quickie tour by Dollinger and Pastor Victor Styrsky, its outreach director, had two unusual wrinkles: Their pitch is tailored specifically toward reassuring liberal Jews that the organization was not an enemy, and it was coordinated by the local Jewish community relations council, although CUFI footed the bill for the short trip.

Ron Halber, the executive director of the JCRC of Greater Washington, said diminishing support for Israel in the broader community, exacerbated by infighting among pro-Israel groups, led him to organize the fly-in.

The D.C.-area community is among the nation’s most liberal, Halber said, ensconced in an area — including the District of Columbia and its Maryland and Virginia suburbs — that overwhelmingly vote Democratic.

Dollinger said that the increased boldness of anti-Israel activity has drawn CUFI closer to pro-Israel groups.

“The Jewish community in the United States needs the support of Christians to secure the U.S.-Israel relationship in a way it didn’t 10-15 years ago,” she said.

Halber said that CUFI, with nearly 6 million members, could not be ignored.

“CUFI is a tremendous political force in America,” he said.

CUFI counts as members people who sign up for its action alerts, as opposed to Jewish pro-Israel groups, which usually count as members those who have paid a fee or donate to their coffers.

Nonetheless, it has proven formidable in rallying support for its policies through its action alerts. It helped pass last year’s Taylor Force Act, which slashes funding to the Palestinians as long as Palestinian authorities continue to compensate Palestinians who attack Israelis. Last month, followers unnerved Sen. Rand Paul, R-Ky., with newspaper ads and phone calls after he placed a hold on $38 billion in defense assistance to Israel. Paul, who had complained about the CUFI onslaught, on Tuesday voted to advance a version of the legislation for the new Congress.

Dollinger and Styrsky are meeting with Jewish officials, donors and clergy across the spectrum over two days. The meetings are off the record, and the liberal participants are abiding by the rule: JTA canvassed a number of the groups and none would confirm the meeting.

Halber, Dollinger and Styrsky said the meetings went well, and were launched with Strysky explaining that CUFI represented evangelicals who are not interested in converting Jews or bringing about the end times. CUFI’s founder, Texas megachurch Pastor John Hagee, has argued in evangelical forums for formally dropping policies that have alienated Jews.

That was the easy part of the messaging — CUFI in its 13 years of existence appears to have largely succeeded in making the case that it rejects theologies that Jews in the past have found toxic.

“Thankfully, for the most part, we’ve moved past that,” Dollinger said.

What persists among liberal pro-Israel groups, however, is wariness of CUFI’s alliances with the broader American right wing, particularly in an era where the majority of Jews feel alienated by the rhetoric and policies of President Donald Trump.

CUFI embraces pro-Israel policies that the left wing of the pro-Israel community have said are counterproductive, including the Taylor Force Act, which targets Palestinians who doves say are Israel’s best chance for a peace deal. CUFI also supports far-reaching anti-boycott legislation on the state and federal levels that civil libertarians and liberal Jewish groups say impinges on freedom of speech.

Hagee, too, has been lacerating in his rhetoric, especially during the presidency of Barack Obama, who remains popular among Democrats. Hagee accused Obama of being anti-Israel.

Styrsky said that he hoped Jewish groups would look beyond those particulars and focus on the broader shared affection for Israel.

At the CUFI summit held here last summer, he said, “98 percent of congressional representations had pre-set meetings with us, both sides of the aisle. We find common ground because it’s Israel and Israel only.”