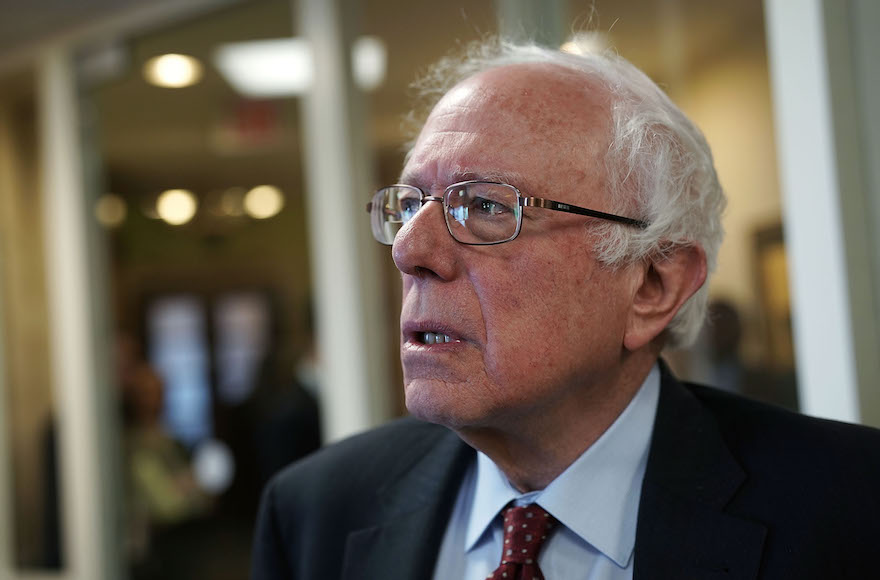 (JTA) — Sen. Bernie Sanders apologized Thursday to female staffers on his 2016 presidential campaign who said they were harassed by male co-workers.

The apology followed a Politico report saying that Sanders’ former Iowa campaign manager and adviser Robert Becker forcibly kissed a young campaign worker and has been accused of similar harassment by other female campaign workers.

Becker, 50, also was named in a $30,000 federal discrimination settlement with two former employees, Politico reported. The political magazine said it viewed the settlements but that the two employees are restricted from talking about the case.

Sanders, a Vermont Independent who caucuses with Democrats, told reporters that he thanked the women “from the bottom of my heart for speaking out” and apologized to them, The Washington Post reported.

“When we talk about ending sexism, and ending all forms of discrimination, those beliefs cannot just be words,” Sanders said. “They must be based in day-to-day reality and the work that we do. And that was clearly not the case in the 2016 campaign. The allegations that I have heard speak to unacceptable behavior that must not be tolerated in any campaign or in any workplace.”

Becker, after overseeing the Iowa campaign, then helped lead the Jewish senator’s efforts in Michigan, California and New York as deputy national field director. He reportedly made an unauthorized trip to South Carolina recently to recruit staffers for a possible 2020 presidential campaign by Sanders and had contacted women whom he had allegedly harassed.

Sanders, 77, has yet to announce whether he will run, but Friends of Bernie Sanders, his principal campaign committee, said in a statement that Becker would not be part of any future campaigns.

In an interview last week with CNN — after female staffers requested a meeting to discuss the harassment allegations as well as pay disparities — Sanders apologized “to any woman who felt that she was not treated appropriately. And of course, if I run, we will do better next time.”

He said he was not aware of the allegations because “I was little bit busy running around the country trying to make the case.”

Sanders was the first Jewish candidate to win major-party nominating contests. He ultimately failed in his 2016 bid, losing the Democratic presidential nomination to Hillary Clinton. Donald Trump defeated Clinton in the general election.