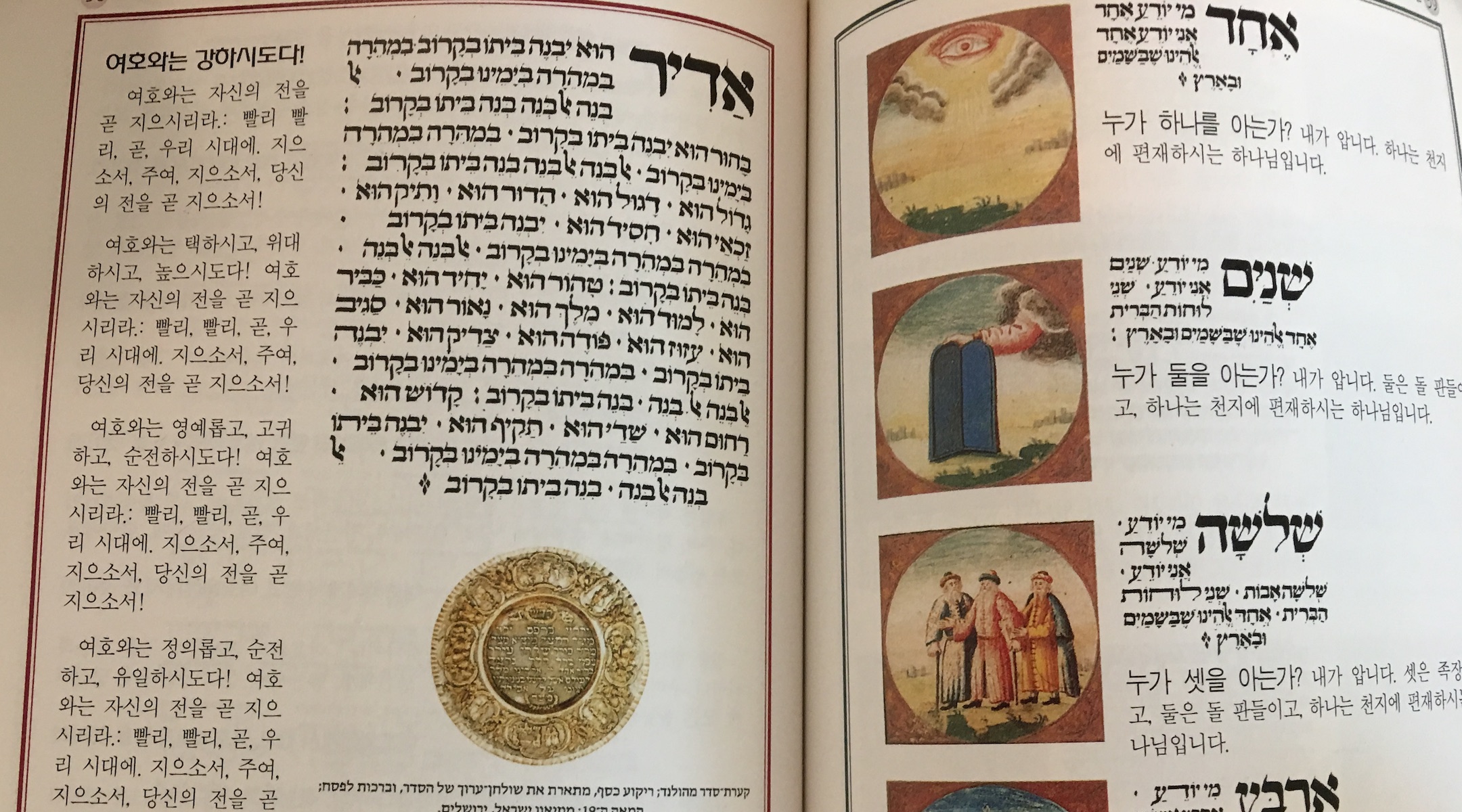 A Korean-language translation of the Haggadah, the book Jews read at the Passover seder. Korean translations of and commentaries on classic Jewish texts are common in a country where many revere Jewish wisdom literature. (Tim Alper)
Advertisement

The mother of two lives in study-mad South Korea, a nation where parents fork over a combined $17 billion on private tutoring every year. Children start early – 83 percent of 5-year-olds receive private education — and the pace keeps intensifying until, at age 18, students take the dreaded eight-hour suneung university entrance exam. Flunk the suneung and your job prospects could nosedive. Pass with flying colors and you may land a coveted spot at a top-ranked university.

“I hated the idea of sending my children to private academies, where teachers cram information into young heads with no thought for nurturing creativity,” Kim Hye-kyung said. “When my kids were younger, I read them books or took them out instead of sending them to academies. But as they grew older, I started worrying that their school results would suffer as a result of my decisions.”

Kim Hye-kyung was in this quandary when, by chance, she came across a book by a Korean author about what for her was a novel study method. It was chavruta, a method used by Talmud scholars in which pairs of students debate and ask one another questions based on ancient rabbinic texts.

“When I read about chavruta, I immediately felt an emotional connection,” Kim Hye-kyung said. “It was the educational path I’d been dreaming of. I thought my heart was about to burst with joy.”

Most South Koreans have never met a Jew. Aside from a small Chabad house in this capital city and a few informal groups of (mostly secular) Jewish expats, South Korea’s Jewish community is virtually nonexistent. As such, South Koreans know next to nothing about how Jews live, what they eat (and don’t eat) or what they believe.

However, there is one fact about Jews that just about every South Korean can recount.

“Jews account for just 0.2 percent of the world’s population, but 23 percent of Nobel Prize winners have been Jewish,” Seoul-based student Choi Jae-young related. “And despite all the time and money we spend on education, only one Korean has ever won a Nobel award. That irks many Koreans. It makes us want to learn Jews’ secrets.”

Some South Koreans think the key to unlocking such “secrets” can be found in Jewish approaches to education.

“Koreans don’t have to emulate Jewish belief systems,” educational researcher Seol Dong-ju said, “but we do need to copy the way Jews teach their children.”

The result is dozens of private chavruta-themed academies, with busy branches in major cities throughout the country, catering to everyone from toddlers to adults. Some make use of Korean-language Talmudic texts, while others follow entirely secular curricula. 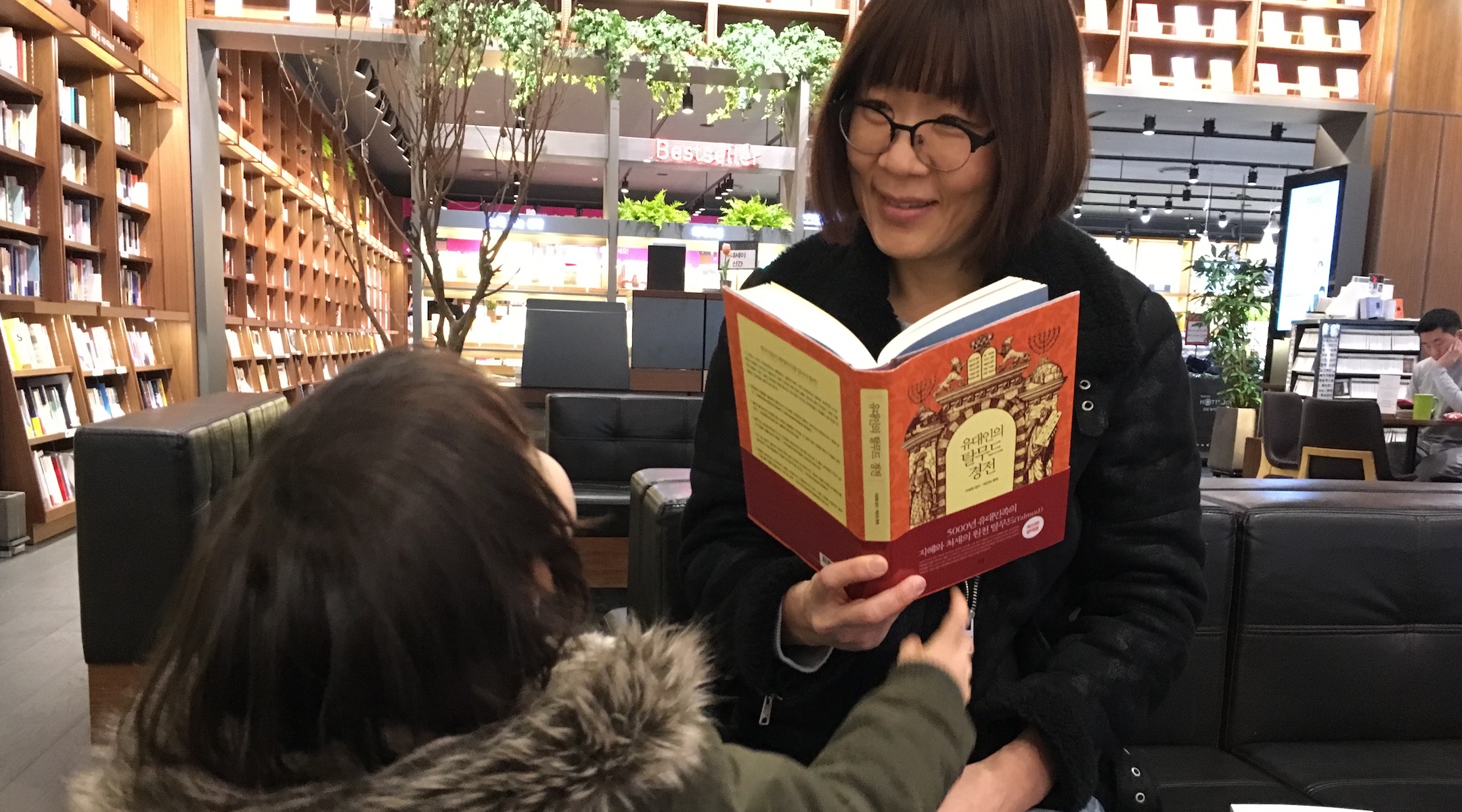 A South Korean woman and her child read Talmud-themed books at a Seoul bookstore. (Tim Alper)

Kim Jung-wan, who directs one such academy — the Havruta Culture Association — explains that South Korea’s Jewish education quest is over 40 years old. It began in the mid-1970s, when Korean translations of Talmud-inspired stories by Rabbi Marvin Tokayer, an American military chaplain stationed in Japan, first arrived in Seoul bookstores.

Tokayer’s stories were a runaway success. The Talmud, the vast Hebrew and Aramaic compendium of first millennium law and lore, effectively went viral in South Korea: In the decades since, hundreds of Korean versions of the Talmud have appeared, mostly deriving from English-language translations and commentaries. These range from picture story books for children to thicker, more ponderous volumes for adults.

But South Korean Talmud fever also sparked a highbrow fascination with Jewish knowledge – one that has spawned all manner of remarkable publications, including a Korean-language translation of the Haggadah, the book Jews read at the Passover seder.

And, as Kim Jung-wan explains, interest in the Talmud eventually led Korean academics to explore how Jews study religious texts. They began to learn about yeshivas, academies that are devoted to Talmud scholarship. South Korean consultants paid visits to some of Israel’s busiest Talmud study centers.

What they discovered inside sent their hearts aflutter: vast halls resonating with the clamor of heated student discussion, with teachers’ voices nowhere to be heard. Pairs of Talmud students — chavruta comes from a Hebrew root meaning “friend” or “companion” — locked horns in lively debate over texts, parsing its logic and debating a series of written questions posed by teachers.

For many South Korean thinkers, this was the “secret” they had been after since the 1970s: a learning methodology that added dynamism to book-based learning and removed the teacher as the focal point of lessons. 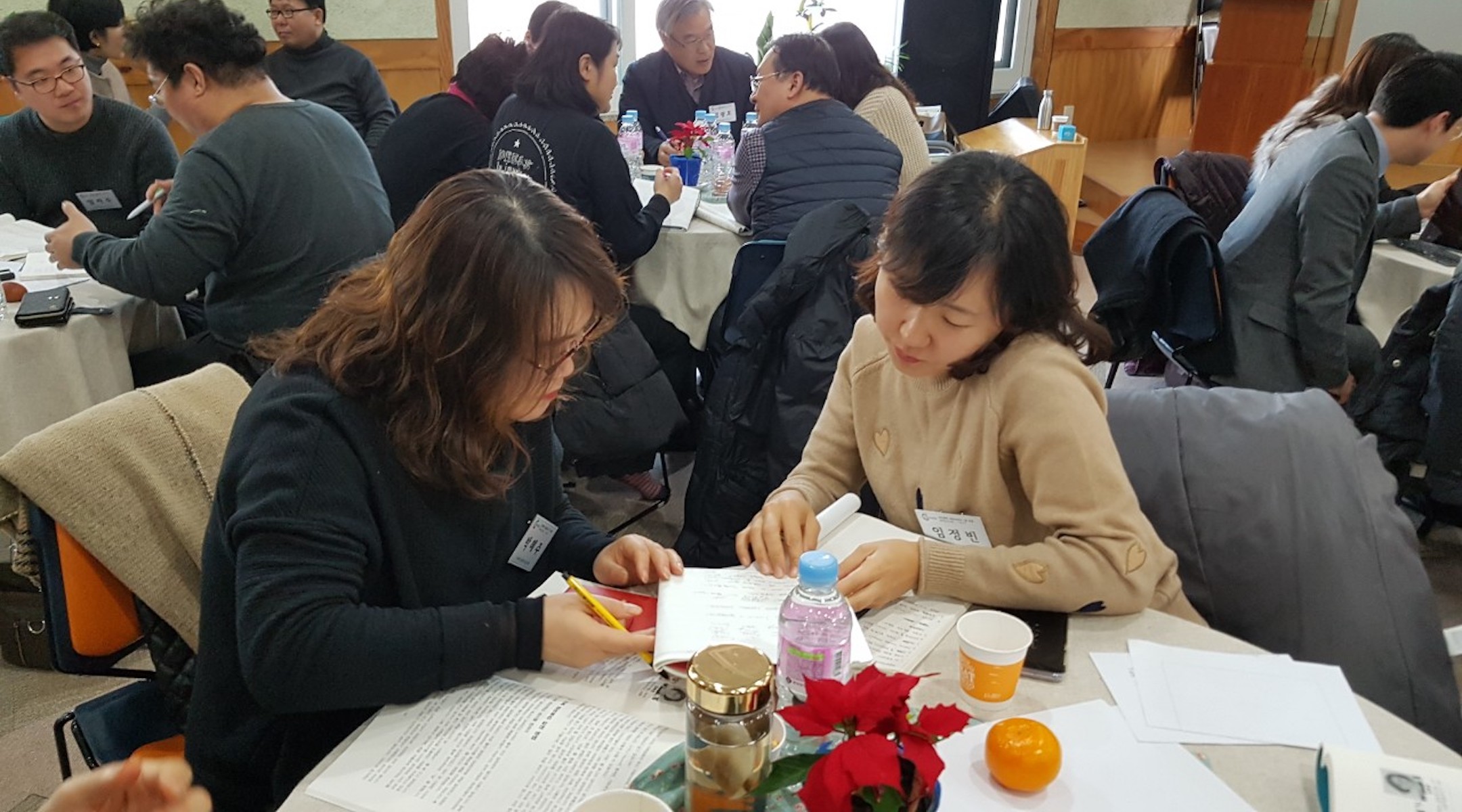 Kim Jung-wan’s own long chavruta journey began in 2001, when an academic acquaintance suggested he use the Talmud as a teaching tool for his son, then just a year old.

“I kept exploring  the subject. I was fascinated,” he said.

Kim Jung-wan went on to study Hebrew at the Israel Culture Center, an affiliate of the Embassy of Israel in Seoul.

“Eventually I began attempting to translate parts of the original Talmudic text into Korean using the Schottenstein English-language translation as a reference,” he said. “This month, I am heading to a yeshiva in Israel, where I’ll study for a month. It wasn’t easy for a non-Jew like me to gain admission, but I managed somehow.”

Skeptics urge caution, noting that South Korean education fads tend to come and go, especially in the ultra-competitive world of private academic institutions. Critics warn that while advocates are currently singing chavruta’s praises on TV talk shows, the phenomenon may prove to be another flash in the pan.

But the evidence suggests otherwise.

The methodology is gaining mainstream acceptance fast, moving from private academies into conventional public classrooms. In December, one of the largest teachers’ trade unions in the country, the Korean Federation of Teachers’ Associations, struck a memorandum of understanding with the Havruta Culture Association. The resulting partnership will see scores of regular schoolteachers learn how to initiate chavruta-style learning sessions.

“Many newfangled educational trends have come and gone here,” Lee Hyo-sang of the teachers’ federations said. “Most fall out of fashion after about five years after failing to deliver on their proponents’ promises. But chavruta is different. It has a history that goes back centuries.

“KFTA experts visited numerous chavruta academies and found that, rather than being overly quiet like most typical Korean classrooms, they all thronged with noisy discussion and debate. It’s a breakthrough in Korean classroom culture. It could find applications in schools, households and even businesses.”

Even preschoolers are getting in on the action.

Yoojung Kindergarten, a preschool in northern Seoul, recently added chavruta modules to its curriculum. Children listen to stories from the Talmud and then embark on chavruta-style peer discussions.

“We wanted to find a fun, lively classroom activity that would promote creativity, but also help with moral education,” principal Jung Geum-sook said. “Chavruta seems to tick all of these boxes.”

Parents also believe they can play a part. As she began to read more about the way Jewish scholars practice chavruta in yeshivas, Kim Hye-kyung started thinking of ways to adapt the same methodology at home.

She began with family readings of picture story books, encouraging her husband and children to ask one another chavruta-style questions at every step of the way.

“It opened up a whole world of unexpressed thoughts and feelings,” she said. “We discovered that the questions we asked had no right or wrong answers. The whole process became both enlightening and fun.”

Kim Hye-kyung has gone on to apply her home-chavruta methodology to a range of secular subjects including math, languages and science, and has ended up writing two popular manual-style books outlining her methods.

“Chavruta discussion-based learning is even effective for children preparing for exams,” she said. “It helps them form an emotional attachment to impersonal-looking study materials that would otherwise bore them to tears.”