Who was the one House rep to vote against a federal anti-Semitism monitor? A libertarian Palestinian American. 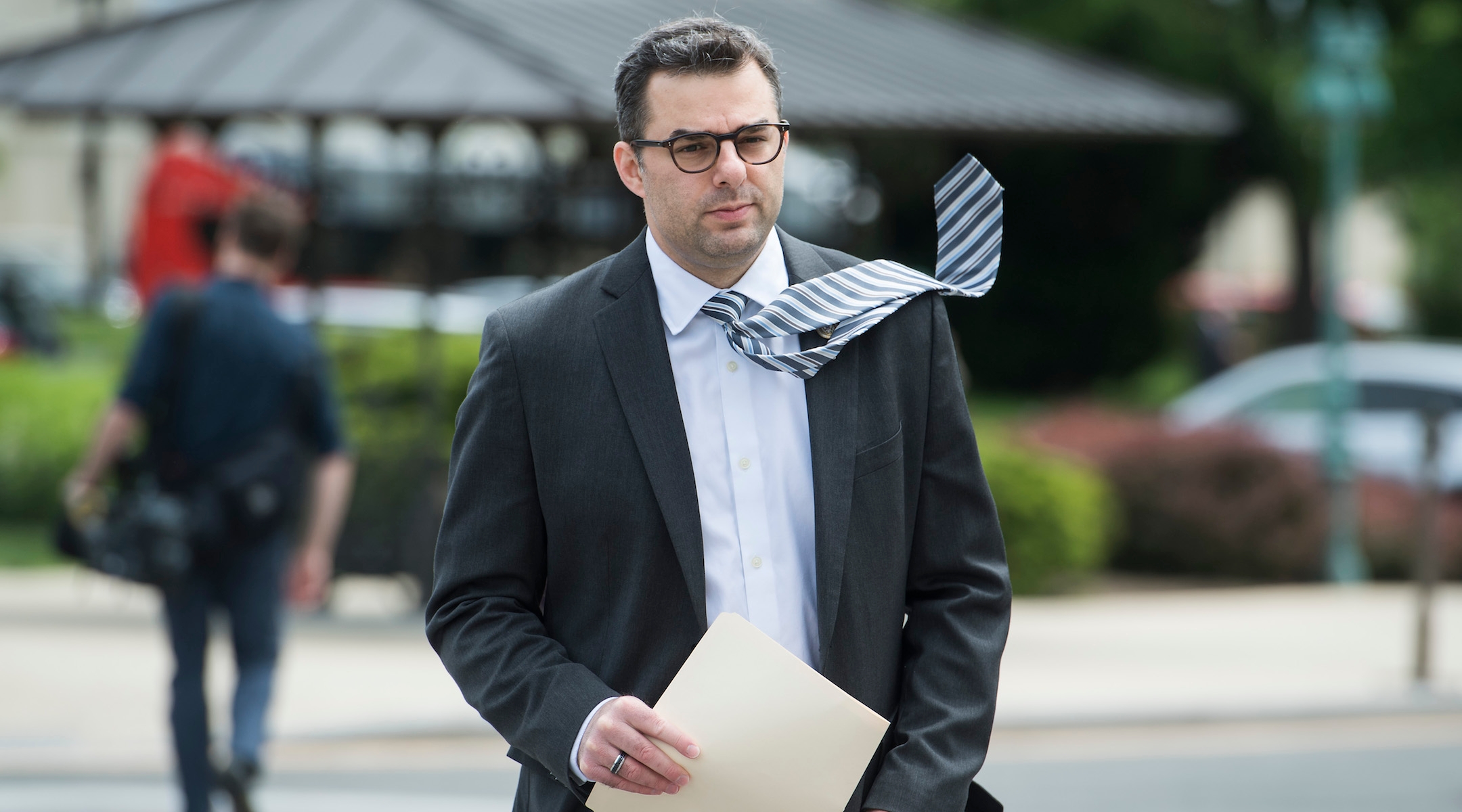 Rep. Justin Amash arrives at the Capitol before the House passed the Republicans' bill to repeal and replace the Affordable Care Act, May 4, 2017. (Tom Williams/CQ Roll Call)
Advertisement

WASHINGTON (JTA) — Chris Smith, the New Jersey Republican who is trying to push through a bill that would enhance the role of the anti-Semitism monitor, put out a news release minutes after it passed the U.S. House of Representatives and noted it was approved “overwhelmingly.”

Legislators love to describe support for their bills as “overwhelming,” but the word they love even more is “unanimous.” Only one vote kept Smith from tasting that victory, and it was by a fellow Republican: Justin Amash of Michigan.

Why was Amash, a traditionalist Christian libertarian and Palestinian American, opposed to the bill, which would set a 90-day deadline for President Donald Trump to fill a position left empty since the start of his term? JTA asked his office, as well as Amash directly on Twitter, and he was not forthcoming.

Amash is otherwise voluble on how and why he votes. Here’s a look at his record.

Amash, elected in the Tea Party wave of 2010, soon made a name for himself as a social media savant in painstakingly explaining every one of his votes on his Facebook page.

Somewhere along the line that commitment faded. Plenty of Amash votes go unexplained on his Twitter and Facebook feeds these days, including his anti-Semitism monitor decision. But he still engages plenty with followers on how and why he voted. Last week he was at pains, in polite replies to sometimes rancorous comments on Twitter, to explain why he voted against a bill favored by most other Republicans that would guarantee payment to workers furloughed during a government shutdown. Amash said that existing law already guarantees payment, and that the bill under consideration would encourage shutdowns rather than inhibit them.

… but has avoided explaining sensitive votes.

Amash’s unexplained vote against the anti-Semitism monitor is not the only occasion he has declined to discuss third-rail votes. In July, he was one of five Republicans who voted against an act that would enhance the U.S. response to emerging or potential genocides; no explanation was forthcoming. (The bill was named for Elie Wiesel, the late Holocaust memoirist and Nobel Peace laureate.)

Without an explanation, it’s hard to pin down what keeps Amash from voting for what are essentially anti-bias actions. Amash, when he first ran, was mentored by former Rep. Ron Paul, R-Texas, a perennial GOP presidential candidate and the party’s foundational libertarian, who favored a much lower U.S. profile overseas. Both the Wiesel act and Smith’s anti-Semitism act are undergirded by an outlook that favors a robust U.S. leadership role internationally.

Domestically, Amash has spoken out against bigotry, and he was among the first in his party last week to slam fellow Republican Steve King of Iowa for wondering why “white supremacist” has become an idea worthy of condemnation.

“This is an embrace of racism, and it has no place in Congress or anywhere,” Amash said on Twitter.

Amash also appears to put principle ahead of what others would call political slam dunks: Last year he was only one of two lawmakers to vote against giving the Congressional Gold Medal to Steve Gleason, a former NFL player suffering from Lou Gehrig’s disease.

“My threshold for awarding the Congressional Gold Medal is that the person’s actions were *uniquely* heroic in the annals of history, regardless of celebrity status,” he said on Twitter. “Most often, deserving recipients are war heroes or civil rights heroes.”

Last Thanksgiving, he thanked the minister who helped his family to come to the United States as Palestinian-Christian refugees in 1956. Amash said on Facebook that he was “thankful for the Wagoner family, who sponsored and aided my father’s family, Palestinian Christian refugees, to begin a new and wonderful life in America.‬” Amash has been honored by the (now moribund) American Task Force on Palestine.

Amash votes with the pro-Israel lobby on Iran issues, seeking to isolate Israel’s nemesis, but scores high with pro-Palestinian groups on issues related directly to the Israeli-Palestinian conflict. For instance, in 2014 he voted against additional funding for Israel’s anti-missile system, Iron Dome, during that summer’s Gaza war. He noted that he had previously backed funding for the system, but objected in this case because the bill did not include the “offsets” that conservatives usually demand when new funding is sought. In 2011 he described Israel as a “helpful” ally and said he was for a two-state solution.

“Do news organizations not fact check anymore?” he said on Twitter, linking to a news article that repeated the error. “I’m a Palestinian-American, and I’ve served in Congress for several years.” (JTA got it right.)

He’s proud of bucking his party.

This year’s Amash has voted against the back pay bill for furloughed federal workers, initiated eminent domain legislation that would make it tougher to build Trump’s wall with Mexico and been lacerating in his assessment of the president’s nominee for attorney general, William Barr. Amash pointed to Barr’s record during the George W. Bush administration of defending warrantless eavesdropping.

Amash has decorated his Facebook and Twitter pages with a quote from George Washington warning against the “baneful effects” of placing party above country. Over the weekend, when a progressive challenged Amash to work with the progressive  Democratic freshman Alexandria Ocasio-Cortez of New York, Amash replied “stay tuned.”

Amash joined forces with Jared Polis, the gay liberal Jewish Democrat from Colorado, in the last Congress in a bid to enhance restrictions on warrantless eavesdropping. Amash congratulated his friend when he was elected Colorado governor and said he regretted losing the only Democrat who was a member of the Liberty Caucus, the libertarian biweekly get-together launched by Amash.

“Congratulations to my friend @jaredpolis!” Amash said. “I’ll miss having you here in the House.”