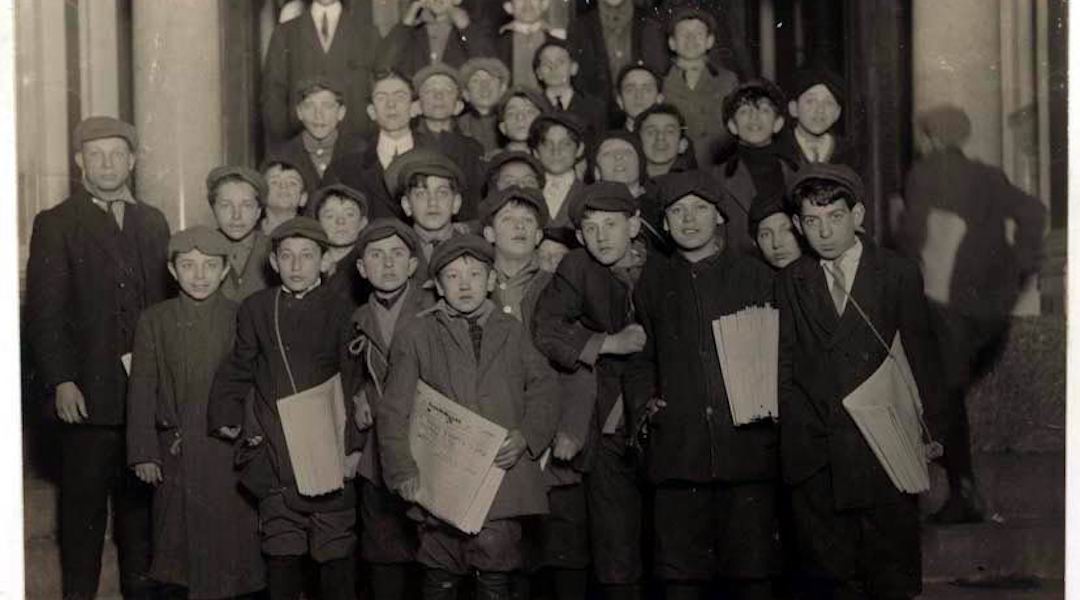 Newsboys for the Forward wait for their copies in the early morning hours, March 1913. (Lewis Hine/Wikimedia Commons)
Advertisement

NEW YORK (JTA) — My dad, who grew up in a time and place where his Judaism only marked him as an outsider, never really got my professional fascination with all things Jewish. That all changed when nearly 20 years ago I got a job with the Forward, the English-language offspring of the venerable Yiddish daily.

He recalled how the Forverts would arrive at his family’s home in New York state’s rural Orange County, one of his parents’ few links to the bustling Jewish community downstate and a window into a wider world.

“My father learned to be American from reading the Forverts,” Dad told me.

I came to the Forward in its second generation as a revived weekly dedicated to treating its subject matter — the Jews — with the seriousness and curiosity they deserved. Seth Lipsky had reimagined the paper as a quality Jewish journalistic enterprise a decade earlier. His successor, J.J. Goldberg, kept that spirit of inquiry alive, and as his managing editor I managed to work with an array of people far more talented than I — I am lucky to call more than a few of them my colleagues to this day.

Under Jane Eisner, the Forward remained an incubator and farm team for excellence in writing about North American Jewry in the post-immigrant, postmodern and, as some warn ominously, post-Zionist era. Some of the top Jewish media organizations — including the online magazine Tablet and 70 Faces Media, JTA’s parent organization — and at least one national magazine are led by its alumni.

The news last night that the Forward, already reduced to a monthly magazine, is stopping its print operations altogether, and that key senior staffers, including Eisner, are being laid off, hit all of us in the industry hard. Personally, many of those let go are my friends. Professionally, it is an ominous sign of the state of Jewish journalism.

But you don’t have to be a Jewish journalist to bemoan the diminution of a storied news enterprise. Love it or hate it (and many people do), the Forward represents the kind of serious conversation that Jews need to be having in turbulent times. Its reporters have held Jewish organizations and leaders accountable to the people they serve. Its opinion pages raise important questions that we might otherwise be reluctant to discuss in public, and give voice to those — Jews of color, Mizrachim, women, Jewish “renegades” — who too often are left out of the communal conversation. Most of all, it reminds us to think like adults, and put aside the kitsch and pablum that sometimes defines the Jewish discourse.

This week I took part in a Muslim-Jewish dialogue sponsored by the Shalom Hartman Institute of North America. The focus was the media’s treatment of our respective groups. I was reminded how lucky we are as Jews to have a mature and robust tradition of communal self-scrutiny. The Muslims in the room represented their communities’ critical thinkers, in all senses of that term, and more than a few quietly bemoaned the lack of outlets for an honest and often uncomfortable discussion of the challenges facing them and their coreligionists. Although the Jewish discourse can often be coarse, and the intramural fighting ugly, I am always proud as a Jewish journalist to be in the thick of it.

As an industry, Jewish journalism is on the ropes — weekly newspapers have been shrinking, many dying, for more than a decade, the result of the double jeopardy of economic and ethnic upheaval. Readers don’t expect to pay for the news they consume, and advertisers have fled to a cheaper online space where size is often all that matters. Jewish ethnic ties are famously frayed.

The Forward hopes its new digital strategy will help it survive these changes, but ultimately a journalistic enterprise is only as good, and as healthy, as its people. I wish the Forward, its staff and its alumni only good things. The Jewish world needs them. And if you doubt that, or are gloating over the Forward’s financial woes, you are arguing for a community that cannot discuss its most pressing issues honestly. You are trusting professional and volunteer stewards of multimillion-dollar nonprofits — your money, in other words — to police themselves. You are okay with tuning out political and ideological views with which you don’t agree. You are trusting the Jewish story to outsiders, and will not have the answers when others confront us with their versions of the truth.

The Forverts taught my Jewish immigrant grandparents how to be American. The revived Forward taught all of us how to think Jewishly in an era of assimilation and acculturation.

I hope a new Forward, and all of Jewish journalism, can rebound to teach us how to argue with one another, learn from one another and love one another.