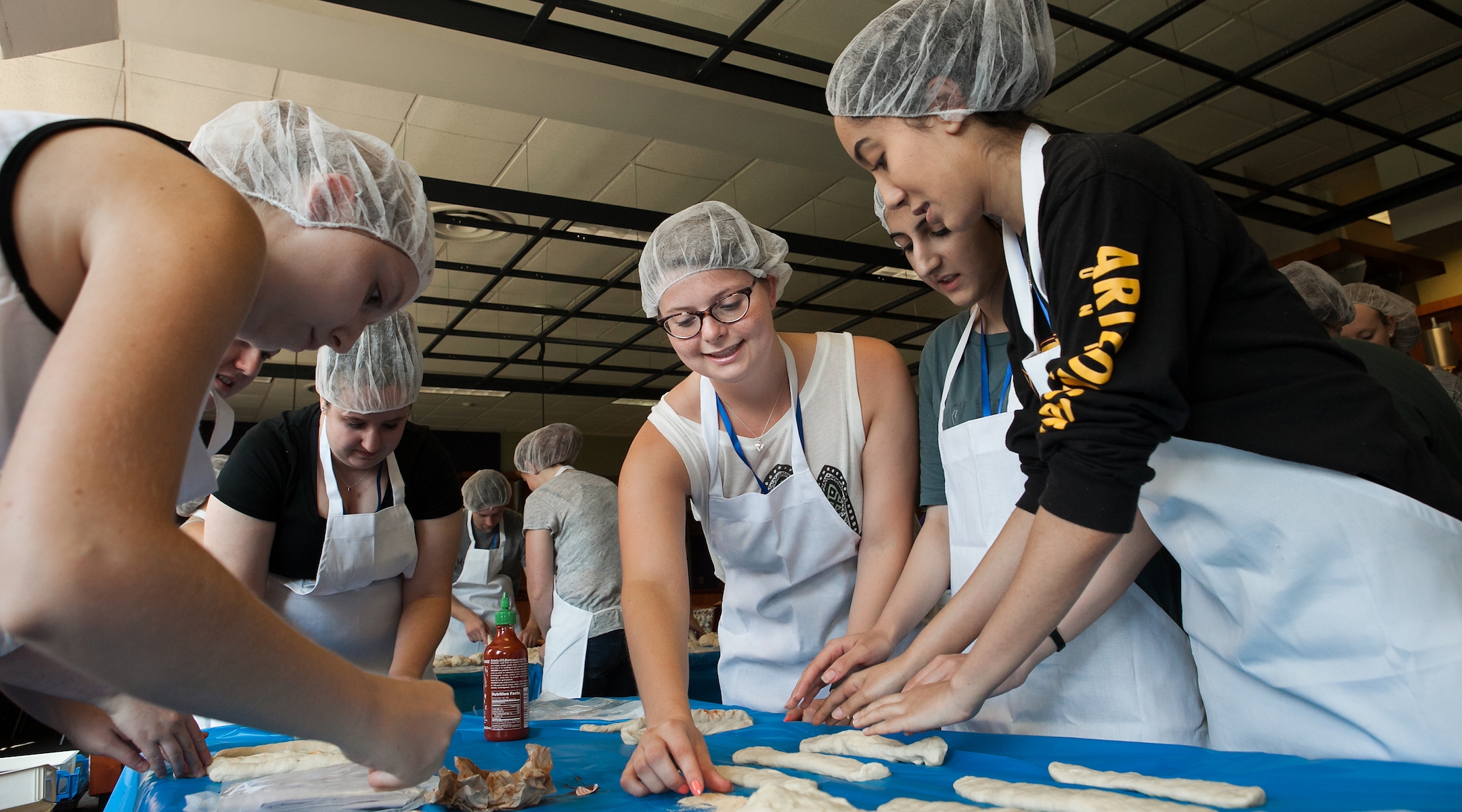 Rachel Gross had never heard the term “food insecurity” before she took a class on food politics at Vanderbilt University in Nashville.

Now a medical school-bound junior, Gross learned that food insecurity — defined by the U.S. Department of Agriculture as a lack of consistent access to enough food to live an active, healthy life — was a significant problem in that Tennessee city, and that some nonprofits in the area were working to address it.

Gross was even more surprised to learn that food insecurity existed among students at Vanderbilt, a top-20 university where tuition runs nearly $50,000 per year.

“It’s pretty easy to be trapped in a little bubble and just think there are dining halls everywhere on campus and everyone has a meal plan,” Gross said. “I’m so glad I was awakened and made more aware of real issues.”

At the time, in the fall of 2017, Gross was the president of the local chapter of Challah for Hunger, a nonprofit that raises money through the sale of challah bread to support social justice causes. In recent years, the organization’s mission has shifted to focus on hunger generally and, in the past two years, on campus hunger specifically.

Last summer, Gross was one of 11 student Challah for Hunger leaders who met in Philadelphia as part of the organization’s second Campus Hunger Project Cohort. The students spent a day training in advocacy techniques, including social media campaigning, writing op-eds, leadership strategies and communications skills. They also spent time setting goals and intentions for hunger projects they sought to work on when they returned to campus.

“It’s a yearlong training process,” said Miriam Lipschutz, the Challah for Hunger project manager who oversees the organization’s Campus Hunger Project Cohort. “It’s really kind of diving deep. How do I effectively lead a campaign with a very specific goal? How do I build coalitions? After that year, they have a strong foundation they can use in the rest of their lives.”

When Gross returned to Vanderbilt in the fall, she set about learning what her university already offered by way of assistance to hungry students and compiled the results into a resource guide that she hopes university departments will feature on their websites. Her next project is to bring a program to Vanderbilt that allows students to donate unused meals from their food plan to hungry students. 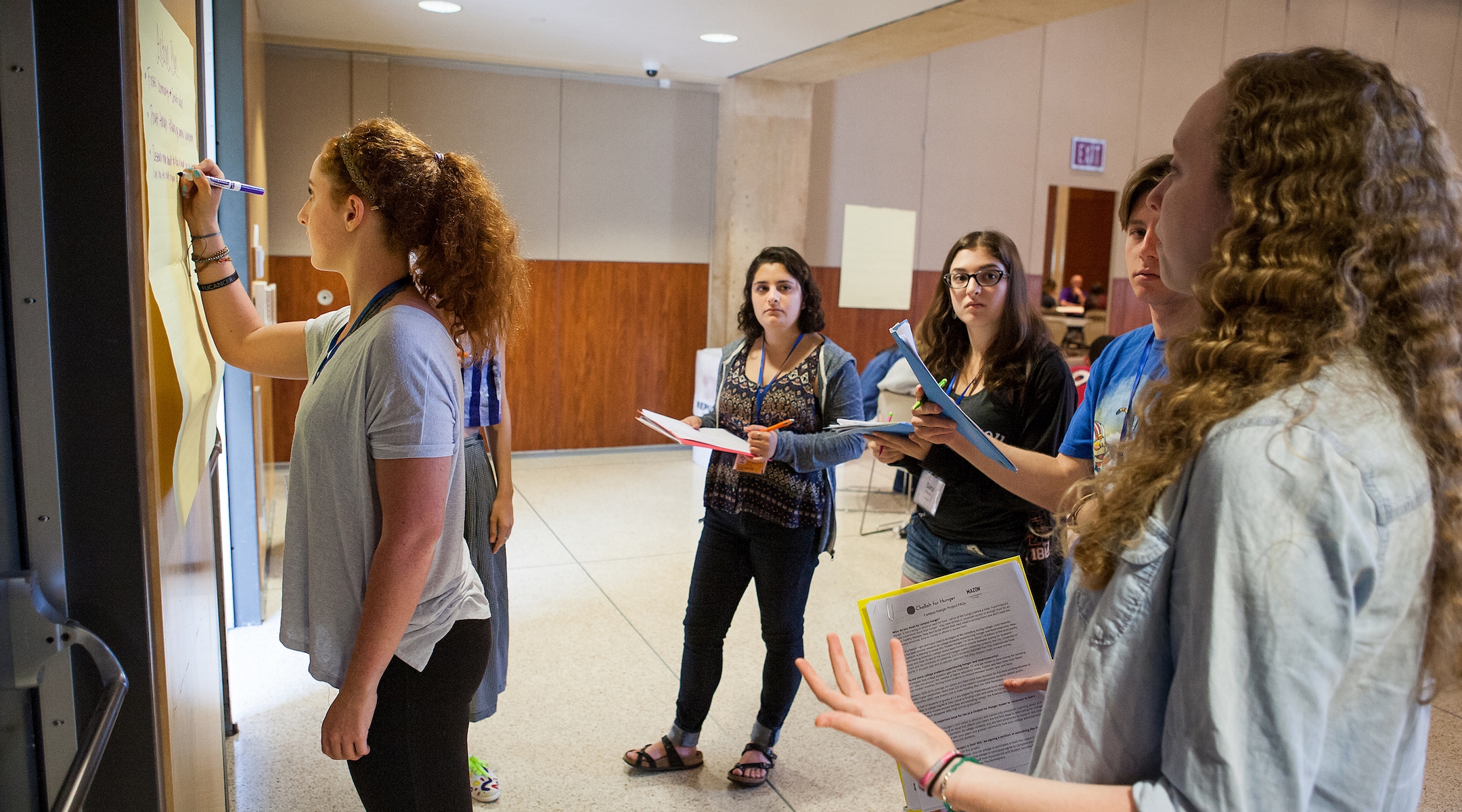 Student activists in the Campus Hunger Project Cohort get training in advocacy techniques to raise awareness and reach solutions to address the problem of hunger on campus. (Chris Kendig)

At Clark University, cohort member Monica Sager, a sophomore, is working to establish a student government-financed fund that would provide five meals per week to hungry students and do a survey to determine the extent of student food insecurity at the school in Worcester, Massachusetts.

University of Michigan sophomore Jordan Marcus has been advocating for a campus food pantry at the school’s Ann Arbor campus. Mindful that some students might be embarrassed to be seen using the pantry, Marcus is pushing for the facility to offer kitchen access, cooking classes and other resources that would attract a range of students — not merely those who are food insecure.

“We decided to offer all these different amenities so people would feel comfortable coming,” Marcus said. “They can also benefit from budgeting and cooking classes. It’s really just an all-encompassing approach to tackling this major issue.”

The focus on campus hunger represents an evolution for Challah for Hunger, which was founded in 2004 at Scripps College in Claremont, California, with a more general mission to support social justice causes. By 2014, the group had grown to include chapters at more than 50 campuses around the world and was beginning to focus its efforts more narrowly on addressing hunger in the United States. The following year, the group made addressing campus hunger its main objective.

“When we started talking about this issue back in 2016, we were sort of shocked to learn about campus food insecurity,” said Carly Zimmerman, Challah for Hunger’s CEO. “We had been working on campus for more than a decade at that point, and it wasn’t until we started actively looking that we realized this is a really prevalent issue.”

In January, the U.S. Government Accountability Office released a study showing that nearly 2 million at-risk students who were potentially eligible for government nutritional assistance did not report receiving benefits in 2016.

When Challah for Hunger conducted its own study at the 21 universities where it has an active presence, it found that 80 percent of university administrators acknowledged that food insecurity was a problem. Another 65 percent said there was no campus-wide policy to address it.

“That was really eye-opening to us,” Zimmerman said.

It was also eye-opening to Gross. One of the things she discovered in compiling her guide was that various campus initiatives were operating in isolation from one another. She also learned about all the ways that students can fall through the cracks of a system even when there are ample resources to assist them.

“I recently talked to a student who sends money home that would have been going toward her food budget, and instead they are supporting their parents,” Gross said. “This sort of thing is so often overlooked by offices of financial aid because looking at parents’ salaries is not the only indication of how much students have to spend on things like food.

“I was surprised, and I think a lot of other people were, too. It’s very clear this is a major pressing issue.”