In downtown Brussels, once vibrant synagogues are now dying or sold 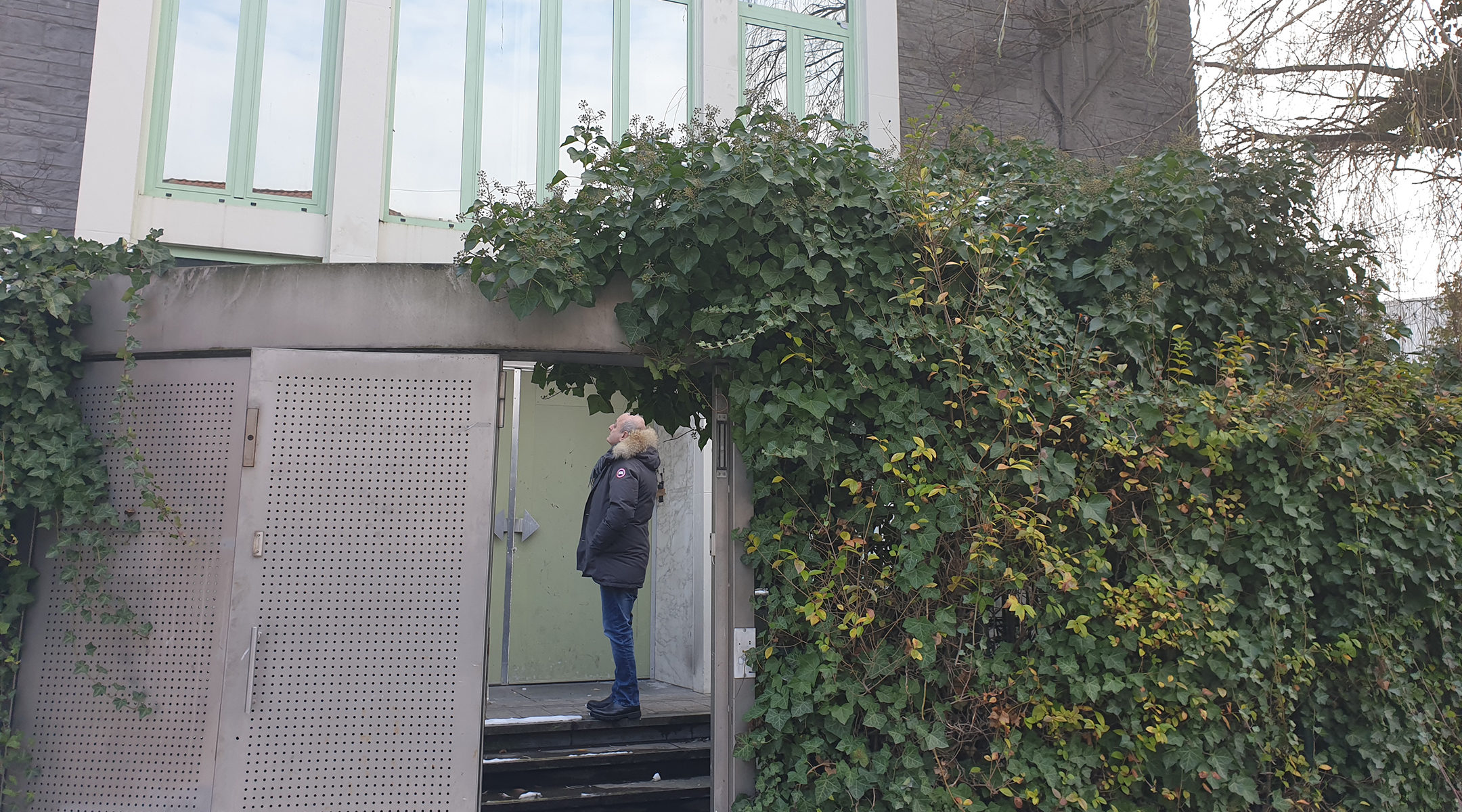 Joel Rubinfeld, a leader of Belgian Jewry, stands outside one of the synagogues that have closed down in recent years in Brussels, Belgium on Jan. 24, 2019. Cnaan Liphshiz
Advertisement

BRUSSELS (JTA) — Growing up, Joel Rubinfeld was always up for going with his parents to their downtown synagogue here.

The sermons were OK, he said, but the real clincher was the full-size ping-pong table at the Sephardic Synagogue on Pavillion Street.

“Placing that table was a stroke of genius by the rabbi,” Rubinfeld, 50, recalled with a smile. “Children and teenagers would play for hours as others scampered around the building’s spacious yard.”

Three decades on, however, the synagogue’s former building and yard stand deserted and overgrown with vegetation in what has become one of the Belgian capital’s seediest areas. It borders a red light street with display windows featuring skimpily dressed prostitutes trying to seduce passersby.

Once the beating heart of a Brussels Jewish community of about 20,000, this area since 2012 has seen the shuttering and sale of two of its four synagogues, as well as the closure of the Maimonides School that used to be Belgian Jewry’s flagship institution.

Coinciding with rising anti-Semitism, a government-led crackdown on religious freedoms and growing emigration by Belgian Jews, this decline can easily be seen as ominous for the future of Brussels Jews. Despite these issues, however, there is also evidence that the same community is reconsolidating in the city’s leafy and more affluent south, adapting successfully to urban demographic changes.

“Of course it saddens me when an institution that was one of our community’s most important assets closes down and dies out of security concern,” Yohan Benizri, the president of Belgium’s CCOJB federation of French-speaking Jewish communities, said about Maimonides’ closure.

The closure and sale of two downtown synagogues reflects “more than anything the fact that Jews in Belgium and throughout Western Europe are less interested in going to shul,” he said.

But at the same time, Brussels’ two Jewish remaining schools, which are located in the capital’s south, “have never had higher attendance,” Benizri said, adding that the same area has seen the opening of at least three synagogues over the past 30 years.

The change began in the 1970s with the arrival of Arab and African immigrants. Many settled in the affordable downtown neighborhoods where Jews of Eastern European descent had lived for about a century beforehand.

By the mid-1980s, many of the Jews who lived downtown, near the Nord and Midi train stations, had already left for more affluent neighborhoods. Their synagogues and major cultural institutions remained downtown well into the 1990s, but the area had become a hub for criminal and extremist activity.

This deterioration and the security challenges it brought to a Jewish school with hundreds of students were major reasons for the closure of Maimonides in 2015.

Many Jews who lived downtown left not to get away from their Muslim neighbors, but because they had accumulated enough wealth to afford living in a richer neighborhood, said Daniel Rozenberg, the president of the Stalingrad Synagogue, one of the two shuls that still exist in downtown Brussels.

But fundamental differences in the two populations’ attitudes to immigration complicate matters, he said.

“The Jewish community has made an effort to integrate into the Belgian society that had welcomed it,” Rozenberg said. “Today, where our parents’ generation used to live there are only Muslims, who do not display the same desire to integrate and they don’t employ the same level of energy to generate prosperity.”

Muslim leaders would no doubt disagree with Rozenberg’s analysis, but the shift he describes are accurate: Downtown Brussels has far fewer Jews than it had a few decades ago. The Stalingrad Synagogue — a cavernous space rich with wood furniture that was set up in what used to be a residential home – can barely rely on a minyan, a quorum of 10 Jewish men required for public prayers in Orthodox Judaism.

“In truth, it’s been dying since before I became its president in 2002,” he said, but adding, “so far, we are there, very much in existence.”

Not far from Stalingrad, the larger Clinique Synagogue, the other synagogue downtown, is facing similar challenges. An imposing corner building with a capacity of more than 500 worshippers, it stands mostly empty.

Rubinfeld’s father, a Holocaust survivor who opened a bag factory downtown, celebrated his bar mitzvah at Clinique many years ago.

“No, I can’t say I feel too safe here,” Rubinfeld said outside Clinique, which in 2014 survived an attempted arson attack. Standing near his black SUV and talking to a journalist, he drew curious looks from groups of youths on their way home from high school. “Two able-bodied men may not mind being eyeballed,” he said. “But consider the elderly Jew. Would you come to pray here if you were him?”

Against this background, both the Sephardic Synagogue, with its ping-ping table, and the nearby Rogier Street Synagogue were sold in 2016. Perhaps fearing vandalism, the new owners of the Sephardic promptly dismantled the Star of David from its facade, even though it was registered for preservation. 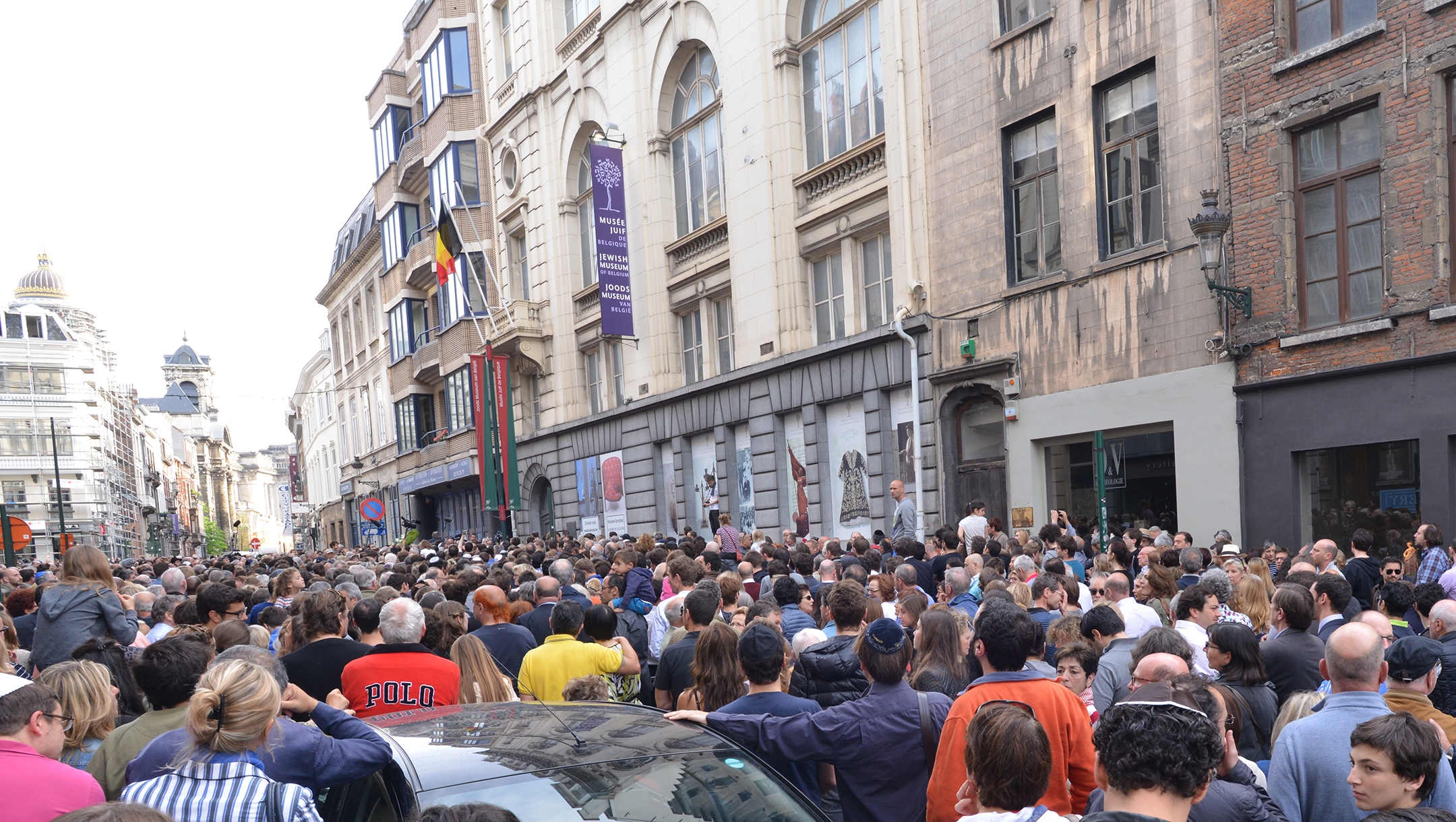 A commemoration for the four people killed in May 2014 at the Jewish Museum of Belgium in Brussels. The attack was a key factor in the immigration of Belgian Jews to Israel. (Cnaan Liphshiz)

Amid attacks like the attempted arson at Clinique and the slaying of four people at the Jewish Museum of Belgium that same year, immigration to Israel by Belgian Jews increased to what was termed “a silent exodus” by Rubinfeld, who heads the Belgian League Against Anti-Semitism.

From 2010 to 2018, an average of 205 Belgian Jews made aliyah annually — a 54 percent increase over the annual average of 133 immigrants to Israel from Belgium in 2005-09, according to Israeli government data. Generally wealthier and more polyglot than their French counterparts, many more Belgian Jews have left for English-speaking countries.

In 2015, the chief rabbi of Brussels, Avraham Guigui, grabbed headlines when he said following a wave of terrorist attacks in the city that “people understand there is no future for Jews in Europe.” In addition to immigration to Israel, “there is immigration by Jews to Canada and America. Recession is driving the young people to leave Belgium,” the rabbi said.

“You see the absence of people, former schoolmates who now live in Florida, Melbourne, London,” he said.

The passing last year of laws forbidding techniques used in the kosher slaughter of animals in two out Belgium’s three states – though not in Brussels – has dealt another blow to many members of the kingdom’s Jewish minority. Designed to limit the much larger industry of halal meat, the bans are also hurting the production of kosher meat.

Even in the relatively secular community of Brussels, the bans are “worrying because once one religious freedom is targeted, then there is the possibility of others following suit, like brit milah,” or circumcision, Benizri said. On a personal level, he said, he would feel “less comfortable living in Belgium” unless his community succeeds in its legal efforts to reverse the bans.

Still, Benizri does not feel that his community is in decline — Brussels has about a dozen synagogues, two schools and a radio station.

“The focus of Jewish life has shifted from the synagogue to cultural activities. We still have a strong sense of Jewish identity,” he said. “Declining communities tend to be graying, with few young members. And I don’t think this our situation.”

Asked about the viability of his community’s future, he said “No one has a crystal ball.”

“There will always be a Jewish presence in Brussels,” he said. “Instead of making predictions about the future, I just try to serve them as best I can.”