As Jews flee Belgium, a seder marks a family exodus 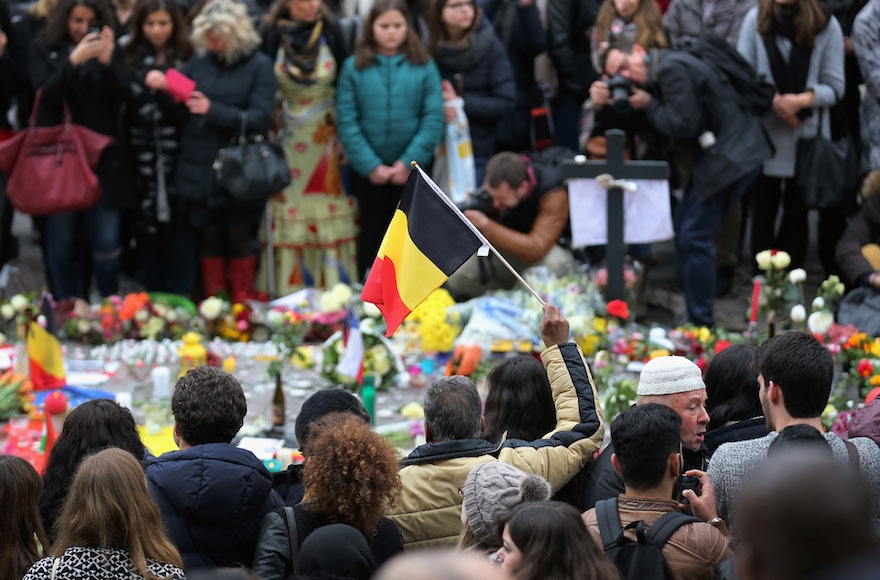 BRUSSELS (JTA) — I was feeling nervous about coming to Brussels for seder with my family.

Making the 130-mile trip there from my home in Amsterdam meant taking my 5-month-old son on a train that last year saw an attempted jihadist attack, and into a city that is still reeling and on alert from the March 22 Islamist bombings that killed 32 people.

I wasn’t worried about terrorism, though. Having experienced, by the time I turned 19, two intifadas and the Gulf War missile attacks in my native Israel, I was pretty much immune to terrorism’s psychological effects.

No, I fretted over my family’s violent and scary rendition of “Echad Mi Yodea” — the cumulative-verse Passover song that they enjoy hollering, building up to an ecstatic crescendo. By the 13th and final verse, about 35 of them are shrieking, red-faced and hoarse, while pounding fists and cutlery on the table like some prison riot scene.

I have grown immune to this tradition’s psychological effects, too, and on occasion had even used it to test the mental composure of unsuspecting dates. But I feared it would all be too much for little baby Ilai.

Yet as I waited for all hell to break loose last week, I saw my worries were unfounded. My family’s “Echad Mi Yodea” this year was a shadow of its former self in what I suddenly realized was a vivid illustration of the absence of relatives from my age group who, like many Belgian Jews, have left their native country because of its anti-Semitism problem. With each passing year, there were fewer of us around the seder table.

My Belgian relatives have said goodbye to nine young seder rioters over the past 15 years. Six enlisted in the Israel Defense Forces and made aliyah. Two immigrated to the United States and one moved to London.

I came to Brussels this year because this seder was the sendoff for a second cousin and his wife, a physician and an architect, who are moving to Florida. His sister and her Belgian Jewish husband already live there.

“This is my last seder as a European,” cousin Mark (not his real name) told me over the phone. We spoke in Hebrew, a language learned by all my Belgian relatives my age at the insistence of aunts and uncles who were born to Holocaust survivors and who always regarded aliyah as a contingency plan in case things went south in Belgium.

“I want you to be there to send me off from slavery to freedom,” Mark said.

He feared for the future of his own two children in a country where Jewish schools are under heavy military guard and where Jewish students are being forced out of public schools because of anti-Semitic bullying.

“Things are bad here and I want a better future for my children,” he told me.

I asked Joel Rubinfeld, the founder of the Belgian League Against Anti-Semitism and a former president of the CCOJB umbrella of group of French-speaking Belgian Jewish communities, whether my family was unusual when it came to its emigration agenda.

“I’m afraid not,” he said. “There is the beginning of an expedited emigration process. Our only statistical view on it is through aliyah, which tells a very partial story in a community with highly educated members who can settle anywhere in Europe and have little trouble getting visas to the U.S., Canada and Australia.”

In 2014, Rubinfeld warned Belgian Jewry was seeing an “exodus” because of anti-Semitism.

Last year, 287 Jews immigrated to Israel from Belgium, which has a Jewish population of about 40,000. It was the highest figure recorded in a decade. From 2010 to 2015, an average of 234 Belgian Jews made aliyah annually — a 56 percent increase over the annual average of 133 new arrivals from Belgium in 2005-2009, according to Israeli government data.

READ: Who are the Jews of Belgium? A primer

Unlike French Jews, who tend to speak only one native language, Belgian Jews speak two and often three languages fluently. This could mean Belgian Jews have an easier time than their French counterparts immigrating to destinations that are not Israel.

Linda, Mark’s sister, moved to London and had two kids there with an Israel-born husband. She wants to leave Britain for Florida because she doesn’t feel safe in the United Kingdom either.

“Europe is doomed. The bad guys won,” she said. “I’m not going to raise my children in fear just to make a point.”

Her father is a French-born lawyer who was raised Catholic by his mother, a Holocaust survivor, before reconnecting to his Jewish roots. He told me his feeling of personal safety in Brussels was irreversibly shattered when robbers invaded his home a few years ago, tied up him and his wife, and beat him before robbing the couple.

“We may have been singled out by the robbers because we’re Jewish, but at this point, does it matter? It completely changes how you feel just walking down the street,” he said. He and his wife are preparing to join their two children in Florida.

READ: Can Belgium protect its Jews? A community has its doubts

Catching up with other relatives between seder songs, I found myself chatting in Hebrew to Sylvia, an aunt whose three children are living in Israel with their spouses. It took a while before I realized that the last time we spoke Hebrew, she was limited to basic sentences like “I have a yellow pencil.”

Unbeknownst to me, she and her husband have been attending ulpan, Hebrew-language school, preparing to join their children in Israel. They bought a penthouse apartment in Tel Aviv years ago.

Even before the eruption 15 years ago of anti-Semitic Islamism in Europe, Sylvia and her husband said they would leave Belgium if ever the National Front, the far-right party in neighboring France, would come to power.

Another uncle, I learned during the seder, had taken up Israeli citizenship last year like two of his four children, who are currently serving in the Israeli army, but is still living in Belgium.

“It hardly matters if I do it now or in a few years when we actually move to Israel, so I figured, why not?” he explained.

But I recalled the very different attitude of his late mother, my great-aunt and matriarch of my family’s Belgian branch. A Polish-born, steel-willed woman who survived the Holocaust in hiding in Belgium, she was always proud of her adopted country, where she and her husband survived and later prospered.

Though she raised her three children to be very pro-Israel, she enrolled the first two in a public school and strongly encouraged all of them to stay in Belgium, where she mastered impeccable French and integrated seamlessly.

I asked her daughter, the one preparing to follow her two children to Florida, why she doesn’t share her late mother’s attachment to Belgium.

“My mother and her generation felt gratitude to Belgium after coming from Poland, where even before the Holocaust there were limits to a Jew’s social advancement,” said my aunt, a physician. “Belgium was her America. It welcomed her with open arms. We have had a different experience here.”