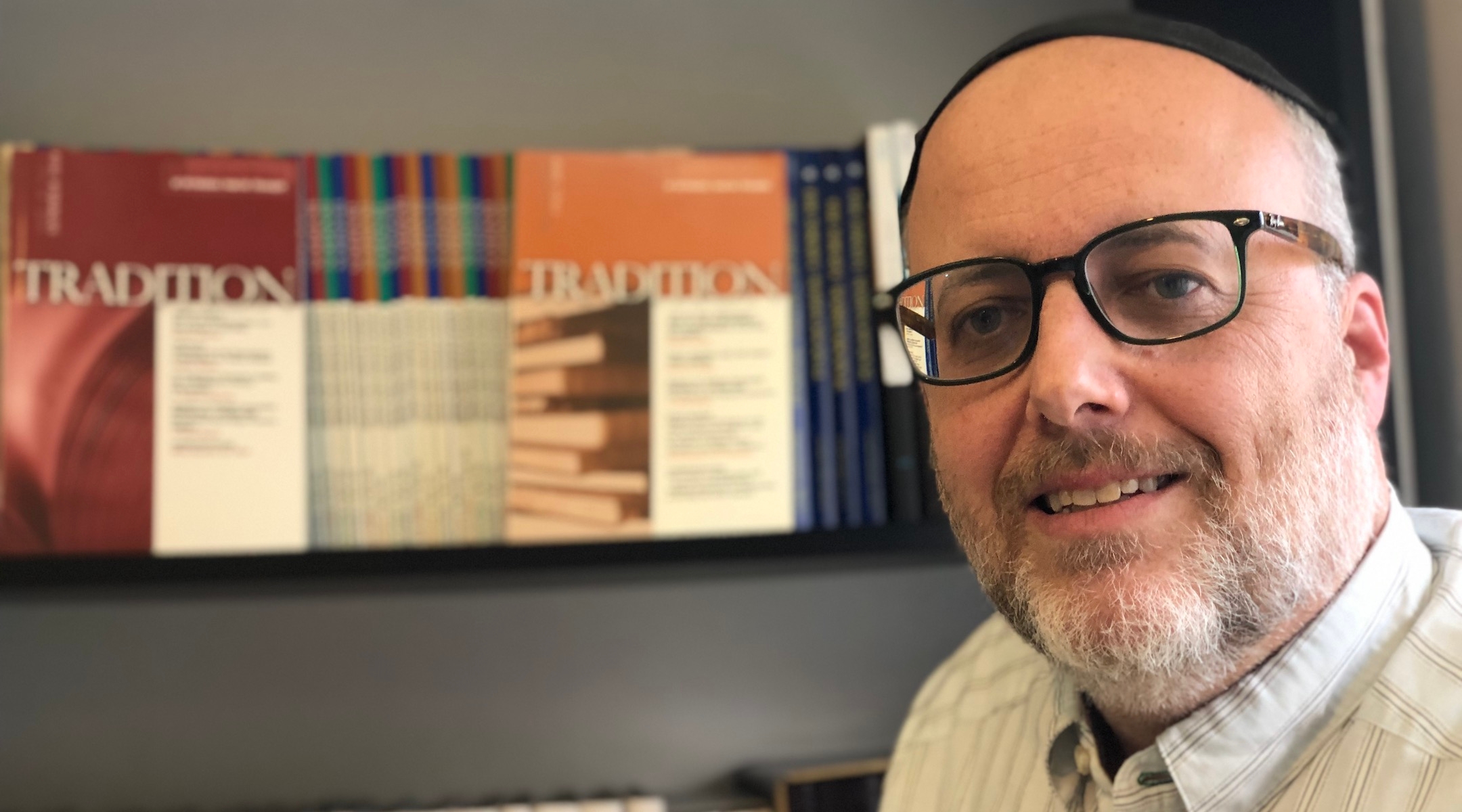 JERUSALEM (JTA) — American Modern Orthodoxy is in many ways an ongoing argument between Jewish tradition and modernity. Leaders and followers prefer to call it a balancing act, involving everything from how to read the Bible to agreeing on the borders of a Jewish state to whether to ordain female clergy.

That argument, or balancing act, has taken place for six decades in the quarterly journal of the Rabbinical Council of America, aptly named Tradition. Founded in 1958 by Rabbi Dr. Norman Lamm (who would later go on to head Yeshiva University, the movement’s flagship educational institution), it has featured groundbreaking philosophical and theological essays — including Rabbi Joseph B. Soloveitchik’s seminal 1965 essay “The Lonely Man of Faith” — whose influence has reverberated far outside the narrow confines of the Jewish community.

Although scholarly in tone, the journal has been a platform for heated debates over how halacha, or rabbinic law, treats the political and social challenges of the day. Its authors, navigating between the liberal Jewish movements to their left and the more rigid Orthodox movements to their right, have tackled subjects like campus unrest, gun control, immunization, the role of Israel in Orthodoxy and, especially in recent years, the status of women in religious life.

Customarily, given Tradition’s affiliation with the RCA, its editor has been an active pulpit rabbi located in the United States. In a departure, however, the journal recently announced the appointment of Rabbi Jeffrey Saks as its new editor, choosing an American-born educator who has lived in Israel for the past quarter century.

A native of Roselle, New Jersey, Saks heads ATID, the Academy for Torah Initiatives and Directions, a nonprofit focused on “foster[ing] new and significant thought on the crucial issues facing Jewish education.” He also is the co-founder, with Rabbi Chaim Brovender, of WebYeshiva.org, an online yeshiva connecting thousands of students worldwide.

Saks is an expert, too, on the literature of S.Y. Agnon, the Nobel Prize-winning Hebrew novelist who dealt with the tensions between traditional Jewish values and the new Zionist culture emerging in the land of Israel in the early 20th century. Saks recently completed work on a 15-volume collection of Agnon’s work that the Bible scholar Robert Alter called “a heroic task.”

JTA met with Saks in ATID’s offices on the ground floor of a white stone building in this city’s upscale Talbiyeh neighborhood. Surrounded by trees and located down the street from the Israeli president’s official residence, the quiet and contemplative property is suited to the kind of intellectual work taking place within its walls.

Sitting at his desk in a buttoned-down white shirt and large, black-knitted kippah, his white and brown beard close cropped, Saks discussed his vision for the future of the publication.

“Well, the name of the journal is Tradition, after all, which telegraphs the idea that there is a certain value to tradition, to continuity,” he said, “and I think that the core vision of the journal which was founded over 60 years ago by Rabbi Norman Lamm is still as relevant to us today even as, over the generations, the community has changed.”

Saks said that one of his first moves will be to begin the transition to producing digital content even as he preserves the publication’s print format. A current online archive does not include the last three years of Tradition.

“Some might say we don’t need a quarterly print journal anymore, let’s just have a blog. Let’s just turn it all over to Twitter,” he said sardonically, pointing out the value of such journals in promoting reasoned and thoughtful discourse. But even so, he continued, the slow pace of essay and response inherent in Tradition’s format sometimes can be stifling as well.

“So if we can have an issue that is thought-provoking or raises questions or people respond to, that can and should be going on online instantaneously between print issues. Tradition, with a lowercase ‘T,’ changes slowly as does the journal Tradition, with a capital ‘T.’ We are bringing it in to the late 20th century and then we will go on from there,” he said, smiling.

Saks envisions a revamped website, “where we will be conducting conversation about the things that appear in the print journal, either an exchange of writing or other types of media, podcasting, video conferencing [and even] symposia.”

And while not wading into the debate over female ordination — in 2017, the Orthodox Union banned its affiliated Modern Orthodox synagogues from hiring women clergy — Saks said that he foresees more contributions from female scholars.

“Tradition is a platform where the best writing and scholarship in our community will be featured and that will obviously include women and, hopefully, in greater numbers than we’ve featured in the past, and that’s just a sign of larger corrective waves that have taken place in our community and the roles that women and playing in teaching and writing and leadership and scholarship,” he said.

His wife, Ilana Goldstein Saks, is herself a Bible teacher. The couple live in Efrat, where they have raised four children.

Saks said that he is interested in addressing issues of relevance to contemporary society through a Jewish lens, citing a recent submission by a young author dealing with the moral questions raised by self-driving cars. The article cites the “trolley problem,” a famous hypothetical in moral philosophy about the choice of sacrificing a single life for the potential benefit of the many. An onboard computer, for example, may have to decide between sacrificing its own passenger or steering into a crowd.

“What does it mean to examine that question through the perspective of halacha?” he said. “You have this intersection of a classic problem of moral philosophy [and] a world of relevant halachic material which goes back to the Talmud.

“It’s not just some kind of abstract thought experiment. We should have something to say on this topic, and because we are Jews we are not all likely to agree. And that’s going to be something that’s going to be very rich and engaging and practical, but also philosophical. It rests on the intersection of all of these things.”

Saks himself came to tradition, with a lowercase “T,” after growing up in what he describes as “suburban Jersey in a home that had Jewish identity and pride but was not specifically connected to Jewish tradition and observance.”

In high school, however, he became active in the Modern Orthodox youth group NCSY and met Rabbi Steven Dworken of  Congregation Anshe Chesed in nearby Linden. (Dworken, who died in 2003, would later become executive vice president of the RCA.)

“I began a process of coming closer to observance, and even though I remained in public high school throughout my schooling, I then went off to Yeshiva University, which was an incredibly transformative experience,” said Saks, who has a bachelor’s and master’s degree from Y.U. and was ordained there. “The people and ideas that I was exposed to very much helped mold me. I got there right after Rabbi Soloveitchik stepped down from public life.”

Saks immigrated to Israel in 1994, took part in a two-year educational program called the Jerusalem  Fellows and founded ATID, which does research in education and works with young educators and educational institutions.

He has spoken about how his grandmother gave him a copy of Agnon’s “Twenty-One Stories” when Saks was still in his teens, sparking a lifelong interest in the Israeli author that led him to produce, with various colleagues, The Toby Press S.Y. Agnon Library.

Saks describes Agnon as a writer who “was so very much occupied in his long writing career with questions of the transition between tradition and modernity, something that is very much central to our own religious identity as a community.”

While Tradition is no longer the exclusive publication for Modern Orthodox thought, it is still important, Saks insisted, because its mission is to navigate the “delicate relationship between thought and practice, between philosophy and lived life.”

“Ideas and action are essential to the life of a thoughtful, engaged religious and spiritual community,” he said, “and there are many ways into that conversation. Tradition has been for 60 years a very significant platform for that kind of interaction. And we hope to raise that and we hope to expand it through the benefits of new media, but to continue to do that. In that regard, we are still quite as relevant as ever.”