CORAL SPRINGS, Fla. (JTA) — Five weeks after she hid on the floor of the auditorium at Marjory Stoneman Douglas High School as a mass shooter terrorized the campus, Casey Sherman was helping organize a 30,000-person march against gun violence in Parkland.

When the buzz of that activism wore off, the then-17-year-old moved on to her next project: co-founding a nonprofit with another student to help people engage in civic activism. That organization, called Empower the People, partnered in October with “Insatiable,” a Netflix show, to get out the vote ahead of the midterm elections.

But while she was trying to create change on a national stage, Sherman also was dealing with personal trauma. She began to startle at loud noises. Last week, while passing a building where the fire alarm was blaring, she froze. Why weren’t people streaming out the doors?

“I spent five minutes staring incredulously at this building where nobody was moving and nobody had any sense of urgency,” she said. “If it was me in that building, I’d be moving the second the alarm goes off.”

Sherman, along with other Parkland students, teachers and parents, has spent the past year combining relentless activism with recovering from the shooting and mourning the 17 people killed on Feb. 14, 2018. Sometimes, she says, the two work hand in hand: Her grief propels her to keep fighting for a safer world. But she knows that other times, organizing marches and registering voters allows her to avoid dealing with the aftermath of the tragedy.

“During those five weeks, I got very caught up in the planning process,” Sherman said of the time between the shooting and the demonstration on March 24, called March for Our Lives. “I avoided addressing the emotions I didn’t really know how to deal with.”

When the march was over, she said, those emotions flooded in.

“Everything came washing over me and it was like, why did this have to happen?” she said. “Nobody should have to deal with this. It sucks. It really does. That’s one of the things that pushed me forward. There’s nothing I can do to change the past, but I can change the future.”

The shooting in Parkland led to a burst of student-led activism from this quiet, sunny suburban community near the beach. High school juniors and seniors confronted national politicians on CNN. The March for Our Lives in Washington, D.C., brought as many as 800,000 people to the capital to protest gun violence, perhaps the biggest march in the city’s history. In the time since, parents of slain students have started organizations to address the issue and honor their children’s memory.

Noah Fineberg, who was close family friends with Jaime Guttenberg, one of the murdered students, attended his first political protest at the March for Our Lives and hasn’t looked back. He interned last summer and fall for Andrew Gillum, Florida’s Democratic gubernatorial nominee, working seven days a week. Still a student at the nearby Deerfield Beach High School, he is now the campaign manager for a local mayoral candidate. He, like Sherman, is also active in NFTY, the Reform Jewish youth group, and participated in its Shabbat services on the day of the march.

“We realized, we were having lunch in the Capitol, and we were saying, like, oh my God, we just walked into members of Congress’ office and we basically demanded a meeting, and we got one in five minutes,” he said, describing an impromptu lobbying trip he took the day before the march. “That is our power right now.” 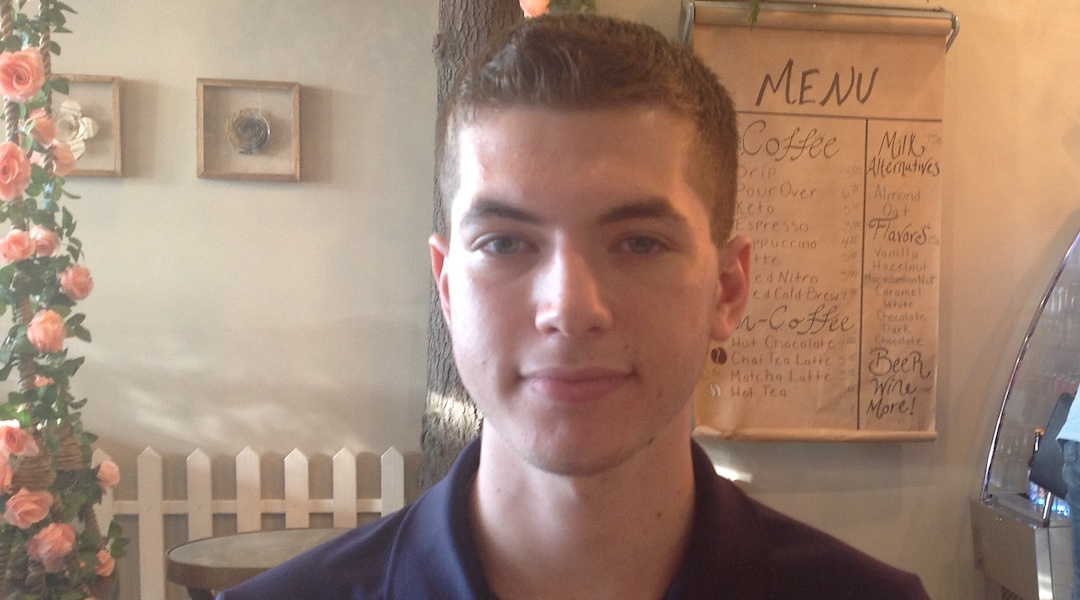 Noah Fineberg, a student at a neighboring school who lost a close friend in the Parkland shooting, has delved into political activism in its wake. (Ben Sales)

Not everyone is focused on boosting gun control legislation. One of the parents, Lori Alhadeff, focuses instead on measures to make schools safer, given the frequency of mass shootings in the U.S. She says the national debate on gun safety gets too polarized, leaving practical safety measures lost in the shuffle.

She just helped pass legislation in New Jersey to require silent, location-based alarms in schools to alert law enforcement in the event of an emergency like a shooting. The policy is called Alyssa’s Law, in memory of Alhadeff’s daughter, who was 14 when she was killed.

Make Our Schools Safe, the organization founded by Alhadeff and her husband, Ilan, also has helped provide schools with Stop the Bleed kits, which contain medical supplies to stem traumatic hemorrhaging. It is mobilizing students at Stoneman Douglas and elsewhere to encourage their schools to implement safety measures. And the Alhadeffs met in December with President Donald Trump about his School Safety Commission, which released its final report that month.

“Everybody lives in a bubble, like, ‘You know what, this could never happen to me,’” said Alhadeff, who is Jewish. “And I’m trying to bring the awareness [that] this could happen anywhere at any time, and our schools are soft targets, so we need to take a holistic approach.”

Advocating for school safety has helped Alhadeff process the grief over her daughter, a smart, vivacious soccer player who loved her friends and hanging out on the beach. Last year Alhadeff won a seat on the Broward County school board, where she has pushed for greater transparency when discussing safety procedures at local schools. She made waves locally this week when she clashed over the issue with Superintendent Robert Runcie — a fight that led the local NPR station’s afternoon news on Tuesday.

“It’s empowered me to want to make change in the sense of using my grief as activism, using this as my power,” she said. “On 2-14, I had no power. It was taken away from me. I couldn’t do anything, but now I can. I’m living for Alyssa, I’m honoring her.”

Alongside the advocacy efforts, a local Jewish organization, JAFCO (Jewish Adoption and Family Care Options), has received a federal grant to open a wellness center for the Stoneman Douglas community. The center will offer a variety of wellness activities for teachers, students and families of the high school such as yoga, meditation, nutrition or aromatherapy. It also will  employ social workers who can visit with families and help them access needed social services.

Sarah Franco, JAFCO’s executive director, said those impacted by the tragedy need more than activism to heal. In general, the organization works on behalf of abused and neglected children, facilitates adoption and foster care, and provides counseling and support to struggling families — that gives it expertise in how to cope with trauma.

Healing in the midst of chaos is what Casey Sherman has tried to do in the year since the shooting. During the past 12 months, she has managed to balance completing her school work, running a nonprofit and finding a few minutes to relax, watching reruns of “The Office” on Netflix.

And she’s still processing the tragedy. After months of activism for gun safety, she felt frustrated and upset when the Pittsburgh synagogue shooting happened in October near where some of her camp friends lived. Now they were dealing with some of the issues she had been confronting since February.

Next year, Sherman will be off to college, in a place that isn’t embedded with the same harrowing memories as Stoneman Douglas. She hopes to continue her activism and, like many graduating seniors, she is nervous about keeping in touch with her friends.

But Sherman is ready to move forward with her life, too.

“This is the only place where everyone went through the exact same thing,” she said. “It’s definitely a huge source of support. It will be hard to leave, but I’m definitely ready for the next chapter of my life.”

‘We stand in solidarity’: What Jewish organizations are saying about the protests over George Floyd’s death