Spike Lee: The Jewish character in ‘BlacKkKlansman’ added a lot of ‘complexity’ to the film 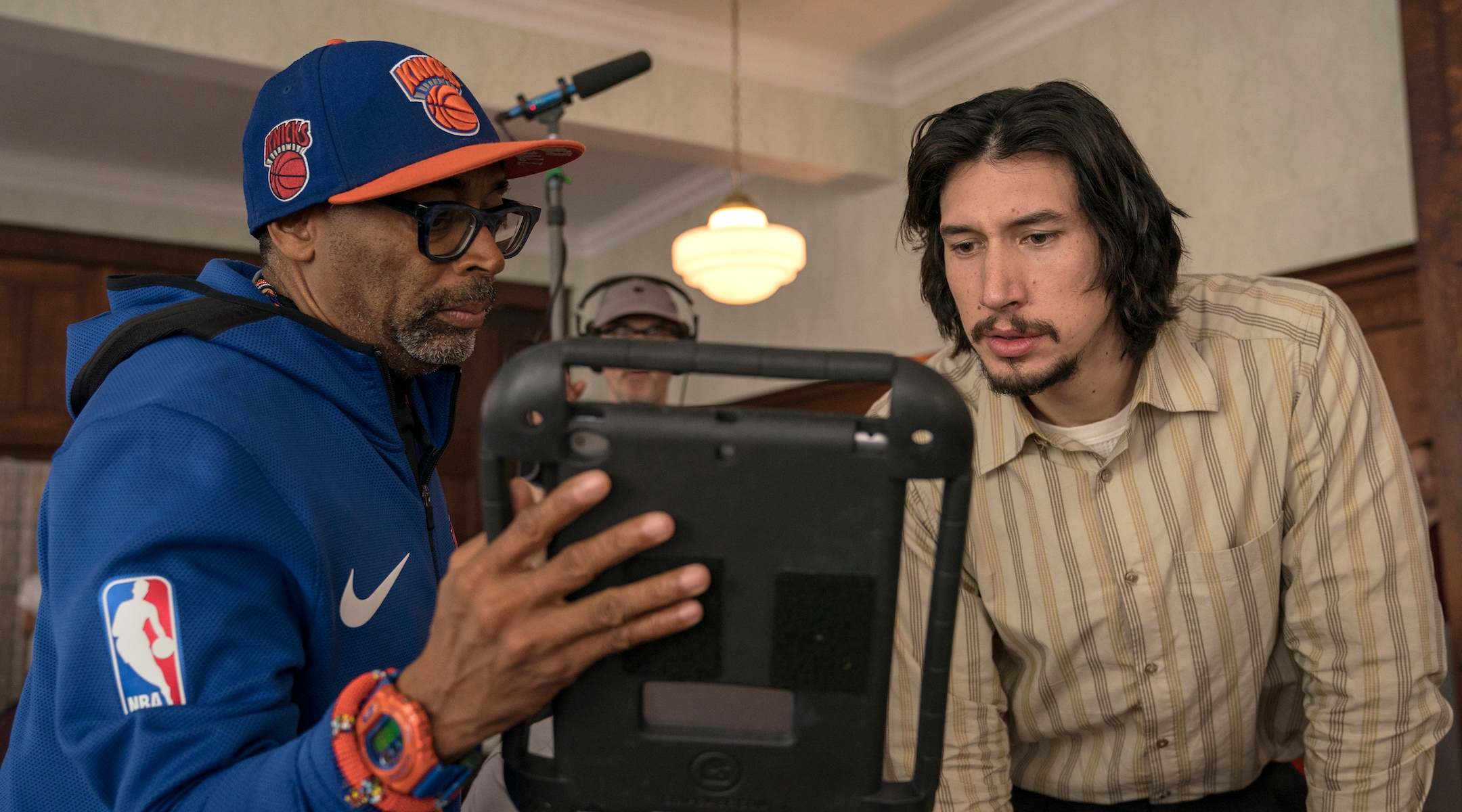 (JTA) — In one of the pivotal scenes of Spike Lee’s Oscar-nominated film “BlacKkKlansman,” Ron Stallworth, the first black cop on the Colorado Springs police force, tries to motivate his Jewish detective partner Flip Zimmerman to finish their task at hand: infiltrating a local Ku Klux Klan chapter to thwart some dangerous schemes.

“You’re Jewish,” Stallworth says. “Why you acting like you ain’t got skin in the game?”

“I was always just another white kid,” he tells Stallworth.

But after seeing and experiencing the KKK’s virulent anti-Semitism firsthand as an undercover agent, he had begun to think about his Jewish background “all the time.”

“BlacKkKlansman” was based on a true story and loosely adapted from the real-life Stallworth’s 2014 memoir, “Black Klansman: Race, Hate and the Undercover Investigation of a Lifetime.” In the real story, however, Stallworth’s partner wasn’t Jewish — the screenwriters who wrote the first draft of the script, Charlie Wachtel and David Rabinowitz, decided to invent the Jewish character of Zimmerman to raise the stakes of the story.

When Lee and his own screenwriting partner, Kevin Willmott, revised the draft, they purposely kept the character Jewish, realizing that it would “bring much more complexity to the role and to this black-white detective relationship.”

“We did not want [it] to become another black-white kind of buddy film, which has been done a million times,” Lee told the Jewish Telegraphic Agency. “Jewish people are No. 2 on the list as far as the Klan goes. So … when he goes undercover, when he’s face to face with these anti-Semitic racists, it’s just a lot more dramatic. You have two people who were both hated by the Ku Klux Klan.”

“BlacKkKlansman” has earned six Oscar nominations, including for best picture, director and supporting actor for Adam Driver, the non-Jewish star who plays Zimmerman. It’s the first nomination for best picture and best director for the outspoken Lee, 61, whose other films include “Do The Right Thing,” “She’s Gotta Have It” and “Malcolm X.”

When one of the film’s producers, Jordan Peele (known for his own film about race, “Get Out”) first sent Lee a draft of the screenplay, he was drawn by “the infamous six-word pitch: black man infiltrates the Ku Klux Klan.”

“How did that happen unless the guy was albino or passing for white?” he wondered at the time.

Lee has had a complicated history with the Jewish community dating back to his early years as a director in the 1980s. His third film, “Mo’ Better Blues,” sparked critiques for its portrayal of Jewish businessmen exploiting African-American musicians. The response was so heated that Lee wrote an op-ed piece in The New York Times titled “I Am Not an Anti-Semite.”

“I’m not a racist; I’m not a bigot; I am not an anti-Semite. What I try to do with all my characters is offer what I feel are honest portraits of individuals with both faults and endearing characteristics. I have criticized stereotypical images in other films, and I don’t deny others the right to voice such concerns about my work.”

Lee doesn’t regret writing the piece, even though he said it was the idea of his attorney at the time, who warned him that he might “never work in this industry again” if he didn’t.

“I understood why I had to,” the filmmaker said. “I wrote that piece because I wanted to continue to make movies. I didn’t want to take [any] chances.”

But as he said earlier in the interview, “I want you to tell me, in the history of the music industry, there’s never been any Jewish people who exploited black musicians? Ever?”

Is the Zimmerman character possibly another belated peace offering to Jews?

“Anyone who says that Spike is trying to get back in the good graces [of the Jewish community] by making Flip Jewish – that’s a totally false narrative,” Lee said. “It was done for no other reason than to make this a better story to tell.”

Nevertheless, the Zimmerman character prompted some commentators to see the film as a possible starting point for a new dialogue involving the black and Jewish communities, especially after the scandal surrounding Women’s March co-founder Tamika Mallory further frayed ties between them.

Lee, however, chose not to wade into that issue.

“[The film] might start some discussions, but ask me how I can mend black-Jewish relations – I can’t speak to that,” he said. 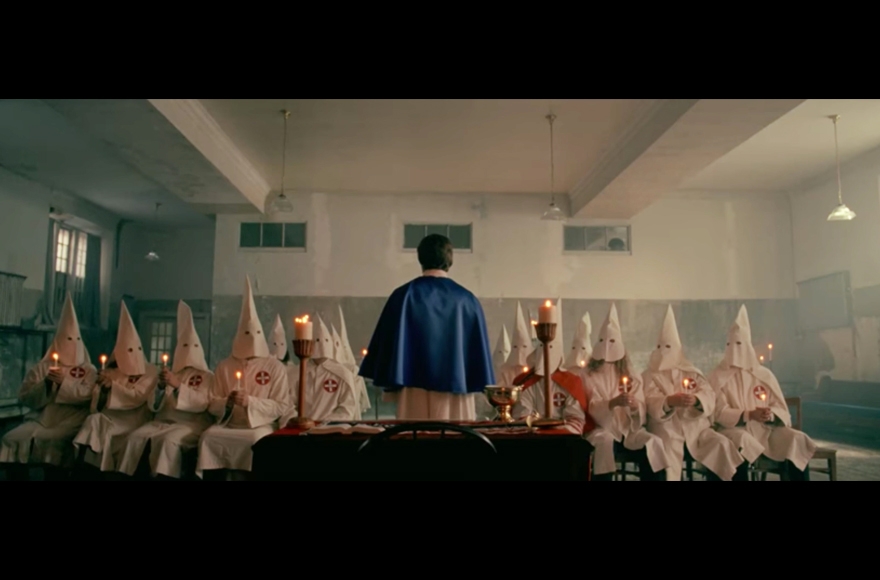 “BlacKkKlansman,” set in 1972, is a story of two cops, one black and one white, who infiltrate the Ku Klux Klan in Colorado Springs. (Screenshot from Youtube)

That doesn’t mean he’s not conscious of contemporary anti-Semitism, evident in incidents such as the Pittsburgh synagogue shooting last October. “BlacKkKlansman” contains footage from the 2017 white supremacist rally in Charlottesville, Virginia, and footage of President Donald Trump saying there are “some very fine people” on both sides of a demonstration in which neo-Nazi marchers chanted anti-Semitic slogans.

Trump, Lee suggested, gave his film a coda that wrote itself.

“I did not tell those people in Charlottesville who yelled and screamed that ‘The Jews will not replace us’ … to do that,” Lee said. “I didn’t tell those motherf****** to scream ‘blood and soil’ [and] to march with their motherf****** swastikas, and do their mother****** Adolf Hitler ‘Sieg Heil’ salute.”