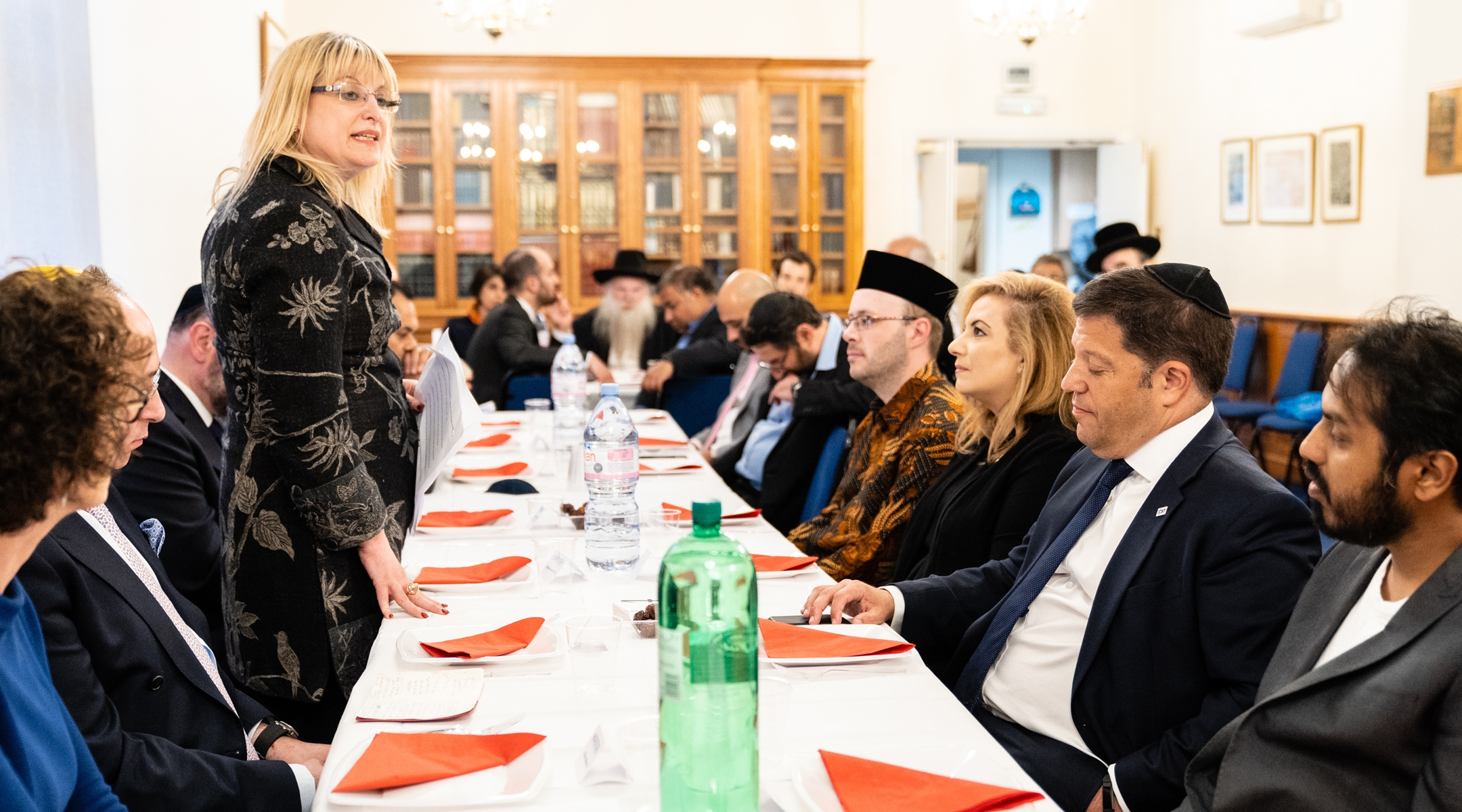 (JTA) — The top political representative of British Jewry, Marie van der Zyl, had a tough talk last week with a senior Hungarian official about anti-Semitism in his country.

It’s been a recurring theme in recent years: Many see anti-Semitic tropes in Hungarian Prime Minister Viktor Orban’s public vilification of the left-leaning billionaire George Soros, and some claim that his government is encouraging Holocaust revisionism. That’s all in addition to the broadly troubling harassment of anti-Orban dissidents in Budapest and the government’s efforts to curb independent discourse throughout the country.

“We were clear that while it might be legitimate to have a range of opinions about the causes supported by George Soros, some of the language used against Mr. Soros by Prime Minister Orban and others, whether intentionally or not, represent the oldest antisemitic tropes and this has to stop,” van der Zyl’s group, the British Board of Deputies — by far the most internationally engaged national Jewish group in Europe — posted in the statement. “We said that a clear test on the Hungarian Government’s good-will on the subject of the history of the Holocaust will be whether the new museum, the House of Fates, can command the support of the mainstream Hungarian Jewish community.”

(The development and rollout of the museum has been hampered by infighting between Hungary’s two main Jewish federations — one that has the blessing of Orban’s government and one that has criticized the involvement of right-wing historian Maria Schmidt, who has been accused of distorting Holocaust history. The museum was planned to cover the period of 1938 to 1948, but anti-Jewish laws were passed as early as 1920 in Hungary.)

But within days of publishing the release, the dialogue between van der Zyl and Szalay-Bobrovniczky deteriorated over email. Van der Zyl then took an unprecedented step for the Board of Deputies and publicly published an exchange of emails without the Hungarian official’s permission.

In one letter to van der Zyl, Szalay-Bobrovniczky said “it is misleading from you to say that we had a respectful and honest conversation. You were everything but respectful and honest.” In response to talks about the threatened demise of the Aurora alternative Jewish community center, he said that the building was not actually a Jewish community center and “has not been closed.” He also accused van der Zyl, an outspoken critic of the U.K. Labour Party over its own anti-Semitism problem, of “whitewashing” the party’s issues.

“With due respect, please mind your own business and we will equally not interfere with yours,” Szalay-Bobrovniczky wrote. “You do not have the slightest respect for Hungary.”

In a reply, van der Zyl called the Labour assertion “bizarre” and encouraged Szalay-Bobrovniczky to have his team fact-check the issue.

Van der Zyl’s original statement about the meeting with Szalay-Bobrovniczky did reference some of the positive steps that Hungary has taken in regard to the fight against anti-Semitism, such as advancing the adoption of the International Holocaust Remembrance Alliance’s definition of that form of racism.

But the statement did not note recent changes in the Hungarian penal code that introduced new tools to punish anti-Semites, or the fact that violent attacks on Jews are much rarer in Hungary than they are in Britain. Hungary’s Jewish community of 100,000, relatively large for Europe, is one of the continent’s safest thanks in part to the government’s efforts to keep it that way.

Israeli Prime Minister Benjamin Netanyahu also has cultivated close ties with Orban in recent years, and taken some hits for it.

In her closing statement, van der Zyl tried to patch things up.

“Again, I urge the Hungarian Government to take heed of our clear but constructive comments,” she wrote, “to ensure that the international reputation of Hungary can once again be of a country that treats Hungarian Jews and other minorities with the equal dignity and respect that we must all want for everyone.”