Researchers unlock the mystery of Polish diplomats who rescued Jews 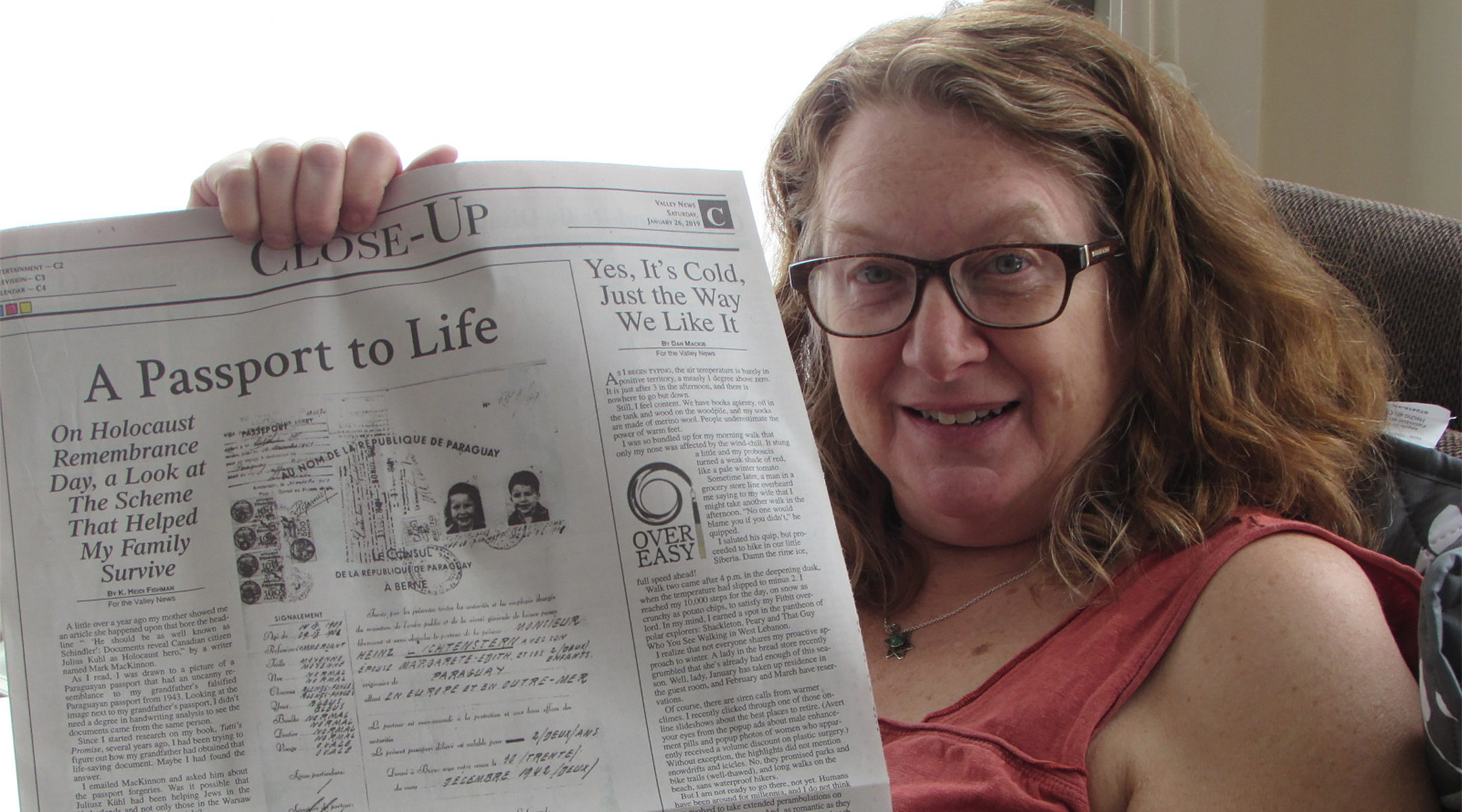 Heidi Fishman holding up an op-ed she wrote about her family's rescue from the Holocaust using a Paraguayan passport. (Courtesy of Fishman)
Advertisement

AMSTERDAM (JTA) – Growing up, Heidi Fishman knew that she was alive thanks to her grandfather’s Paraguayan passport.

A Jewish author from Vermont, she was told as a little girl that Heinz Lichtenstern’s passport was the only reason that her maternal grandparents and mother managed to avoid being sent to a Nazi death camp in occupied Europe.

But only long after his death did Fishman, 56, begin to wonder how the passport got to her grandfather, a Germany-born Jew with no known ties Paraguay.

“I never knew where the passport came from,” she said earlier this month at a lecture about her family’s survival story. “I just accepted the story from my mom: We had a Paraguayan passport. But where did it come from?”

This question last year led Fishman and others to lift from the shadows one of the most remarkable and large-scale Holocaust operations of its kind.

Partly thanks to the power of social networks, she learned last year that the passport was one of thousands of forgeries that a group of six Poles in Switzerland had risked their lives to prepare and distribute. Hundreds of recipients used the life-saving documents to escape genocide in Nazi-occupied Europe.

Known as the Bernese Group, the group operated in such secrecy that their actions remained undocumented for decades after the Holocaust. Yet they left enough evidence behind to allow researchers to compile a very detailed understanding of their efforts, according to Jeffrey Cymbler, a New York lawyer who has spent decades putting together a puzzle that was completed last year.

The six Bernese Group members “never told anyone about what they had done,” Cymbler said. “For decades, we knew only half the story.”

The full story, put together by Cymbler and a research team with help from the Polish government, involves four Polish diplomats in exile in Bern, Switzerland. They had conspired to make fake South American passports for Jews in Poland and beyond, and then delivered the documents, with help from two Polish Jews, to close to hundreds of recipients.

For the conspirators, the operation required bribing South American diplomats at the risk of being deported and handed over to the Nazis by the Swiss authorities — who were on to the rescuers’ game and not happy about it.

Cymbler has known since the 1980s about attempts to give Paraguayan passports to Jews from his family’s ancestral town of Bedzin in Poland. But he had no evidence of anyone using such passports to survive the Holocaust, said Cymbler, a genealogist and founder of the Bedzin-Sosnowiec-Zawiercie Area Research Society. 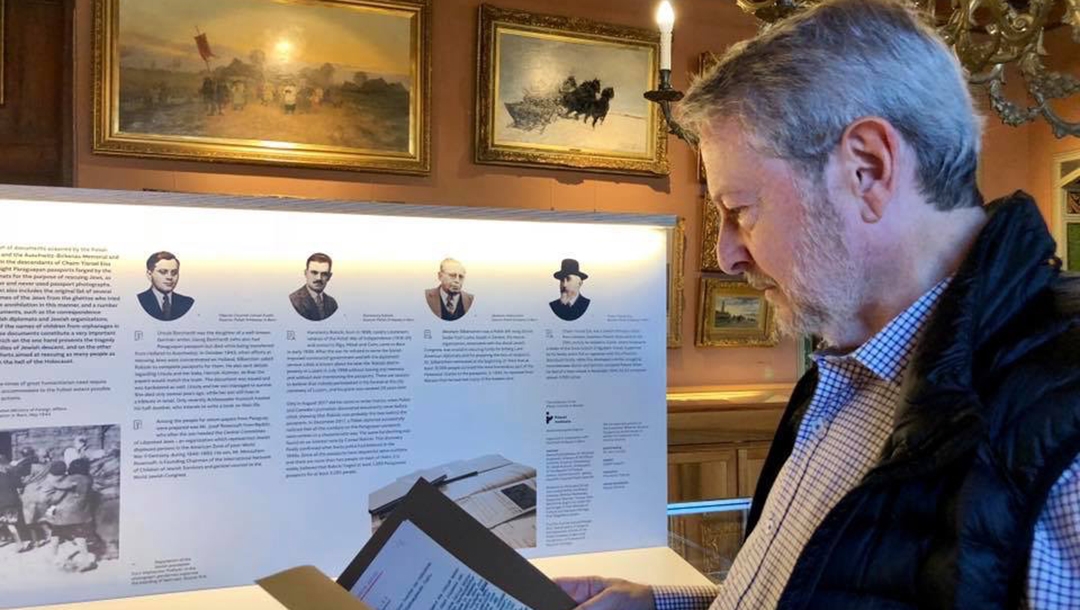 Jeffrey Cymbler examining documents tied to the Bernese Group in Switzerland in 2017. (Courtesy of Cymbler)

That changed last year, when he found on Facebook descendants of people like Fishman, who were actually saved thanks to the passports.

“Up to that point, I had basically thought the passports arrived too late to help anybody escape,” said Cymbler. His own great uncle tried to obtain a Paraguayan passport but perished with his family during the liquidation in 1943 of the Bedzin ghetto.

As evidence of the Bernese Group emerged, in declassified Swiss archives and elsewhere, the Polish embassy in Switzerland under Ambassador Jakub Kumoch set up a small research team. For  the first time it documented how the passports were produced, delivered and used to save people from right under the noses of the Nazi occupation forces and Swiss authorities.

The forgeries were made on genuine blank passport pages purchased illegally by the Bernese Group from diplomats like Paraguayan honorary consul Rudolf Hügli. Each blank passport cost hundreds of dollars, paid by the recipients. The Bernese Group, however, did not make any money off of the effort, Cymbler’s research showed.

A key Bernese Group member in this stage of the process was Konstanty Rokicki, a Polish vice consul in Bern, who was not Jewish. He filled out recipients’ details and forged other parts of the fake passports.

Rokicki had three Polish diplomat co-conspirators: Ambassador to Switzerland Aleksander Ładoś, his deputy Stefan Ryniewicz and attache Juliusz Kühl, who was the only Jewish diplomat in the group.

The diplomats obtained the names and at least some of the money for buying the blank passports from two Polish Jews living in Switzerland: Abraham Silberschein, a World Jewish Congress representative, and Chaim Yisroel Eiss, a Zurich-based businessman and activist for the haredi group Agudat Israel.

Contact with recipients was conducted by Alfred Schwarzbaum, a Jewish rescue activist from Bedzin who had managed to flee to nominally neutral Switzerland in 1940. Eiss, Silberschein and Schwarzbaum had the passports smuggled to recipients.

One letter, written by Cymbler’s great uncle to Schwarzbaum, feigned familiarity to him in order to send him passport photos without raising the suspicion of German censors, who would open and read all correspondence to and from the Bedzin ghetto.

“Dear Alf, how are your wife and kids? All is well with us, we’re well, working. To remember us, we’re sending you our photographs,” read the letter. The prints had on the back the names of the people pictured.

In some letters, recipients used Yiddish words to secretly keep the Bernese Group abreast of developments inside the ghetto.

“Uncle Geirush is coming this week,” one letter read, using the word for deportation. “We are awaiting the imminent arrival of our friend Malachamavet,” another read, meaning “the angel of death.”

For Cymbler’s great uncle, his wife and their two children, the passports came too late. They were killed during a deportation to Auschwitz. But hundreds used the passports either to escape the Nazi occupation or obtain foreign prisoner-of-war status that kept them out of the death camps.

Newly-declassified files from Schwarzbaum’s interrogation by Swiss police indicate that they had the Bernese Group firmly in their sights. All of its members has been detained for questioning at some point, raising the prospect of their deportation to occupied Poland by the Swiss, who were neutral but anxious not to anger the Germans.

The Bernese Group had gradually undertaken providing passports from additional South American states beyond just Paraguay to Jews in occupied Netherlands and even Germany itself. They were the center of an international conspiracy which the Germans would no doubt have crushed with the full force of the ruthless Gestapo secret police.

Any member of the Bernese Group sent back to occupied Poland would have almost certainly been executed, merely for being either Jewish or associated with the Polish government in exile, whose headquarters in London continued the struggle against the Nazi Germany.

The risk required such secrecy that many recipients of Bernese Group passports had no idea who made them, or even that they were fake.

This was certainly the case in the family of Heidi Fishman’s mother, Ruth. Deported in 1944 from Amsterdam to the Theresienstadt Ghetto with her father and mother, the family was withdrawn from death camp transports after showing a copy of their Paraguayan passport.

Before obtaining the exemption, Ruth’s father embraced her and wept in front of her for the first time in her life, in what he thought was a last goodbye, Heidi Fishman said.

The current Polish embassy’s interest in the case coincides with a broader effort by Poland to highlight the efforts of Poles who saved Jews during the Holocaust. Critics of that effort say it is whitewashing the actions of Poles who betrayed Jews to the Nazis or killed them.

The debate on Polish complicity — which was exacerbated by the passing last year of a law making it a crime to blame the Polish nation for Nazi crimes – was raging as Cymbler, Fishman and others were discovering the truth about the Bernese Group, Fishman said.

She said that at first she was “uncomfortable” working with officials representing Poland’s right-wing government, which some critics accuse of Holocaust revisionism.

“I didn’t want to be used as a puppet, as a Jew who says Poles did only nice things during the Holocaust,” she told the Jewish Telegraphic Agency. But so far, she added, “I have seen no attempt to use the Bernese Group story to push any narrative.”

Cymbler, the Jewish lawyer from New York who started researching the Bernese Group in the 1980s, says he does not think of his discoveries in the context of the current debate at all.

“It’s simply a question of learning the truth,” he said.

Kumoch, the current ambassador to Poland, has a different view. Whatever his wartime predecessor, Aleksander Ładoś, did, Kumoch said, “he did in the name of the Polish State. The State that fought the Nazis and tried to rescue its Jewish citizens.”