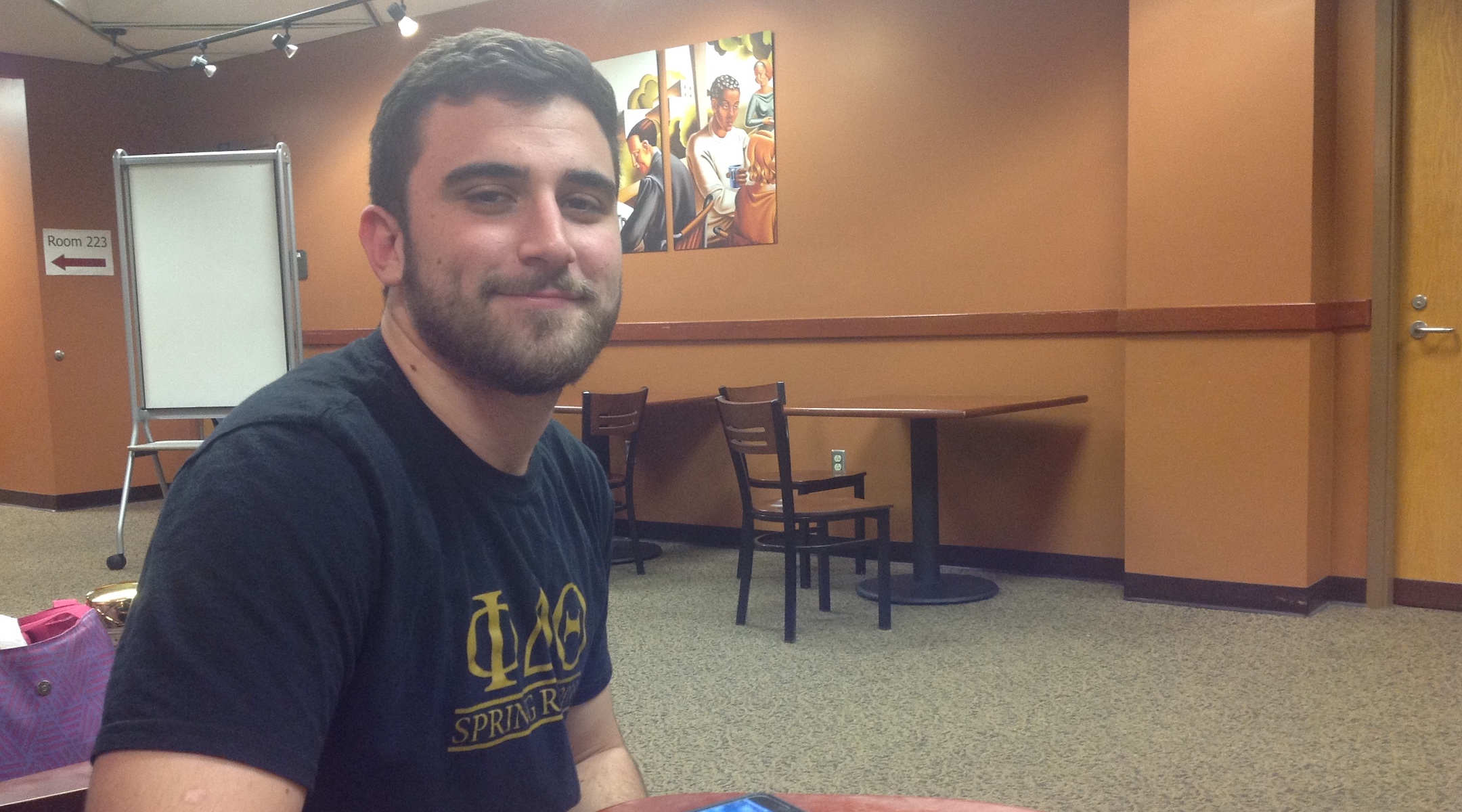 Josh Boloña, pictured sitting in his campus library, is the president of the Student Government Association at the University of Central Florida. (Ben Sales)
Advertisement

Then he tried to get his driver’s permit.

Boloña had an inkling a year earlier that his immigration status was complicated. A friend had invited him on a Caribbean cruise, but his mom told him he couldn’t go. She said it had to do with immigration and he left it at that.

But before he turned 15, his parents explained the issue: He was an undocumented immigrant.

“A week before my birthday, I asked my parents to get it and they again said I can’t,” he said about the permit. “So then they started explaining more in depth my status and saying what I can and can’t do. Then, the following year, we were thinking I would have to leave the country because I didn’t have any means to apply for college because I was undocumented.”

Shortly before, though, President Barack Obama instituted Deferred Action for Childhood Arrivals, or DACA, a policy that allowed undocumented immigrants who had come as children, like Boloña, to stay in the United States. DACA recipients can get drivers’ licenses, attend school and work.

So Boloña was able not only to go to college, but rise to the top. He is now the student government president at the University of Central Florida, the biggest undergraduate program in the country, with more than 50,000 students. The Student Government Association there manages a budget of nearly $19 million.

“I’ve always had a passion for servant-leadership and problem solving,” he said. “I figured that in SGA, that’s really what you do: You lead a group of fellow classmates — not with authority, but more with vision, which was nice. And ultimately you get to solve issues for students.”

Sitting at the UCF library, near a gushing fountain on the school’s sprawling campus here, Boloña looks and sounds like any student. The campus, replete with crisscrossing pathways, imposing classroom buildings and a bunch of parking garages, is buzzing with students at 9 p.m. on a balmy night in February. Many are wearing the school colors, black and gold, while displaying their pride in the Knights’ elite football team, whose 25-game win streak ended at the Fiesta Bowl on New Year’s Day. The library is crowded and not that quiet — that is to say, like a normal college library.

Boloña’s social media feeds feature plenty of photos of him looking official at school events, with a jacket and tie. On this Wednesday night, though, he is wearing a black-and-gold T-shirt from Phi Delta Theta, his fraternity. Like many senior men about to graduate, he has a beard.

A day earlier, Boloña was lobbying with other student officials in Tallahassee for internship opportunities. Now he’s on his way to a study group upstairs ahead of a test the next day.

He doesn’t make a big deal of his immigration status or what it means for a DACA recipient to become student president of the biggest school in one of the most politically divided states. If people should know one thing, Boloña says, it’s that DACA recipients are regular people — many of them, like him, leaders of their communities.

“If you really look at it from a logical way and you really try to understand who these people are, there really is no reason for it to be used as politics rather than fixing what should be fixed, which is the immigration system,” he said. “If you want to talk about it, let’s do it. With our generation, I know Republicans that support things like DACA.”

Boloña is originally from Guayaquil, a city of more than 2 million people. His father was born in Ecuador, too, and his mother in Venezuela — his three older brothers also were born there. The family moved to the United States just as he was about to turn 7 to seek a better life for the brothers, Boloña said.

His involvement in politics started in high school, where he served as junior class president of Marjory Stoneman Douglas High in Parkland, graduating four years before the mass shooting that took place there last year.

Boloña has fond memories of the school, and attended the student-organized March For Our Lives against gun violence last March in Washington, D.C. He’s pushed for a safety feature on the UCF student app.

“Over the past year there’s been a lot of hard times,” he said in a later interview, a day after the shooting’s first anniversary. “School safety has always been a priority. You can’t get an education without peace of mind.”

Aside from security, Boloña’s priorities as president have been expanding mental health care and career opportunities for students, as well as broadening legal counseling for students to include immigration questions. He and his running mate, Jad Shalhoub, won a runoff election last year against another DACA recipient, Karen Caudillo, with 56 percent of the vote.

Shalhoub, who like Boloña is an industrial engineering major, met Boloña in a statistics class when Boloña was soliciting signatures for a student senate campaign. The two had seen each other around the school’s Greek life, so Shalhoub, sitting in the front row of the classroom, decided to mess with him.

“I was pulling his leg, and I said out loud, ‘Don’t sign this guy’s petition!’” Shalhoub said. “I didn’t know how he would take it. He’s like, ‘You sit in the front? Nerd!’ At that moment, I knew we could tolerate each other.”

Boloña maintains a crammed schedule. The day after our interview, he would attend a UCF pedestrian safety meeting with county officials, an interview with a candidate for the chief justice of the student court, a senate session, meetings with a school senator, an engineering group and the Student Athlete Advisory Council — and class.

He does find time to unwind, playing the video game Mario Party with Shalhoub or watching anything from science programming to sports on TV (he calls himself “an addict”). He’s also found time to meet every few weeks with Yisrael Abisror, an Orthodox rabbi at the school’s Hillel, and discuss Jewish ethical texts. Shalhoub and Abisror both describe Boloña the same way: level-headed, thoughtful, laid-back, easy to get along with.

After graduation, Boloña will take a job with Accenture, the consulting firm, in Atlanta.

“I heard he was a guy to know,” Abisror said. “He listens, he’s able to take ideas and state them clearly. He’s patient.”

Boloña occasionally goes to Hillel and Chabad, and said that being Jewish has provided him with a moral framework in leadership and life. It’s also given him guidance in specific ethical dilemmas, like when his roommate found a few hundred dollars in cash and called Boloña to ask what to do. Boloña relayed a lesson he remembered from Hebrew school.

“He was like, ‘What do I do?’” Boloña recalled. “I was like, ‘First, try to see if someone’s around, whose it may be — making sure it’s actually theirs. If not, it’s all right to keep it for yourself. If you want to do a mitzvah, feel free.’”