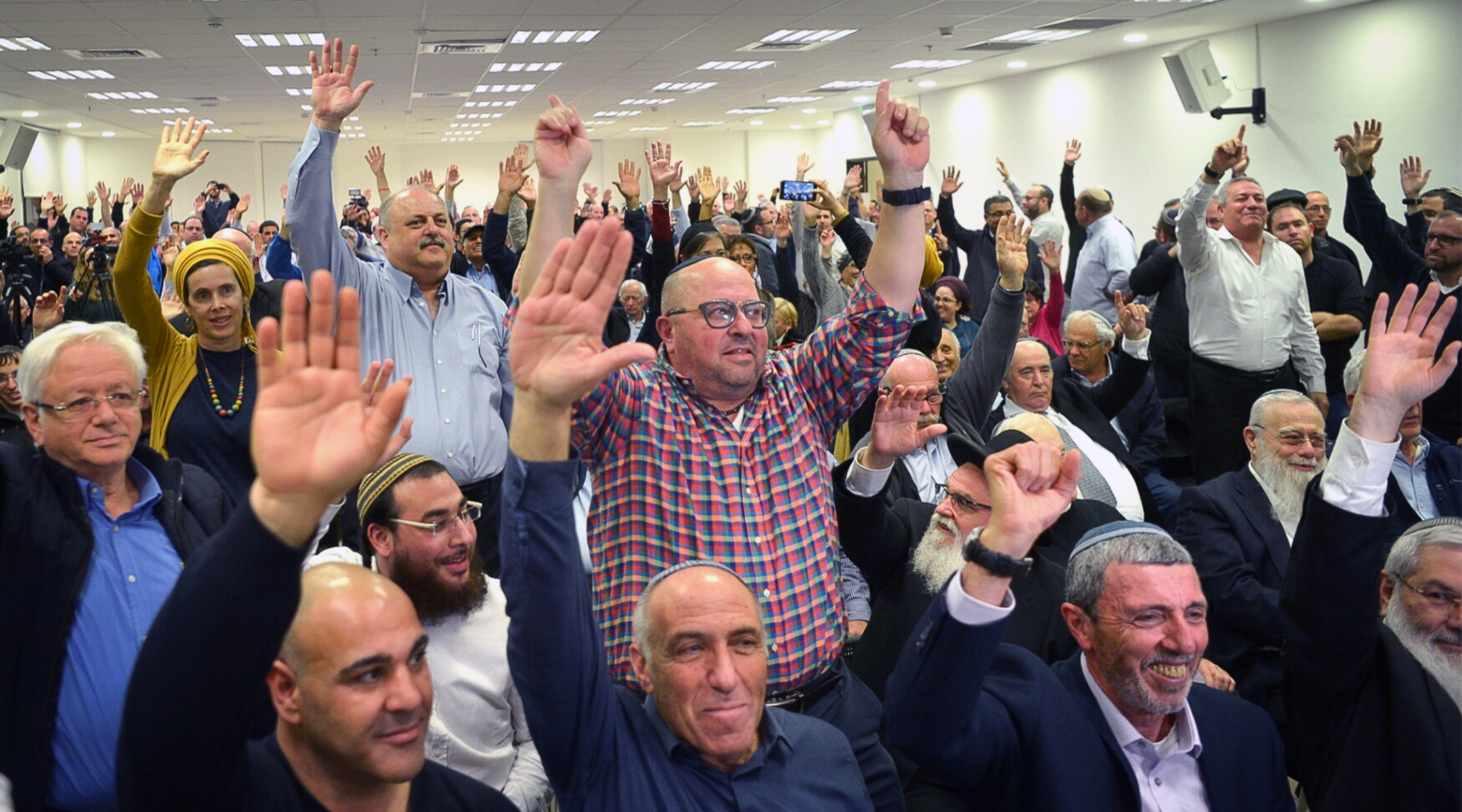 The Jewish Home party, the current iteration of what used to be Israel’s National Religious Party, votes on a pre-election alliance with Otzma Yehudit in Petach Tikvah, Feb. 20, 2019. (Yehuda Haim/Flash90)
Advertisement

JERUSALEM (JTA) – The Jewish Home party has made a moral error by creating a pre-election alliance with the Otzma Yehudit party, an anti-Arab group that ascribes to the ideology of the late Rabbi Meir Kahane. In doing so, Jewish Home will facilitate the entrance of a racist party into the Israeli parliament that will desecrate the name of the Torah and its genuine followers.

The good news, however, is that despite its self-identified status as the party of religious Zionists, Jewish Home hasn’t really represented the broader religious Zionist public for some time, and its mistake now may present an opportunity for renewal and rejuvenation within this sector.

As a political movement, religious Zionism is often seen as a driving force behind the settler movement and a source of Zionist enthusiasm with a hawkish tinge. Yet as Israeli journalist Yair Ettinger has noted, the group is far from homogenous – and the political party that claims to represent it was on the verge of obsolescence for several elections.

Jewish Home and its predecessor, the National Religious Party (Mafdal), has roots in the Mizrachi movement, which represented the original religious Zionist movement well before the State of Israel was founded in 1948. However, the majority of religious Zionists today don’t actually vote for the party. In the 2013 and 2015 elections, for example, according to estimates, only 35-40 percent of the national-religious population voted for Jewish Home. Many voted for Likud, a few for the Sephardic haredi Orthodox Shas party and others for a range of parties in the center-right of Israel’s electoral spectrum, like Yesh Atid.

The religious Zionist community has significantly grown to approximately 10-12 percent of the total population. Yet by the 2006 elections, Jewish Home rightfully feared that it wouldn’t cross the electoral threshold, so it created mergers with other small right-wing parties that comprise the National Union party. In 2009, when merger attempts failed, Jewish Home barely passed the threshold.

In 2013, Naftali Bennett reunited and rebranded the religious Zionist parties under Jewish Home, reaching 9 percent of the general vote by managing to garner votes from both religious and secular Jews.

Yet this success did not repeat itself in 2015, with Jewish Home receiving only 6.7 percent of the general vote. Further attempting to reach voters turned off by strong rabbinic influence, Bennett and Ayelet Shaked formed a new religious-secular nationalist party, The New Right, last month.

Why has the Jewish Home-National Union alliance not succeeded in expanding its reach? In addition to not drawing enough nonreligious voters, the diverse religious Zionist sector does not vote for it in masses. Much of the national-religious public at large, unlike the haredi public, does not apparently see a great need to be represented by a party aligned with their own sect. This may stem from people not identifying with its eclectic mix of religion and nationalistic public policy, or because it prefers supporting larger parties like Likud that will ensure a right-wing prime minister.

Much of the religious Zionist public is largely integrated socially and economically within broader Israeli society and does not feel that its own interests need special representation. The religious Zionist community serves in the army and workforce at the same rates as the general population, and many religious Zionists prefer integration in the political realm as well.

This is not to say that religious Zionists have abandoned Jewish Home. Some have loyally continued to vote for the party because they believe it will ensure government support for sectorial institutions and religious services. Equally important, they think it will maintain certain religious and Zionist values in the public sphere, including basic biblical teaching and traditional Zionist values in Israel’s education system. The new head of the party, Rabbi Rafi Peretz, claims to want to continue this legacy.

Politics, it is often said, is a combination of idealism and realism. Elected officials may go into office hoping to positively impact the society with their values, but need to make alliances and compromises to get elected. In Israel’s parliamentary system, the parties can maintain their alliances after the election, but they also have regularly broken apart and formed smaller factions within the Knesset. Jewish Home leaders have promised this will happen, deeming the alliance as a “technical bloc” for electoral purposes alone. This also would allow Netanyahu to invite Jewish Home to join the coalition while excluding Otzma Yehudit Knesset members.

Yet what’s the point of a values-based ideological party if you are willing to partner with those whose values strongly clash with your own? Religious Zionist parties over the years have broadly rejected Kahane and his beliefs in expelling Arabs from Israel and violently harassing Israeli Arabs. Why now facilitate his followers to enter the Knesset? The answer, in part, is that Peretz was convinced by a skilled politician, Prime Minister Netanyahu, that it was necessary – that without the Jewish Home-Otzma Yehudit alliance, the party would not garner sufficient votes to pass the electoral threshold.

It’s not clear that this is true, but it is clear that votes for the right – in support of Netanyahu himself staying prime minister – would be lost without this union, making it difficult for him to be reelected and build a right-wing coalition of 60 seats. This alliance stemmed from realpolitik, at its best – and worst.

The simpler answer is that some limited elements of the “religious-right” within the national Zionist sector – especially those represented by the National Union party – are comfortable voting in one or two Jewish racist provocateurs if it means saving their own representation. That’s a choice of values, indicating a willingness to allow into the Knesset – under the religious Zionist banner – a disgusting distortion of what Judaism stands for. While perhaps a politically canny move, it’s hard to assert that you’re an important bastion of Jewish values when you help get elected those who adulate the mass murderer Baruch Goldstein.

Yet the truth is that many religious Zionists who are infuriated about this decision aren’t necessarily planning to vote for the Jewish Home party anyway. Some were planning on voting Likud, a few for the new centrist party, Blue and White, and I suspect that many more will support Bennett and Shaked’s new party that calls for a new religious-secular alliance and reforms on religion-state dilemmas.

The uproar highlights not only that much of the religious Zionist community does not support this problematic alliance, but also that the community is variegated and has not been represented by one party for many years. It presents an opportunity to create new bridges in other parties with other sectors of Israeli society that need to be cultivated to strengthen Israel’s religion, social and moral fabric.

In the meantime, judicious religious Zionists need to make clear what’s been quietly known for sometime: The religious Zionist political parties do not truly represent them, and that was even true before this realpolitik alliance betrayed the values of the movement. Our votes should show that parties running under the banner of ideology do not deserve support when they compromise core values and don’t represent their alleged constituents.