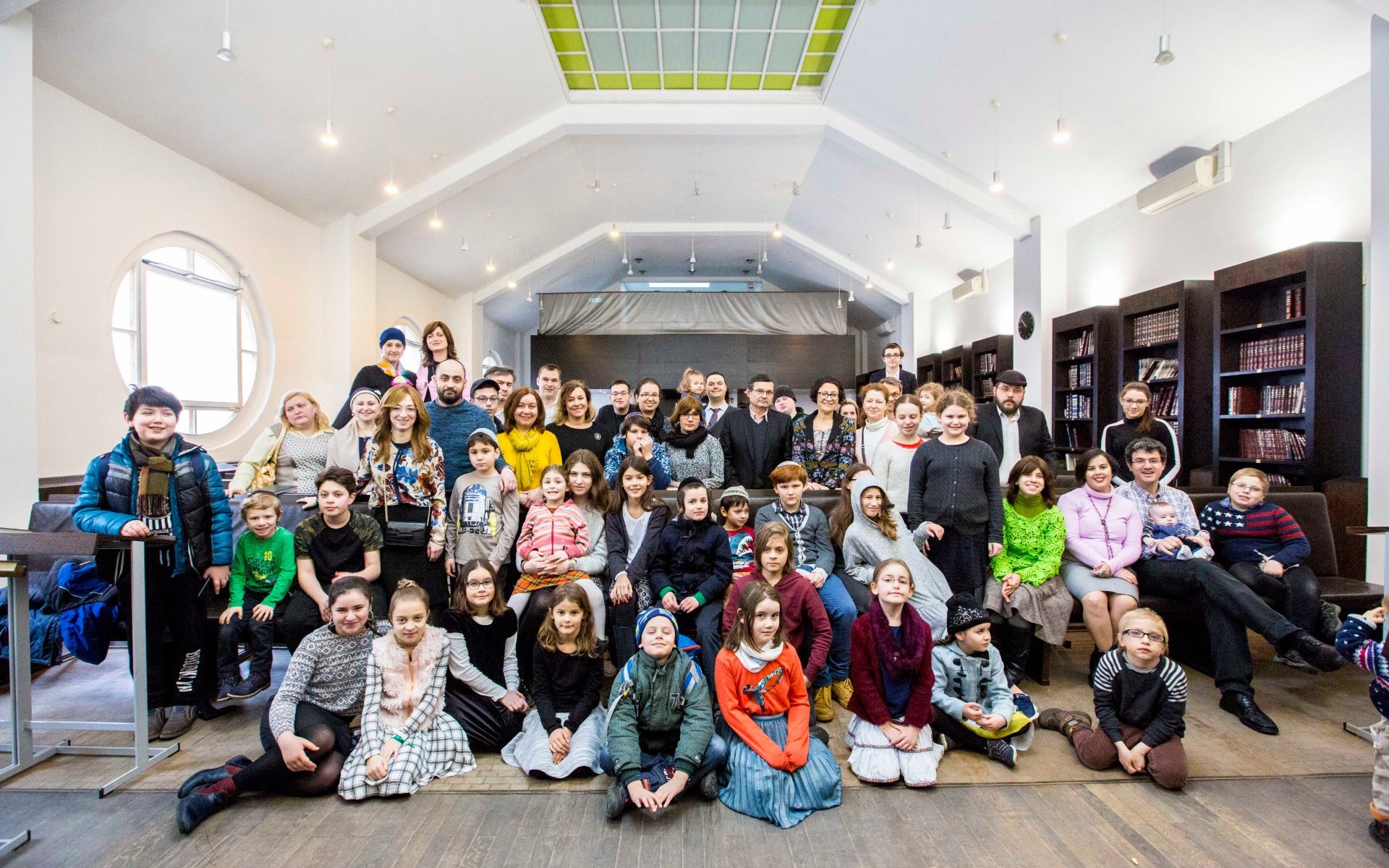 The video-based learning program for European Jewish students is supplemented by in-person encounters like this Shabbaton in Berlin in March 2018. (Lauder Foundation)
Advertisement

When Jewish physicist Vladimir Osipov emigrated from his native Moscow 13 years ago, he first moved to Holon, a city in central Israel.

But it wasn’t until Osipov relocated with his family three years later to a mid-size city in Germany that they felt part of a vibrant Jewish community.

It wasn’t because of the preponderance of Jews in Duisburg, a city of about half a million people in Germany’s western Rhineland region. On the contrary, there are only about 2,500 Jews spread out across Duisburg and two neighboring cities.

In fact, the Osipovs’ main Jewish connection isn’t to their local Jewish community at all, but to a largely virtual one created by a Jewish day school in Berlin.

Osipov’s 12-year-old son is a student in a distance-learning program run out of the Lauder Beth Zion School of Berlin. The program, part of the Lauder e-learning network, teaches online courses in Hebrew and Jewish studies to students in outlying areas that don’t have local Jewish educational opportunities.

In an effort to reach out to a largely immigrant Jewish population that often lacks basic knowledge of Jewish life, the program also offers online courses and regular gatherings aimed at parents.

“This really changed my life,” Osipov said. “We don’t work on Shabbat now. In spite of the fact that we were in Israel, we were surrounded by non-religious people. Nobody invited us to participate in celebrating Shabbat. Here in school was the first time I took part in Shabbat and synagogue, with singing, reading Torah. This was the first time, and I enjoyed it a lot.”

Since 1987, the Ronald S. Lauder Foundation has been working to rebuild Jewish life in Central and Eastern Europe, opening schools, kindergartens, youth centers and summer camps in areas devastated by the Holocaust. With the launch of its online learning platform in 2012, the foundation focused on bringing formal Jewish education to areas where the Jewish presence isn’t large enough to sustain a brick-and-mortar facility.

Begun in Poland in 2012, the Lauder E-Learning Schools now provides online instruction in Hebrew and Jewish studies to more than 250 students in six European countries.

This isn’t some automated, computer-based learning program. Rather, it connects students via video with real teachers and other students in far-flung areas for live, video-based classes and discussions. Instructors teach the students in their native language and interact with them in real time. The program also brings children and their families together in person multiple times a year.

The program is entirely free of charge, and each participating student receives a tablet computer that permits two-way video, so the instructor can see the kids and vice versa.

“The Lauder Foundation saw that they were catering for people in capital cities, but there were still many children living outside of these cities where it was not possible to go to day schools,” said Gafna Ganova, one of the deputy directors of the Lauder school in Prague, whose e-learning program educates 42 Jewish kids ages 7-18. “So we created a program for families that either live in other communities where there are no Jewish schools or who live completely detached from the Jewish community.”

One of those families is the Syka family, which moved from Prague to Pretoria, South Africa in 2016 when Anna Syková took a position at the Czech embassy there. Without a Jewish school in the South African capital, David Syka worried that his daughter, who was then about to start first grade at the Lauder school in Prague, would fall behind.

“For me, it was important that when we come back to the Czech Republic they will need to be at the same level as other kids in their classes,” said Syka, whose two children take Hebrew lessons online twice a week with a Czech-speaking instructor. “So it was important for them to start with Hebrew.”

In Germany, where over 100 students from 36 cities participate in e-learning, the program offers a wide range of learning opportunities, including a special track for bar- and bat-mitzvah age teenagers that culminates in a trip to Israel, and a program for older teens called J Teens, in addition to adult learning. The 100 spots for this year’s Berlin Shabbat gathering sold out within hours, and the long waiting list prompted the foundation to seek out additional capacity.

Julia Konnik, who coordinates the e-learning program in Germany and teaches several classes, said the program has created lasting bonds between participants. She acknowledged, however, that it’s not always easy to hold student attention in an online classroom.

“You need to give your energy over so they will be energized,” Konnik said. “They need to see the sparkle in your eyes. Every second they’re watching you. One may think that you just sit in front of the computer like you’re watching Facebook or something. It’s totally not the same. To do it well, you need to give a lot of energy.”

In addition to Poland and Germany, Lauder e-learning programs are available in Slovakia, Hungary and Greece. Because many Jewish parents themselves lack Jewish knowledge, some of the programs also include online courses for adults.

Because the programs are aimed at families who live in places with limited access to Jewish life, the foundation brings families together several times a year for weekend gatherings where they attend synagogue services, enjoy Shabbat meals and go on outings. For many participants, it’s a rare opportunity to experience Jewish life and form enduring social connections with other Jewish students.

“Jewish life outside of Prague is not easy,” said Leo Pavlat, the Lauder foundation representative in Prague and the director of the Prague Jewish Museum. “Not because of the official obstruction, but because of the missing structure of Jewish life. These communities are very small ones. They have difficulties making a minyan. E-learning is the only way these kids encounter Judaism.”

For Petr Papousek, the current president of the Federation of Czech Jewish Communities, who lives some 150 miles from Prague, in Olomouc, the e-learning program provides the only formal Jewish education for his two children, ages 12 and 10. Some 150 Jews live in Olomouc, which boasts a synagogue, community center and a kosher kitchen — but no school. The Papouseks are one of just three traditionally observant families in Olomouc.

“The impact is huge, because without such a program most of the kids from the assimilated families — they wouldn’t be able to have any Jewish education,” Papousek said. “In this small country, we have 2,800 people registered in the Jewish communities of the Czech Republic. We count every soul. And as many souls are involved, we are happy.”