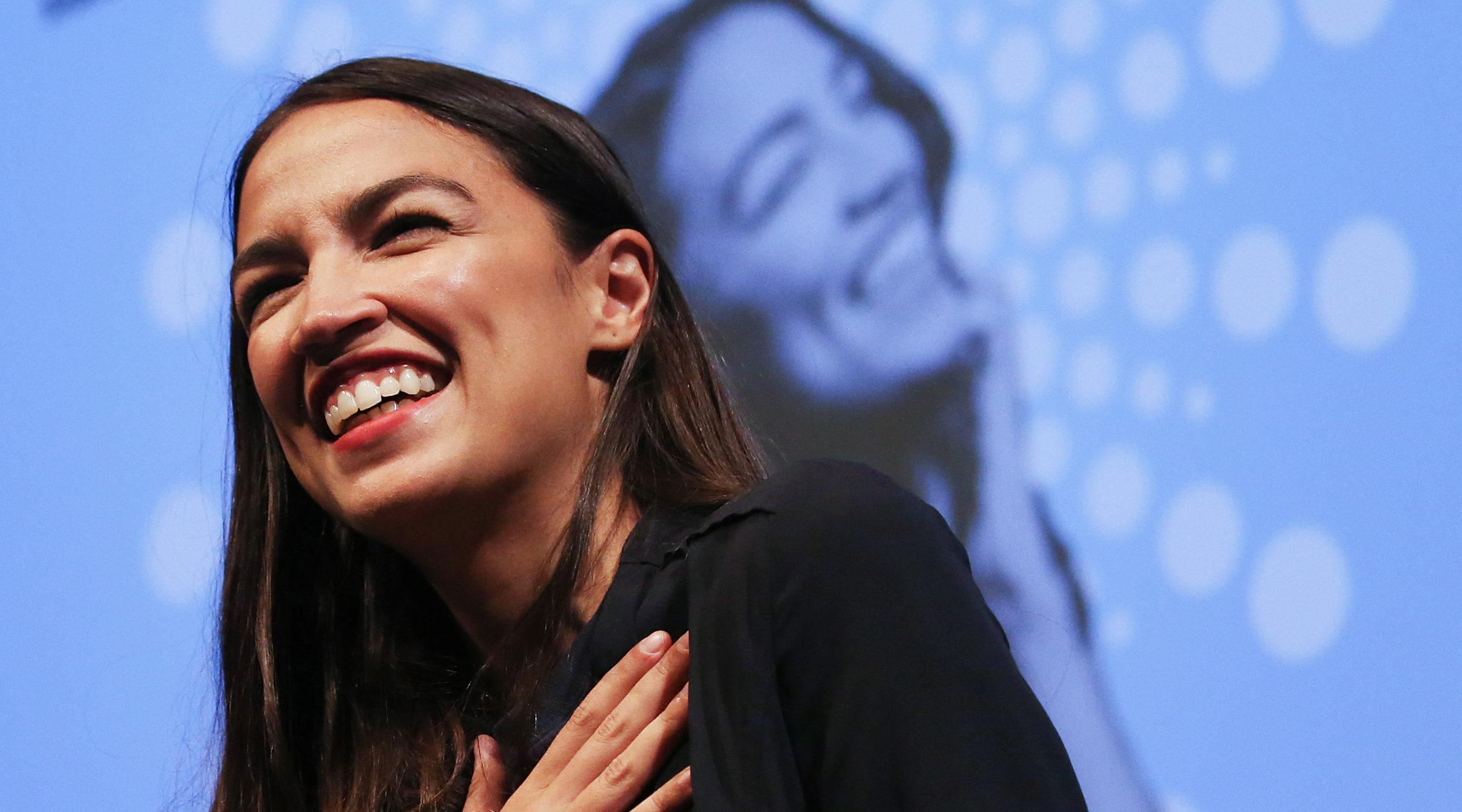 (JTA) – There are few issues about which Alexandria Ocasio-Cortez, the freshman Democratic congresswoman from New York, and I would likely agree. She is regularly and rightly characterized as a “progressive,” which, I suppose, makes me, a citizen of staunch conservative bent, a “regressive” (though I prefer “traditionalist”).

But my rejection of any of Ocasio-Cortez’s domestic positions aside, it bothers me that so many of my fellow supporters of Israel reflexively lump her together with Reps. Rashida Tlaib and Ilhan Omar, the newly installed representatives from Michigan and Minnesota, respectively. Yes, they’re all women, Democrats and people of color. But can we all manage a bit more discernment?

Tlaib and Omar have made statements that tellingly reflected hoary anti-Semitic tropes. Both, moreover, are proponents of BDS, the movement to boycott Israel, and favor a one-state solution to the Israeli-Palestinian issue, meaning the dissolution of Israel as a Jewish state.

AOC, as some have taken to calling the New York lawmaker, has done none of those things. Yes, last spring, after being moved by images from Gaza, she tweeted her chagrin at what she characterized as a “massacre” and referred to the “occupation of Palestine” — both uninformed and ugly statements.

But to her credit, after being informed of some facts, she quickly acknowledged that she is “not the expert” on the Middle East and promised to “learn and evolve” regarding Middle East affairs. To me, that was a refreshing admission, one that should be gracefully accepted. She hasn’t made any similarly Israel-negative references, has strongly declared her affirmation of Israel’s legitimacy and favors a two-state solution.

Yet we read in The New York Times how Stephen Fiske, a former AIPAC activist, encourages “pro-Jewish voices to speak up” against not only Omar and Tlaib but also Ocasio-Cortez — “three people” who, he hopes and predicts, “will not be around in several years.”

In a popular Orthodox Jewish newspaper, a columnist described the three women as an “Axis of Evil,” with AOC its “most conspicuous” member.

There seems to be a determined effort to find some evidence, frail though it may be, of anti-Jewish or anti-Israel sentiment in AOC.

Last November, she was accused by some of sinning against the memory of the Holocaust by comparing what European Jews suffered in the 1930s to the plight of Central American migrants.

Whatever one may think about current immigration laws, there is no denying that the U.S. has long offered asylum to people from afar who can reasonably demonstrate that their lives are endangered in their native lands. Did AOC, by including the Holocaust era as one example, thereby sully its memory? Not in any reasonable person’s mind.

More recently, it was reported that Ocasio-Cortez has “defended” her fellow progressive, Omar, for the latter’s ugly statements. There was, though, not a word of any such defense of the others’ anti-Semitic sentiments in AOC’s protest, which was not about Israel or Jews but rather about double standards (something often, and rightly, in another context, denounced by us Israel defenders).

What AOC decried was the move by the House leadership to respond to Omar’s use of anti-Jewish stereotypes by dedicating an official resolution to the subject of anti-Semitism.

“Where,” she asked, “are the resolutions against homophobic statements? For anti-blackness? For xenophobia? For a member saying he’ll ‘send Obama home to Kenya?’” (The latter was a reference to comments made by Rep. Mark Meadows, a North Carolina Republican, in 2012.)

“No one,” she continued, “seeks this level of reprimand when members make statements about Latinx + other communities (during the shutdown, a GOP member yelled ‘Go back to Puerto Rico!’ on the floor).”

She was admitting that Omar deserved a measure of “reprimand,” just not, in her judgment, one that hasn’t been used in other contexts where she feels it was likewise warranted. One need not subscribe to any equating of age-old, blood-soaked anti-Semitism with other prejudices to at least appreciate – if not necessarily agree with – her point.

“Man sees what is before his eyes; God alone sees into the heart” (Samuel I, 16:7). I don’t know, and no one likely does, what feelings Alexandria Ocasio-Cortez holds in her heart about Jews or Israel. Maybe one day, God forbid, she’ll join her anti-Israel colleagues and support BDS and a one-state solution. Maybe she’ll appear on the House chamber floor waving a Palestinian flag and brandishing a copy of the “Protocols of the Elders of Zion.”

But unless and until she does, fair-minded Jews and Israel supporters should contemplate the fact that every person – even a “progressive” – deserves to be judged impartially. And that it is Jewishly wrong, not to mention counterproductive, to do otherwise.