German Jews are all in with a Catholic Carnival tradition 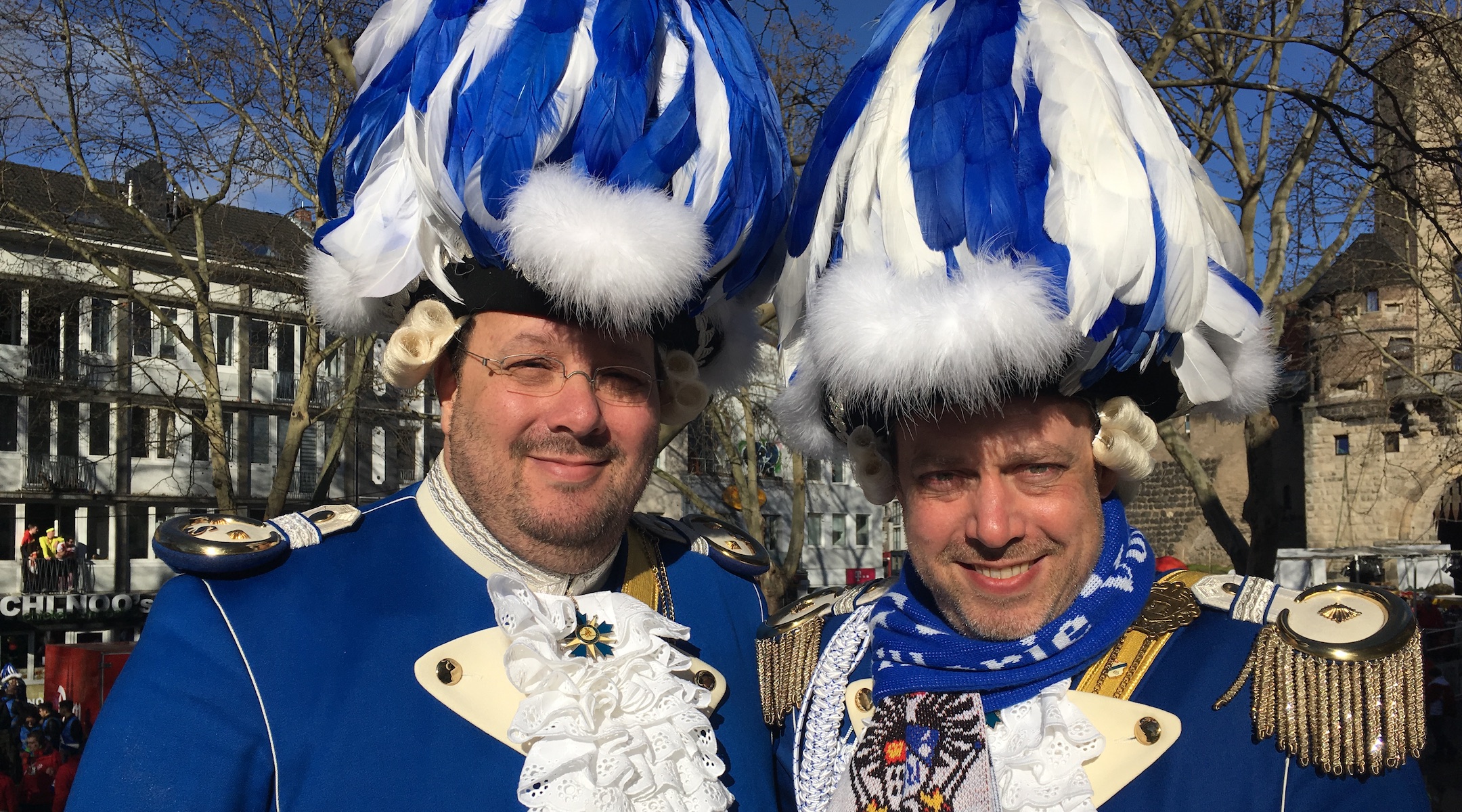 Brothers Patric and Frank Levy, aboard their club's float at the Cologne carnival, or Rosenmontag, March 4, 2019. They are part of a Jewish carnival club that doesn't yet have its own parade float. (Toby Axelrod)
Advertisement

COLOGNE (JTA) —  There is no direct religious connection between Purim and Carnival, which ushers in the Catholic season of Lent. But some comparisons may be drawn: Both holidays involve dressing up, holding pageants, sharing goodies and drinking alcohol.

In Cologne, Germany, at least, those ties are even closer now that a Jewish carnival club has been established, with its members for the first time since the 1930s joining the revelry under the banner of their own very club.

The Kölsche Kippa Köpp (literally, the Cologne kippah heads, or keppels, for you Yiddish speakers out there), was officially launched earlier this month with a festive meal and speeches at the Roonstrasse Synagogue.

The Jewish club even has its own special head-covering: a blue and white tam with a flap that lifts to reveal a Star of David and the travelers’ prayer on a red background.

So far, the club boasts 14 members, says its president, Aaron Knappstein, 48. Applications are coming in.

The annual celebration draws hundreds of thousands to Cologne’s streets and pubs and to the Rosenmontag parade, one of Europe’s largest. Hundreds of floats associated with different clubs wend their way through the thronged streets; costumed celebrants perched on the floats fling sweets into the open arms – or windows – of revelers along the route.

“Virtually everyone who has a position in Cologne in politics, culture, economics is a member of a carnival club, because it is part of the general culture of the city,” said Knappstein, who works for an organization that helps refugees, and volunteers at Cologne’s National Socialist Documentation Center. 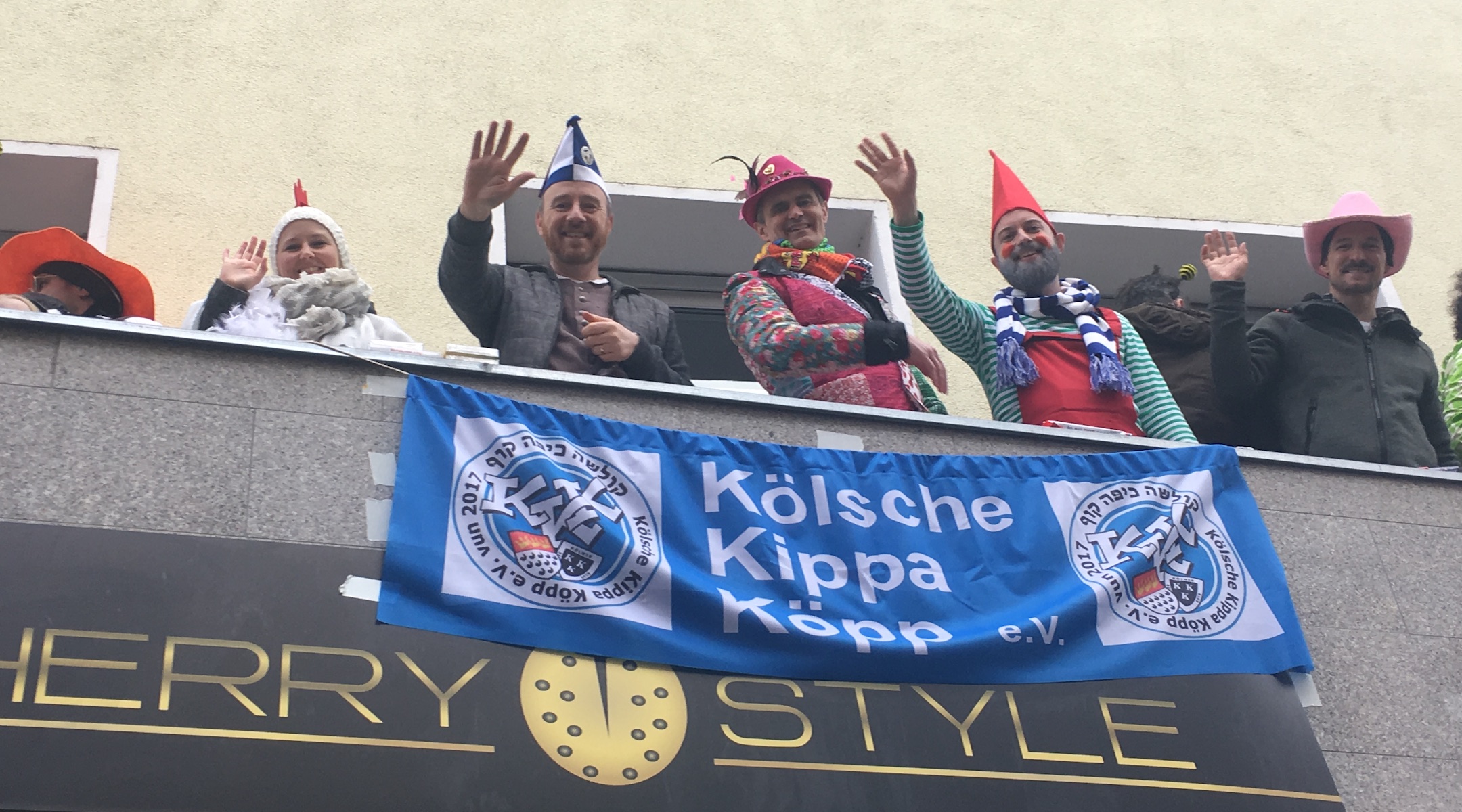 Aaron Knappstein, in blue and white tam, watches Cologne’s 2019 carnival parade with friends. Kölsche Kippa Köpp (literally, the Cologne kippah heads) is a revival of a Jewish carnival club that has not operated since before the Nazi era. (Toby Axelrod)

By day, streets are filled with people of all ages and ethnicities, some wearing brightly colored wigs, many dressed as animals. A man in a kangaroo suit with a joey in his pouch; a clutch of nuns and priests whose gender is not immediately evident; a man apparently perched on the shoulders of Donald Trump.

“A few years ago I saw someone wearing a costume as an Orthodox Jew,” recalled Knappstein, who donned a Scottish kilt on Rosenmontag.

For the Jewish club members, you could call Carnival a dress rehearsal for Purim, which this year falls on March 21.

“You have to dress up, and free your mind, and show that it is OK to be different,” said 47-year-old Cologne native Robert Katona, beer in hand, at the club launch the day before the parade. “That’s also what Purim is about: We survived and we show that we’re happy.”

“I grew up in Cologne, and used to ask myself why the Jewish community wasn’t celebrating carnival like I do,” said Dieter Beumling, 58, a graphic designer who created the new club’s hat. “I found out that that some Jews really are celebrating like I do!”

“The idea of a Jewish club, that my father and others made it happen, makes me really proud,” said Beumling’s daughter Amit, 25. “Jews were not allowed to be part of it under the Nazis. And now we have our own voice.” 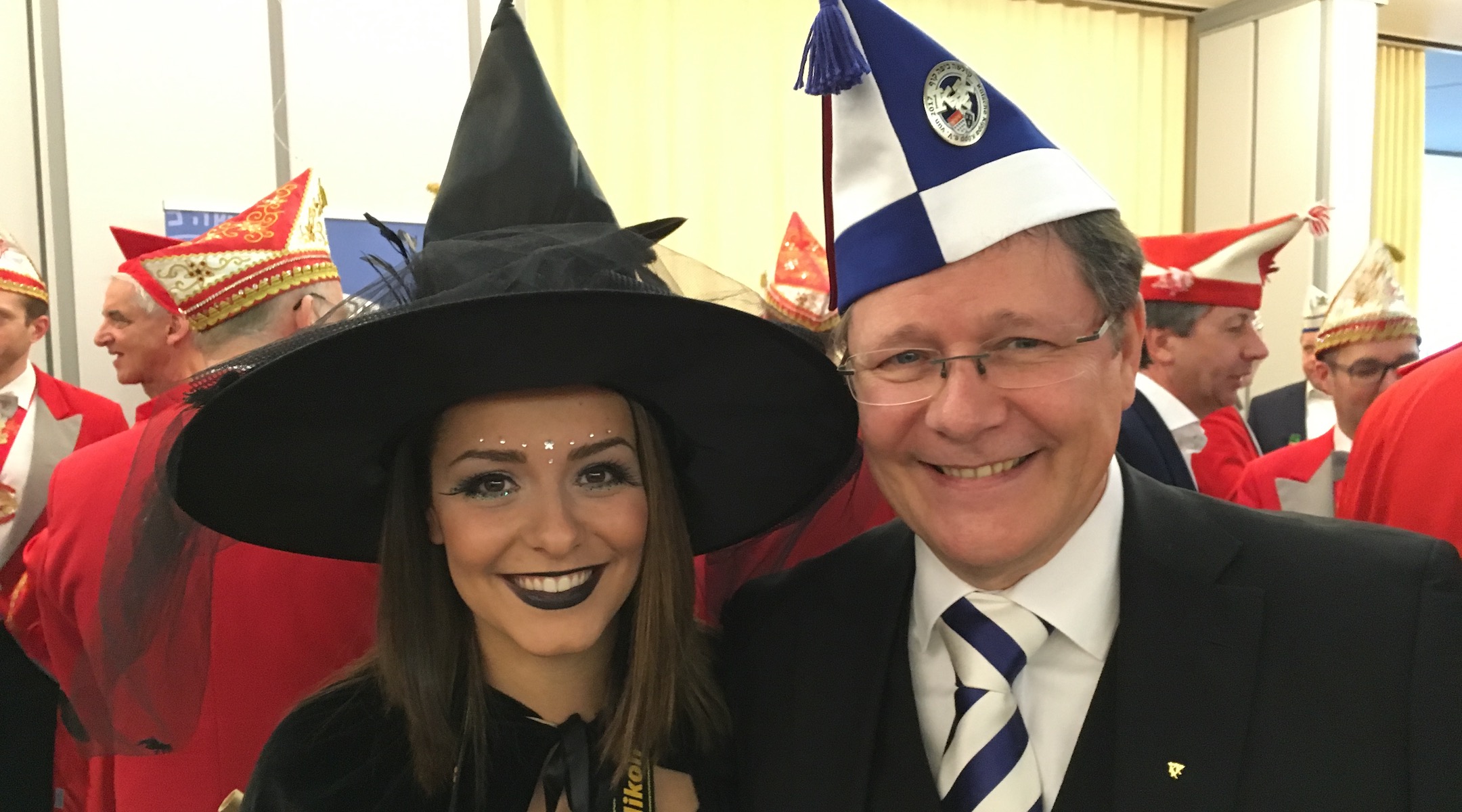 The Jewish club doesn’t yet have its own float, but all in good time, Knappstein said.

“It’s kind of a miracle that we exist at all,” he said.

“We don’t want to be only associated with anti-Semitism,” said synagogue board member Bettina Levy, dressed convincingly as the Mexican artist Frida Kahlo. “We are also about having fun.”

A “driving force” behind the Jewish club, said vice president Patric Levy, is himself not Jewish: Carnival Festival Committee President Christoph Kuckelkorn, who runs his family-owned funeral home business, is a fan of Israel and is close to the Jewish community.

“He knows many Jewish carnivalists in different clubs, and he tried to get them together,” said Levy.

For all the high spirits, a darker story was not far from the members’ thoughts.

But by 1923, with Germany in a post-World War I economic crisis, Jews were scapegoated and rejected from mainstream carnival clubs. It was then that Jewish carnivalist Max Salomon co-founded the Kleinen Kölner Klub (Little Cologne Club), which had begun life as a Jewish Kegel (bowling) club. The Kleinen Kölner Klub even hosted masked balls in those days.

(The new club’s unfortunate KKK initials are a tribute to the Kleinen Kölner Klub, members point out, and not to the Ku Klux Klan.)

But after 1930, Jews disappear from carnival records. Under the Nazis, the only reference to Jews in the carnival was in anti-Semitic floats (a noxious tradition revived earlier this year during a Belgian carnival parade).

Several of the original Cologne Jewish club’s members were deported and murdered by the Nazis. Others, like Tobar and the Salomon brothers Max and Willi, emigrated to the United States or Palestine, and even continued carnival traditions in exile. This year, on March 18 and 19, stumbling stone memorials – inscribed brass blocks, a project started in 1995 by Cologne-based artist Gunter Demnig – will be set into the sidewalks at the last Cologne addresses of Tobar and the Salomon brothers.

The first post-war carnival was held 60 years ago, in bombed-out Cologne.

“People stood on mounds of rubble to watch,” said Leifeld.

“Whenever you decide to live in a certain society, you are part of this society,” said Katona, grandson of Holocaust survivors from Eastern Europe. “It doesn’t mean we forget. We still have it in mind. But we have to continue our lives, and we have to show it.” 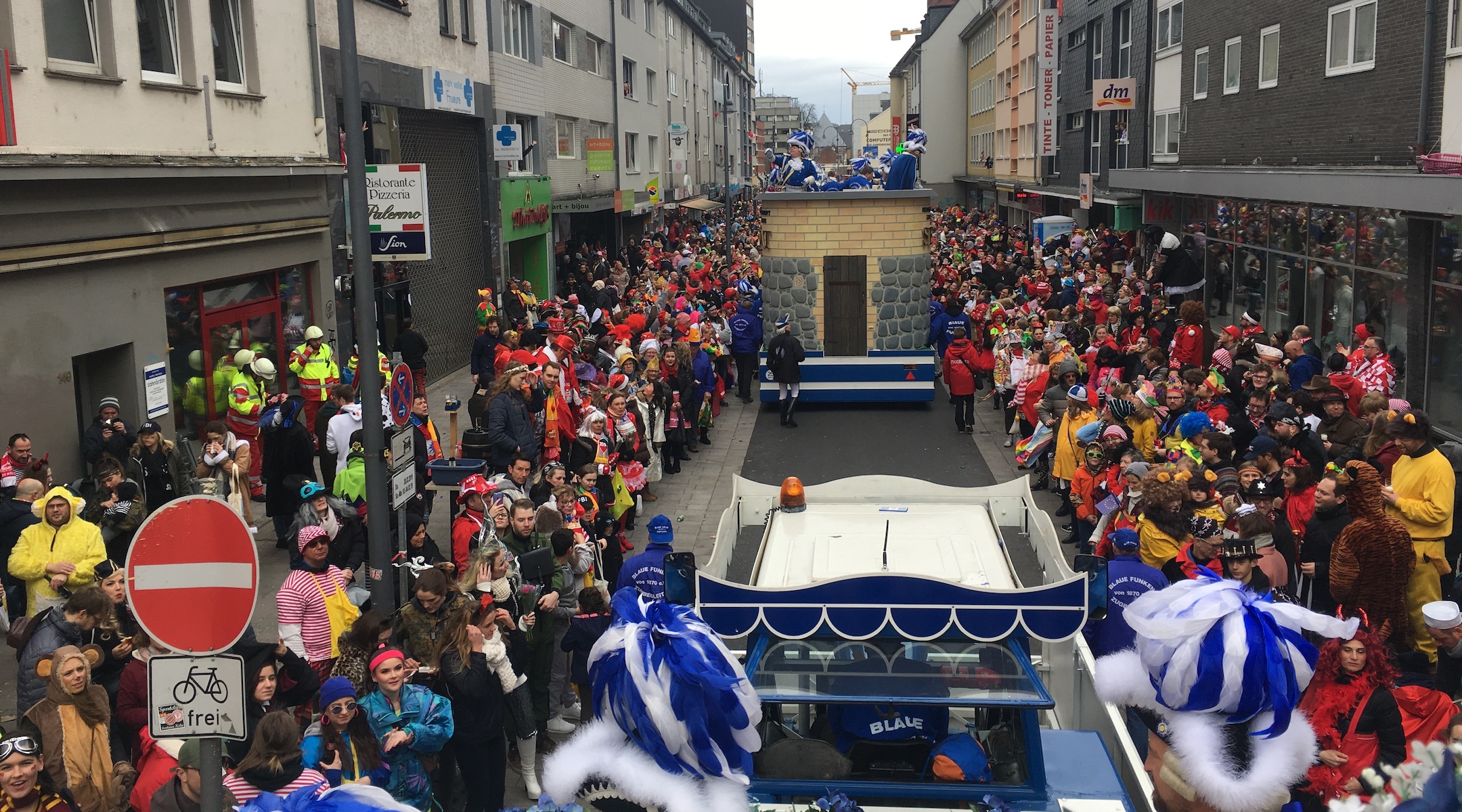 A view from the Blaue Funken (Blue Sparks) club float during Rosenmontag, the carnival parade held in Cologne, Germany on March 4, 2019. (Toby Axelrod)

Show it they did: On the morning of Rosenmontag, brothers Patric and Frank Levy – dressed in the blue, double-breasted suits and feathered hats of their Blaue Funken (Blue Sparks) club – climbed aboard their float and prepared to jettison some 2,500 chocolate bars and caramels and hundreds of bouquets into the hands of an eager public.

As the float wobbled its way under the medieval Severin Gate near Chlodwigplatz, the start of the parade, the cheering grew louder. Cologners crowded the streets, sat on their windowsills, legs dangling down. Some held out baskets or fishing nets: “Caramels, caramels!” Grinning broadly, the brothers obliged.

A mile or so away, Knappstein hosted a party on his balcony overlooking the parade route. For four hours, floats passed by; the haul of goodies was formidable.

At one point, a band leader noticed the banner hanging from Knappstein’s balcony: Kölsche Kippa Köpp, in German and Hebrew. He held out his hand to stop the music, looked up to the balcony and saluted: “Shalom!” And marched on.