Is Donald Trump campaigning for Netanyahu? 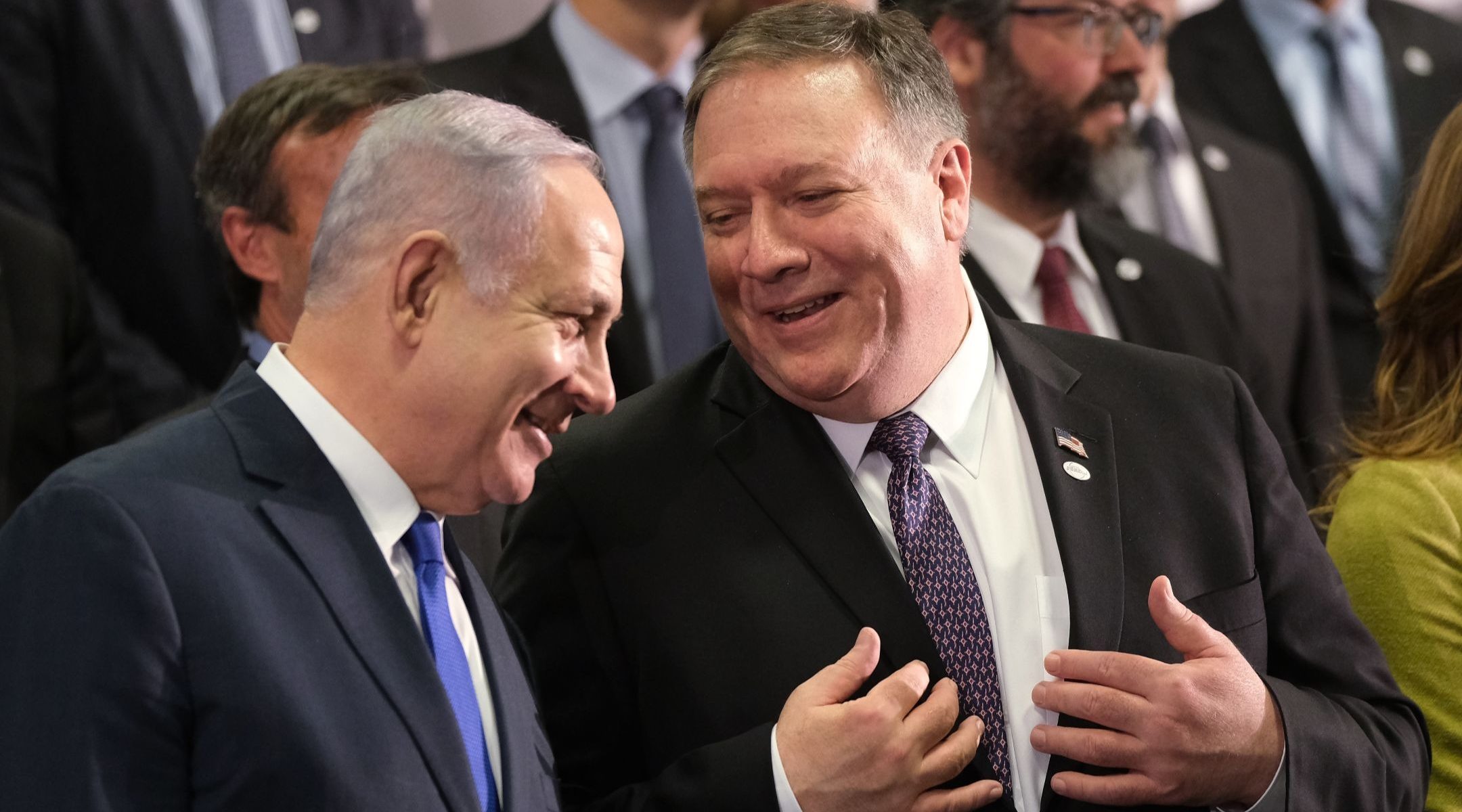 Earned media is the exposure a candidate doesn’t pay for. Trump, by virtue of his celebrity, outspokenness and outsider status earned plenty of it during the 2016 election. The investor newsletter The Street estimated that Trump got $5 billion in earned media in that campaign, more than Hillary Clinton, Bernie Sanders, Ted Cruz and Marco Rubio combined.

Netanyahu, facing a credible challenge on April 9 from Benny Gantz, the former military chief of staff who heads the new Blue and White party, is about to get a cascade of earned media thanks to Trump.

Next week, two weeks before Israel holds elections, its prime minister gets not one but two days at the White House (usually, leader-to-leader visits can be wrapped up in a day) and a “first couples” dinner. On Wednesday, Netanyahu picked up face time and lavish praise from Secretary of State Mike Pompeo, who was in Israel for a visit. Last month, Trump posted a Netanyahu campaign poster — a massive banner featuring Trump and Netanyahu shaking hands — on his Instagram account.

Is this unusual? And why is Trump doing this? Here are some answers.

It’s not unprecedented — but it is rare.

President Bill Clinton went all out to keep Shimon Peres in office with Netanyahu gaining ground on the Labor leader in the 1996 election. Additionally, Hamas and its allies were battering Israel with a series of suicide bombings.

Netanyahu wanted out of the Oslo peace process, which at that point was Clinton’s signature foreign policy achievement. Clinton organized a terrorism conference on the Red Sea that March, less than three months before Israel’s election, to show that Peres could command the attention of regional Arabs. Notably, the Trump administration tried something similar: Last month it organized a conference of Middle East leaders, including Netanyahu, in Poland that was supposed to be about confronting Iran until it morphed into a murkier meeting about reinforcing “regional alliances.”

Never mind, Pompeo assured Israelis on Wednesday, it was a coup for their prime minister.

“This meeting is part of our effort to continue to build out the regional alliances,” Pompeo told reporters in Jerusalem, standing next to Netanyahu. “Last month, representatives of more than 60 countries met in Warsaw and had a historic conference which the prime minister attended.”

The ginned-up conference didn’t work for Clinton, by the way, as Netanyahu narrowly won the ’96 election.

So it’s happened at least once. Is it untoward?

It is heavy-handed, said Dan Arbell, a former deputy chief of mission at the Israeli embassy in Washington.

“By providing Netanyahu with these photo ops, the Trump administration shows it is favoring Netanyahu,” Arbell, a scholar in residence at American University’s department of history, said in an interview.

President Barack Obama declined to meet with Netanyahu in March 2015 when Netanyahu was here on the eve of Israeli elections.

“We have a practice of not meeting with leaders right before their elections,” Obama said at the time. (It should be noted that Obama was no great fan of Netanyahu to begin with.)

Asked by the Jewish Telegraphic Agency in a conference call Monday whether his Jerusalem visit looked like he was favoring Netanyahu, Pompeo suggested that the optics were not a primary concern for him.

“I’m not worried about what someone may say,” Pompeo said. “I’m going there to meet with the leadership of Israel on a set of incredibly important issues that are time sensitive. The threats in the region are real. Radical Islamic terrorism, the threat from the Islamic Republic of Iran are something that we work closely with our Israeli partners, that’s the focus of my visit, it’s what we’ll talk about, it’s the work that I will do while I’m on the ground there.”

To mitigate the impression of favoritism, the White House could have a meeting with Gantz, who like Netanyahu will be in Washington next week to address the annual conference of the American Israel Public Affairs Committee. So far, there is no sign that is happening. Pompeo told JTA that he did not know if he would meet with Gantz.

Why is Trump doing this?

Loyalty: Netanyahu, unlike leaders of other allies, has been unfailingly supportive of Trump, saying that Israel has never had a better friend in the White House. Have there been differences? Yes, most consequentially over Trump’s on-again, off-again policy of retreat in Syria. But Netanyahu has taken pains not to air those differences in public. There is very little Trump values more than loyalty.

Shared vision: Netanyahu has made his pro-Republican leanings obvious in recent years, and he and Trump are aligned on a number of issues: They share a similar hostility to radical Islam, speak often of confronting aggressors in the Middle East and have seen Saudi Arabia as a partner in advancing both governments’ interests. Netanyahu has also used Trumpian rhetoric about “witch hunts” and a rigged media to fend off charges of corruption; Trump may see a fellow victim of what even Netanyahu calls “fake news.”

The deal of the century: Another signal of Trump administration favoritism is the decision not to release the peace plan that Trump’s son-in-law, Jared Kushner, is drafting. The Kushner team does not want to embarrass Netanyahu with possible concessions as he battles the right and the left in the election.

Kushner and his team — Jason Greenblatt, the chief negotiator, and David Friedman, the ambassador to Israel — have forged ties with Israel’s government and may have tailored the agreement to hew to outlines that would be acceptable to the Likud, the party Netanyahu leads. A change in Israel’s government — particularly one that, unlike Trump and Netanyahu, could be committed to a two-state solution — could send them back to the drawing board. Kushner also has been close to Netanyahu for decades (Netanyahu slept in Kushner’s bedroom when he was a guest in New Jersey of Kushner’s father, Charles). And Friedman has a long association with Israel’s settler right.

Cover: Trump has gone on the warpath for the pro-Israel vote, calling Democrats the “anti-Jewish” party after its well-publicized internecine battle over a freshman congresswoman who has made statements that appear to invoke anti-Semitic slanders.

Jewish voters emphatically do not favor Trump. Despite pulling out of the Iran nuclear deal Netanyahu hates and moving the U.S. Embassy to Jerusalem, Trump registers as the least-liked president among Jewish voters since George H. W. Bush. Most salient, the majority of Jewish voters note his expressions of bias against Muslims and immigrants, and his equivocating when asked to denounce the far right. Polling shows that more than 70 percent of Jewish voters blamed Trump’s rhetoric in part for fueling the massacre of 11 Jewish worshippers at a Pittsburgh synagogue in October.

Netanyahu and his ambassador to Washington, Ron Dermer, have emphatically and repeatedly insisted that Trump is not an anti-Semite, nor does he facilitate anti-Semitism. More of that next week, in front of cameras, is something Trump would welcome.

Could Trump be any friendlier to Bibi?

Maybe. Israel’s Channel 2 reported Wednesday that Jonathan Pollard, the Israeli spy whose parole conditions have kept him in New York, has twice visited the Israeli consulate in recent days. Bringing Pollard home would be a major coup for Netanyahu; is a pardon in the offing?