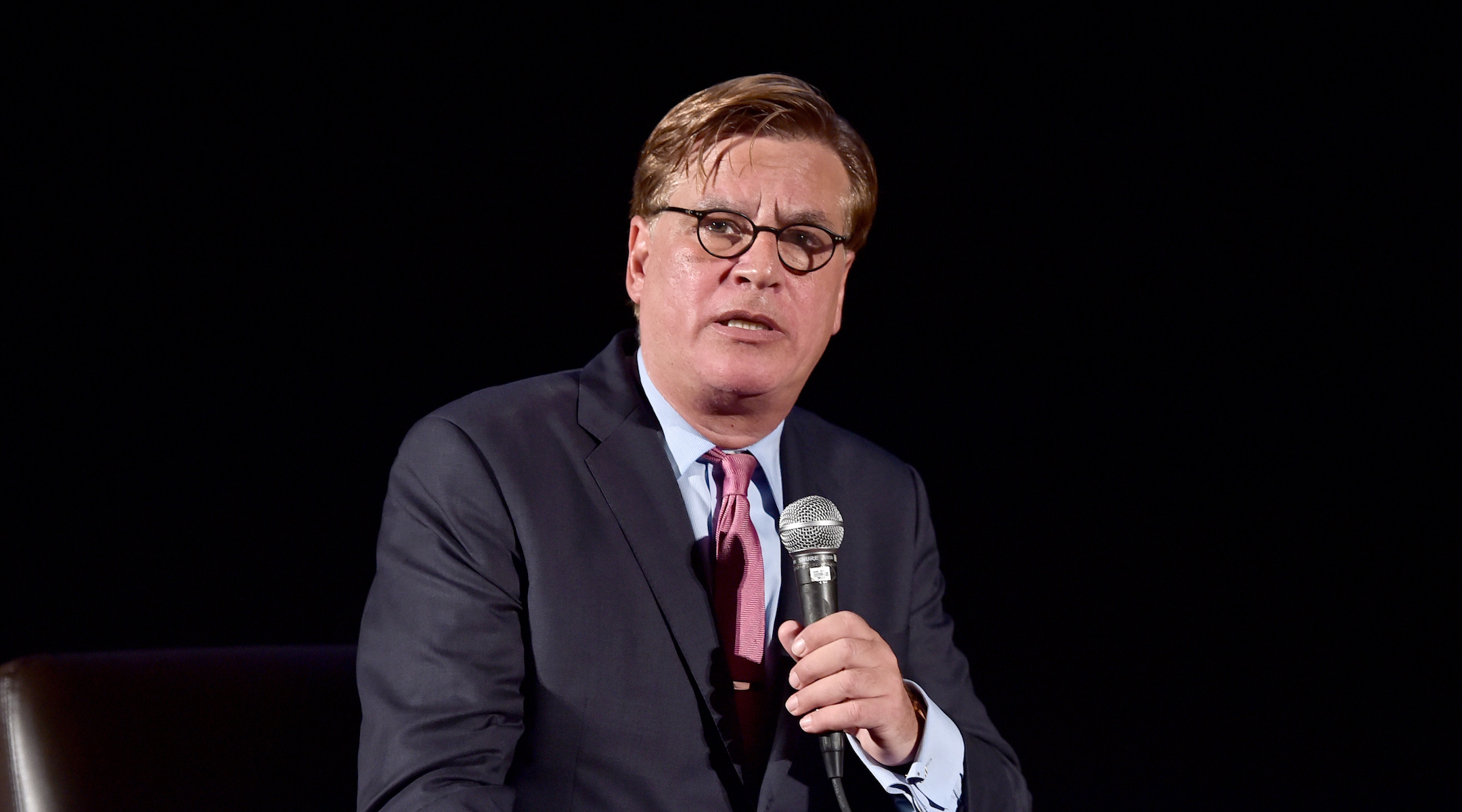 (JTA) — Aaron Sorkin gets that the question is a joke and, no, he responds, he didn’t tackle a stage version of “To Kill A Mockingbird” because “Gone With the Wind” wasn’t available.

And with good reason.

Sorkin, an award-winning screenwriter, and Rudin, an award-winning producer (he’s the first producer with an EGOT — an Emmy, Grammy, Oscar and Tony) have been successful in several collaborations — the films “The Social Network” and “Steve Jobs,” and the TV series “Newsroom.”

Rudin was excited because “after years of trying, he’d acquired stage rights to “To Kill a Mockingbird,” and he wanted Sorkin to write it.

“I said yes right away. I didn’t hesitate, even though I thought at the time it was a suicide mission,” the writer recalled. “What could I do but make it less?”

Sorkin’s fears were understandable. During PBS’s recent search for “The Great American Read,” Harper Lee’s classic about racism and justice in the Deep South topped the list ahead of the Harry Potter books, which finished third; “The Lord of the Rings” (5); and yes, “Gone With the Wind” (6).

The 1962 movie version starring Gregory Peck is nearly as iconic as the book, which still sells more than a million copies a year.

But Sorkin needn’t have worried: Since opening on Dec. 13, the show has been the highest performing non-musical play on Broadway. The result, which stars Jeff Daniels, is one of the great dramas of the season, one greeted with rapturous reviews. It’s a sure bet to be nominated for Tony Awards, including for best play.

Daniels plays Atticus Finch, the white lawyer assigned to defend a black man accused of raping a white teen in rural 1930s Alabama. From start to finish, Atticus is a paragon.

“He sees the goodness in everyone,” Sorkin says, even the racists.

“All you have to do is crawl around in someone else’s skin and see things from their point of view. From the beginning of the play, he believes these are his friends and neighbors. They may be stuck in their old ways, but none are so far gone that they would send an obviously innocent man to the electric chair. Over the the course of the play, he discovers that they are too far gone and even he can’t find their goodness.”

Sorkin believed that at least parts of the play felt dated, including what he called “one of my favorite scenes, but probably not the favorite of anyone who isn’t white.” It comes at the end of the trial, when the courtroom has emptied except for the segregated balcony — where the town’s black people stand silently as a sign of their respect for Atticus.

“It always puts a lump in my throat, and I was thinking about why and I became comfortable with the answer,” he said. “It’s because these people upstairs are not burning the courthouse down. There is no ‘no justice no peace’ rally. They are standing in quiet gratitude to this white man, and that seemed to me to be this white liberal fantasy that marginalized people will point to us and say you are one of the good ones. Thank you. So I did the opposite.”

No spoiler will be revealed here, except to say the change is subtle and involves giving black characters — the accused Tom Robinson and the Finch family’s maid Calpurnia — additional dialogue. It was these changes in part that prompted the author’s estate to sue to stop the production, alleging it deviated too much from Lee’s novel.

“And by estate,” Sorkin said, “we’re talking about one person, one woman who is in charge. … We were able to settle all that.”

Harper Lee died in 2016 after authorizing a new adaptation but before reading Sorkin’s draft. 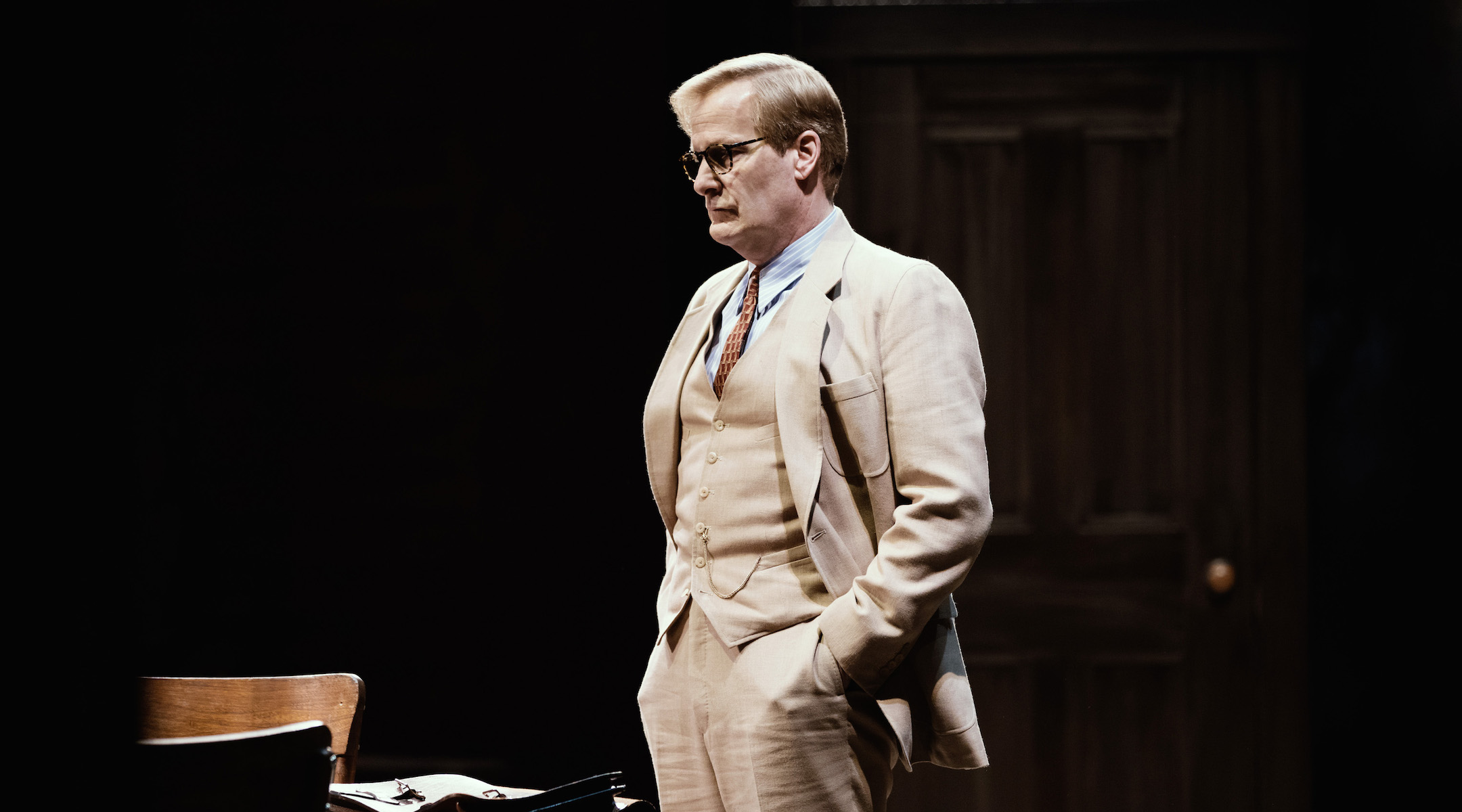 Jeff Daniels stars in Sorkin’s adaptation of “To Kill A Mockingbird.” (Julieta Cervantes)

If there is such a thing, “Mockingbird” is in some ways a typical Sorkin script in that it is anchored by a person with a strong moral center. You saw it in “West Wing” (Martin Sheen’s Jeb Bartlet) and “Newsroom” (Daniels’ Will McAvoy). You even saw it in the drug-addicted title character of his last film, “Molly Bloom” (Jessica Chastain).

Another similarity to Sorkin’s past work is the sparkling dialogue. When I suggest that Daniels gave one of the greatest monologues of all time in “Newsroom,” Sorkin deflects the compliment.

“The secret there was Jeff Daniels. He really clobbered that speech, as he does with his speeches in ‘Mockingbird,'” he said.

“I’m not sure there’s a secret to it. My parents took me to see plays at a very young age, often to see a play I was too young to understand, like ‘Who’s Afraid of Virginia Woolf?’ The sound of the dialogue, it sounded like music for me. That was sort of my entrance to writing.”

Sorkin set out to be an actor, participating in the school plays and studying theater in college. But one weekend he was left alone in an apartment with a friend’s electric typewriter.

“I wasn’t going out. The television wasn’t working. So to entertain myself I started writing dialogue. I stayed up all night,” he recalled.

Another change Sorkin made in the play: He has the villain, Bob Ewell, insult Atticus with anti-Semitic slurs.

“I suppose it has something to do with my cultural background,” Sorkin said, “but also Ewell was a Klansman and I wanted to express more of the Klan ideology.”

Sorkin did attend Hebrew school and was not a bar mitzvah. But growing up in Scarsdale, New York, “in the seventh grade I’d be going to someone’s bar or bat mitzvah every week. In my family the boys, we had a big party on our 13th birthday. But I loved [bar mitzvahs]. They appealed to my sense of theatricality. The singing and oratory and they were also inspirational. Six weeks before I was 13 I contacted a rabbi and told him I’d like you to teach me the Torah. He said he couldn’t do that in two weeks.”

So Sorkin made a counteroffer: Just teach me what I need to know.

“I have a good ear and I can learn it phonetically,” he said. The rabbi responded that wasn’t in the spirit of the occasion.

“I feel I missed something because friends of mine who did go to Hebrew school, who are observant and keep kosher and some who keep the Sabbath, they have something I want,” Sorkin said. “I can’t describe it. I wish I could describe it. I just know that I envy it.”

Sorkin is divorced from his wife, Julia Bingham, and they have a daughter, Roxy, who is being raised Jewish.

“She can say the Sabbath prayers on Friday night and is Jewish for the same reason I am,” he said. “We understand that we come from a long line of people who always got their asses kicked for being Jewish — and we stand with them.”