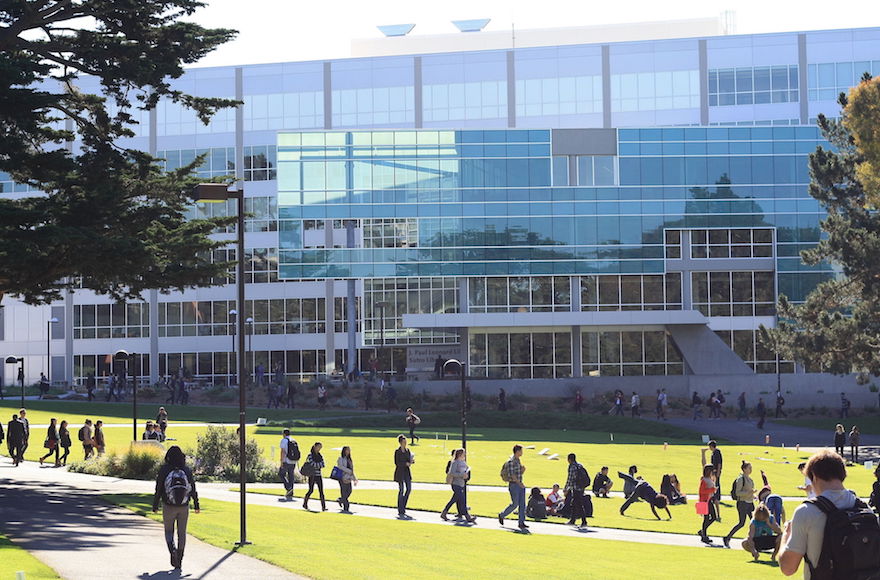 SAN FRANCISCO (J., the Jewish News Weekly of Northern California via JTA) — San Francisco State University and the California State University agreed to a list of demands from pro-Israel students and their lawyers in settling a discrimination lawsuit that claimed the students were victims of systemic anti-Semitism.

The settlement was announced Wednesday shortly before the case was set to go to trial.

The plaintiffs said that S.F. State had exposed Jewish students to anti-Semitism for 50 years, and focused on two recent incidents: a demonstration by pro-Palestinian groups in April 2016 that prevented then-Jerusalem Mayor Nir Barkat from speaking at a public event, and San Francisco Hillel’s exclusion from a February 2017 Know Your Rights fair on campus.

According to the Lawfare Project, which served as co-counsel to the plaintiffs, S.F. State agreed to several steps as part of the settlement, including issuing a public statement that it understands that “for many Jews, Zionism is an important part of their identity.”

The university will create a new position, coordinator of Jewish student life, as part of its Division of Equity & Community Inclusion, and allocate $200,000 to support “educational efforts to promote viewpoint diversity (including but not limited to pro-Israel and Zionist viewpoints).”

Moreover, the school will order independent investigations of all religious discrimination complaints, as well as conduct an external review of campus procedures related to enforcement of anti-discrimination policies and student code of conduct.

The settlement follows several years of litigation. The most recent suit, filed in California Superior Court in February 2018, focused on events surrounding the Know Your Rights fair. San Francisco Hillel was blocked from taking part in the event after initially being invited to participate. The lawsuit claimed this was an act of discrimination, and that the “decision to exclude Hillel from the event was made, and then sanctioned by high-ranking university officials.”

A university investigation later concurred that blocking Hillel was discriminatory. The suit cited “total lack of follow up from [SFSU President Les Wong] or other university officials” as evidence of systematic discrimination. The lawsuit also accused the CSU system and Chancellor Timothy White of inaction “while the campus climate for Jews in fact deteriorated.”

A separate but similar suit filed in U.S. District Court was formally dismissed in November. Judge William Orrick said at a hearing last summer that the suit failed to show “deliberate indifference” on the part of SFSU or significant injury to the students.

The university issued a statement on the settlement that read in part: “The settlement emphasizes the importance of improving student experiences and student lives. It allows SF State to reiterate its commitment to equity and inclusion for all – including those who are Jewish – and reaffirms the values of free expression and diversity of viewpoints that are so critical on a university campus.”

Ross Kramer of Winston & Strawn LLP, which represented the students along with Lawfare, said they are “incredibly happy with this result.”

“Our clients’ goal was to bring about meaningful, lasting change at San Francisco State University and throughout the California State University system, and to make sure that the rights of all Jewish students are safeguarded now and into the future,” he said. “That’s what this settlement achieves.”