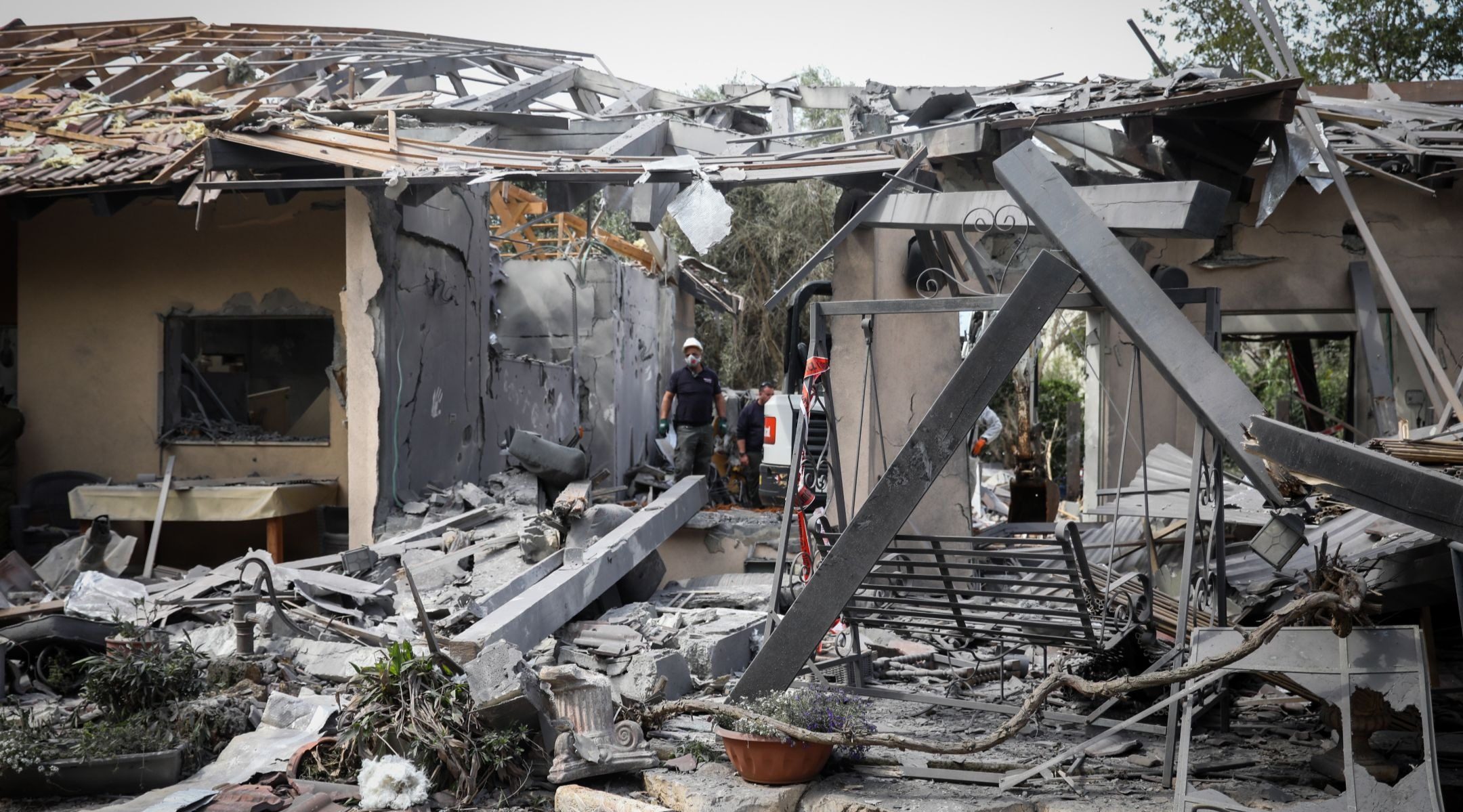 Israeli security forces inspect the scene of a house that was hit by a rocket fired from the Gaza Strip in Moshav Mishmeret in central Israel, on March 25, 2019. (Noam Revkin Fenton/Flash90)
Advertisement

JERUSALEM (JTA) — A long-range rocket fired from Gaza scored a direct hit on a home in central Israel, injuring seven, including two infants.

Following the early Monday morning attack, Israeli Prime Minister Benjamin Netanyahu, who also serves as defense minister, announced that he would cut short his visit to Washington, D.C., and return to Israel following his meeting with President Donald Trump scheduled for Monday morning. His early return means he will not address the AIPAC policy conference live on Tuesday as scheduled.

Netanyahu said in a statement shortly after the attack announcing his return that Israel “will respond forcefully.”

“Several minutes ago I concluded a telephone update and consultation with the Chief-of-Staff, the head of the Israel Security Agency and the head of the National Security Council,”  Netanyahu said in the statement. “There has been a criminal attack on the State of Israel and we will respond forcefully. In light of the security events I have decided to cut short my visit to the US. In a few hours I will meet with President Trump; I will return to Israel immediately afterwards in order to manage our actions from close at hand.”

Code Red rocket alert sirens sounded throughout the Sharon area of central Israel at about 5:20 a.m. Monday. The Iron Dome missile defense system was not activated by the rocket. The Israel Defense Force said it was investigating why the system failed to deploy, although IDF spokesman Brig. Gen. Ronen Manelis said that the system was not deployed in the area “based on an assessment of the situation.” Maj. Mika Lifshitz, a military spokeswoman, said the rocket had a range of 75 miles.

The home struck by the rocket is located in Moshav Mishmeret, a community of more than 1,000 located north of Tel Aviv near Netanya. In addition to collapsing in its center, the home caught fire. Shrapnel from the rocket damaged surrounding homes and pierced a gas tank, according to reports.

Family members inside the home had awakened from the alert siren, but did not have enough time to get the door of the home’s reinforced room closed. A 6-month-old infant will be kept in the hospital overnight, and a 12-year-old girl will have shrapnel removed from her leg in surgery. Several family dogs were killed in the attack.

The IDF said the rocket was fired from the area of Rafah in the southern Gaza Strip, more than 50 miles from where it landed. It is the farthest that a rocket from Gaza has been fired since the Gaza War in 2014, where rockets struck Haifa. It is also the area where more than a week ago two rockets were fired at Tel Aviv.

Following the attack, the IDF closed the Erez and Kerem Shalom crossings between Israel and Gaza. In addition, the IDF sent two brigades to southern Israel and was preparing to call up thousands of reservists.

No terror group in Gaza has claimed responsibility for the attack, although the Israeli media reported that only Hamas and Islamic Jihad have such long-range missiles. The IDF later confirmed Hamas as responsible. Hamas said the rocket was fired in error and that it does not want an escalation with Israel. The terror group said it is investigating why the rocket was launched.

The attack came hours after Hamas prisoners stabbed two guards at Ketziot Prison in southern Israel. At least 11 jailed Palestinians were injured in the aftermath of the stabbing, two critically. Following the incident, the Palestinian Islamic Jihad terror group issued a threat to Israel that the “consequences for its aggression that will be felt by soldiers and citizens.”

Netanyahu’s closest competitor in the April 9 election, Benny Gantz, also is in Washington and is scheduled to address the AIPAC conference on Monday. He called on Netanyahu in a tweet to return to Israel to deal with the crisis.

“The reality in which Hamas turned Israel into a hostage is unprecedented and unfathomable,” the tweet said in part. “Netanyahu has to pack up now and return to Israel to handle this serious escalation.”

In a second tweet, Gantz suggested that Netanyahu concentrate on the security of the country and not on his personal legal affairs.

“He who doesn’t respond to attacks, pays protection money to Hamas, dismisses attacks on residents of the south, and takes an attack on Tel Aviv lightly, now gets rockets in the center of the country,” he wrote.

We can confirm that #Hamas is responsible for firing a homemade rocket. It flew a distance of 75 miles across Israel and then destroyed this home: pic.twitter.com/nXytl8hcfl