As ‘Broad City’ bids farewell, is an era of peak Jewish TV ending? 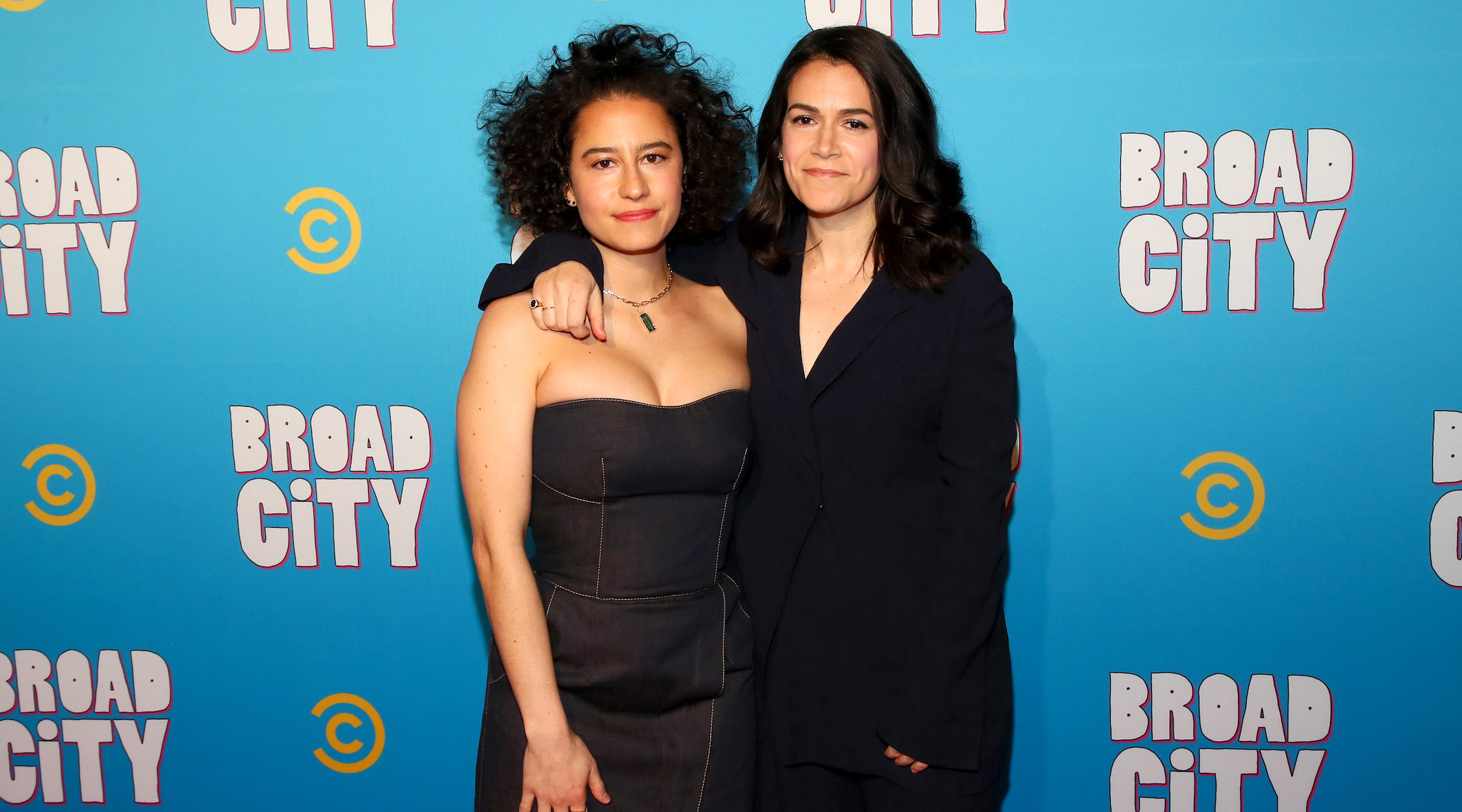 “Broad City,” the hit Comedy Central series created by and starring Ilana Glazer and Abbi Jacobson, will air its series finale on Thursday after five seasons.

The series was groundbreaking for many reasons: It showcased a very specific comedic sensibility — empowering, female, New Yorker, millennial, stoner-oriented — that hadn’t quite been seen before on mainstream television.

But another big part of the “Broad City” women’s identities was their Jewishness — something they continually mined for exceptional comedy. There was an entire episode dedicated to mocking Birthright Israel, and another to Abbi and Ilana befriending an elderly Holocaust survivor, played by 90-year-old “Sopranos” veteran Jerry Adler. (See our list of some of its other most Jewish moments here.)

Eight days after “Broad City” signs off for good, the CW will air the series finale of “Crazy Ex-Girlfriend,” on April 5.

That series, which stars and was co-created by Rachel Bloom, also has a unique sensibility that’s very female and very Jewish. But it’s very different compared to “Broad City”: It’s a California-based, fish-out-of-water show that’s informed by the traditions of both romantic comedy and American musical theater. It’s also extremely frank about mental health.

But among its over 100 original songs, “Crazy Ex-Girlfriend” had some iconic Jewish ones, including the “JAP Battle” rap (which included the lyric “So ‘sheket bevaka,’ shut the hell up,” and was reprised in an episode last week), the hora riff “Remember That We Suffered” and Tovah Feldshuh’s Jewish mother opus “Where’s the Bathroom.”

Those Jewy shows aren’t alone: “Transparent,” at its zenith often called the most Jewish show on television, also is readying its fifth and final season following a messy break last year with its star Jeffrey Tambor, who was accused of sexual misconduct on set.

Taken in combination, it’s becoming difficult not to feel like an era of unusually Jewish television — one practically unheard of in the history of the medium — is coming to an end. But that may not be the case. 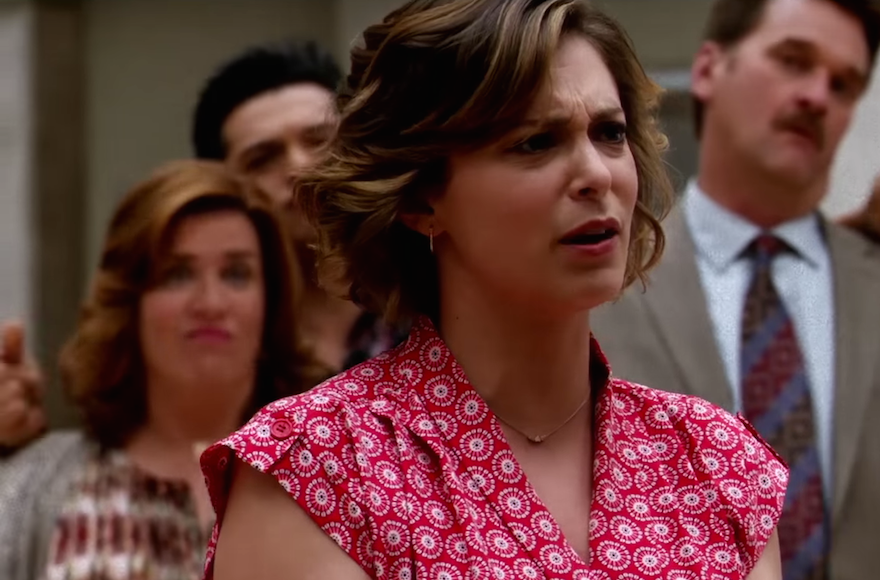 Rebecca Bunch (Rachel Bloom) faces off with her frenemy in a “JAP Rap Battle” on the CW’s musical comedy “Crazy Ex-Girlfriend.” (Screenshot from YouTube)

At an industry event in 2015, FX Network Chairman John Landgraf coined the phrase “Peak TV,” referring to the unprecedented proliferation of new scripted shows on channels and streaming services (the Jewish film critic Alan Sepinwall helped popularize it). The idea was that there is way more TV being produced than any one person could ever conceivably watch — and a historic amount of it is of high quality.

Peak TV clearly helped bring about the conditions for some of the great Jewish-oriented shows of the last decade. The resulting fragmentation of TV audiences — between networks and various streaming platforms — has been a huge part of that as well, and shows without huge ratings like “Crazy-Ex Girlfriend” have lasted much longer than they may have in a different era.

The logical consensus, after hitting the “peak,” was that the sheer number of shows and the quality was unsustainable, and would begin to decline at some point. However, Landgraf backtracked last year, saying that the industry whizzed past its peak and entered a “gilded age,” without any signs of slowing down. There were more shows in 2018 than in 2017, and streaming programming increased by a whopping 46 percent, according to Variety.

“[T]here’s too much story! There’s too much narrative,” Landgraf said. As time rolls on, it becomes harder to “surprise the audience with something novel,” he added.

Unsurprisingly, this trend could mean a continued boon for Jewish TV shows (regardless of what it means for viewers).

Take “The Marvelous Mrs. Maisel,” one of the top thriving series of the past few years. There’s a serious case to be made that the show, which involves a 1950s housewife-turned-stand-up comedian, is more Jewish-themed than “Broad City,” “Crazy Ex-Girlfriend” or “Transparent.”

Jeffrey Tambor, right, with Judith Light in the second season of “Transparent.” (Courtesy of Amazon Studios)

Then there’s the popular Netflix series “Russian Doll,” starring and co-created by the Jewish actress Natasha Lyonne, which is full of Jewish references (it takes place in a converted yeshiva, for example). The show seemed to tell a self-contained story, although the producers say they are open to further seasons.

“Curb Your Enthusiasm,” the enduring series by Jewish comedy god Larry David, will soon enter its 10th season (even if it’s past its prime). Acclaimed director Jordan Peele is creating a series about Jewish Nazi hunters for Amazon.

Sacha Baron Cohen’s “Who Is America” also featured a comic Israeli soldier, Col. Erran Morad — a man able to rope conservative political figures into embarrassing gaffes. That show was one and done, but Cohen is getting set to play 1960s spy Eli Cohen in the upcoming Netflix limited series “The Spy.”

Beyond that, there’s a seemingly endless barrage of Israeli shows that have captivated audiences upon their arrival on American streaming services. American remakes of Israeli shows have been popular for years (see “Homeland” and “In Treatment”), but now the original shows from Israel are making the jump. There’s “Fauda,” “Hostages” (“Bnei Aruba”) and “Shtisel” on Netflix, and “Kfulim” and “Prisoners of War” (the source material for “Homeland”) on Hulu.

At a time of intense disagreement in American discourse about Israel, it appears the one thing everyone can agree on is that they love Israeli TV shows.

So while “Broad City,” “Crazy Ex-Girlfriend” and “Transparent” were milestone shows, never afraid to be loudly and proudly Jewish, encapsulating the cultural American Jewish experience in new and entertaining ways, Jewish TV lovers shouldn’t fear. They simply paved the way for more. And in the new era of television, at least for now, there’s plenty of room for any and everything.

May the Jewish shows of the future aim for similar groundbreaking boldness.