Why Orthodox communities are at the center of a measles outbreak 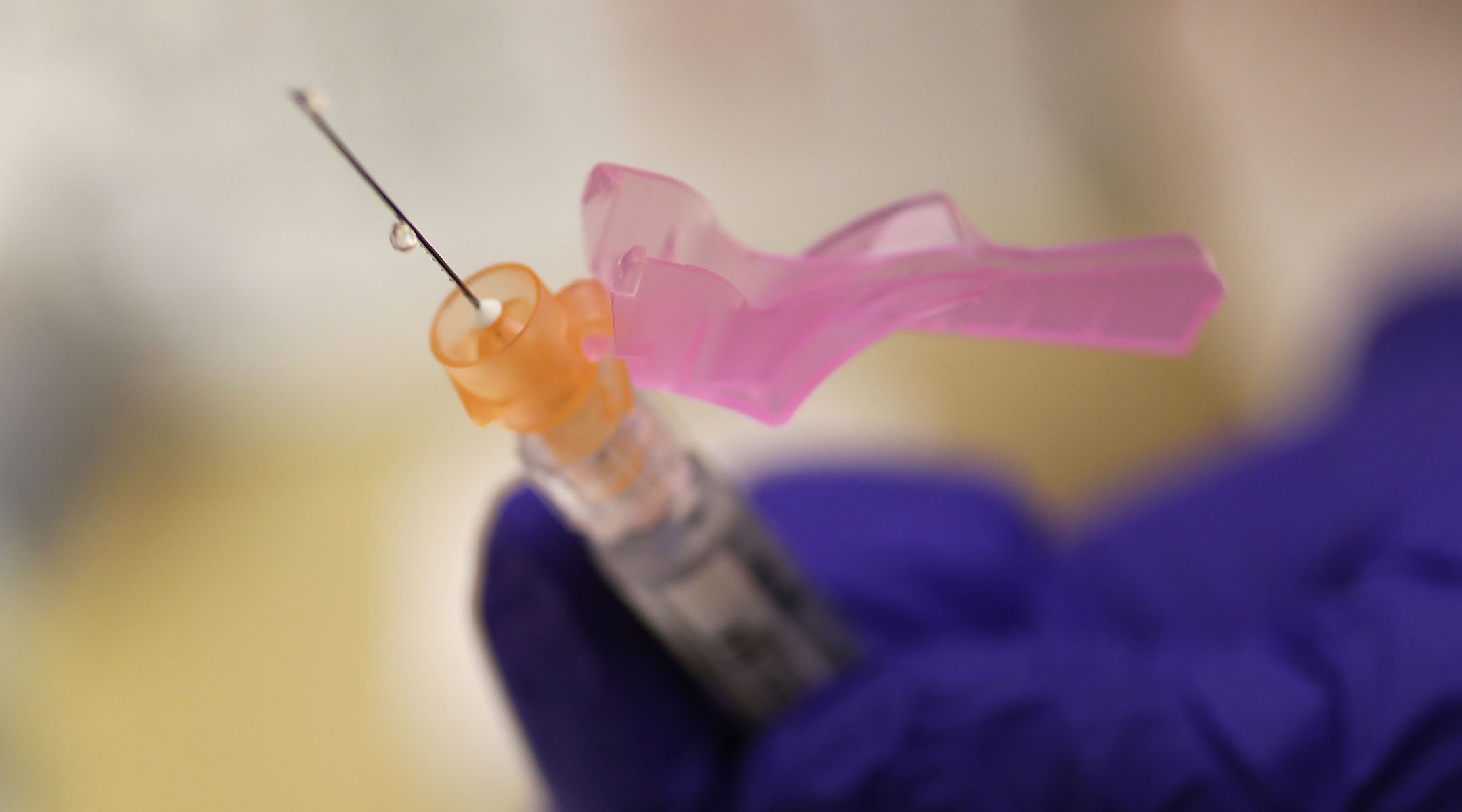 An influenza vaccination seen in 2018. Opposition to vaccinations has persisted in some Orthodox communities. (Joe Raedle/Getty Images)
Advertisement

An update regarding the Tenafly Chabad Academy’s vaccination policy appears below. The story has been updated as well to note that the Rockland County ban has been rescinded.

Nearly all of the 400 kids in the school he runs, from 3 months old to eighth-grade teens, are vaccinated. About eight or 10 are not. But he’s skeptical that immunization works at all.

“My doctor in shul says everyone should take a flu shot, so a lot of people went,” said Shain, the head of school at the Tenafly Chabad Academy in Northern New Jersey, about 13 miles from Manhattan. “Ninety percent that took a flu shot got flus and the 10 percent didn’t get the flu. … I speak to so many doctors and they’re saying just the opposite, that vaccines are good, but they put in the vaccine different methods that give you more danger than the vaccine is saving you from.”

Later he added, “In the vaccine there are things there that are putting you at higher risk.”

(According to the Centers for Disease Control, flu vaccinations reduce the risk of contracting the illness by 40 to 60 percent.)

Shain’s school, located in the Jewish population center of suburban Bergen County, is the only one among about a dozen Orthodox schools there that still accepts unvaccinated kids, according to L’via Weisinger, a school nurse who runs a group of nurses at Bergen Jewish schools.

The vaccine issue has become especially urgent as measles has spread in nearby haredi Orthodox communities with low vaccination rates. Rockland County in New York, which borders Bergen County, barred unvaccinated minors from public places, but a state judge rescinded the ban this week. The county has had 153 confirmed cases of measles since October.

Despite institutional pressure, a strain of opposition to vaccines has persisted in haredi communities claiming that vaccines are ineffective at best and harmful at worst. A pamphlet circulating among Orthodox communities, published by an Orthodox anti-vaccine group calling itself Parents Educating and Advocating for Children’s Health, falsely claims that doctors obscure evidence that vaccines are harmful, and links vaccines to brain swelling, paralysis and death. (In reality, lasting negative effects from vaccines are extremely rare.)

“[S]ome of what we are told about vaccines is simply untrue,” the pamphlet’s introduction reads. “From our research (and, for some of us, from personal experience) many more than ‘one in a million’ lives have been ruined by vaccines. We don’t want any more people to be hurt needlessly.”

An Orthodox woman pushes a stroller in Lakewood, N.J., in 2013. (Dennis Fraevich/Flickr)

Weisinger, a former board member of the Orthodox Jewish Nurses Association, said the anti-vax movement has taken hold among some haredi Jews due to lack of education and distrust of authority.

“There’s a lack of trust in the government that goes way back,” she said. “You have others who really care about their kids who are not educated. … They’re not out in the real world hearing real science. They’re not taught to discern between conspiracy theories and real science.”

(The New Jersey Department of Health has information about measles prevention and reporting here.)

In late February, Bergen County saw one case of measles, which is highly contagious and can stay in the air for hours after an infected person coughs.

“We say our community is pro-vaccine, but then we let an anti-vaxxer into our school and they have measles and our immuno-compromised kids get exposed and our pregnant women get exposed,” Weisinger said. “Those people are all susceptible to people from Rockland County coming into our community.”

Jewish institutions in the county have urged their members to vaccinate. A December statement signed by more than 40 Bergen County rabbis and Orthodox school officials said Jewish law commands vaccination.

“Vaccination is not only an obligation to protect the health of our children and ourselves, but a responsibility we have towards others,” the statement said. “Those who do not vaccinate can potentially spread life-threatening diseases to others who are vulnerable. We strongly urge all parents to vaccinate their children as recommended by the American Academy of Pediatrics.”

Shain’s school does not allow parents to exempt their kids from the measles vaccine for religious reasons. But it does accept notes from doctors exempting children from vaccines. Other schools will run doctors’ notes by a local health board for verification.

“I would always check with the board of health before I would accept a medical exemption because they’re not all legitimate,” Weisinger said. “Unfortunately there are some rogue doctors out there who are anti-vaccine and support the anti-vaccine community, and there’s a lot of pseudoscience out there.”

But Shain says he accepts doctors’ recommendations at face value.

“If they have a doctor and the doctor can give a letter that for this child it’s not good to do vaccines, then it’s under medical guidance, so the Torah says you follow the doctor,” Shain said. “The doctor doesn’t have to tell me the reason. The doctor can say I’m a licensed M.D., and according to my observation they shouldn’t take the vaccine.”

Multiple schools in the area used to accept religious exemptions to vaccines but no longer do. The Anshei Lubavitch Day Care Center in Fair Lawn, a Bergen County town, used to have one unvaccinated child out of more than 300, according to school Rabbi Levi Neubort. But that ended this year because Neubort feared the school could become a magnet for anti-vaxxers.

“I got a number of calls from parents that want to place their children in a school that still took a religious exemption,” he said. “God forbid we would end up with a concentration of non-vaccinated kids, something I would not allow.”

Children with legitimate medical exemptions also depend on “herd immunity” — that is, being in a population where others are vaccinated.

Schools in haredi areas in Brooklyn have taken measures to stem the measles outbreak. In December, the New York City Department of Health banned unvaccinated kids from Brooklyn yeshivas after haredi neighborhoods in the borough experienced 39 measles cases within two months.

Schools had also independently barred unvaccinated kids, leading in one case to legal action. After their child was kept out of Oholei Torah, a Brooklyn yeshiva, Sholom and Esther Laine sought an injunction last year that would force the school to accept their religious exemption to vaccines.

Reached by phone on Thursday, Sholom Laine would not comment because the legal battle is ongoing.

Joseph Aron, a Brooklyn attorney focusing on religious and constitutional issues, said that according to New York state law, the school was well within its rights.

“There’s no obligation for a school to accept a religious exemption,” he said. “The school has total autonomy. The school doesn’t have to bend backwards and accept me if I have a medical reason to not get vaccinated.”

In New Jersey, the state government is advancing a bill to remove the religious exemption. Shain says most parents are happy that the school no longer accepts religious exemptions. But he says he hears from parents on the other side as well.

“Most parents want that we don’t accept religious [exemptions] and we should be vaccinated,” he said. “Some parents are saying why do we have to vaccinate?”

UPDATE: The Tenafly Chabad Academy notified the Jewish Telegraphic Agency on Wednesday that it does not accept religious exemptions for the measles-mumps-rubella (MMR) vaccine, and that as of June 24, it will not accept religious exemptions for any vaccines. The school also said that it requires all students, staff and faculty to show proof of vaccination, and that the school nurse “works in conjunction with the State of NJ, Department of Health to receive an approval” for any medical exemption to vaccination.