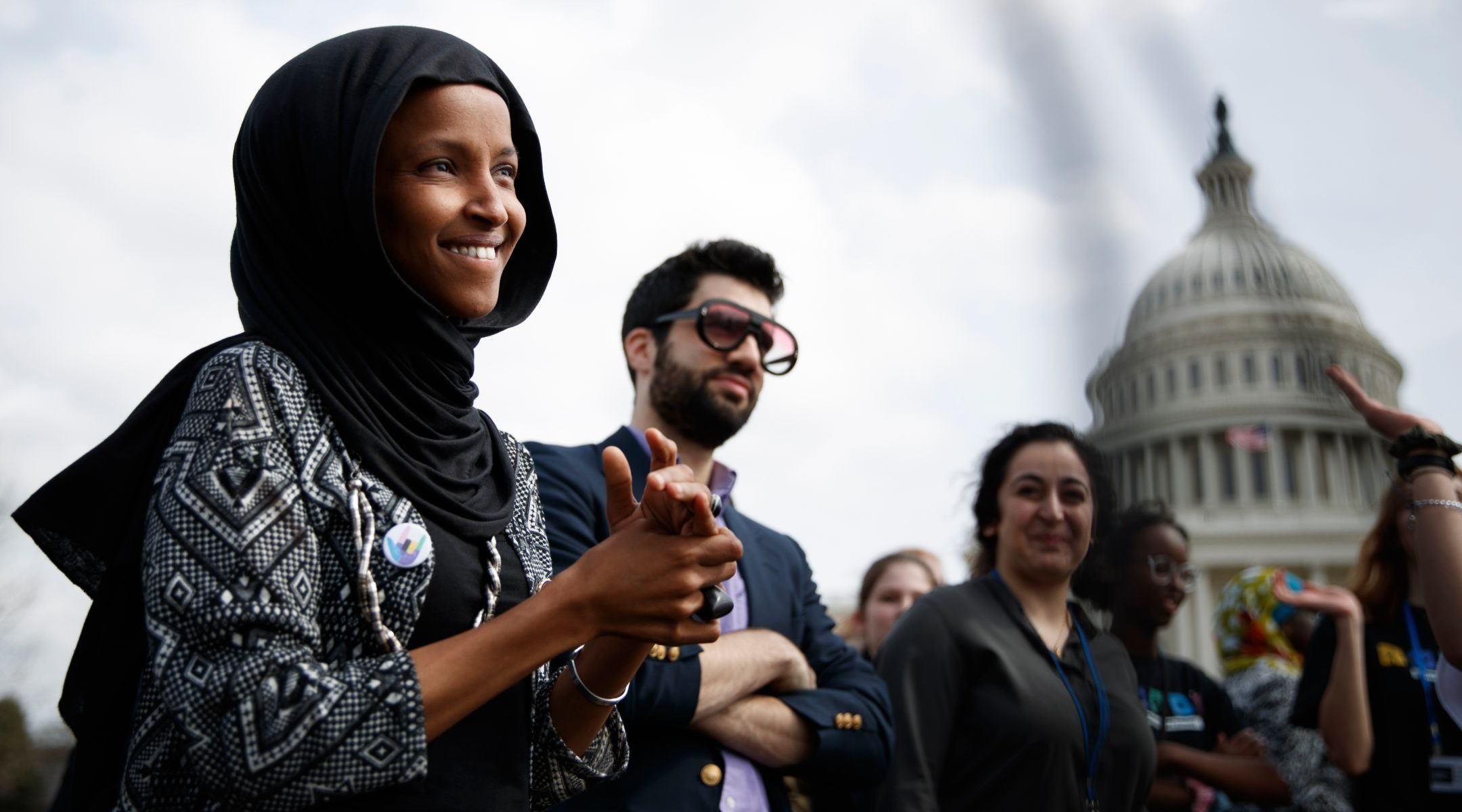 “I know there are a lot of people who in the last weeks have expressed support in trying to say this isn’t anti-Semitic or this shouldn’t be looked at in that way,” Omar said in the Feb. 19 call, which came after the freshman Minnesota Democrat had said that the American Israel Public Affairs Committee bought lawmakers’ loyalty with campaign contributions.

Those people, purportedly defending her, were not helping, Omar said.

“I do not want to give space or energy to anyone who wants to minimize the hurt,” she said.

The words — and the voice — were Omar’s, and she seemed sincere, said Susskind, a longtime leader of mainstream and progressive Jewish groups. But Susskind knew right away that the tone belonged to Omar’s communications director, Jeremy Slevin.

“That’s the nuance and the voice he brings in, getting past the zero-sum game of ‘I’m right and you’re wrong,’ and actually building community and getting people to work together,” Susskind said.

Slevin’s interlocutors and former colleagues describe a youthful, soft-spoken aide whose anti-poverty activism is rooted in his Jewish upbringing. He has been key in trying to stem the tide of rancor stirred by Omar’s statements, which are seen as playing into anti-Semitic stereotypes.

In addition to her AIPAC tweet, seen as affirming slanders about Jews and control, she has said that she feels pressure to pledge “allegiance” to Israel, which to many invoked the dual loyalty slander. In 2012, she accused Israel of “hypnotizing” the world. (She apologized for that tweet, but has not apologized for the “allegiance” claim.)

“No politician runs to get into trouble,” Keith Ellison, the former congressman who also employed Slevin as a communications director, told the Jewish Telegraphic Agency. “You run to do some good in the world. When that goes awry, you need someone to help you. That’s Jeremy.”

Ellison said Slevin’s strength was in getting to the essence of a politician, not trying to re-create her, and then shaping her message in a way that will get people to pay attention rather than react in anger.

“Some want to remake their candidate. His thing is ‘where are you at really? Let’s find that kernel of truth and shape it,'” said Ellison, the first Muslim elected to Congress when he won in 2006.

He retired last year from the Congress to make a run, ultimately successful, for the Minnesota attorney general’s post. Omar is his successor in the state’s Minneapolis area 5th District.

Ellison as a congressman worked well with his Jewish constituents. The relationship between Omar and her Jewish constituents is more tense, and Slevin, as a Washington hire, does not deal with that sphere. Omar, a Somali refugee, is one of the first two Muslim women elected to Congress.

Slevin, who declined a request for an interview, earned instant social media infamy last week, however, not by tamping down Omar’s confrontational demeanor but by seeming to embrace it.

Slevin repeated the phrase “Anti-semitism is a right-wing force” until his 280 characters ran out. Jewish Twitter wasn’t having it, and hundreds responded that he had his facts wrong.

“If you’d ever like to hear about my experiences with Anti-semitism on the left **in this country**, Jeremy, I’d be happy to talk,” said Laura Moser, who ran as a progressive last year in a Houston-area primary. (She was defeated.) “In the meantime, you should rethink this terrible, terrible tweet.”

What happened next comported more with the Slevin described by Susskind, Ellison and others close to him: He accepted the criticism from Jewish organizational leaders and progressive Jews who said that anti-Semitism on the left was indeed a problem, and reached out privately to some of them.

Ninety minutes after posting her response, Moser posted: “Wow — am really impressed that @jeremyslevin actually *did* reach out to me. We had a great conversation about the trans-partisan nature of anti-Semitism and the danger of assuming that people with otherwise good progressive politics are exempt.”

“I should have said ‘Violent anti-Semitism in the U.S. is primarily a right-wing force,'” he told Adam Serwer, a Jewish writer for The Atlantic.

Partisan blame for anti-Semitism, however, wasn’t just a Twitter distraction. It has become a central argument in Jewish and pro-Israel politics.

Last week numerous speakers at the AIPAC conference denounced anti-Semitism, mentioning Omar’s tweets as well as the Pittsburgh synagogue massacre in October. But only Democratic lawmakers, like Sen. Chuck Schumer, D-N.Y., noted that the alleged killer of 11 Jewish worshippers embraced an ideology particular to the far right.

That prompted a Twitter thread by Omar in which she chided the Israel lobby and its speakers for ignoring anti-Semitism on the right, followed by Slevin’s tweet.

Slevin’s tweet drew fire from conservatives, who said it reflected a blinkered refusal by the left to deal with bias among its cohort.

“This guy works for @IlhanMN,” David Bernstein, a law professor at George Mason University in Virginia, said on Twitter. “Note the implication of this (false, antisemitism spans the political spectrum) statement: @IlhanMN is not right-wing, so she can’t be antisemitic. This is the sort of crap American Jews are going to deal with as the Dems lurch toward” the left-wing anti-Semitism now afflicting Britain’s Labour Party.

Slevin has plumbed his Jewish past in helping Omar understand how the phrases she used in criticizing Israel are hurtful. His voice, friends say, is evident in a Washington Post op-ed published last month in which Omar emphasized her support for a two-state solution, noting that Israel and the West Bank are the “historical homeland” of both Jews and Palestinians.

(The reaction to her op-ed was unsurprisingly divided: Many on the pro-Israel left were relieved that she put down a stake in defense of the two-state solution. The pro-Israel right continues to focus on her tweets and support for the movement to boycott Israel.)

“She obviously cares about Israel and Palestine,” Susskind said of Omar, “but that’s not why she got elected, and she cares really deeply about poverty issues, racial justice issues, her life experience and gender equity — I can’t imagine she and Jeremy want to spend all their time talking about Israel or Islamophobia.”

Slevin, 31, is a Maryland native who graduated with a degree in political science from Washington University in St. Louis.

From 2013 to 2018, between working for Ellison and Omar, he was a journalist at MSNBC before working on poverty issues at the Center for American Progress, the liberal think tank. Rebecca Vallas, who directs the center’s anti-poverty program, called him “tireless.” She said he worked on defending Obamacare and against President Donald Trump’s tax cuts, and “helped to launch CAP’s Hands Off campaign, which brings together over 30 organizations across the progressive community to protect vital programs that help families afford the basics.”

“As a staffer for Rep. Omar, Jeremy has been very engaged and responsive from the jump and clearly brings a passion for social justice to his work,” Gingold said.

Ellison, who employed Slevin from 2011 to 2013, described his staffer as one who seemed preternaturally calm in a sometimes crazed environment.

“He brings a certain sense of calm, ‘let’s not panic,'” he said.

Ellison recalled how Slevin weathered the death of his mother.

“I remember how when he went through that tragedy, I thought, ‘this guy is operating with a higher purpose,'” the former lawmaker said. “And he hadn’t hit 30.”

Slevin and Ellison also share a passion for music; the congressman bought a guitar from his former staffer.

“In politics, we treat crises as if they’re never gonna happen, but they always do,” Ellison said. “When that happens you need somebody to help you think it through and focus on why you ran.”

Omar’s intent was not malign, Ellison said, but “she needs to work with Jeremy to work in a clearer way so people can understand that.”