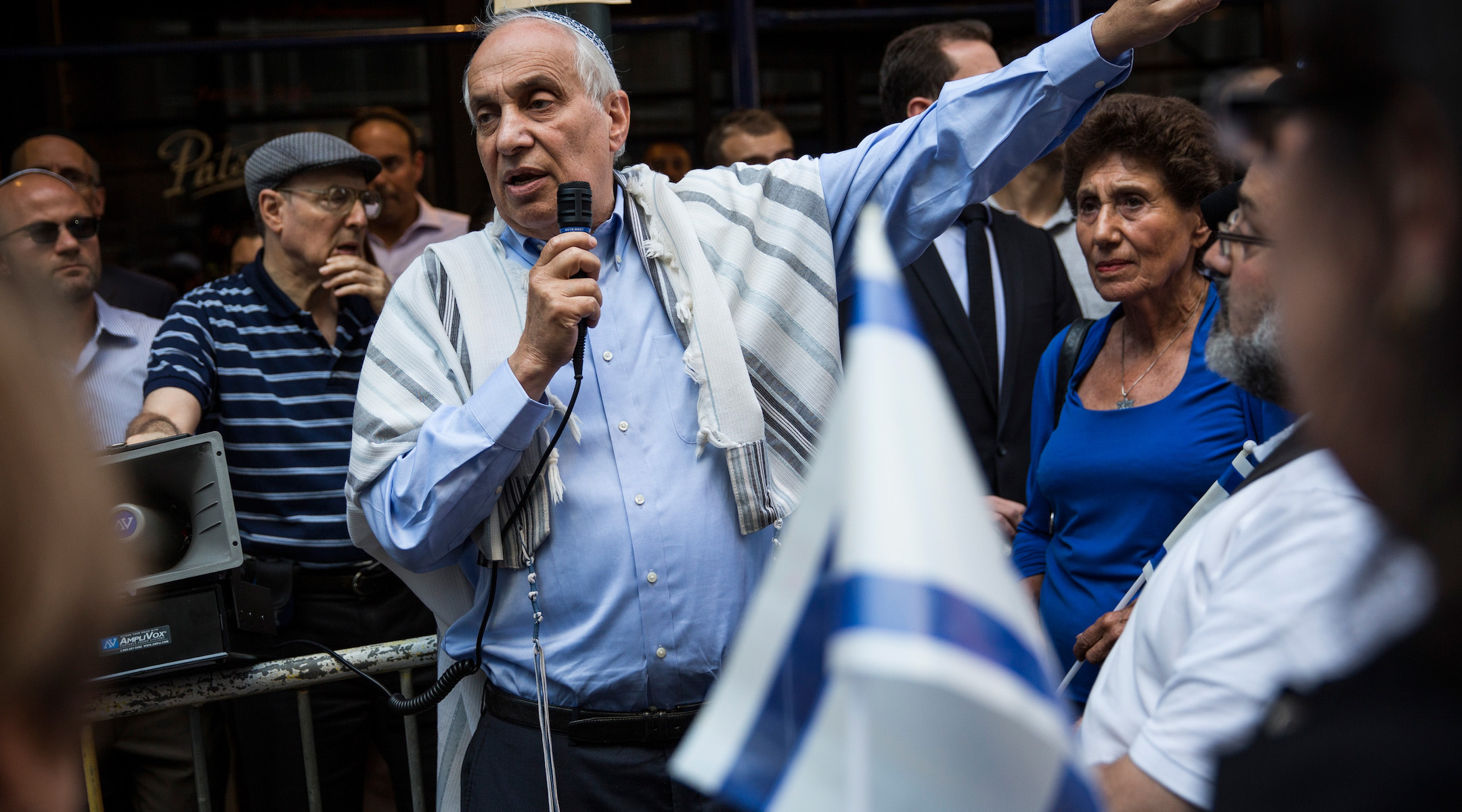 Rabbi Avi Weiss, center, the founder of Yeshivat Chovevei Torah, said the decision to deny ordination to a gay student pained him but he agreed with it. (Andrew Burton/Getty Images)
Advertisement

NEW YORK (JTA) – The leaders of a liberal Orthodox rabbinical school are standing behind their decision to deny ordination to a rabbinical student who is openly gay, even as Jewish LGBTQ leaders have criticized the move.

Daniel Atwood, a rabbinical student at Yeshivat Chovevei Torah in New York City since 2015, came out years ago, but only recently learned that he would not receive ordination, called semicha in Hebrew. Neither Atwood nor Rabbi Dov Linzer, the school’s president and rosh yeshiva, would comment on the specific reason ordination was denied.

But Linzer told the Jewish Telegraphic Agency that the decision came because of something, which he did not specify, that happened in the past several months.

Six months ago, Atwood and his partner got engaged on the stage of a concert in New York City.

“He came out to us in the end of his first year and we were fully prepared to give him semicha until certain circumstances arose over a few months ago,” Linzer told JTA. “Because this is such a sensitive issue, it took us a few months to come to the decision that I came to. I was trying to figure out if there was a possible way forward. I came to the conclusion there was not.”

Linzer said the process of denying Atwood ordination “was not handled well.”

Atwood, speaking to JTA on Thursday, declined to comment on the decision. But, he said, “I’m feeling hopeful that the community will move forward.”

The decision has sparked a backlash in part because, while Orthodox Judaism prohibits same-sex marriage, liberal Orthodox institutions have tried to welcome LGBTQ Jews. In 2010, the International Rabbinic Fellowship, which counts many YCT graduates among its members, put out a statement urging that LGBTQ Jews be treated with dignity and respect.

“Jews with homosexual orientations or same sex-attractions should be welcomed as full members of the synagogue and school community,” the statement said.

Since then, the movement’s leaders and synagogues have hosted events with LGBTQ groups and spoken out in favor of LGBTQ rights.

Rabbi Avi Weiss, the founder of YCT and perhaps the most prominent leader of the liberal Orthodox community, defended Linzer’s record on LGBTQ issues and told the Jewish Telegraphic Agency that he agreed with the decision.

“Rabbi Linzer has always been at the forefront of respecting and advocating for the gay community within Orthodoxy — to suggest otherwise is not fair and not true,” Weiss said in a statement to JTA. “I — like many others — am pained that Daniel will not be receiving semikha, but am in full agreement with Rabbi Linzer’s decision.”

Weiss has also written that a gay Jewish couple should be able to build a life together in the confines of an Orthodox community. In a chapter of his new book called “Welcoming LGBT+ Jews,” Weiss said that Jewish law does not allow gay couples a religiously consecrated wedding, but that it’s unreasonable to deny them a relationship.

“To demand that gay people not have a life partner is, for many, akin to a death sentence,” he wrote. “While halakha limits kiddushin and nissuin (betrothal and marriage) to the relationship between a man and a woman, we must do all we can to find a way for halakha to help guide gay couples to live in loving partnerships.”

In an email to YCT alumni on Friday, Linzer wrote that Orthodox rabbis are held to a higher standard than the rank and file. No Orthodox institution has sanctioned same-sex marriage or ordained openly gay rabbis.

“One of the big challenges for us as a rabbinical school is that there is a difference between communal inclusion, and between what it means to be ordained as an Orthodox rabbi,” he wrote. “So much more is expected and demanded from our rabbis than from our laity.”

But Atwood is not the only gay prospective rabbi that YCT has denied. Linzer acknowledged that one other applicant who is gay was accepted, then told to wait before enrolling until YCT clarifies its policy on the matter. Linzer said there was never a policy not to admit gay students. He said that YCT expects to release a clear policy by May 2020 after consulting with rabbis, lay leaders and leaders from the LGBTQ community.

“That student was told we were working out our policy, and to come back after we had a chance to clarify it,” Linzer said. “Until now, this has been such a complicated and difficult issue that we’ve been muddling through.”

Mordechai Levovitz, executive director of Jewish Queer Youth, a Jewish LGBTQ group, said the lack of a clear position on LGBTQ Jews in Jewish law keeps LGBTQ Orthodox Jews in a damaging state of limbo, though he wrote on Facebook that he believes Linzer had good intentions.

Jewish Queer Youth is helping Atwood receive ordination from another Orthodox authority via a fundraiser that has brought in more than $8,000 since Thursday. Its deputy executive director, Rachael Fried, said the group has received many calls, emails and text messages in the wake of the decision “from people who are feeling the hopelessness and feeling they have no future.”

“It’s really easy for people to say, from an intellectual perspective, this is hard and this is something we’re working on,” she said. “But at JQY, we see the actual ramifications. It’s extremely real.”