The kids are all right-wing: How Israel’s younger voters have grown more conservative over time 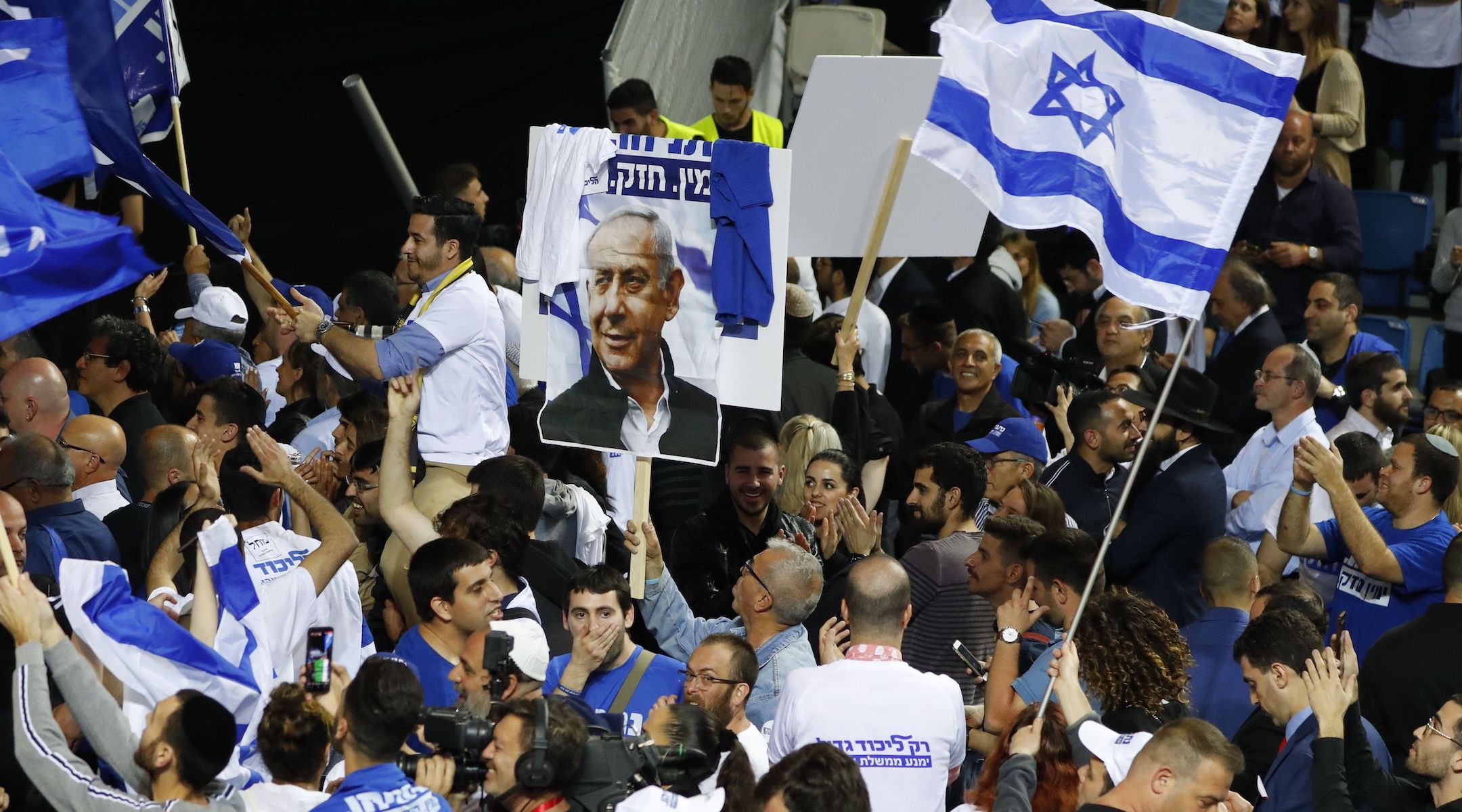 (JTA) – Like lots of millennials who have catapulted to fame, May Golan got her start on the internet, blogging about life in her South Tel Aviv neighborhood. From there she gained a platform as a social activist, with 25,000 followers on Facebook and 16,300 on Twitter.

On Tuesday, hours before she won a seat in Israel’s Knesset, she reached out to voters in one last Facebook video.

“The right wing government is in danger,” she warned viewers, wearing a T-shirt with the words “Netanyahu. Right-wing. Strong. Successful.” emblazoned in blue and white block letters.

“There could be a leftist government here,” she said. “We have so many hopes and dreams. We have hoped for a secure future, to return governance and sovereignty from the legal activism that’s strangling us, and those leftist nonprofits that end up making the most important decisions here.”

Golan, an incoming legislator for Prime Minister Benjamin Netanyahu’s Likud party, will be one of the youngest members of the Knesset at age 32. She has spent years protesting against African asylum seekers in her Tel Aviv neighborhood. In 2017, she said “A Palestinian state is a terror state.” She has appeared on Fox News’ “Hannity” and criticized Hillary Clinton.

In other words, Golan is staunchly right wing. She’s also a lot like many Israeli Jews of her generation.

While American millennials have a reputation for liberal politics, young Israeli Jews have gone the opposite direction over time. For at least the past 10 years, these voters have identified as right wing at much higher levels than their parents. 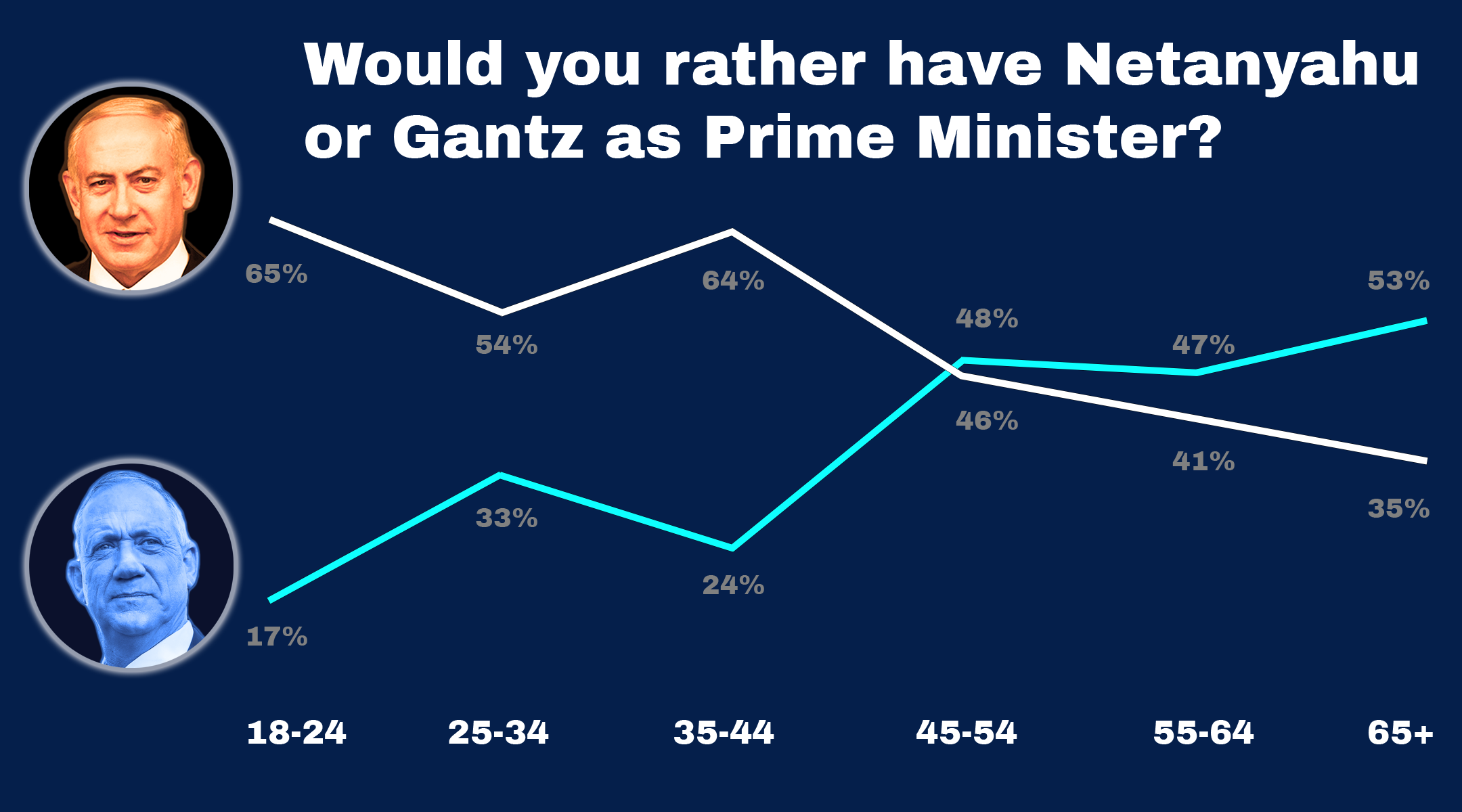 “There are young people who like Netanyahu’s ideology,” Eli Hazan, a Likud campaign spokesman, told the Jewish Telegraphic Agency. “They see the diplomatic achievements of Netanyahu and believe in him. Those are the facts and that’s the reality.”

In addition to Likud, Israel’s youngest Jewish voters — they are increasingly Orthodox due to high birth rates in the haredi Orthodox and religious communities — likely helped Israel’s two haredi parties pick up three additional Knesset seats (for a total of 16) in Tuesday’s election. Other right-wing parties likely benefited from the younger, more religious vote as well.

Younger voters in Israel have been disproportionately right-wing for a while.

“There are two main theories about age,” Tamar Hermann, co-editor of the the annual Israeli Democracy Index and a professor of political science, told JTA. “One theory says when you are politically socialized, between 18 to 34, then it stays with you throughout your entire life. The other theory says that your political views change with age in a specific direction; people become milder with age.

“I cannot tell you whether they are more to the right because young people tend to be more radical, and certainly the left right now doesn’t offer a radical left-wing worldview, or because they are just young and this will change.” 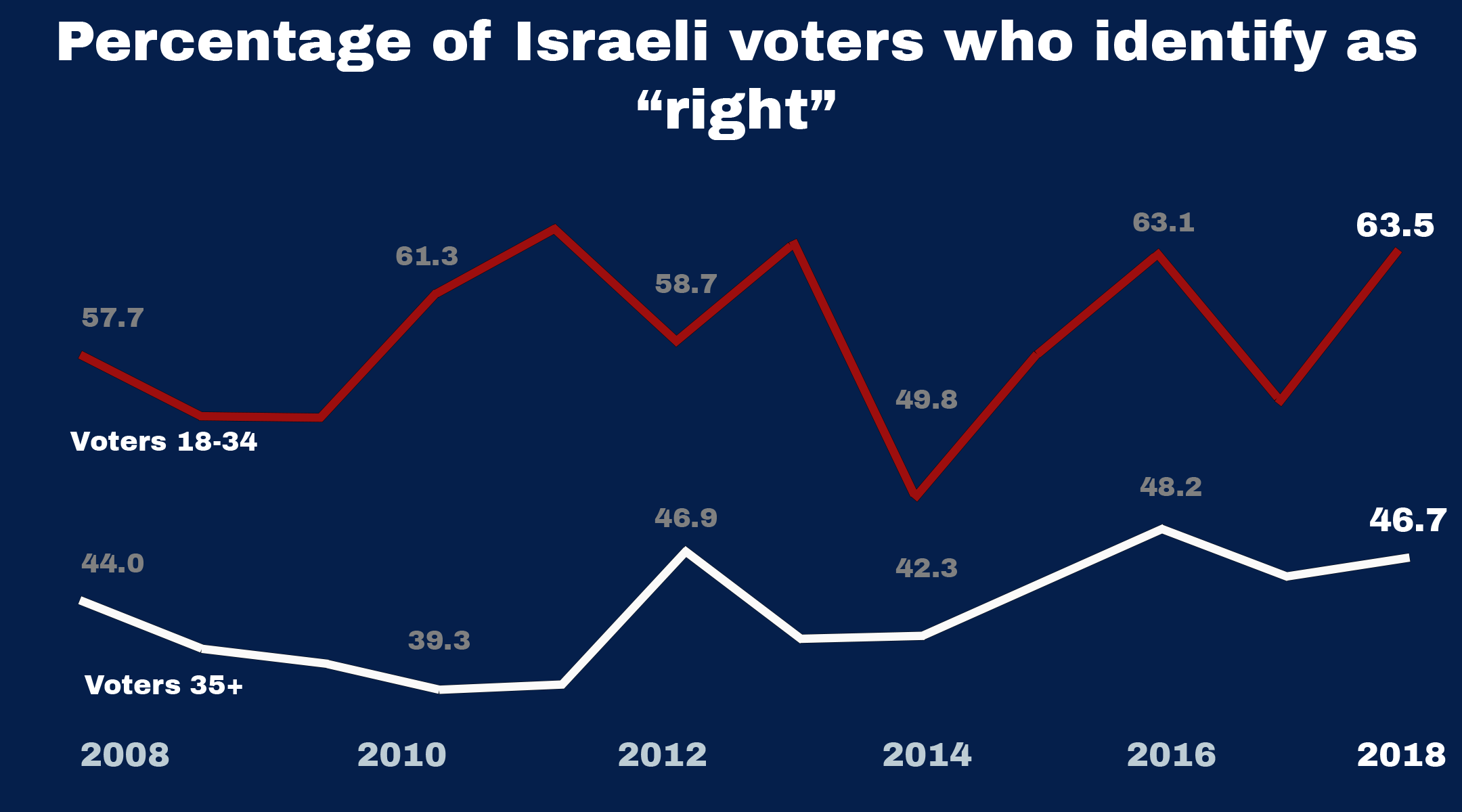 The percentage of Israeli 18- to 34-year-olds who self-identify as right wing is consistently higher than the percentage of the general electorate, according to the survey.  (Laura E. Adkins/JTA)

The trend might have to do with the events that shaped their formative years. An 18-year-old Israeli wasn’t alive during the heyday of the peace process in the 1990s, nor when the Israeli left last won an election, in 1999.

Young Israelis grew up during the second intifada, which saw hundreds of Israelis killed in suicide bombings. The aftermath of the 2005 disengagement from Gaza, which occurred when this group was between 4 to 20 years old, has led many young Jewish Israelis to resent any leader who is willing to cede any more land currently under Israeli control. Since some of this group has served in the army, successive wars in Gaza have only hardened that perception.

“They were born after the Oslo process started, they were exposed to the bloodshed during the second intifada, they are coming right after military service,” Hermann told JTA.

Hazan, the Likud spokesman, said that “people who grew up in the middle of the Al-Aqsa intifada don’t trust the Palestinians, don’t believe in peace. They really want there to be peace, but there is no partner.”

For younger religious Zionist voters in particular, the disengagement, which displaced some 8,000 Jewish settlers, “was considered an absolutely devastating moment that they’ve vowed never to return to,” Dahlia Scheindlin, an Israeli political analyst and a public opinion expert, told JTA.

“The general narrative is, we gave up this land, they sent rockets in return,” Scheindlin said. “The national religious have considered it a national trauma ever since then.”

Scheindlin said that what younger voters haven’t experienced might matter even more.

“There’s been no peace process, no handshakes, no agreements,” she said. “Any negotiations have been zero-expectation negotiations.”

But along with being children of the conflict, this cohort is shaped by their religiosity. A larger percentage of young Israelis is haredi Orthodox and religious Zionist than in previous generations, and religious Jewish Israelis tend to be more right wing.

“[How religious you are] is the best predictor of whether someone is left, right or center,” Scheindlin said. And the age divide is growing, she added, “given that religious people have more children and higher population growth.”

Right-wing parties have also attracted young voters because they prefer the same platform: social media. Netanyahu, who is famously averse to speaking with the Israeli press, is most comfortable tweeting and posting videos to Facebook. Those happen to also be networks popular with young Israelis.

“Bibi hates interviews and he very much prefers to have a completely controlled narrative, which is why he’s made enthusiastic use of social media,” Scheindlin said. “Every word is measured. Two of his closest advisers are his social media advisers. So much of his personality is on social media.”

So did Jewish millennials deliver Netanyahu this election? It’s a bit too soon to tell. But Scheindlin said that while exact figures aren’t out yet, it’s safe to assume that the right wing had youth on its side.

“I don’t think a Likud victory will be driven by young people because religiosity will scatter their votes” across a variety of right-wing parties, she said, “but they will definitely be helping a right-wing bloc.”