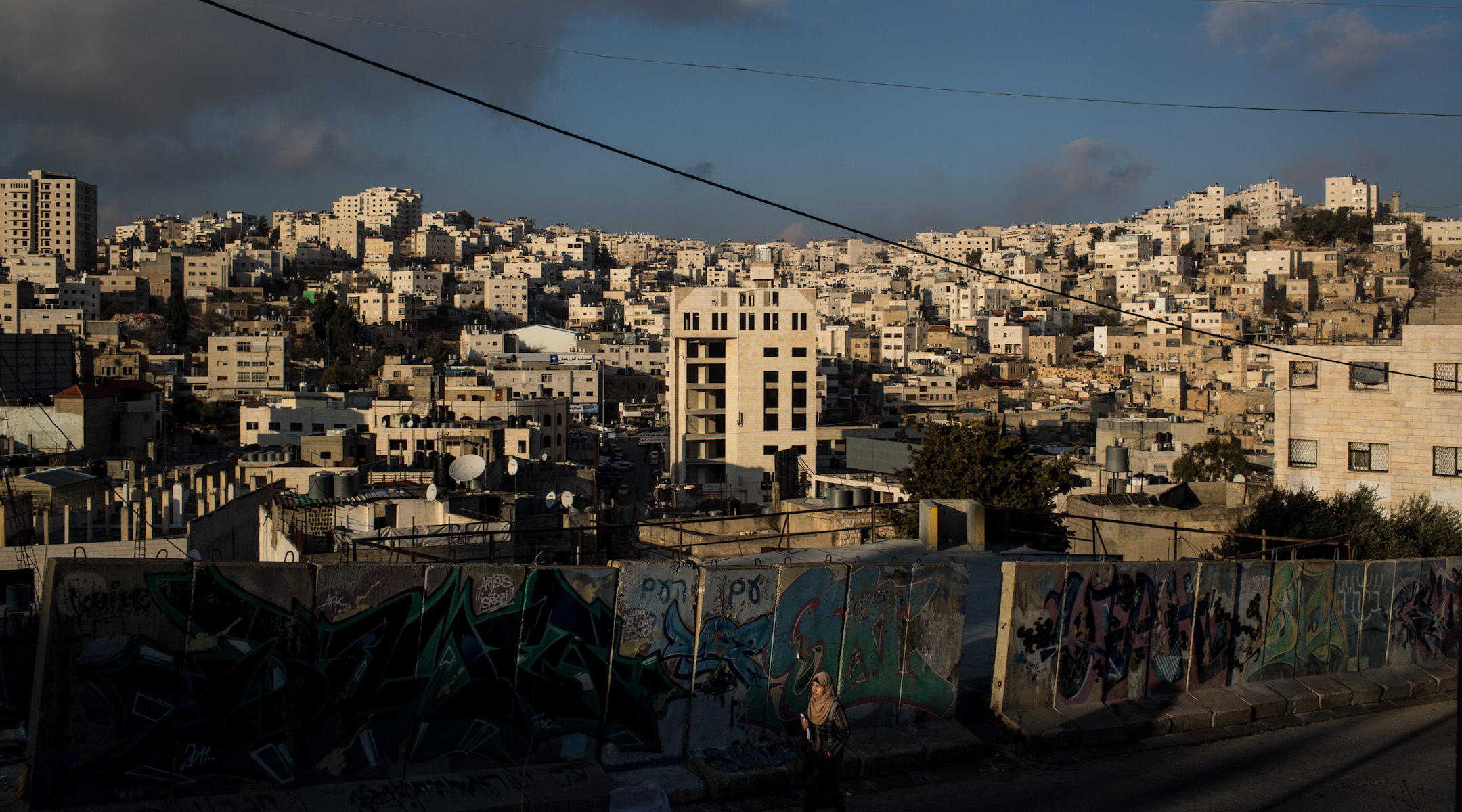 A Palestinian woman walks past a concrete barricade on the road that separates an Israeli settlement and a Palestinian neighborhood inside the city of Hebron in the West Bank, Jan. 18, 2017. (Chris McGrath/Getty Images)
Advertisement

(JTA) — A coalition of more than a dozen conservative groups, most of them Jewish, sent a letter to President Donald Trump tacitly asking him to respect a potential Israeli annexation of West Bank settlements.

Prime Minister Benjamin Netanyahu, who is almost certainly headed to a fifth term after winning last week’s election, promised voters he would move to annex at least part of the West Bank. Many right-wing politicians in Israel have been pushing annexation of some or all Israeli settlements for years.

The letter comes in response to a coalition of centrist and liberal groups who last week urged Trump not to recognize a potential Israeli West Bank annexation.

Sent Tuesday, the conservatives’ letter never explicitly advocates annexation or asks Trump to support it. But a press statement accompanying the letter said it aimed to urge “President Trump to permit Prime Minister Benjamin Netanyahu a free hand to extend Israeli sovereignty over Jewish communities in Judea and Samaria,” the biblical Jewish term for the West Bank.

“For decades, Israel has attempted to nurture coexistence with Arab communities which desire to live outside Israeli governance, while retaining control over its borders and national security in that very hostile part of the world,” the letter says. “It is unfair and unreasonable to hold these Jewish communities hostage to the continuing intransigence of the Palestinian Authority.”

The signatories include the Coalition for Jewish Values, a right-wing Orthodox rabbinical group; the National Council of Young Israel, an Orthodox synagogue association; and the Republican Jewish Coalition, along with a range of smaller Jewish groups.

A few non-Jewish groups also signed the letter, including Turning Point USA, a group for conservative college students, and Proclaiming Justice to the Nations, a pro-settlement evangelical group.

“We gratefully acknowledge your ongoing support for Israel’s self-determination and its right to defend and protect itself, and look forward to the continued strengthening of America’s special relationship with Israel in the days and years ahead,” it says.

A separate statement from Zionist Organization of America, also sent Tuesday, endorses annexation of the settlements as “a step that is overwhelmingly desired by Israel’s people, is essential to Israel’s security, and will bring stability to the area.”

The letter to Trump last week was signed by the top Reform and Conservative Jewish organizations as well as the Anti-Defamation League, Israel Policy Forum, National Council of Jewish Women and Ameinu, a liberal Zionist group.

“We respectfully request that you affirm long-standing bipartisan consensus that the two-state solution is the essential path to an Israel existing alongside a future state of Palestine in peace and security,” that letter said, “and that you declare that the United States will not support any Israeli proposals to annex the West Bank, in whole or in part.”