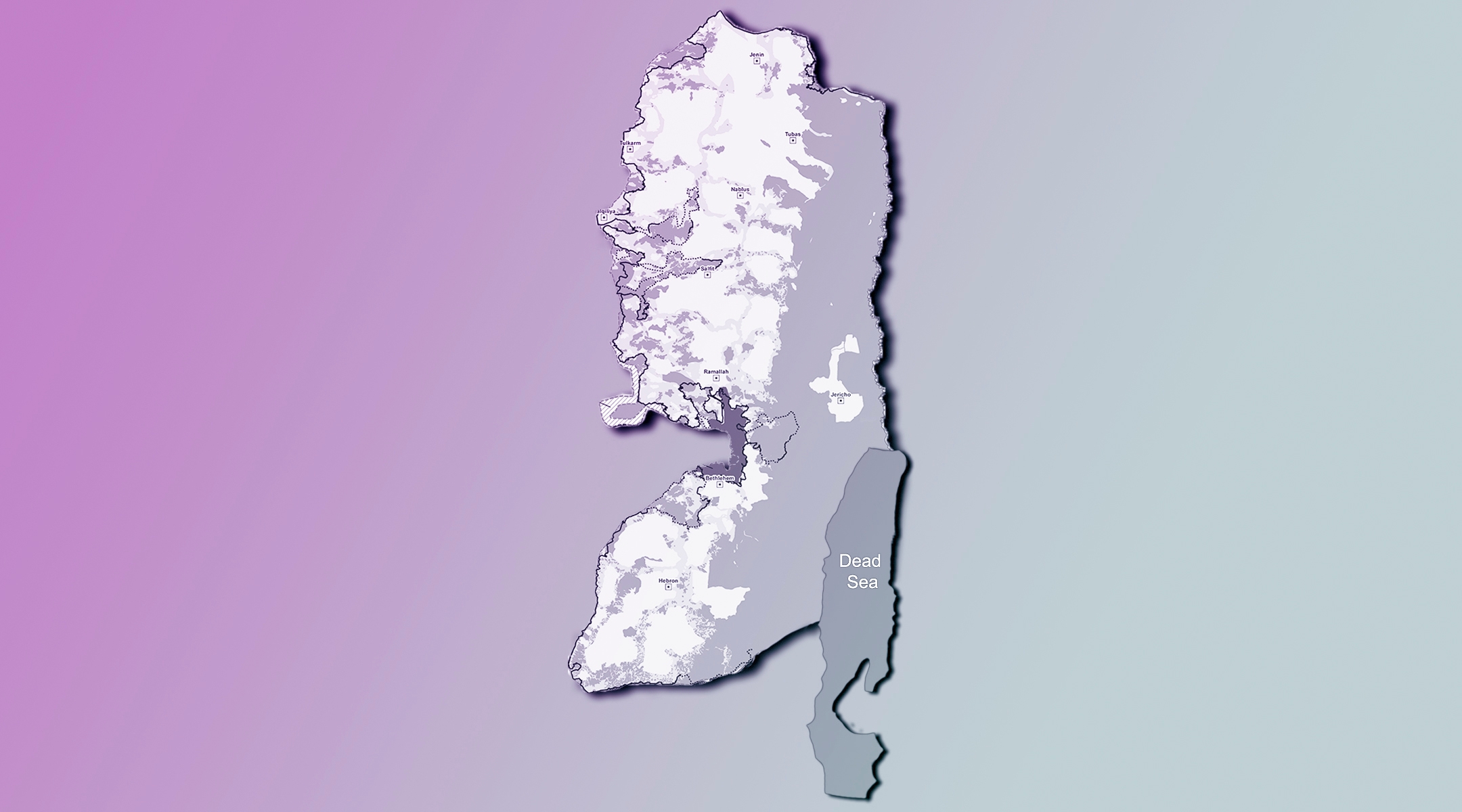 The West Bank is a maze-like tapestry of Israeli settlements and Palestinian towns and cities. (Wikimedia Commons)
Advertisement

“I’m going to extend sovereignty,” he said in an interview with Israeli Channel 12 on Saturday night, adding that “I don’t differentiate between the settlement blocs and isolated settlements.”

The campaign promise is a last-minute bid to draw right-wing votes in a tight election race. But what does annexing West Bank settlements mean? How would it affect Israeli-Palestinian peace talks, and the general geography of the Jewish state? Will it actually happen?

What is the West Bank?

The West Bank is a territory sandwiched between Israel and Jordan named for its location: the western bank of the Jordan River. About 2.5 million Palestinians and 400,000 Jewish Israelis live there.

Jordan conquered the West Bank after Israel’s 1948 War of Independence. Then Israel captured the territory from Jordan in the 1967 Six-Day War, but never fully annexed it into the country. So for more than 50 years, the West Bank has been controlled by Israel, but its status has been under debate. 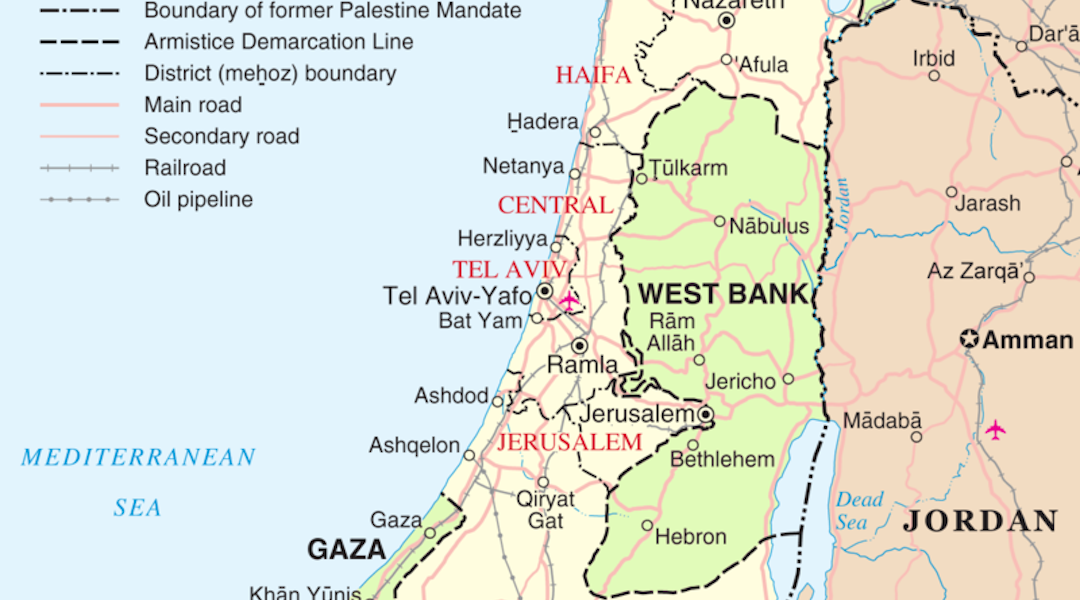 The debate is over who should control the area in the future. Palestinians, most of the international community and the Israeli left see it now as occupied Palestinian territory. They say Israel’s control is illegal and want the West Bank (or nearly all of it) to be the site of a Palestinian state. But Israel’s government says it rightfully controls the West Bank.

So is the West Bank part of Israel?

Not officially, no. The State of Israel has controlled the area, sometimes known in Israel by its biblical name, Judea and Samaria, for half a century without annexing it. That is what could change if Netanyahu wins and makes good on his promise.

Many Israelis believe it’s already part of the country. The Israeli right, and some Israel supporters abroad, see the West Bank as disputed territory that doesn’t belong to Palestinians. They say Israel controls it legally because it was won in a defensive war — the third in the country’s first 20 years of existence.

And religious Zionist Israelis (who are mostly on the right) often talk about the West Bank as the heartland of the biblical Land of Israel. Historically, and by Jewish tradition, this is where the Jewish patriarchs lived and where many of the events of the Bible took place.

Hold on. So it isn’t technically part of Israel, but Israelis live there?

Yes: Welcome to the settlements. After Israel conquered the West Bank, groups of Jews from left to right established villages there. Some of the settlements deep in the West Bank are fiercely ideological and religious communities. Many others are middle-class suburbs of Jerusalem and Tel Aviv, distinguishable from pre-1967 Israel only by their location and some added security measures.

Most of the big settlements (and most of the settlers) are close to the Green Line — the name for the internationally agreed-upon border between the West Bank and Israel. The total population of the settlements has grown to more than 400,000 today.

Where does that leave the Palestinians?

Here’s where it gets even more complicated. Palestinians do not have citizenship in Israel, the right to vote and freedom of movement. They are under varying degrees of Israeli control.

For about 25 years, the West Bank has been divided into three areas. Area A is fully under Palestinian control — run by Palestinian institutions, guarded by Palestinian security forces and subject to Palestinian laws. The Israeli army does conduct operations there, but its presence is relatively minimal.

Area B is mixed: subject to Palestinian civil laws, but under the control of the Israeli army. The vast majority of Palestinians live in Areas A and B.

Area C is everything else, and it’s fully controlled by the Israeli army. This is where all of the settlers, and a small number of Palestinians, live. It takes up about 60 percent of the West Bank’s total land area.

The three areas aren’t neatly sliced. They are interspersed with each other in a maze-like tapestry.

How would annexation change things?

Annexation would make some or all of the settlements officially part of Israel. This is a huge deal.

For 50 years, Israel has been holding the West Bank in a kind of temporary capacity and repeatedly has offered to cede nearly all of it in a peace agreement. This would make the annexed settlements as much a part of Israel — under Israeli law — as Tel Aviv. In Israel’s eyes, there would be no difference between the annexed settlements and the rest of the country.

The international community would likely protest annexation, and strongly, and Palestinians almost surely would. Commanders for Israel’s Security, a group of retired Israeli military officers that supports establishing a Palestinian state, predicts that annexation will lead to the collapse of the Palestinian Authority, which governs the Palestinian areas of the West Bank. The group says annexing all of the settlements will cost Israel $2.35 billion.

On the ground, little would likely change in the Palestinians’ daily lives — at least initially.

A man walks next to an Airbnb apartment located in the Esh Kodesh outpost near the Jewish settlement of Shilo in the occupied West Bank, Nov. 20, 2018. (Menahem Kahana/AFP/Getty Images)

Likewise, if Israel annexes only the settlements, and not the Palestinian areas, it would still leave the Palestinians in the same situation. They would be living in enclaves in the middle of an enlarged Israel, but without Israeli citizenship.

As for the settlers, they already live under Israeli law, and Israelis have little problem traveling to and from the settlements. If anything, it will make construction in the settlements easier to conduct.

Why is this coming up now?

Netanyahu is in a close race for re-election and wants to shore up his base. During the last campaign, in 2015, he did that by saying he would not establish a Palestinian state. The annexation pledge takes him one step further to the right.

It’s a play to draw voters away from smaller parties that are running even further to Netanyahu’s right, like the New Right Party headed by Naftali Bennett and Ayelet Shaked, two of Netanyahu’s longtime frenemies.

Netanyahu saw Trump’s Golan decision as a signal that annexation, in a broader sense, is kosher now.

“Everyone says you can’t hold an occupied territory, but this proves you can,” Netanyahu told reporters. “If occupied in a defensive war, then it’s ours.”

What would this mean for Israeli-Palestinian peace?

If you support a Palestinian state, this is bad news. In the past, Israel has offered to withdraw from nearly all of the West Bank in exchange for a peace agreement. But making much of the West Bank part of Israel would foreclose the possibility that it would one day become part of a state of Palestine.

Dennis Ross, a former U.S. negotiator in Israel, tweeted that after annexation, Palestinians would abandon hope of their own state and start demanding full citizenship and rights in Israel.

If Netanyahu acts on his annexation statement, Israel will no longer be able to separate from Palestinians. One state for two peoples will result. Expect Palestinians to start saying ok, let’s have one person one vote. Will that not resonate everywhere, including the US?

What are Israelis saying about it?

Some Israelis on the right have been advocating annexation for years. In 2012, Bennett proposed a full annexation of Area C. And most of the politicians in Netanyahu’s Likud party support some form of annexation.

Netanyahu’s centrist opponent in the election, Benny Gantz, has not commented on the prime minister’s statement. He’s focusing his fire instead on the corruption allegations against Netanyahu and a bunch of other issues.

But Tamar Zandberg, the chairwoman of the left-wing Meretz party, said Gantz should condemn the annexation vow.

“Annexing the settlements is dangerous for the state of Israel and an end to the vision of two states,” she tweeted Saturday, adding that she would push for “negotiations instead of annexation.”

What are Palestinians saying about it?

The Palestinian Authority hasn’t seen Netanyahu as a reliable negotiating partner for years. In 2017, after Trump recognized Jerusalem as Israel’s capital, the P.A. stopped talking with the United States because it sees eastern Jerusalem as a future Palestinian capital. And it’s threatened to stop cooperating with the Israeli army on security in the West Bank.

So will annexation happen?

Who knows? If Netanyahu loses, the annexation promise will probably go with him. And even if he wins, he’ll need the support of the other parties in his government coalition to pass any laws — especially something this major. So it all depends on what happens Tuesday. Polls show the race neck and neck.