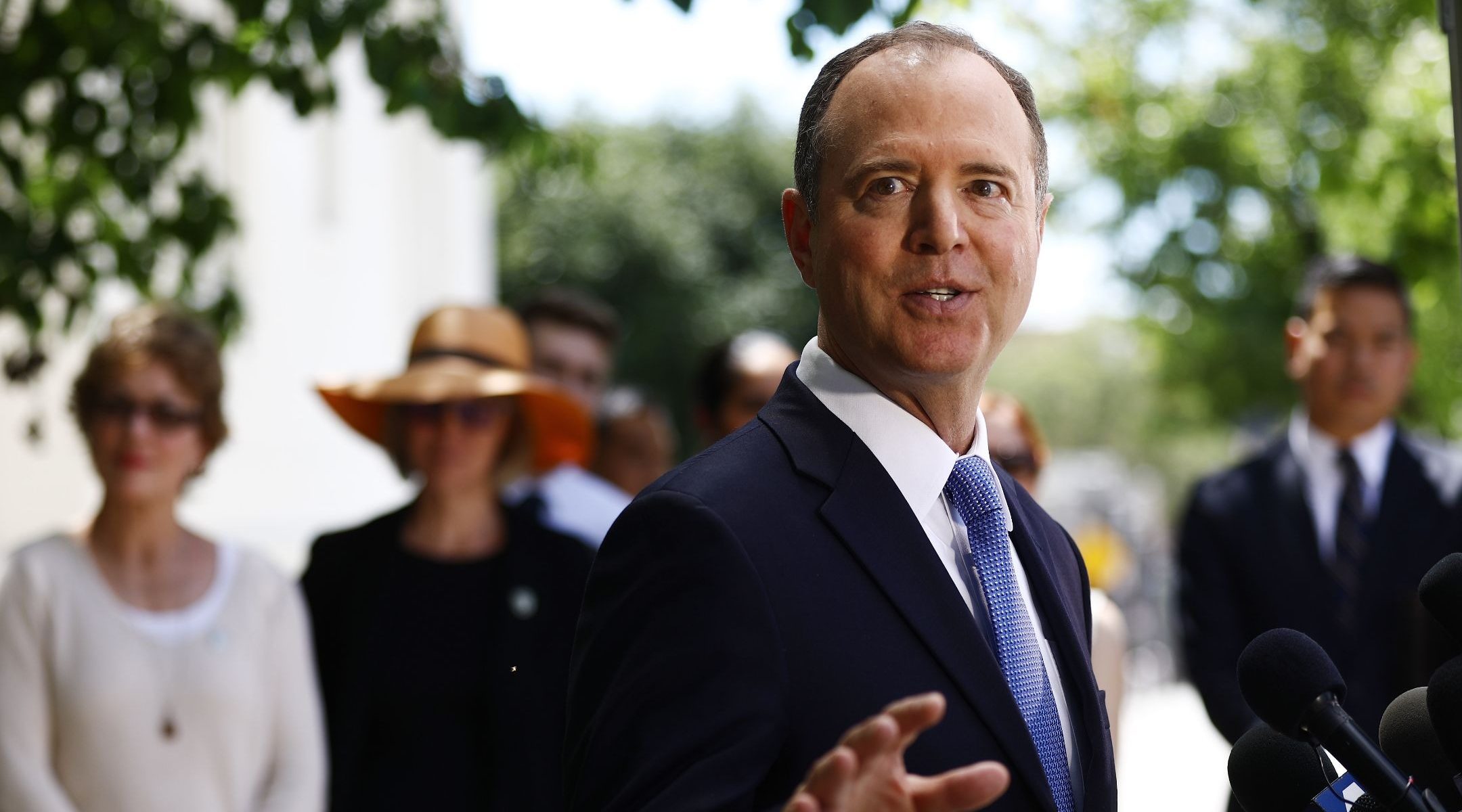 Rep. Adam Schiff, chairman of the House Intelligence Committee, speaks at a news conference in Burbank, Calif., on the release of the redacted Mueller report, April 18, 2019. (Mario Tama/Getty Images)
Advertisement

WASHINGTON (JTA) — “Pencil neck” is not the worst of it.

President Donald Trump’s most recent sobriquet for Rep. Adam Schiff, D-Calif., the Jewish chairman of the U.S. House of Representatives Intelligence Committee, is almost affectionate considering some of the other things that Trump has called his nemesis, including a scatological take on Schiff’s last name.

And considering that Republicans want Schiff removed from the committee, and investigated for improprieties, you might think Schiff would be rattled.

On Monday, writing in The Washington Post, Schiff said the investigations into Trump and Russia that have prompted presidential ire are far from over, and that even after special counsel Robert Mueller wrapped up his work, Schiff still suspects Trump was susceptible to foreign influence.

“The president’s personal financial interest” in a Russian real estate deal that Trump had concealed “and the need for Kremlin approval created an overwhelming conflict of interest,” Schiff said in arguing for the release of counterintelligence information on Trump-Russia dealings. “The president’s deceit about the project, and Russia’s knowledge of it, give Russia something to hold over him.”

Here’s a glance at why Republicans want Schiff taken down — and why it likely won’t happen, in part because of the company Schiff keeps.

What is the Trump administration beef with Schiff?

Schiff, 58, was front and center in the past two years, first as the ranking Democrat on the Intelligence Committee, and then as its chairman, in arguing forcefully on endless cable news appearances that there was evidence that the Trump campaign colluded with Russia in its bid to tilt the 2016 presidential campaign toward the Republican candidate.

That word — “collusion” — is what is now rankling Trump and his backers, who say that Mueller’s report, released last week, exonerates Trump of collusion.

“Democrats like Adam Schiff lied for two years and said there was ‘evidence of collusion,'” Ronna McDaniel, the chairwoman of the Republican Party, said on Twitter the day after the Mueller report was released. “Talk about a gross abuse of power. Schiff needs to resign.”

In fact, Mueller in his report said he was not looking for “collusion” because it has no legal meaning.

“Collusion is not a specific offense or theory of liability found in the United States Code, nor is it a term of art in federal criminal law,” he said in the introduction.

And that’s been Schiff’s pushback: When he charged collusion, he was not referring to evidence privy only to those with security clearances but what was there for everyone to see.

On Sunday, Schiff told ABC’s “This Week” that the evidence of collusion was “in plain sight.”

“I use that word very carefully,” the California Democrat said, “because I also distinguish time and time again between collusion — that is, acts of corruption that may or may not be criminal — and proof of a criminal conspiracy.”

He calls Trump’s alleged misdoings “worse than Watergate,” the 1972 political burglary and cover-up that led to the 1974 resignation of President Richard Nixon.

Appearing the same day on “Fox News Sunday,” Schiff pointed to a meeting that top Trump campaign officials had in June 2016 with Russians peddling what they said would be damaging information on Democratic nominee Hillary Clinton. That meeting included Trump’s son Donald Jr.; son-in-law Jared Kushner; and Paul Manafort, his since-imprisoned campaign manager.

“What more clear intent to collude could you have than the Russians offering dirt on Hillary Clinton as part of what was described as an effort to help Mr. Trump in the campaign and Don Jr. saying if it’s what you say, I would love it?” he said. (The trio ultimately declined to deal with these particular Russians.)

Judicial Watch, a conservative advocacy group close to Trump, wants the House Ethics Committee to investigate Schiff for his meeting last year with the owner of a private eye firm that produced a document on Trump-Russia ties that in parts has been debunked. The House minority leader, Rep. Kevin McCarthy, R-Calif., wants Schiff to explain the meeting before going forward with any investigations. Schiff and Glenn Simpson, the gumshoe, say the meeting was brief and happenstance.

Who are Schiff’s friends?

Nancy Pelosi: Referring to Republican attacks on Schiff, the House speaker on March 28 volunteered at her weekly meeting with reporters, “They’re afraid of the truth. They’re afraid of competence. They’re afraid of a leader who is recognized in our country for being calm, professional, patriotic. I’m so proud of the work of Chairman Adam Schiff, in stark contrast to the irresponsible, almost criminal behavior of the previous chair of the committee.” (Democrats allege that Rep. Devin Nunes, R-Calif., worked with Trump to undercut investigations.)

Democratic speaker backs Democratic chairman — no big surprise, right? Usually, yes, but the Intelligence Committee is different. Pelosi for a period was the committee’s top Democrat and has since then maintained a proprietary affection for its workings to the extent that she has clashed with Democrats who succeeded her. The most public face-off was with another Jewish Californian, Jane Harman.

In another media briefing, on Jan. 31, Pelosi paid Schiff the ultimate compliment: He was a worthy successor — to her.

“I’m very proud of Adam Schiff and the members of the Intelligence Committee,” Pelosi said, adding that she tracked his work “very closely” and noting that she was once in his slot.

The pro-Israel community: Schiff is a solid centrist on Israel. He joined most other Jewish Democrats in backing the 2015 Iran nuclear deal, but that might be the only mark against him in the spectrum of “pro-Israel” as defined by the American Israel Public Affairs Committee. Pelosi, mentioning Schiff’s name at the AIPAC policy conference last month, drew applause.

Schiff took money last election cycle from four pro-Israel political action committees on the center and the right, and he is not endorsed by the PAC associated with J Street, the liberal Jewish Middle East policy group. He routinely makes appearances at establishment Jewish events in Washington, D.C., and in his home state.

In December 2016, he broke with the Obama administration and opposed its decision to allow a U.N. Security Council resolution critical of Israel’s settlement policy to go through without a U.S. veto.

“Unilateral resolutions of this kind do not advance the cause of peace, and I would urge the administration to make every effort to oppose it being brought forward and make it clear that it will veto the measure if necessary,” he said at the time.

The Armenian community: Schiff’s signature foreign policy issue before he became the Democratic point man on Trump-Russia was arguing for U.S. recognition of the Ottoman-era Turkish massacre of Armenians as a genocide. His Southern California district has the largest concentration of Armenians in the country.

“From the very beginning, they welcomed me like I was part of the family,” he told The Armenian Mirror-Spectator last year. “I know what it’s like to be part of a people with affinity for a distant country.”

Schiff also confessed to favoring Armenian kebab — until he became a vegan.

Dodger fans: In 2015, when Schiff’s beloved Los Angeles Dodgers met the New York Mets in the National League Division Series, he made a bagels bet with then-Rep. Steve Israel, D-N.Y.

And not just bagels. The loser had to sing the winner’s fight song on the House floor. Schiff gamely, if painfully, complied.