I used to avoid everything Holocaust related. This Auschwitz exhibit changed my attitude. An original barrack from Monowitz, a labor and concentration camp that was part of the Auschwitz complex, is featured in the exhibit "Auschwitz. Not long ago. Not far away" at the Museum of Jewish Heritage-A Living Memorial to the Holocaust in New York City. (Josefin Dolsten)
Advertisement

NEW YORK (JTA) — As a teenager, whenever my mother would suggest watching a Holocaust film, I would groan. I always felt that the Shoah already was close enough.

My father had shown me the letters my great-grandfather wrote from a concentration camp in Poland to his daughter, who had managed to escape Austria before the deportations. At one point the letters just stopped, a fact too horrible for me to dwell on.

I had learned, too, about the Holocaust in school, through my synagogue and Jewish camp. I felt inundated by the Shoah and had no desire to have it take over another aspect of my life.

So when my editor asked me to cover a Holocaust-related exhibition at the Museum of Jewish Heritage-A Living Memorial to the Holocaust in downtown Manhattan, I wasn’t thrilled.

With more than 700 original items from Auschwitz and 400 photographs, the exhibition is the world’s largest-ever traveling exhibition about the Nazi death camp and promised an immersive experience that did not much appeal to me.

But duty calls, so I signed on, joking to my friends that they better take me out for some drinks that night. I told them I was worried that the exhibition might suck me into a dark hole of sadness that would take days, if not weeks, to get out of.

At the exhibition’s media preview on Thursday, I tell the chief curator, Robert Jan van Pelt, about my trepidation.

“We try to tell the story in a way that it doesn’t incapacitate you,” says van Pelt, one of the world’s foremost experts on Auschwitz.

“I think that it is good to be moved, to be touched at various occasions,” he continues. “And people get touched at different places, but ultimately you have to walk out of here with a renewed sense of purpose.” 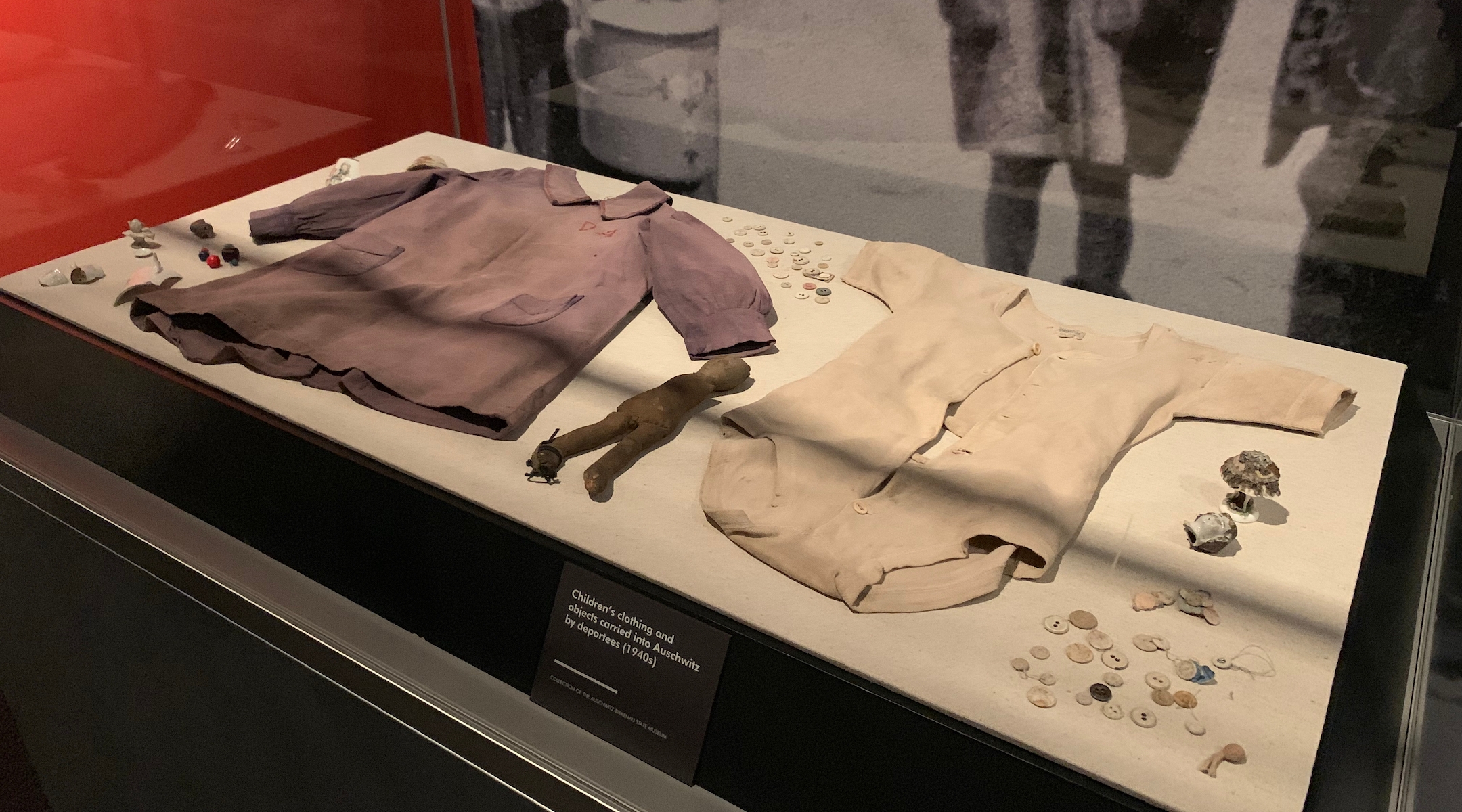 The exhibit features items taken from children at Auschwitz, including clothes, buttons and a doll. (Josefin Dolsten)

The final rooms of the exhibition, which is titled “Auschwitz. Not long ago. Not far away” and opens on May 8, deal with those who resisted the Nazis and the liberation of the camps.

“It’s important for us also to stress that people are not simply only victims,” van Pelt says.

That being said, the vast majority of the exhibition centers on the horrors that took place at the largest of the Nazi death camps. The hundreds of objects from the camp, located in Oswiecim, Poland, almost start to blend together. There are simply too many for me to focus on the tragedy that each of them represents.

Among the objects is an original wooden barrack from Monowitz, a labor and concentration camp that was part of the Auschwitz complex. Inside, tools from the camp on display include a large kitchen pot and eating utensils. Next to that is a glass case with a wooden stretcher used to carry sick prisoners. The white fabric that stretches across the frame is still stained.

In another glass case, I find myself looking at a yellowed undershirt with ritual fringes traditionally worn by observant Jewish men. This one was worn by an Auschwitz prisoner named Mendel Landau.

A number of items that belonged to children — multicolored buttons, a shirt and onesie, a shabby looking doll — stand out. While noticing how plain and ordinary they look, I cannot help but think of the fate that their owners met shortly after the items were confiscated.

The idea to assemble all these items — they come from 30 museums and private collections around the world — came to a non-Jewish Spaniard, Luis Ferreiro, in 2009. Ferreiro, from San Sebastian, says he was inspired both by his brother’s death a year earlier and the book “Man’s Search for Meaning,” in which Viktor Frankl chronicles his experiences in Nazi concentration camps.

“I remember closing the book and I had this feeling that you need to share that particular story,” Ferreiro tells me.

His family owns Musealia, a company that specializes in traveling exhibitions, so he decided to use the format with which he was familiar. 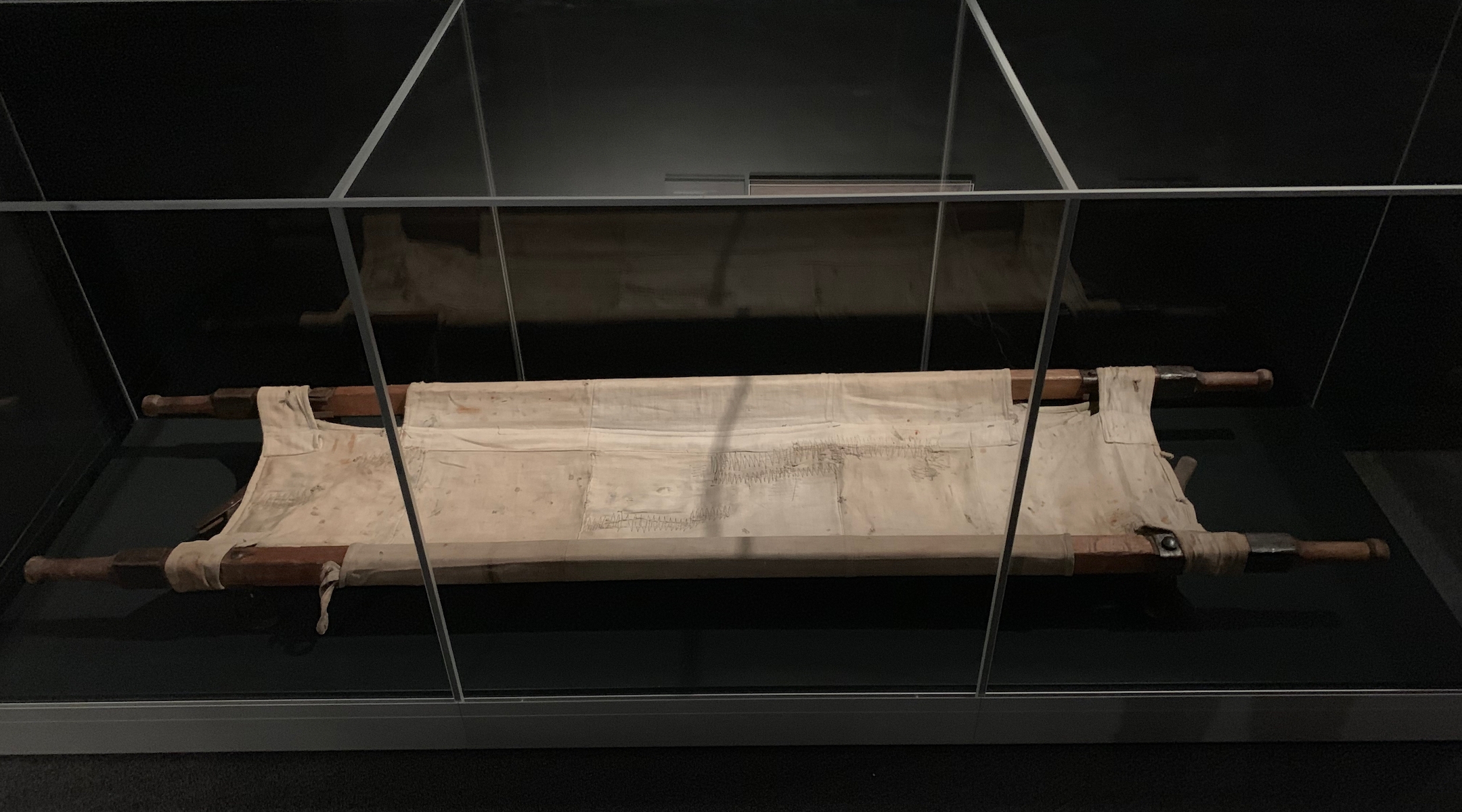 This stretcher was used to carry sick people at Auschwitz. (Josefin Dolsten)

Early on in the process, Ferreiro approached Piotr Cywinski, the director of the Auschwitz-Birkenau State Museum in Oswiecim.

“We never did any exhibition with a commercial firm, so we were surprised at the beginning, to be frank,” Cywinski tells me. “And never any traveling exhibition so huge. It was never done on the Holocaust.”

But with time, he came to see it as a great opportunity to educate more people about the Holocaust.

“In the last years, we observed, not only in Europe but in many countries in the world, a growing of anti-Semitism, a growing of xenophobia, of hate speech,” Cywinski says. “We got the impression that we must do something more, not only waiting in Auschwitz for the people that can come.”

In December 2017 — nearly a decade after Ferreiro first had the idea — the exhibition premiered in Madrid, where it was extended twice and drew more than 600,000 visitors. New York is its second stop.

Cywinski says the plan after the exhibition finishes its run here in January is to bring it elsewhere, though the location has yet to be set.

“In a perverse way, we are lucky that this exhibition has become much more relevant politically and socially than originally we thought,” he says.

But the exhibition doesn’t force any such connections. The phrase “Never again,” for example, does not appear. That was a conscious choice, van Pelt tells me. In teaching about the Holocaust, he avoids “moralizing” or telling people what to think, instead finding it more powerful to let them come to their own conclusions.

Leaving the museum, I find myself clear minded. I haven’t descended into a black hole of sorrow. Having faced the largeness of the exhibition, I feel less frightened now of the Shoah’s power to overwhelm me. In a way, being confronted with the devastating effect of the Holocaust — millions of people killed, families destroyed — makes my own emotional state much less important.

Will I now go to watch all those Holocaust movies I refused to see as a teenager? Probably not. But I text my father to ask for the name of the concentration camp where my great-grandfather was killed.