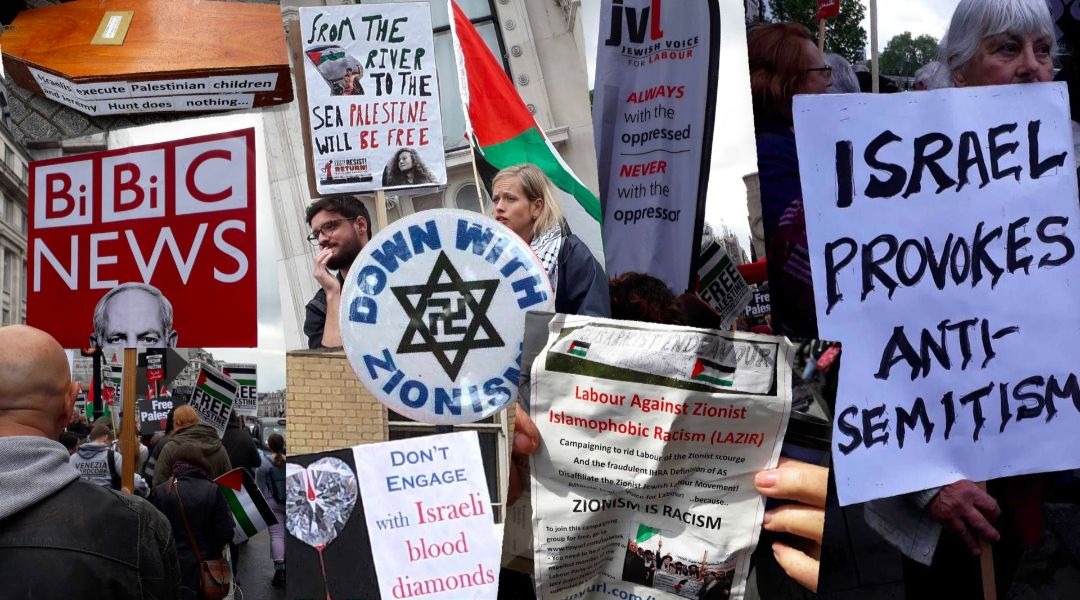 Signs carried and badges worn at the National Demonstration for Palestine in central London on May 11, 2019. (Courtesy of U.K. Campaign Against Antisemitism)
Advertisement

(JTA) — Thousands of pro-Palestinian demonstrators marched through central London for the National Demonstration for Palestine.

The marchers called to “free Palestine,” for a “right of return” for Palestinians, and for the end to “unprecedented attacks on Palestinians by Israel.”

Sunday’s demonstration, which marks the 71st anniversary of the Nakba, or catastrophe, referring to the formation of the state of Israel, was organized by the Palestine Campaign with the support of Stop the War Coalition, Palestinian Forum in Britain, Friends of Al-Aqsa and the Muslim Association of Britain, as well as several trade unions and the Momentum faction of the British Labour Party.

The march was led by Ahed Tamimi, the activist teen who became a Palestinian national symbol after being jailed in Israel for aggravated assault, hindering a soldier in the line of duty, incitement, threatening a soldier’s life and rock throwing, including one incident caught on video in which she slapped a soldier.

At the protest, Tamimi called herself a freedom fighter and said “From the river to the sea, Palestine will be free.”

A small counterprotest was held by pro-Israel activists, according to the U.K. Campaign Against Anti-Semitism.

Labour Party leader Jeremy Corbyn, a far-left and anti-Israel politician who has faced allegations that he himself is promoting anti-Semitism in Labour, a party that has been accused of fomenting institutional racism, offered his support to the demonstrators in a statement that he also posted on Facebook.

“We cannot stand by or stay silent at the continuing denial of rights and justice to the Palestinian people,” Corbyn said. “The Labour Party is united in condemning the ongoing human rights abuses by Israeli forces, including the shooting of hundreds of unarmed Palestinian demonstrators in Gaza — most of them refugees or families of refugees — demanding their rights.”

“Last week’s escalation of violence, during raids on Gaza, killing 25 Palestinians, and four Israelis, is both distressing and dangerous – and a reminder of the risk that full-scale conflict can return at any time,” Corbyn also said. He added that a Labour government would recognize a Palestinian state and return to “meaningful negotiations.”

During the march, Jewish Voice for Labour Secretary Glyn Secker made a speech claiming that Jews were “in the gutter” and “part of the problem.” The address was met with loud applause and cheers.

Secker also accused “American rabbis” of fueling the neo-Nazis behind anti-Semitic terrorism, including the fatal terrorist attack on the Poway synagogue, and claimed that they were “unleashing the extreme-right to win key votes in marginal states which determine the presidency,” according to the Campaign Against Anti-Semitism.

He called the 119 Labour lawmakers who are “friends of Israel” a “fifth column in the Labour Party.”

— Campaign Against Antisemitism (@antisemitism) May 11, 2019