Save the planet, don’t cremate, says this Jewish cemetery 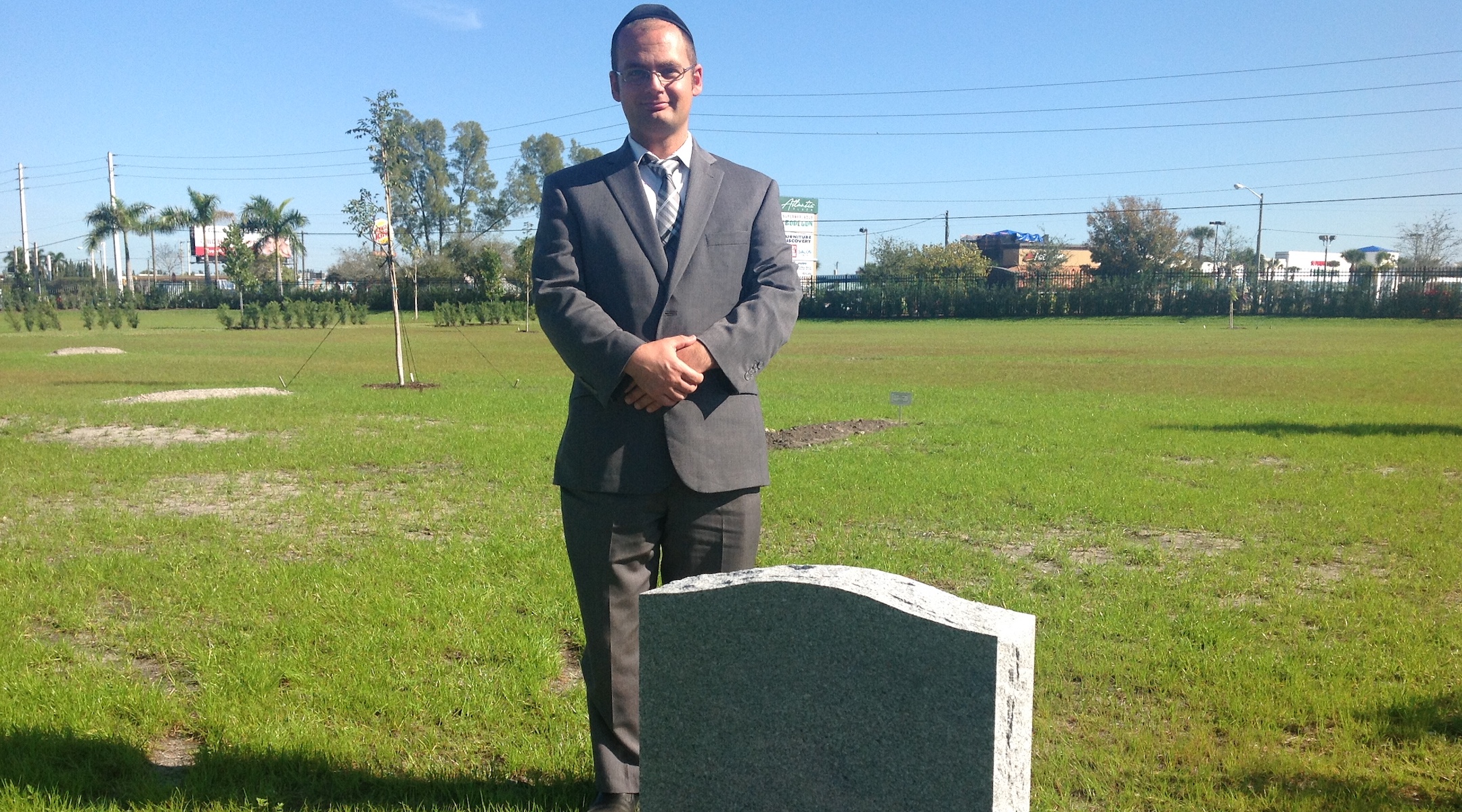 LAKE WORTH, Fla. (JTA) — When Rabbi Jay Lyons prepares a dead body for burial, it feels like he’s in synagogue on the holiest day of the Jewish calendar.

Lyons, along with other Jews charged with caring for the dead, will first strip the body of its clothes. The entire body is then bathed and wrapped in white shrouds. It’s watched over, uninterrupted, until burial.

In Jewish tradition, the white garment is meant to mimic the dress of the Jewish High Priest on Yom Kippur when the Holy Temple stood in Jerusalem 2,000 years ago. Just like Jews on the Day of Atonement, Lyons said, the departed are about to present themselves before their creator.

“The soul is about to go on this amazing final journey and basically have its final day of atonement,” he said in an interview at the new Jewish cemetery he founded here this year. “We’re very much aware of the fact that the body and soul are partners for life. The body is now useless, but in reality the soul isn’t just going to move on and cast it aside. The soul needs the body to be taken care of properly, even after death.”

That’s the idea behind Lyons’ new venture, the South Florida Jewish Cemetery in Palm Beach County, which he advertises as both trendy and radically traditional: In an age when a majority of Americans opt for cremation, he is asking Jews to bury their dead the way Jewish tradition has commanded for millennia.

But Jewish burial, he’s quick to add, is also green burial — a selling point for families who may not be religious but care about reducing their carbon footprint in death as in life.

“From the environmental point of view, you’re preserving the land, you’re taking what could have been used for a crematorium and ensuring that it’s going to be a grassy, tree-filled place,” said Lyons, 40. “There are plenty of Jews out there who are more concerned about the environment than about Jewish tradition.”

As of 2017, a majority of people in the United States and Canada cremate their dead — up from around 28 percent in 2002, according to the Cremation Association of North America. But advocates of natural burial are also pointing to cremation’s environmental impact. One cremation releases more than 800 pounds of carbon dioxide into the atmosphere and uses as much energy as a 500-mile car trip, according to the Natural Death Centre, a British charity that advocates green burial.

Hillside Memorial Park, a Jewish cemetery in Los Angeles, offers a green burial option in which no toxic or non-biodegradable materials or chemicals are used in preparing the body or casket. Options include an “eco-friendly” woven willow casket lined with natural unbleached cotton.

West View Cemetery in Pittsburgh, associated with Rodef Shalom Congregation, has set aside an area for burials that comply with current standards for minimal environmental impact.

“You’re seeing a lot more interest, especially among the baby boomer generation, in returning to the earth as naturally as possible,” said Gail Rubin, a funeral planning expert in Albuquerque, New Mexico. “And the funeral industry is seeing that as an opportunity to save their business model because they don’t make as much money with cremation.”

Despite the Jewish religious taboo on cremation, more Jews appear to be opting for cremation, too. A cemetery manager and funeral director in South Florida agreed that they’ve seen local Jewish cremation rates grow to about 15 percent of all services from as little as 2 percent in the 1970s.

Jews and others choose cremation because it’s much cheaper than traditional burial, said Laurie Dockler, general manager of Menorah Gardens & Funeral Chapels, northwest of Miami. She estimated that cremations cost $5,000 to $10,000, as opposed to $15,000 to $20,000 for a traditional burial.

Lyons’ cemetery is hoping to compete with cremation on cost as well as values. Lyons charges $3,600 for the plot and burial, not including a monument, which can cost anywhere from $800 to a bit more than $4,000.

The cemetery is a project of the National Association of Chevra Kadisha, which provides resources to Jewish burial societies and advocates traditional Jewish burial. Lyons is trying to keep the costs low by operating as a nonprofit with $4.5 million of startup costs and an annual budget of $1 million, which comes mostly from Orthodox donors in the area and across the country. The cemetery has eight employees.

By keeping the entire process natural, the cemetery limits its emissions. Graves are dug by hand, and the monuments are small enough (a plain gray tombstone about 3 feet high) that they can be carried by hand truck. Bodies are not embalmed, per Jewish tradition, and are buried in plain wooden coffins without concrete vaults, such that everything is biodegradable.

While the cemetery looks like an empty green field, Lyons plans to pave paths for golf carts for those who need assistance reaching graves. His staff has buried 32 people to date and reserved some 160 plots. In total, the 15-acre cemetery can hold about 15,000 plots. On a weekday earlier this year, a team of four Jewish men in T-shirts and jeans prepared a plot for burial the next day with no machinery in sight.

A longtime local funeral director, Keith Kronish, said that the South Florida Jewish Cemetery is making traditional burial affordable for observant Jewish families. But he does not expect it to put other local Jewish cemeteries, which allow for both interment and cremation, out of business.

“There are always people that want the palatial appearance that other cemeteries can provide — they like the bling,” said Kronish, who runs Kronish Funeral Services in Boca Raton. “What the South Florida Jewish Cemetery is doing is saying, ‘Here’s an alternative.’ A lot of people like that.”

Rubin likewise does not expect Lyons’ take on traditional Jewish burial in and of itself to have mass appeal for American Jews, who are largely not Orthodox and often live in a different city than their parents.