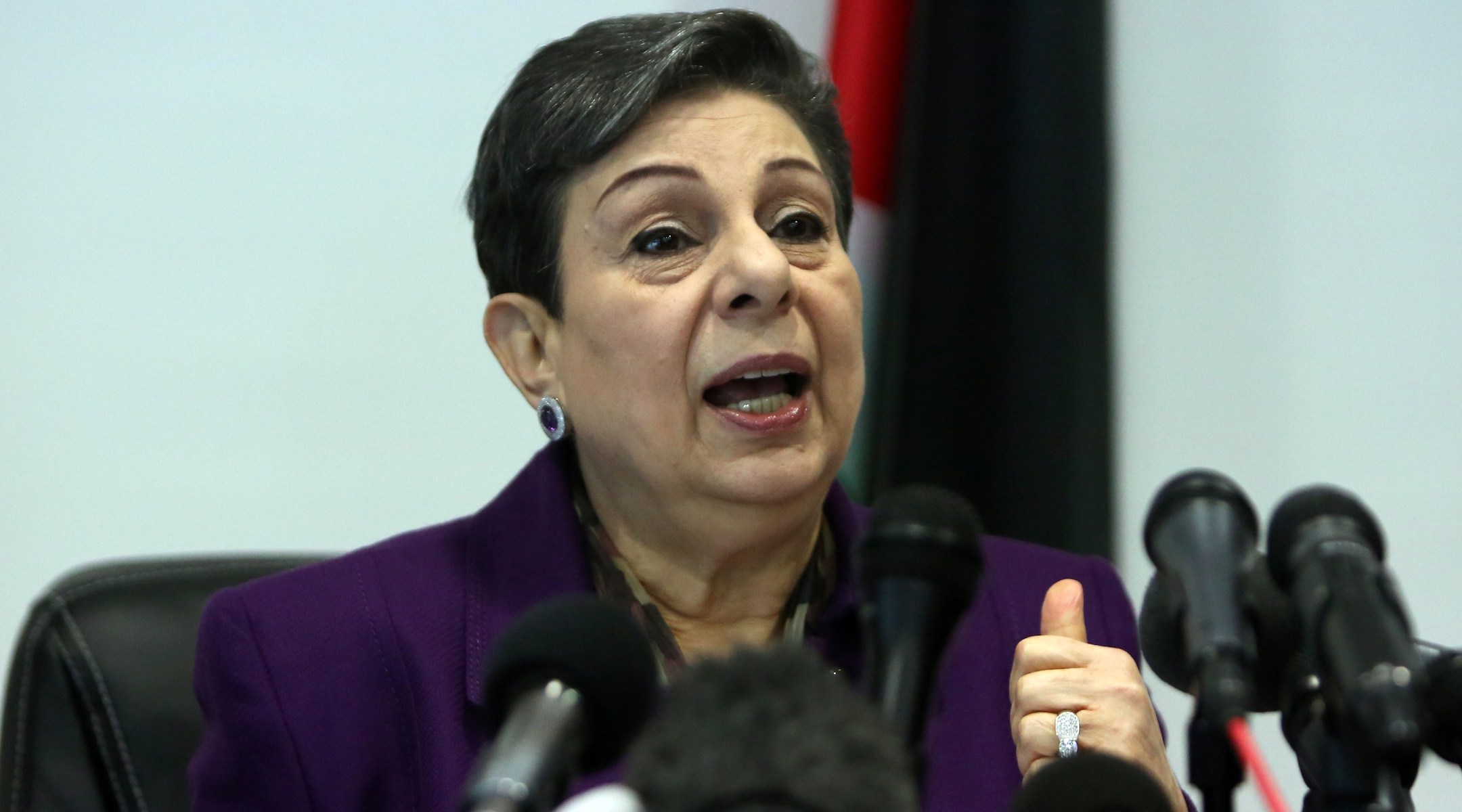 (JTA) — In December 1992, about nine months before the first Palestinian-Israeli peace accords were signed on the White House lawn, Hanan Ashrawi met with President George H.W. Bush in the Oval Office.

Now, 26 years later, she can’t even enter the United States.

Ashrawi, a longtime Palestinian spokeswoman and a current member of the Executive Committee of the Palestine Liberation Organization, tweeted Monday that her application for a U.S. visa was rejected.

“It is official! My US visa application has been rejected,” she wrote. “No reason given. Choose any of the following: I’m over 70 & a grandmother; I’ve been an activist for Palestine since the late 1960’s; I’ve always been an ardent supporter of nonviolent resistance.”

Ashrawi is the most recent and most prominent of at least three Palestinian activists to be barred from entering the United States this year. In February, activist Osama Iliwat was denied entry at John F. Kennedy Airport in New York and sent home. In April, Omar Barghouti, the co-founder of the Boycott, Divestment and Sanctions movement targeting Israel, was not allowed to board a flight to the United States at the direction of the U.S. government.

Iliwat and Barghouti held valid U.S. visas. In March, Iliwat was told he was being deported due to a desire to immigrate to the U.S., which he calls spurious. Like Ashrawi, both Barghouti and Iliwat said they do not know why they were denied entry. Iliwat told the Jewish Telegraphic Agency that Customs and Border Protection officials questioned him over the course of eight hours about his activism before canceling his visa.

Barghouti said he was denied entry due to his advocacy of an Israel boycott, and blamed Israel for motivating the Trump administration to ban him from speaking to American audiences. He also was traveling to attend his daughter’s wedding.

“[T]his ban seems to be an ideologically and politically motivated measure that fits in with Israel’s escalating repression against human rights defenders,” Barghouti wrote in a column in The Guardian. “With this denial of entry, Israel appears to have once again enlisted the Trump administration to do its bidding, this time to repress Palestinian, Israeli and international human rights defenders.”

Ashrawi said that after a lengthy bureaucratic process through the U.S. Embassy in Amman, where she applied for her visa, she was informed that her application was declined. She said that the embassy conveyed that the decision came from Washington, not the local consular staff. She is still awaiting a written notice of the rejection.

“They said Washington has decided,” she said. “They didn’t say the consular office in Amman has decided. I don’t think it’s a bureaucratic mixup at all. I’m convinced it’s purely political.”

The State Department told JTA that it evaluates visa requests on a case-by-case basis and visas are denied based on U.S. law. Customs and Border Protection does not comment on individual denials of entry.

But former officials and experts said that the string of denials suggests there may be a de facto ban on Palestinian activists, especially as President Donald Trump’s team prepares to publish its plan for Israeli-Palestinian peace. Experts stressed, however, that they do not know concretely of any change in policy.

“The Trump administration has not announced any change in U.S. policy when it comes to entry of Palestinians to the United States,” said Lara Friedman, president of the Foundation for Middle East Peace and a former U.S. foreign service officer in Jerusalem. “One [denial] could be just a random happenstance, two could be a coincidence. Three, it’s reasonable to ask whether or not there hasn’t been a de facto shift in U.S. policy that is denying visas to Palestinians to come to the U.S. based on their political views, which would be deeply troubling.”

Visa denials are up across the board since Trump took office, said Greg Siskind, an immigration lawyer, and are particularly high for people from Arab and Muslim countries. But he said U.S. officials have broad latitude in deciding who to admit to the country.

“There may be policies that are going on, but there may be things that are not specific to any one nationality,” he said. “It may very well be that they have been individually targeted.

Siskind said individual examiners have a great deal of discretion and there is no appeals process.

“It could just be fluky,” he said, “if there’s one examiner who knew who she was and they’re going to create problems with her.”

But Friedman said that in her experience, an everyday bureaucratic mix-up would be less likely for someone like Ashrawi.

“Someone with the stature of Hanan Ashrawi doesn’t just go through the regular diplomatic process,” she said. “It gets noted. She’s had a visa for years. She travels here often, and over a long period of time. To not give her a visa this time is a significant change.”

If the activists are being barred due to their ideology, it wouldn’t be the first time that has happened in the United States, according to a report by the American Civil Liberties Union. The report says the country has sought to prevent speakers from entering based on their ideology since at least the Cold War. Previous activists who were barred from entering include Pierre Trudeau, who later became Canada’s prime minister, and Mahmoud Darwish, the Palestinian poet.

“The thing all these people have in common is their activism on behalf of freedom for Palestinian people,” said Diala Shamas, a staff attorney for the Center for Constitutional Rights, a legal advocacy group that advocates for Palestinian causes. “It’s troubling to see that we are in a place where the U.S. administration is choosing to revoke them from coming to the U.S. to speak, to advocate, to meet with Americans.”

Ashrawi’s denial is a bad move in light of the impending peace plan, said Daniel Shapiro, the U.S. ambassador to Israel under President Barack Obama. The Palestinian Authority stopped working with the administration following Trump’s recognition of Jerusalem as Israel’s capital. Shapiro said the U.S. should be seeking opportunities to hear from Palestinians.

“The administration says it wants to mediate the conflict, but in order to do that it needs to have a dialogue with both sides,” Shapiro told JTA, referring specifically to Ashrawi’s case. “You would think they’d be looking for ways to facilitate communication with Palestinians rather than closing them off.”

T’ruah, a liberal rabbinic human rights group, said barring Palestinians “only fosters hopelessness and extremism.” Rabbi Rick Jacobs, president of the Union for Reform Judaism, tweeted about Ashrawi that “We don’t need to agree with her (I often don’t) to recognize the value of hearing from her.”

If U.S. policy has changed, some suggest, it would be in line with an effort by the Trump administration to ratchet up pressure on the Palestinians ahead of the expected release of the peace plan — especially because the Palestinians refuse to engage.

Trump has closed the Palestinian diplomatic mission in Washington, D.C., as well as the Jerusalem consulate that served as the de facto U.S. diplomatic mission to Palestinians. It has cut $10 million of foreign aid that was supporting coexistence programs between Israelis and Palestinians; frozen $25 million in funding to Palestinian hospitals in eastern Jerusalem; halted all funding to the United Nations refugee agency that aids Palestinians; and slashed more than $200 million for humanitarian and development assistance in the West Bank and Gaza.

“There is a certain degree of personal vindictiveness probably because there’s an attempt at discrediting the [Palestinian] leadership and increasing the pressure,” Ashrawi said. “It’s part of a punitive mentality that’s ongoing, and I really think it’s not very mature.”

“The visa denial to Hanan Ashrawi is totally appropriate and should’ve been policy in every Western capital for every PLO leader since the Second Intifada,” he tweeted. “Otherwise they enjoy the perks of recognition with none of the costs.”

But even members of the Trump administration have called on Ashrawi to visit the U.S. Jason Greenblatt, the president’s special representative for international negotiations, tweeted in February that Ashrawi is welcome at the White House.

“Dr. Ashrawi- my door is always open to the PA & Palestinians to speak,” Greenblatt tweeted. “In fact, I’ve met many Palestinians over the past 14 months & continue to. I’m happy to meet anytime- you, Saeb & all your colleagues are ALWAYS welcome to visit me at the @WhiteHouse to speak in person.”

Greenblatt, however, has no authority over visa applications.

Dr. Ashrawi- my door is always open to the PA & Palestinians to speak. In fact, I’ve met many Palestinians over the past 14 months & continue to. I’m happy to meet anytime- you, Saeb & all your colleagues are ALWAYS welcome to visit me at the @WhiteHouse to speak in person. https://t.co/JTKi6Uq3uL