Why hasn’t Mel Gibson been cast out in Hollywood? 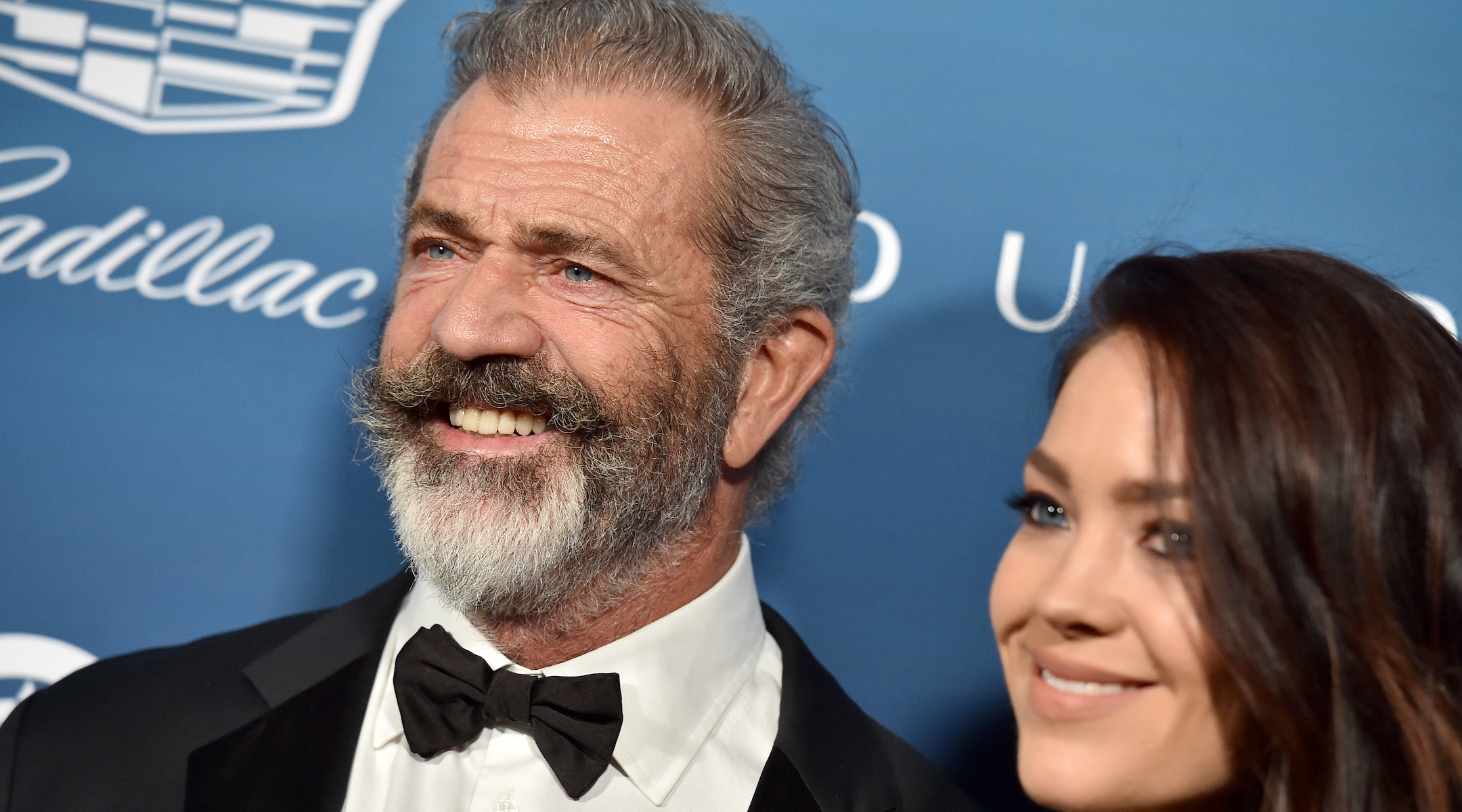 This piece originally appeared on Alma.

Mel Gibson is anti-Semitic. This isn’t just a guess, it’s actual fact based on things Gibson has said. He’s also a misogynist, racist, homophobe and all around (seemingly) terrible person. Yet he’s still working in Hollywood. Why?!

In case you think I’m overreacting, let’s take a walk through Mel Gibson’s past.

In 2006, when Gibson was being arrested for driving under the influence, he said, “F***ing Jews. The Jews are responsible for all the wars in the world.” (You can read the TMZ report, which published Gibson’s arrest report.) A few years earlier, Gibson had doubted that 6 million Jews were murdered in the Holocaust, telling an interviewer, “I mean when the war was over they said it was 12 million. Then it was six. Now it’s four. I mean it’s that kind of numbers game.” Yeah, sure, OK, the Holocaust is a numbers game!? (His dad, for what it’s worth, is a noted Holocaust denier.) He also called Jewish actress Winona Ryder an “oven dodger.”

Gibson’s 2004 movie “The Passion of the Christ” was deeply anti-Semitic, telling the story of the last 12 hours of Jesus’ life. When asked if it would upset “any Jewish people” (interviewer’s words, not mine), Gibson replied, “‘It may. It’s not meant to. I think it’s meant to just tell the truth … Anybody who transgresses has to look at their own part or look at their own culpability.” Love the trope of Jews-killed-Jesus casually dropped into interviews! (A great read on the anti-Semitism of the movie can be found in The Nation: “The Protocols of Mel Gibson.”)

In 2010, Mel Gibson’s then-girlfriend Oksana Grigorieva, with whom he has a child, covertly taped a call between them. Gibson tells her, “You look like a f***ing bitch in heat. And if you get raped by a pack of n****s it will be your fault. Alright? Because you provoked it. You are provocatively dressed all the time with your fake boobs that you feel you have to show off. I don’t like it. I don’t want that woman. I don’t want you. I don’t trust you. I don’t love you.” (If you have the stomach for it, the racist and graphic audio is here.) While this was happening, he was being investigated for charges of domestic violence.

And it goes back deeper than the 2000s (no surprise there). In 1991, Gibson mocked gay men in an interview with El Pais, and when GLAAD called on him to apologize, he said, “I’ll apologize when hell freezes over. They can f*** off.” In 1995, he told Playboy that he doesn’t believe men and women are equal.

But there was brief hope. In 2010, after the Grigorieva call leaked, it seemed like Gibson’s career was over.

But then it wasn’t.

Robert Downey Jr. tried to get Marvel to hire Gibson to direct “Iron Man 3.” Shane Black, a filmmaker who eventually got the “Iron Man 3” gig, told Uproxx in 2016, “Mel’s been really nice to a lot of people, including me. I’ll go on record saying I don’t believe anyone should be held accountable in any way for something they say while they are drunk. It’s not who they are. I know this because I’ve said horrible things to people and made them feel bad. And it wasn’t who I was, I was just drunk. Mel’s a great guy and I understand his new directing project is actually quite interesting. So, whatever. If you say something sober it’s one thing. If you’re drunk, you’re going to deliberately be belligerent just to piss people off.” Yeah, sure, let’s brush off abuse and racism and anti-Semitism because he was just drunk!

In 2016, Gibson directed “Hacksaw Ridge,” which garnered six Oscar nominations (including one for Gibson). That same year, he did an interview with Variety, in which Gibson said he had apologized for his behavior. “But others bring it up, which kind of I find annoying because I don’t understand why after 10 years it’s any kind of issue. Surely if I was really what they say I was, some kind of hater, there’d be evidence of actions somewhere. There never has been.”

News flash: There’s lots of evidence! Let us just direct you to his WikiQuote page, which is just filled with terrible things (and one apology). Or this Gawker piece, “All the Terrible Things Mel Gibson Has Said on the Record.”

And regarding that “Jews are responsible for all the wars” quote?

“I was loaded and angry and arrested,” he said. “I was recorded illegally by an unscrupulous police officer who was never prosecuted for that crime. And then it was made public by him for profit, and by members of — we’ll call it the press. So, not fair. I guess as who I am, I’m not allowed to have a nervous breakdown, ever.” Yeah, well, it doesn’t seem like you regret it, Mel Gibson.

Where does that leave us? We are in the midst of a so-called “cancel culture” and have seen movements like #MeToo take down prominent men in Hollywood (and rightfully so). Yet Mel Gibson is still working. And getting roles. And making movies. And getting Oscar nominations for those movies.

It was announced recently that Gibson would star in two new projects: “Rothchild,” seemingly about the wealthy Jewish banking family that is at the heart of anti-Semitic conspiracy theories — don’t worry, we’ll get into this hot mess in a bit — and “Fat Man,” a dark Christmas film.

First, regarding the Christmas film, Seth Rogen put it best:

Like, why let this dude play Santa? Why let him play anything! Seriously, why!?

OK, but Santa aside, let’s talk about the “Rothchild” movie. While this hasn’t been spelled out, many are making the connection to the Rothschilds, a wealthy Jewish British banking family at the heart of many anti-Semitic conspiracy theories. (Read more here in “All The Jewish Conspiracies Surrounding the British Royal Family,” which is an article we unfortunately had to write!)

The premise of “Rothchild” – also starring Shia LeBeouf, who was born Jewish (Shia, WYD?!) — is a “a dark comedy about New York’s super rich.”

“LaBeouf plays Becket Rothchild, who was cast out from the family. As an adult the charismatic Beckett hatches a plan to get back into the family and claim his birthright. There are nine Rothchild family members who stand between him and his fortune including Whitelaw (Gibson), the family patriarch and villain of the piece,”  Variety explains.

Anti-Semite Mel Gibson will star in a “satire” about the wealthy Jewish family that is the subject of one of the most prevalent anti-Semitic canards.

Who knows, maybe noted anti-semite Mel Gibson will bring a measure of subtlety and nuance to his portrayal of a wealthy Jewish banking scion.

mel gibson: *threatens to burn down his wife’s home, rape her, hopes she gets raped, calls her all kinds of bitches and whores, says black people are animals, and says jewish people started all the world’s wars*

hollywood: what a misunderstood guy :/

There are so many things wrong with the fact that Mel Gibson is still working, but as one Twitter user pointed out, it shows that problematic men don’t get “canceled” easily.

Mel Gibson's completely unearned comeback should be all the proof you need that so-called "cancel culture" is a myth.

In September, Constance Grady wrote in Vox how Mel Gibson “set the blueprint for the #MeToo comeback.”

“Looking at how Mel Gibson has managed his comeback shows us how the men accused of sexual misconduct over the past year might plan to manage their own,” Grady writes. “Gibson is a case study in how a man who by his own admission did monstrous things can convince people that disappearing from the public eye for a few years makes up for those monstrous things, and how he can find his way back into polite society.”

Grady explains the four major parts of Gibson’s comeback: One, he only grants interviews to friendly outlets. Two, he portrays himself as the victim. Three, he does not apologize: “He does not express good wishes for the people he’s hurt. He maintains that he is the one who was really hurt. But mostly, he doesn’t say anything at all.” And last, he doesn’t say much — he lets others defend him.

“If your goal is to convince the world to forget that you have been credibly accused of doing terrible things, and to find a way to once again work in the uppermost echelons of Hollywood, then Gibson is an admirable role model,” Grady convincingly argues.

At the 2019 Oscars, Trevor Noah made a Mel Gibson joke — “Even backstage, Mel Gibson came up to me and said ‘Wakanda forever.’ He said another word after that, but the ‘Wakanda forever’ part was nice” — affirming the fact that everyone in Hollywood knows Mel Gibson is a racist, but they aren’t doing anything about it.

Which, to be blunt, sucks. Cancel Mel Gibson, for real.

Emily Burack
Emily Burack is Alma's deputy managing editor.
The views and opinions expressed in this article are those of the author and do not necessarily reflect the views of JTA or its parent company, 70 Faces Media.