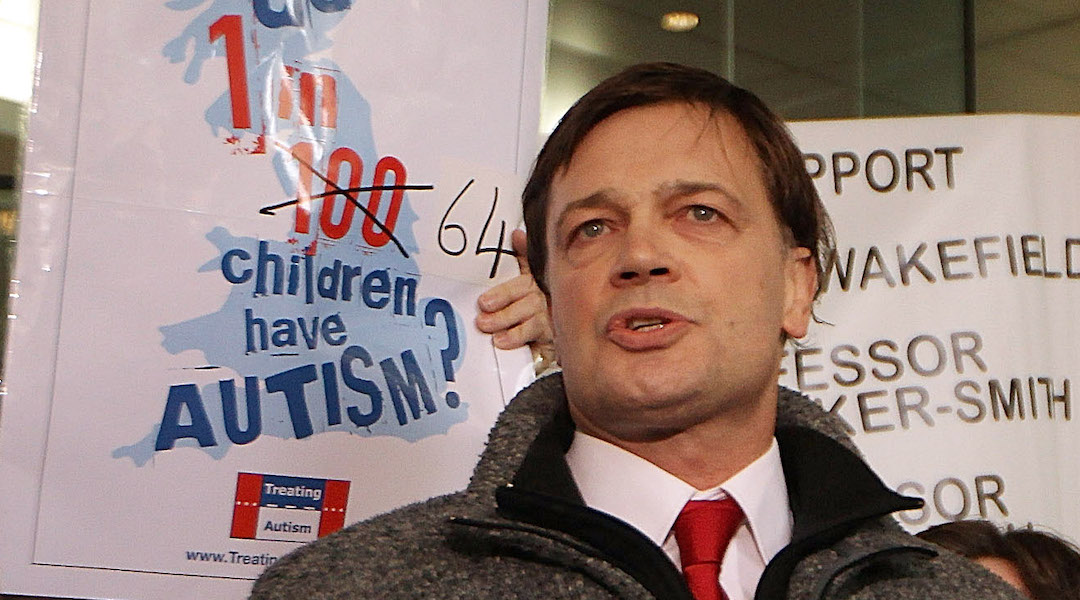 Dr. Andrew Wakefield, the first clinician to suggest a link between autism in children and the triple vaccination for measles, mumps and rubella, in London, Jan. 28 28, 2010. He spoke at a rally in Monsey, N.Y., May 13, 2019. (Peter Macdiarmid/Getty Images)
Advertisement

(JTA) — Jews are being persecuted as disease carriers amid the outbreak of measles, a New York haredi Orthodox rabbi said at a symposium with leaders of the anti-vaccination movement attended by hundreds of haredim.

“We Hasidim have been chosen as the target,” said Rabbi Hillel Handler, a Holocaust survivor from Monsey, a Rockland County town with a large haredi population, according to The New York Times. “The campaign against us has been successful.”

The Centers for Disease Control has reported a total of 839 cases of measles in 23 states as of Monday, the highest number since 2000, when measles was considered eradicated. The outbreak has been centered in New York City and state: The city alone has seen 498 confirmed cases since September, with a large number in Orthodox neighborhoods in Brooklyn. In the rest of New York state there have been 274 confirmed cases, according to official figures, with about 80 percent located in Rockland County.

The CDC pinned the resurgence on the unvaccinated and those who brought back measles from other countries. The outbreaks in Orthodox Jewish communities have been associated with travelers who carried the disease back from Israel and Ukraine, according to the CDC.

Among the speakers at the Monsey event on Monday were Dr. Andrew Wakefield, the British physician whose study linking measles vaccines with autism has been condemned, appearing via Skype; and pediatrician Dr. Lawrence Palevsky, who is regularly cited in pamphlets circulated in New York City that urge women not to get their children vaccinated, The Times reported.

Palevsky said failed vaccines are being given in the haredi communities.

“It’s fascinating because we’re told how contagious the disease is, but somehow it’s centered in the Jewish community.”

The meeting, which featured separate seating to accommodate the religious observance of the haredi community, was denounced by local elected officials, health authorities and some haredi rabbis, according to the newspaper.

Last month, New York City Mayor Bill de Blasio declared a public health emergency over the measles outbreak in Brooklyn’s haredi Orthodox community. De Blasio ordered unvaccinated people living in four ZIP codes in the Williamsburg neighborhood to get the vaccine or be required to pay fines of up to $1,000.

Meanwhile, on Monday, the Yeshiva of Central Queens was ordered closed after failing to comply with a Health Department order to prevent unvaccinated students from coming to school. It is the ninth Orthodox Jewish school to be ordered closed over the measles epidemic but the first outside of Brooklyn.

On Tuesday, hundreds of New York parents against vaccinations rallied outside the state capitol in Albany calling on lawmakers to protect a state law that permits people not to vaccinate their children for religious reasons, The Associated Press reported. Some lawmakers have proposed eliminating the religious exemption in light of the current measles outbreak.

Getting yourself and your family vaccinated against the measles is one more way to give back to your community. It protects the most vulnerable from danger, and it's totally safe and easy. pic.twitter.com/bPYJof3Qr5