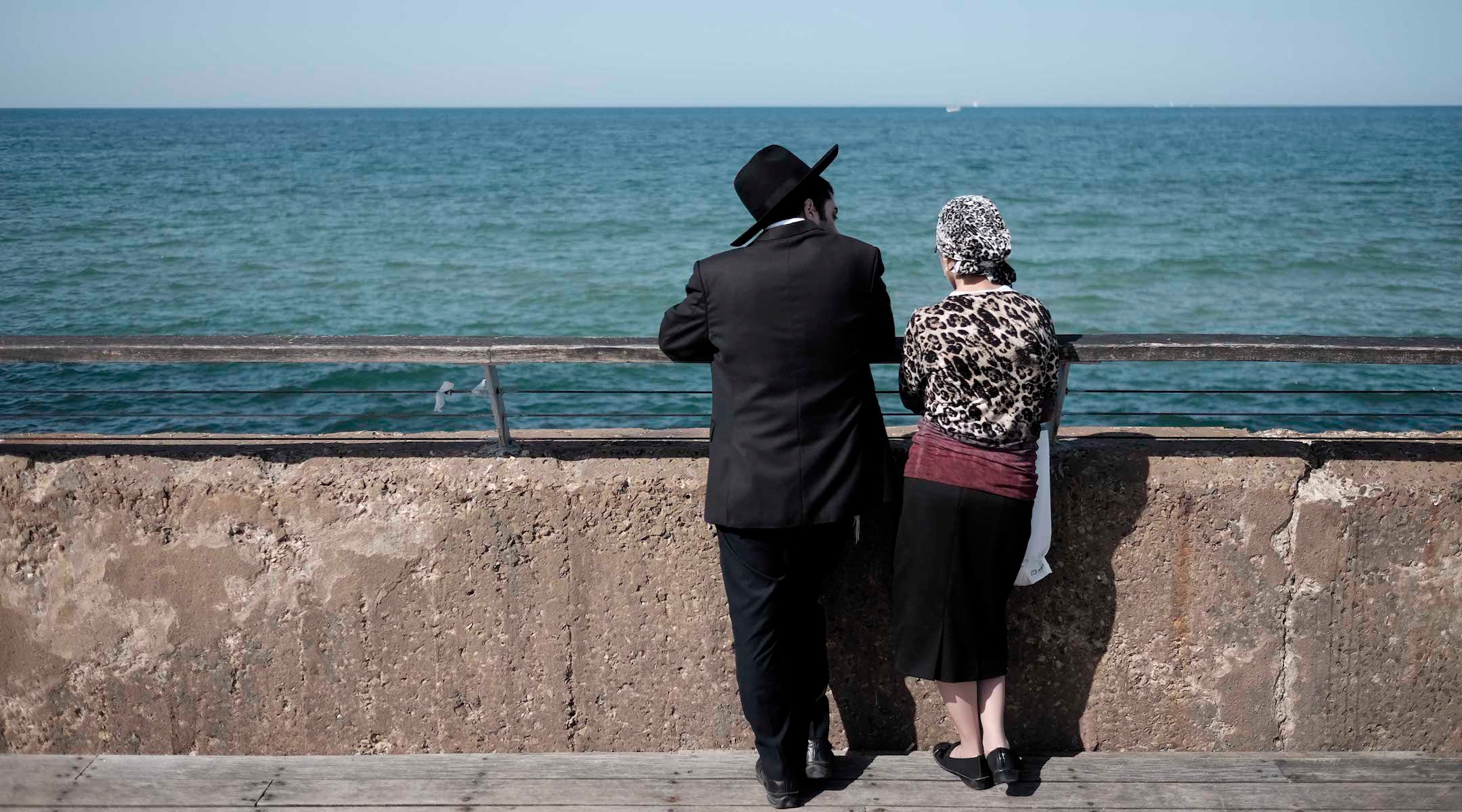 An illustrative photo of an Orthodox couple. (Tomer Neuberg/Flash90)
Advertisement

(JTA) — A few months ago, a couple got involved in the Chicago Jewish community. Rivkah Weber and David Costello started attending an Orthodox synagogue in the West Ridge neighborhood. They looked and acted like Orthodox Jews: Weber covered her hair and wore long skirts, while Costello sported sidelocks and a kippah. The latter took a job at a kosher supermarket.

But on Wednesday, warnings started spreading on Jewish Facebook groups in Chicago and beyond saying the couple, the parents of two children, were actually Christian missionaries.

“[T]o answer the rumors, it is true that a couple moved into our community in the purpose of proselytizing … They are confirmed missionaries,” read one post, which contained photos of the couple dressed in traditional Orthodox garb.

Reached Friday by the Jewish Telegraphic Agency, the couple said they do believe in Jesus and that one reason they had become involved in the Jewish community was to spread their beliefs.

“We want Jewish people to recognize Yeshua as Moshiach and as a Jewish Messiah,” Costello said in the phone interview, using the Hebrew words for Jesus and the Messiah.

He claims that he never hid his beliefs if asked and spoke with people in the community about them, but would not specify how many. Costello, who peppers his speech with Hebrew and Yiddish words, said the family is sincere in their observance of an Orthodox lifestyle.

“We actually keep the Torah and the mitzvahs,” he said. “We actually have an Orthodox life in our house and every day of our life, and they are saying that it’s simply to deceive and to bring Jewish people to believe in Jesus.” He denies the claim.

On Thursday, JTA spoke with three rabbis who had interacted with the couple. None would allow their names to be printed in the article.

“People feel betrayed,” said one rabbi, who leads a community in Chicago. “If you want to believe in something and sell it, that’s your business. But to come into a community and portray to be something you’re not, prey on people, unsuspecting, is unacceptable.”

On Tuesday, the rabbi said, a Brooklyn man who was visiting the city attended services at a local synagogue and recognized Costello as the same person who had attended his synagogue at home for six months before congregants found out that he believed in Jesus and had ties to a missionary group.

The rabbi was informed of this and approached Costello the next day. 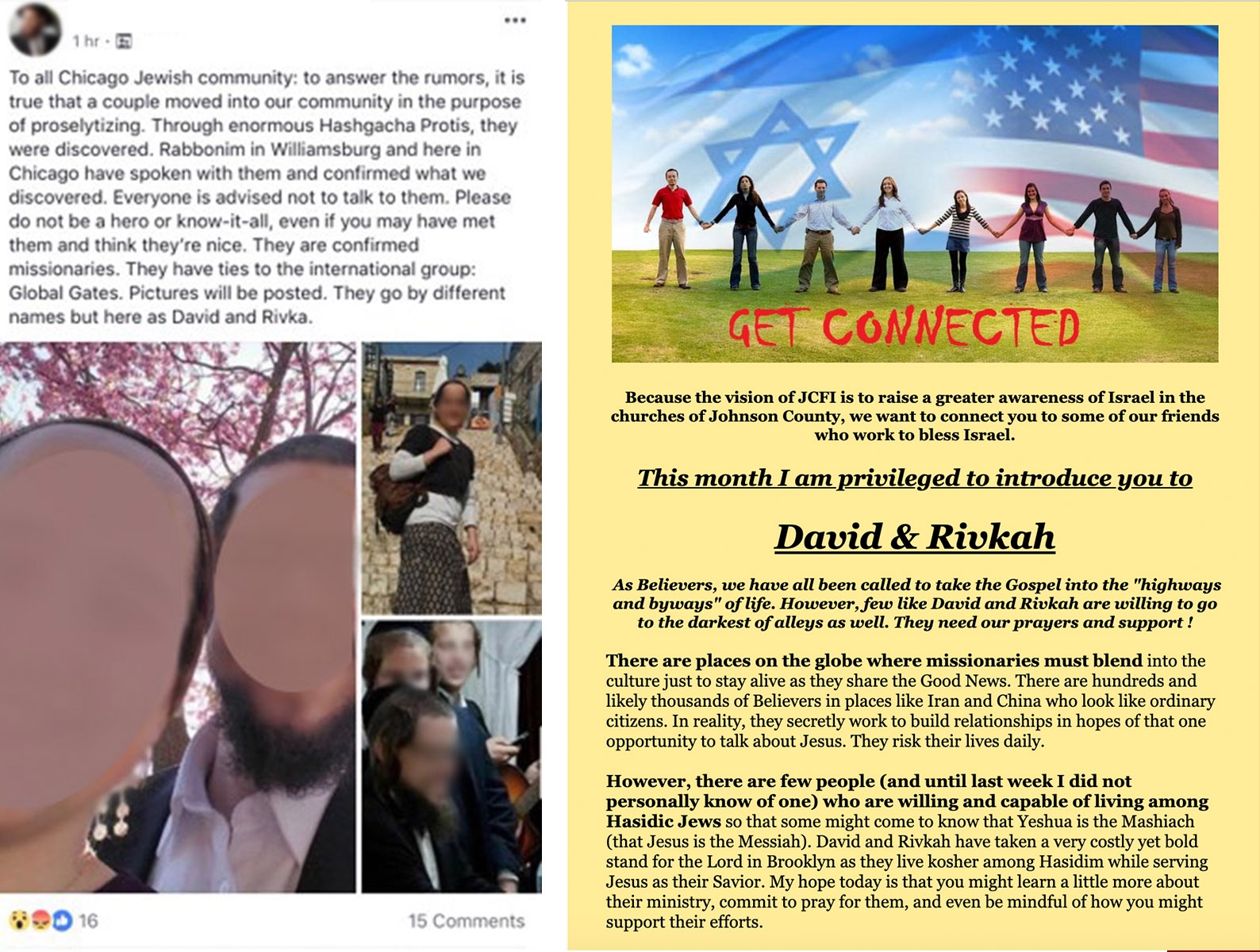 Members of the Chicago Jewish community issued Facebook warnings about a couple who presented themselves as Orthodox Jews but were Christian missionaries. At right, an evangelical newsletter in Texas wrote an admiring profile about the couple’s efforts to convert Jews.

COLlive, a community news site, quoted Rabbi Levi Notik of FREE, a Chabad community for Russian Jews, in a report about the pair. Notik said Costello did not deny his belief in Jesus when confronted.

“On the contrary, he insists that he is correct in his way and has no regrets,” the rabbi said.

JTA obtained a document from 2016 in which it said that David Costello was employed by Global Gates, an organization whose mission is “to see gospel transformation of the world’s most unevangelized people groups (sic) who have come to global gateway cities, and through them reach their communities around the world.” The organization names various Jewish and Hasidic groups in a listing of the “most significant unreached people group communities in Metro NY.”

Global Gates told JTA in an email on Thursday that the couple no longer worked for the organization.

“They were previously employed by Global Gates for less than a year. Their relationship with Global Gates ended in July 2017,” wrote David Garrison, the organization’s executive director.

Garrison would not answer additional questions about the nature of the the couple’s work.

Costello, 37, was raised in a Christian family in New Jersey but says his maternal great-grandmother was Jewish. He says his wife, 27, is from North Carolina and may have some Jewish ancestry on her father’s side but has not been able to verify it.

Though traditional Judaism believes in the concept of a Messiah, no Jewish denominations consider Jesus to be the Messiah. Messianic groups, such as Jews for Jesus, are not accepted as Jewish by the broader Jewish community, even though some adherents may have been born Jewish and their ritual life includes Jewish practices.

Costello denied reports that his wife had worked as a babysitter in Chicago and tried to talk to children about her faith.

Facebook posts circulating this week shared an article from the newsletter of Johnson County for Israel, an evangelical group based in Texas, that profiles a couple named “David and Rivkah” and describes their activities doing missionary work among Hasidim.

“David and Rivkah have taken a very costly yet bold stand for the Lord in Brooklyn as they live kosher among Hasidim while serving Jesus as their Savior,” the newsletter dated November 2016 reads.

Costello told JTA that he and his wife were the couple described, but that the newsletter inaccurately implied they had adopted an Orthodox Jewish lifestyle simply to convert people.

Another Orthodox rabbi and community leader in Chicago said that during Purim, some families had found gift baskets at their homes containing missionary materials but it wasn’t clear at the time who had put them there. The rabbi said he now believes it was the work of the couple. Costello denied he and his wife were behind this and said the couple had done something similar years ago, but not in Chicago.

The second rabbi, who had several interactions with the couple, had not suspected that they were missionaries, but said he had felt something wasn’t quite right.

For example, he said that Costello had vast knowledge about the Bible but spoke poor Hebrew. And though Weber dressed quite modestly, she did not always wear darker colors, as traditionally favored by Hasidic women, and did not correctly pronounce certain Hebrew and Yiddish words.

“I just thought that there was something off,” the rabbi said.

The second rabbi and community leader put JTA in touch with a rabbi in the Brooklyn neighborhood of Williamsburg who confirmed that the couple had been attending a synagogue there for six months before their beliefs and ties to Global Gates were revealed. The Brooklyn rabbi said the couple was told not to return to the synagogue after they stood by their beliefs.

Also in Chicago, the pair were told they were not welcome and Costello said he lost his job at the kosher store.

The first local rabbi, who said people felt betrayed by the couple, said the community had warmly welcomed Costello and Weber.

“They came to Chicago, they moved into their neighborhood, dressing and behaving outwardly like Hasidic Jews,” he said. “They were welcomed into the community and befriending everyone.”