In Belarus, Jews helped build a restaurant next to Stalin-era graves. Protests against it have turned anti-Semitic. 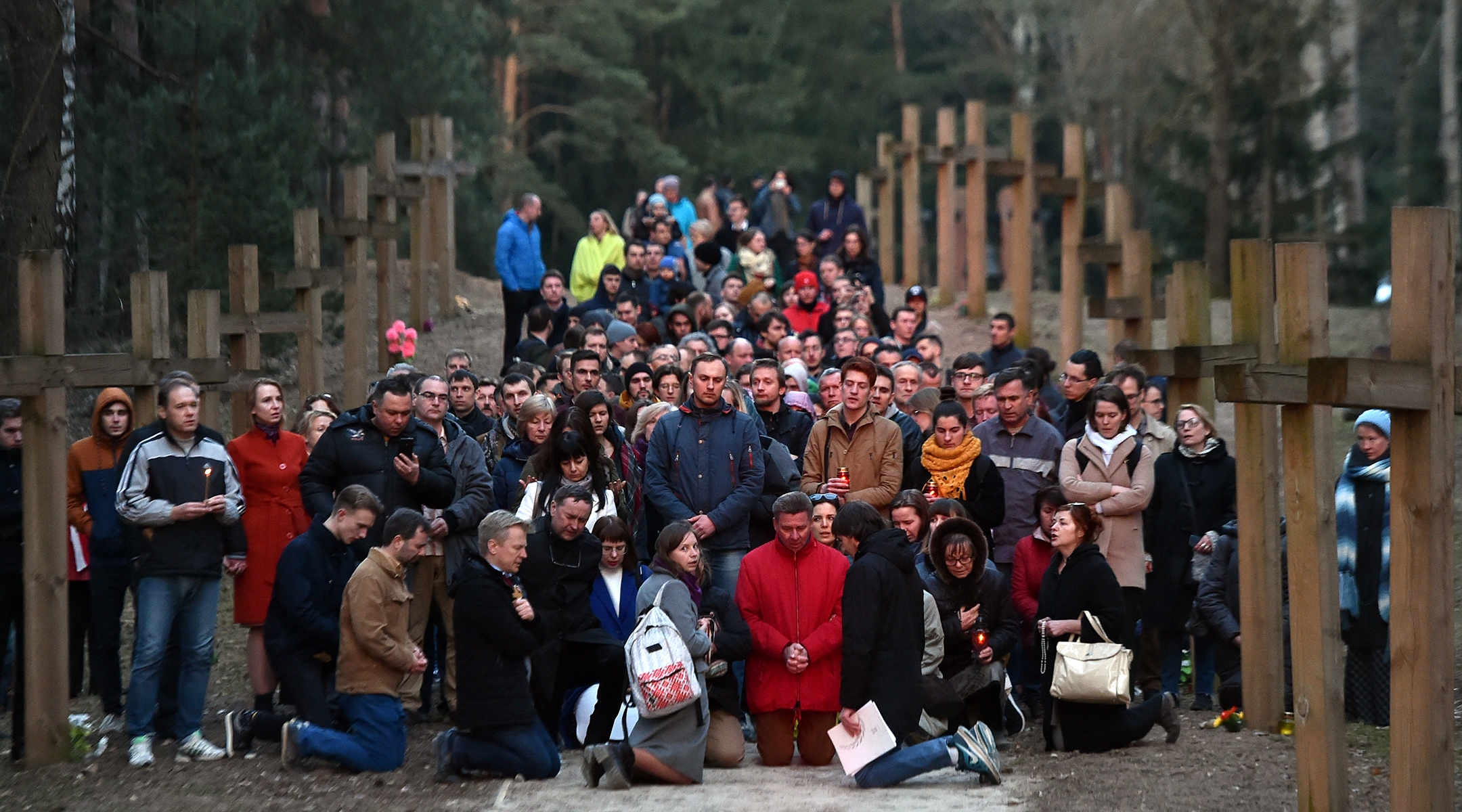 MINSK, Belarus (JTA) — The new roadside restaurant near gas station No. 65 here looks more like an army base than a fancy eatery.

Surrounded by a tall fence with surveillance cameras, its only gate has two uniformed guards. They interview and then keep a watchful eye on drivers who enter the large parking lot of “Let’s Go Eat,” the cheerfully named restaurant that opened last year.

These are just some of the precautions taken by the Jewish owners of this restaurant and amusement complex amid violent protests and anti-Semitic rhetoric over their business’ proximity to Kuropaty Forest, a 1930s killing site of thousands of suspected opponents of Joseph Stalin.

The fact that some of the owners are Jews has complicated a conflict that is shaping up to be a major challenge to this nation’s authoritarian government led by President Alexander Lukashenko, who is often called Europe’s last dictator.

Several Jewish businessmen were involved when the complex opened last June. Nearby were the graves of as many as 250,000 victims of Stalin’s purges against perceived traitors in the 1930s and ’40s, when the Soviet Union ruled over what is now Belarus.

As protests mounted over the location, the entrepreneurs — Arkady Izrailevich, Leonid Zaides, Alina Suris and Leon Sagalchik, among others – dismissed the criticism, saying the land was cleared for construction by the government and that the project was not disrespectful to the victims.

Against this backdrop, the restaurant at Kuropaty is making local Jews uncomfortable in various ways.

“I think it’s not right,” Lena Gourian, a Jewish high-tech professional, told the Jewish Telegraphic Agency earlier this month at a conference on Jewish learning. “Especially Jews should be more careful about building on cemeteries.”

And Maxim Yudin, a human resources professional who volunteers with his Jewish community in Minsk, said: “As a Jew, I’m not comfortable with this restaurant.”

Exacerbating the discomfort of some local Jews is how unrest over the restaurant has injected anti-Semitic rhetoric in a country where it is highly unusual.

It has occurred mostly online following an article by Dennis Ivashin, a nationalist journalist, according to Samuel Barnai, an Israeli scholar.

“The article named Jewish entrepreneurs involved in the project” and ignored the non-Jewish ones, said Barnai, co-author of the 2018 report on anti-Semitism for Tel Aviv University’s Kantor Center for the Study of Contemporary European Jewry.

It noted that a Jewish investor, Suris, was a citizen of Israel as well as Belarus. Another associate, Sagalchik, was pictured in the article with a kippah, which he does not normally wear.

The restaurant “became the convergence point of common interests, forces and resources of large owners,” Ivashin wrote, calling it a “scheme” that results in the “destruction of sacred places and open mockery of the hundreds of thousands of victims on Belarusian land.”

Subsequent articles used terms like “international businessmen” that Barnai said “serve as codes, a dog whistle, that you don’t see often in Belarus.”

Some of the anti-Semitic rhetoric plays on the common perception in Eastern Europe that Jews are responsible for communism and its crimes, like the ones committed at Kuropaty. But “most of it focuses on Jews and money and influence,” Barnai told JTA.

The protest spread and spawned unauthorized daily rallies outside the restaurant – another highly unusual development in a country that is ranked lower than Russia in Freedom House’s Freedom Index. Activists from nationalist groups reportedly came to blows in August with Izrailevich, who has defended the owners’ positions in the media.

“I was shocked at how developed is the domestic anti-Semitism that I encountered on social networks,” he told Bel Gazeta in August, adding that it reminded him of “insane anti-Semitism” during Soviet times.

The restaurant’s perimeter fence runs approximately 50 yards from the edge of the Kuropaty Forest, where wooden crosses stand in the shadow of hundreds of pine trees. The spires of the restaurant’s castle-themed amusement facility for children can be seen from the crosses commemorating victims who were shot and buried here without trial by Stalin’s dreaded NKVD security police. 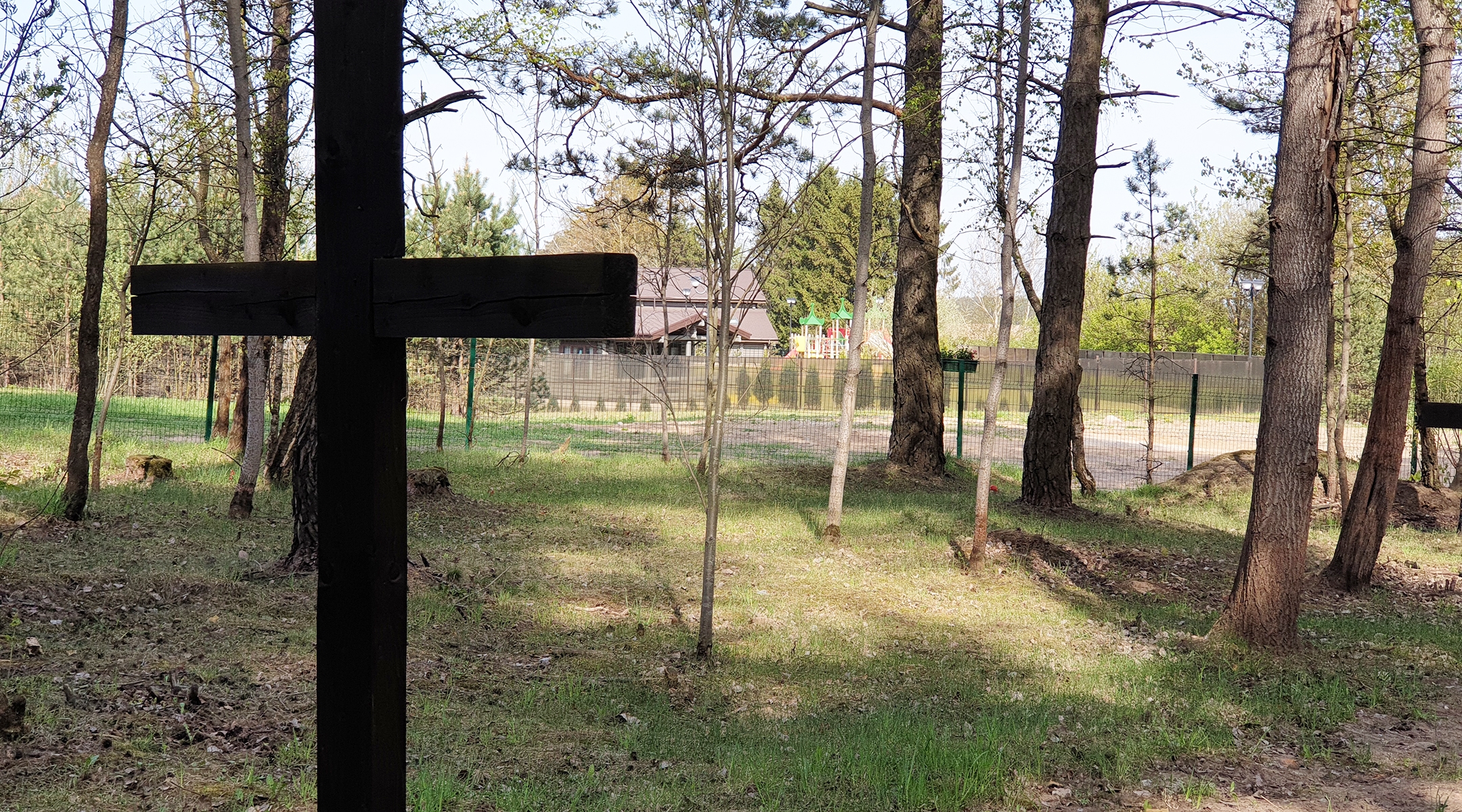 At the Kuropaty execution site, the children’s amusement park of a restaurant built in 2018 can be seen from the wooden crosses marking the graves of  the victims of Stalinism. (Cnaan Liphshiz)

Dozens of the victims’ descendants lay flowers here each Sunday. They are surrounded by the sounds of music and laughter of children from the nearby roadside entertainment complex.

Echoing defenders of Jewish burial sites, critics of the restaurant say it is likely built on some of the unmarked graves of the victims. But even if no victims were buried where the restaurant now stands, the critics argue, human remains surely ended up there in the past 80 years because it is downhill from the forest.

Regardless of where the bodies lie, though, the dispute around Kuropaty has become a test for the stability of the Lukashenko regime, Barnai suggested.

Last month, authorities razed another 70 crosses from the forest, possibly in retaliation for the protests. This month, Lukashenko offered to build a museum for the victims near the forest, perhaps offering a proverbial carrot.

“Maybe Lukashenko would like to back down, but now it has gone too far and it may look like weakness,” Barnai said.

Zaides, a co-owner of the restaurant, said last year that he offered to build a memorial corner for the victims and accept certain restrictions on activities in the complex. But the protesters would not compromise, leading to a breakdown in talks.

“Nobody in the world negotiates with blackmailers,” Zaides told reporters at a news conference in July.

The conflict is being watched closely abroad.

Russian and pro-Russian nationalists are citing the anti-Semitic rhetoric in Belarus about Kuropaty to justify negative stereotypes about Belarusians being racist, Barnai said. And that instrumentalization of anti-Semitism is doubly worrying to local Jews, he added.

But it is the level of unrest produced by the affair locally that is the story’s most remarkable aspect. 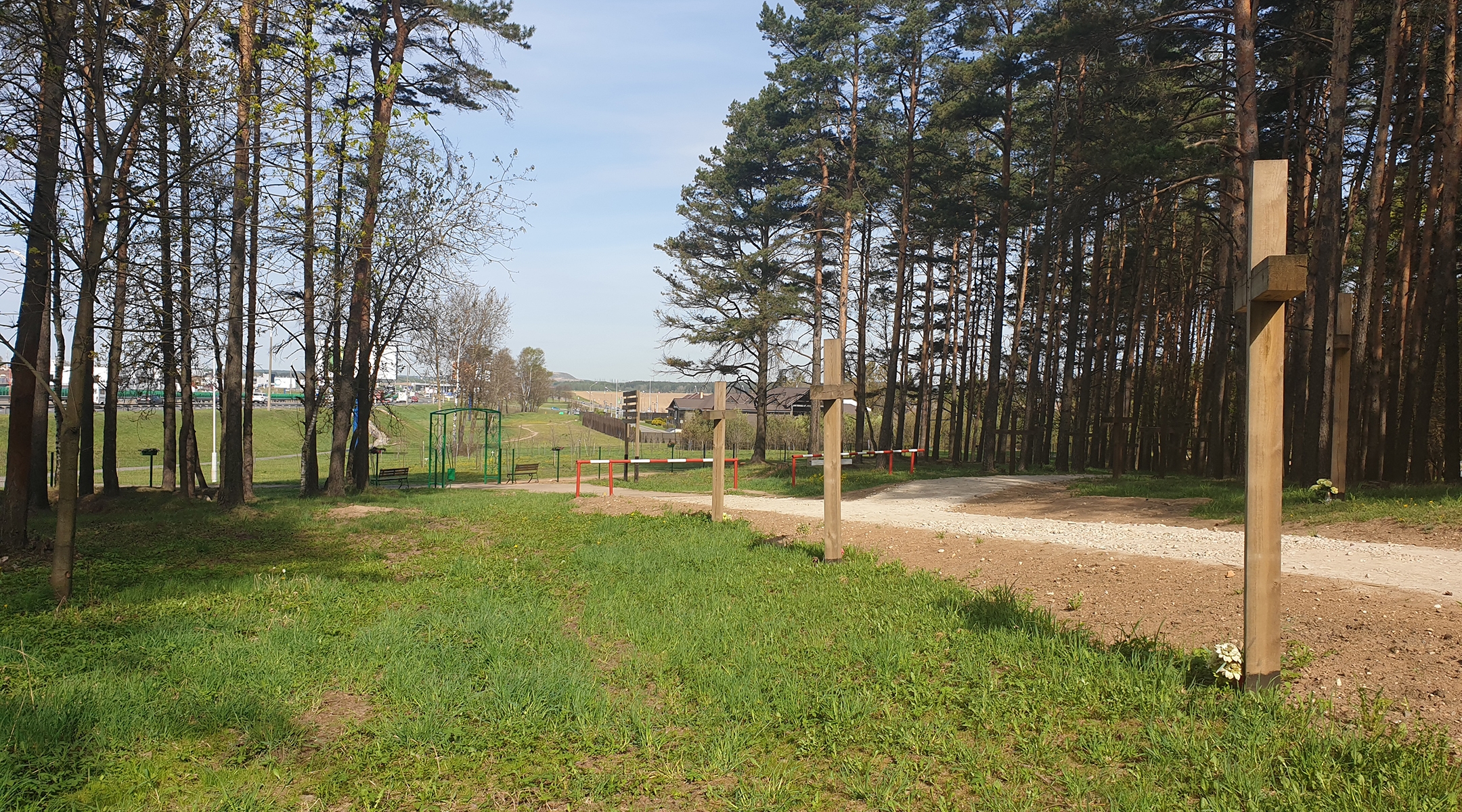 The main avenue at the Kuropaty execution site now ends in a restaurant built in 2018 by Jewish entrepreneurs. (Cnaan Liphshiz)

Common in neighboring Ukraine, unauthorized protests featuring violence are extremely rare in Belarus. Expressions of anti-Semitism are unusual and swiftly punished by an effective police force.

Many of the approximately 20,000 Jews in Belarus say they prefer this authoritarianism, with its iron grip on ultranationalists, racists and petty criminals, to the relative chaos in Ukraine, which in 2017 reportedly had more anti-Semitic incidents than the rest of the former Soviet Union combined.

Under Lukashenko, Jewish businesspeople like Izrailevich and Zaides – who are among the country’s 100 richest people – have thrived. Less affluent members of this nation’s highly skilled Jewish minority also have benefited from the Lukashenko regime’s investment in high-tech, among other policies.

But it has resulted in massive gaps in income between city dwellers in places like Minsk – a modern, clean and manicured metropolitan – and villages lacking infrastructure, with collapsing structures and Third World conditions.

The ability of businesspeople like Izrailevich and Zaides to obtain permits to build so near a national monument is seen by critics as evidence of corruption at worst or injustice at best.

Ivashin, the nationalist journalist, wrote that the story is emblematic of a “lingering disease of the Belarusian society.”