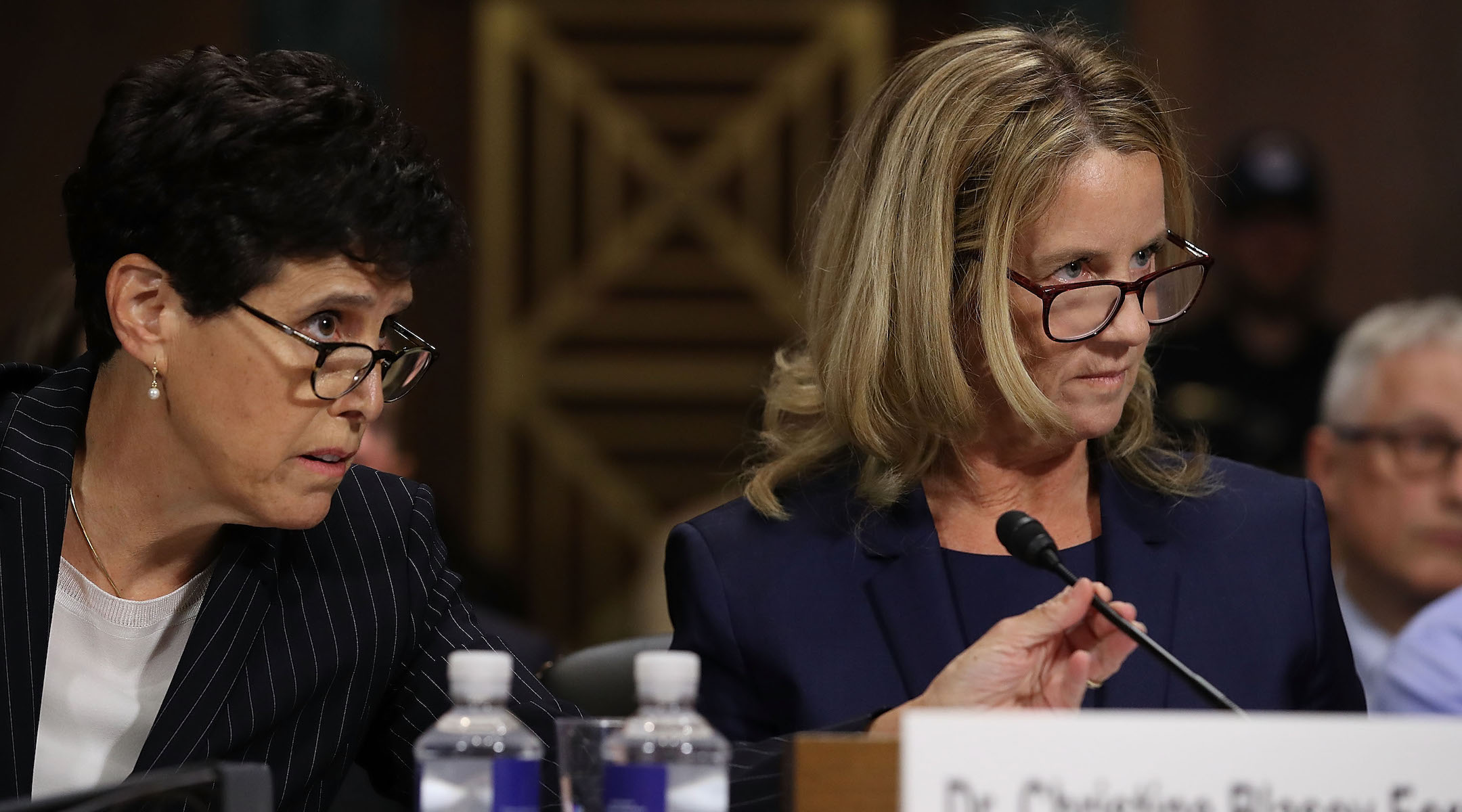 (JTA) — Fighting for the underdog has been a passion for Debra Katz for as long as she can remember.

Years before she would go on to win awards for her work as a civil rights attorney and represent Christine Blasey Ford in one of the nation’s most high-profile sexual assault allegations, Katz stood up for a different kind of victim.

“If there was a kid on the bus who was being bullied, I was the person who stood up for that kid,” she recalled in a phone interview with the Jewish Telegraphic Agency last week. “If somebody had their baseball cards taken, I was the one who demanded that the bully return them.”

Katz, 60, also knew she wanted to be a lawyer from a young age, but it was a case early in her career that narrowed her focus.

In the early 1980s, after graduating from the University of Wisconsin Law School, Katz landed a fellowship that allowed her to work on the landmark case Meritor Savings Bank v. Vinson, in which a bank teller named Mechelle Vinson alleged harassment at work. The case advanced to the U.S. Supreme Court and led to the justices ruling to recognize sexual harassment as a category of workplace discrimination.

Since then, Katz has become one of the top lawyers of the #MeToo movement. Last year she represented Blasey Ford, the woman who accused Supreme Court Justice Brett Kavanaugh, then a nominee, of assaulting her when they were teens. The Jewish lawyer, who sat next to Blasey Ford during her testimony before the Senate Judiciary Committee, describes it as “one of the greatest professional honors I’ve ever had.”

Her work with Blasey Ford and a range of other cases related to the #MeToo movement — she represented Irwin Reiter, who says he objected to Harvey Weinstein’s treatment of an assistant, and Chloe Caras, who accused celebrity chef Mike Isabella of harassment — propelled her name further into the mainstream.

“I’ve worked really, really hard on behalf of people for decades to try to get justice,” Katz said, “and it does feels like this is a time we can accomplish more and it’s very gratifying. It also creates a sense of urgency with our work, where we feel that the world is looking.”

Katz, a founding partner of the Washington, D.C.-based firm Katz, Marshall & Banks, LLP., will be honored Wednesday by T’ruah: The Rabbinic Call for Human Rights with its Raphael Lemkin Human Rights Award.

“Debra Katz brings to life the Torah’s insistence that every person is a creation in the image of God, and deserves to be treated with utmost dignity,” T’ruah’s executive director, Rabbi Jill Jacobs, told JTA in an email. “She has courageously lived out these values in defending women survivors of harassment and assault by powerful men.”

Jacobs also referred to Katz’s work on behalf of a woman accusing Jewish philanthropist Michael Steinhardt of sexual harassment. The megadonor and co-founder of Birthright Israel was accused earlier this year by seven women of propositioning them and making inappropriate remarks in professional settings. (Steinhardt, 78, has admitted to “boorish, disrespectful and just plain dumb” behavior, but he denies harassment.)

Katz represented Sheila Katz (no relation) in her complaint about Steinhardt relating to her work at Hillel International. A Hillel investigation into the allegations concluded that Steinhardt had harassed Sheila Katz and another woman.

As part of the investigation, Hillel decided not to accept a $50,000 donation from Steinhardt and removed his name from its board of governors. Sheila Katz has called on the Jewish community to take seriously such complaints as they happen.

The attorney echoed her client’s demand.

“It is important for the Jewish community to have a reckoning like every other community,” she said, “to ask the question of why he was permitted to behave like this and why did individuals who know better enable the behavior or excuse the behavior.”

Katz, who grew up in a Reform Jewish family in Woodmere, on New York’s Long Island, credits Judaism with her passion for helping people who have been victimized.

“It’s hard to describe this in any other way,” she said, “but those were values as a Jew that I was raised with, that we were strangers in a strange land, and we protect the strangers, and that has always been the guiding principle for me.”

That attitude has made Katz respected — and feared. The Washington Post has described her as “the feared attorney of the #MeToo moment.” In 2007, she was named one of the country’s “Top 10 Plaintiffs’ Attorneys to Fear the Most” by Human Resource Executive Magazine.

“I think it means that when we show up in cases, corporations know that we’ve vetted the cases carefully, the cases are strong, and we’re going to fight like hell for our clients,” she said.

As Katz gained prominence representing Blasey Ford, she faced scrutiny from the right, which accused her of being a Democratic operative. And for the first time in her 35 years of being a lawyer, she faced anti-Semitic death threats. They forced Katz to have security at her home and office.

“All the threats began with ‘you’re a Jew,’” she said.

Her face appeared on anti-Semitic fliers on a number of college campuses blaming Jews for the allegations against Kavanaugh — he also denies them. Also, Katz says the FBI told her that her photo was among a number of images that appeared on the van of the man who sent explosive devices to CNN, Barack Obama, Hillary Clinton, George Soros and others.

The experience was “horrible and scary,” Katz said, as was the thought that “anti-Semitism is such a powerful force in the country right now, and I’m in the scope.”

Outside of work, Katz enjoys hiking. She lives on a farm in a small town in Maryland with her wife and 17-year-old son, whose hobby of raising chickens recently caught the attention of Martha Stewart.

Katz also has a home in Takoma Park, Maryland, and belongs to Am Kolel, a Jewish Renewal community in Beallsville. She also attends synagogues in Washington, D.C., including the Conservative Adas Israel and the nondenominational Sixth & I.

Despite recent progress, Katz says there is plenty of work to be done in terms of fighting sexual harassment and assault. She sees a tension between the increased willingness of the public to take seriously allegations and the policies of the Trump administration to curtail women’s and reproductive rights.

“Both things are going on at once,” she said, “and it will be nice when those things converge, when we actually have an administration that cares about and is receptive to these issues and a society that is looking.”