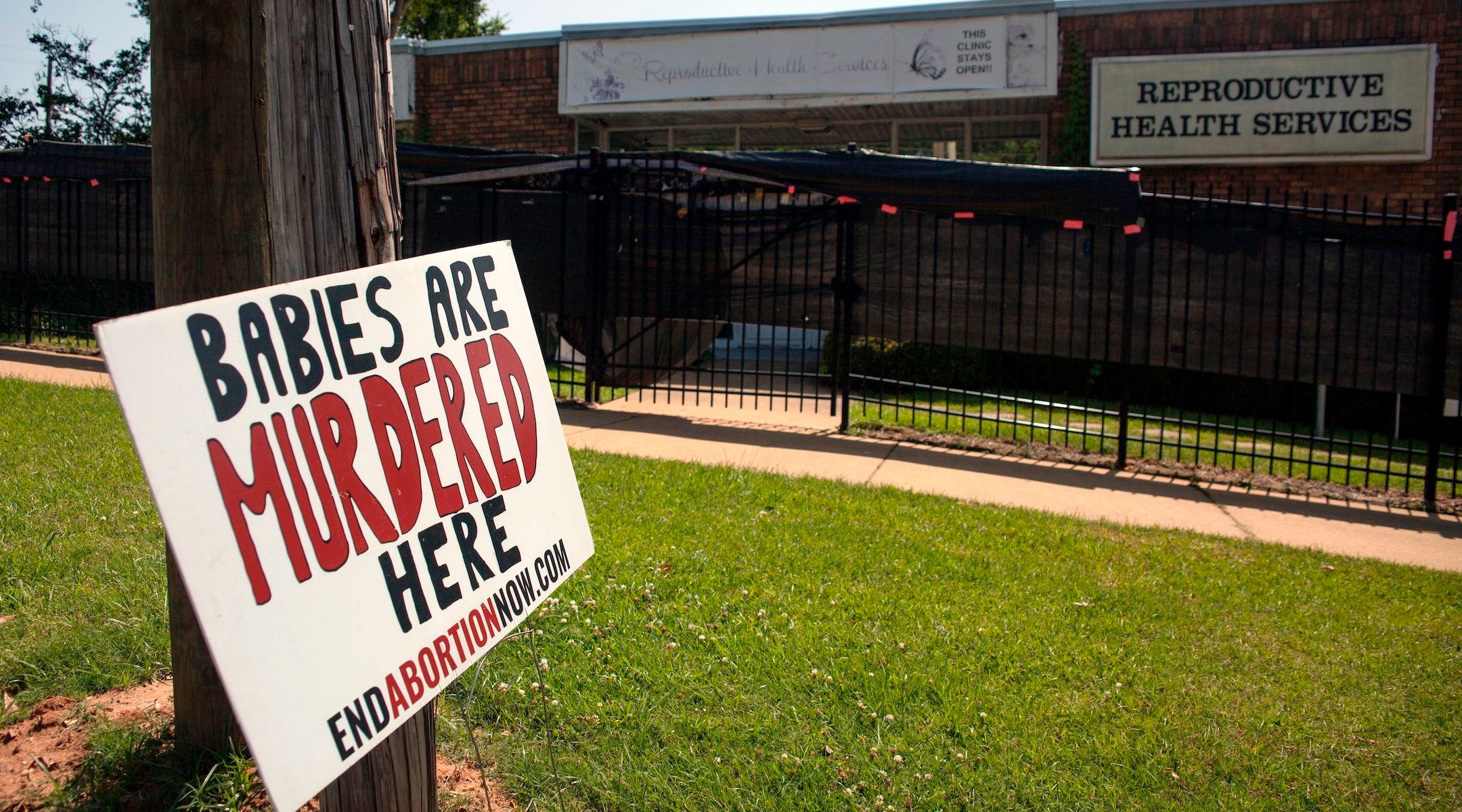 An anti-abortion sign is placed outside the Reproductive Health Services building in Montgomery, Ala., where Diane Weil volunteers, May 20, 2019. (Seth Herald/AFP/Getty Images)
Advertisement

(JTA) — Early on Friday mornings, Diane Weil leaves her house in Montgomery, Alabama, with an umbrella. The 64-year-old registered nurse doesn’t need it to shield her from the rain. Instead she uses it to block patients from protesters who come to the health clinic where she has been volunteering every week since September.

Reproductive Health Services is the only clinic in the city and one of three in the state that performs abortions. Weil escorts patients who come from around Alabama and nearby states on Fridays, the day when procedures are done.

Weil and a group of approximately 10 volunteers use the umbrellas and play music in order to shield the women from roughly the same number of protesters who arrive every week, often yelling at the women as they arrive. Protesters also set up a a van near the clinic offering ultrasounds in an attempt to dissuade women from entering the clinic and terminating their pregnancies.

“They’re hateful,” Weil told the Jewish Telegraphic Agency in a phone interview Tuesday. “One of the things that I remember, the first Friday after January 1st, I was there and they were screaming, ‘Don’t be the first one to murder your baby this year.’”

Last week, Alabama’s governor signed into law a near-total ban on abortion. The law, which goes into effect in six months, bans abortion in all cases except to prevent serious health risk to the mother. It sets up a challenge to Roe v. Wade, the 1973 landmark case that guarantees a woman’s right to an abortion until the end of the second trimester. (Due to the federal legislation, the Alabama law — along with stringent abortion laws recently enacted in other states — will almost surely be held up in court.)

Weil, who works at an HIV clinic, said her reaction to the new law was one of “horror and disgust.”

“It’s so disappointing and heartbreaking, as well as being horrified that people want to control others, not allow others to do things. It’s none of their business,” she said. 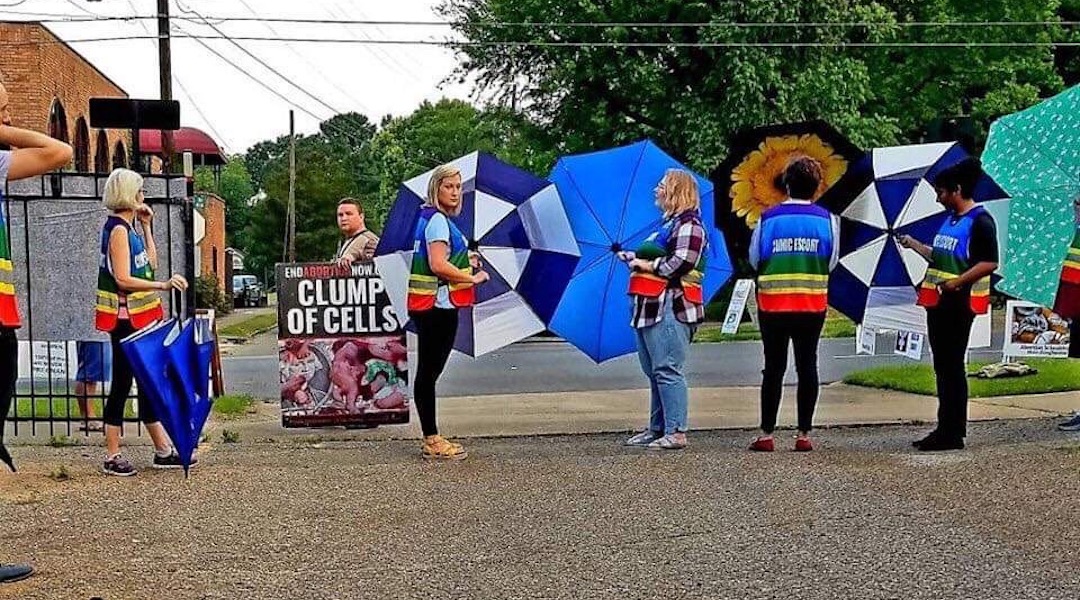 Diane Weil, far left, volunteers at a clinic escort every Friday in Montgomery. (Courtesy of Weil)

Like many Jews in the state, Weil is politically liberal. Last year she volunteered for the campaign of Rep. Doug Jones, the Democrat who narrowly won a Senate election over Republican Roy Moore. Her rabbi, Scott Looper, who leads Temple Beth Or in Montgomery, says members of the 140-family strong Reform congregation have expressed their distress about the law.

“The people who have spoken to me have expressed utter disgust that it’s taking place,” he said.

The rabbi attended a rally against the measure on Sunday at the State Capitol in Montgomery and sent a letter voicing his opposition to Gov. Kay Ivey, the Republican who signed it into law last week.

Ivey, a member of Montgomery’s First Baptist Church, invoked her own religious beliefs in explaining her decision on Twitter to sign the legislation.

A number of national Jewish organizations, including the Jewish Council for Public Affairs, the Conservative movement’s Rabbinical Assembly, the Reform movement’s Central Conference of American Rabbis, Jewish Women International and the Jewish Democratic Council of America have condemned the law.

The Anti-Defamation League decried the bill prior to its passage for language comparing abortion to the Holocaust.

A. Eric Johnston, an attorney who  heads the state’s Pro-Life Coalition and authored both bills, defended the comparison.

“Nobody has a corner on being offended just because their people were killed,” Johnston told CBS News. “It’s offensive to say that [this bill] is offensive.”

Hadassah said it mobilized its 300,000 members and supporters to participate in nationwide #StopTheBans protests on Tuesday against abortion restrictions. The National Council of Jewish Women also joined the rallies.

“NCJW is committed to fighting for every person’s right to control their own body and to make their own moral and faith-informed decisions about their family and future,” NCJW’s legislative associate, Shannon Russell, said in a statement to JTA.

Alabama’s largest synagogue, Temple Emanu-El, is located in Birmingham, where the majority of the state’s approximately 10,000 Jews live. The synagogue counts around 600 families and most are progressive, especially on social issues, according to Cantor Jessica Roskin.

“We as Reform Jews believe very strongly in the concept of social justice,” Roskin told JTA. “I think what people get so confused [about] is this really to us isn’t a political issue, it’s a human issue. This is about human beings and their bodies and their privacy.”

Weil, too, referenced her Reform Jewish identity in explaining why the issue matters to her.

“I feel pretty strongly that Reform Judaism has tremendously informed how I feel, probably about a lot of things, but definitely social justice issues and things like right to abortion,” she said.

On Friday, she will again head to the clinic. Usually Weil is one of about 10 volunteers, but last week there were several new people, she said.

The new law, she said, “has woken people up.”

Weil said volunteering at the clinic gives her “immediate gratification.”

“I feel really good about being there, as twisted as that may sound,” she said. “It is one of the highlights of my week to be there for those women.”