What is anti-Semitism? The question divides a Jewish coalition. 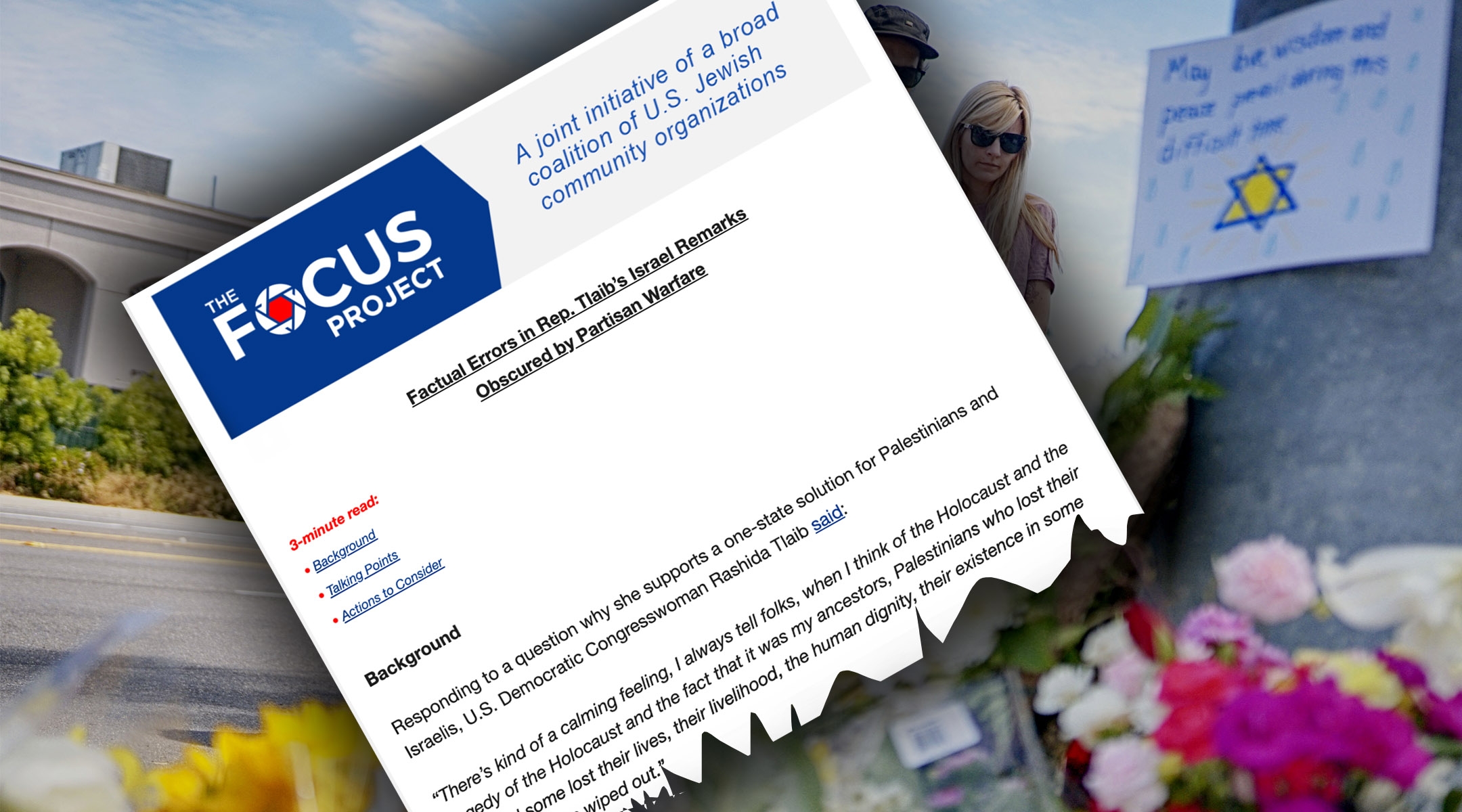 The Focus Project was launched in 2017 to provide "weekly talking points on timely issues regarding anti-Semitism and de-legitimization of Israel." (Getty Images/JTA Montage)
Advertisement

NEW YORK (JTA) — Launched in 2017, a weekly newsletter from a coalition of establishment Jewish and pro-Israel groups has been providing talking points on anti-Semitism and the delegitimization of Israel to a select list of Jewish influentials.

The Focus Project, according to its director of strategic communications, Scott Piro, provides “collective, nonpartisan guidance to members of the community who choose to subscribe to our list,” and that all partner groups have an “equal voice” in shaping the messaging.

Those partner groups are the Conference of Presidents of Major American Jewish Organizations, the Jewish Council for Public Affairs and the Anti-Defamation League — along with StandWithUs and The Israel Project, two groups known for their sharp-elbowed defense of Israel’s government and pushback against Israel’s critics.

Dovid Efune, the editor in chief of The Algemeiner, a Jewish newspaper with an editorial stance generally seen as right of center, has advised the effort in a personal capacity, according to Piro.

But the newsletter’s language recently led the Jewish Council for Public Affairs, or JCPA, an umbrella group of local Jewish public policy organizations, to remove its name from the newsletter’s masthead, the Jewish Telegraphic Agency has learned from sources familiar with the matter.

JTA also learned from multiple sources that the decision, made in April, followed an internal conversation among JCPA leadership and a number of Jewish community relations professionals under the JCPA umbrella.

The decision reflected the discomfort of professionals who felt that the newsletter focused more on pro-Israel advocacy than anti-Semitism, and was too quick to call anti-Israel activity anti-Semitic.

The trigger for that conversation was a Focus newsletter on April 16 that called Airbnb’s scrapped boycott of Israeli settlements “antisemitic.” Professionals also felt that the newsletter was speaking in JCPA’s name, but not with its preferred tone or phrasing.

The JCPA, which advocates a two-state solution and mostly liberal positions on a range of domestic issues, seeks to build broad-based political and religious coalitions against efforts to boycott Israel.

Ben Friedman, the director of the Jewish Community Relations Council in Orlando, Florida, is one of multiple directors of JCRCs who feel the newsletter is focused on the left. He said he inquired about the newsletter independently of other directors.

“The Focus Project tends to focus on, really almost exclusively, anti-Israel and anti-Semitic incidents that are of left-leaning origin,” said Friedman, speaking for himself. “I think that’s a fair criticism.”

A JTA examination of all 63 newsletters that have gone out since mid-March 2018 found that about two-thirds focused on anti-Israel activity. The newsletters focused on anti-Semitism cited examples from both ends of the political spectrum, but significantly more often focused on left-wing examples, even at a time when one of its partners, the ADL, has been noting the rise of the kind of white nationalist extremism that led to deadly shootings at synagogues in Pittsburgh and near San Diego.

None of the Focus Project’s partner organizations agreed to speak on the record with the Jewish Telegraphic Agency for this article. A few did not respond to multiple requests for comment made over the course of a week, including the ADL and Malcolm Hoenlein, the Presidents Conference’s executive vice chairman.

Piro, the initiative’s lead employee, provided brief responses to questions sent by email, and wrote that they were in the name of all of the initiative’s partner organizations. The initiative has no website or social media presence.

“The Focus Project develops and distributes weekly talking points on timely issues regarding anti-Semitism and de-legitimization of Israel,” Piro wrote to JTA in an email last year. “You should consider them a consensus view across an extensive spectrum of America’s Jewish community. We’ve covered Farrakhan … and the alt-Right.” (The ellipsis was in the original.)

Louis Farrakhan, the leader of the Nation of Islam, has often promoted anti-Semitism. Although he also holds anti-feminist and homophobic views, his most prominent supporters are largely on the left. The alt-right emerged in 2016 as purveyors of white nationalism and frequent anti-Semitism.

This week Piro wrote that “[w]e do not aim to reach any one audience, or pursue any one agenda,” and that the newsletter addresses “topical issues that affect us all.” As examples of such issues, Piro cited “the rockets coming from Hamas into Israel, the riots along the Gaza border, antisemitic incidents, etc.”

The newsletter comes as Jewish organizations have been tracking the rise of anti-Semitism on the left and the right.

Several Jewish groups, including the Reform movement’s Religious Action Center, the National Council of Jewish Women and the ADL have testified or lobbied for stricter monitoring and enforcement of white nationalism.

Other groups, like the Zionist Organization of America, and commentators, like the conservative Dennis Prager, insist that the biggest threat is from the “new anti-Semitism,” which they describe as anti-Semitism disguised as anti-Israel activity. They regard the boycott Israel movement and pro-Palestinian activists on college campuses as the vanguard of the new anti-Semitism. The Focus Project newsletter has used the phrase “new anti-Semitism” at least five times.

While Jewish groups tend to say that all forms of anti-Semitism need to be addressed, the national political climate is more polarized. Republicans are eager to call out Democrats on anti-Israel activity, and Democrats are just as eager to point out Republican tolerance for white nationalism.

Background conversations with people familiar with the Focus Project and its documents paint a picture of a project largely focused on tracking anti-Israel activity and offering pro-Israel talking points.

When it does track anti-Semitism, most of the subjects are on the left, although its analysis also strives for bipartisanship.

Three emails since March 2018 focus on U.S. Rep. Ilhan Omar, a Minnesota Democrat, and one focuses on Rep. Rashida Tlaib, a Michigan Democrat — freshman Muslim-American lawmakers and supporters of an Israel boycott who have been accused of trafficking in anti-Semitic tropes. A March 13 newsletter in the wake of widely condemned remarks by Omar urges praise for the Democratic-led House of Representatives for a resolution condemning all forms of hate, but also warns that some elected officials “are making excuses for Rep. Omar or say she didn’t intend her remarks to be antisemitic – a troubling whitewash.” It urged readers to share an “impassioned speech against antisemitism” by Rep. Ted Deutch, a Democrat from Florida.

The Focus email from March 27, 2018, was headlined “America’s Growing Anti-Semitism.” The two examples it gave: a smear about the Rothschilds by Trayon White, a Democratic city councilman in Washington, D.C., and a joke about how Jews are awkward dancers from New York Gov. Andrew Cuomo, also a Democrat.

Two additional links in the email sent readers to articles about anti-Semitism in the Women’s March, and praise of Hitler from R&B singer Erykah Badu.

That same week, and unmentioned in the newsletter, anti-Semitic fliers were found at the University of Minnesota that blamed Sens. Bernie Sanders and Chuck Schumer, both Democrats, for promoting gun control.

One topic the newsletter has not flagged since its launch are the subset of attacks on liberal Jewish financier George Soros by Republican candidates or right-wing activists that critics say end up fueling anti-Semitic conspiracy theories. For example, the newsletter made no mention of when Fox Business Network pulled a broadcast of “Lou Dobbs Tonight” in Oct. 2018 after a guest, Chris Farrell of the conservative group Judicial Watch, referred to the “Soros-occupied State Department.” Nor did the newsletter mention in the same month that an explosive device was placed in a mailbox outside of Soros’ New York home by a Florida man who targeted liberals and Democrats.

While the newsletter has not mentioned any of the anti-Soros examples, one of its backers — the ADL — has spoken out on the issue several times in the past year. Last October, the ADL issued a position paper warning that “politicians and pundits repeating these unsubstantiated conspiracies [about Soros] essentially validate the same hateful myths propagated by anti-Semites.”

The ADL declined repeated requests for comment this month on the Focus Project. Last year it sent a short statement to JTA saying that it had been “invited to help the Focus Project to frame up weekly talking points on issues affecting Israel and the American Jewish community,” and that ADL is “one of a number of organizations contributing to this effort, which is in a pilot phase.”

The ADL itself has been one of the strongest proponents of attacking anti-Semitism on all fronts. In January, ADL released a report showing that “extremist-related murders in 2018 were overwhelmingly linked to right-wing extremists.” In 2018, nearly half the incidents of harassment targeting Jewish institutions “were the work of known white supremacists or extremists,” according to the ADL.

In March, the ADL called on congressional leaders in both parties “to use your positions of leadership to call out and reject any efforts to politicize the fight against anti-Semitism and unite in a bipartisan way to combat anti-Semitism.”

JTA was told by people familiar with the Focus Project that the intended audience for the Focus Project newsletter’s talking points is principally center-left Americans, who may be sympathetic to criticism of Israel, especially from the left. As of March, the newsletter had more than 1,000 recipients, the majority of whom were Jewish or pro-Israel professionals, or rabbis. They range from employees of Jewish federations to campus Hillels to staff at the Jewish fraternity AEPi.

A style guide sent to the initiative’s member groups this year draws on the language of uncritical pro-Israel advocacy. It recommends a range of terms deemed “pro-Jewish, pro-Israel” and that portray Israeli government policy in a favorable light.

Instead of “Israeli settlement,” it says, try to use “Israeli community.” Instead of “occupied territories,” use “jointly-administered territories.” Instead of “Gaza blockade,” use “Gaza security restrictions.” An earlier version suggested using the term “anti-Semitism” instead of “criticism of Israel,” though that was ultimately deleted.

Piro is technically employed by StandWithUs and at times has worked a few days a week from ADL’s Manhattan office.

“We are a very small group that uses borrowed space as available,” Piro wrote in an email to JTA.

Friedman of the Orlando JCRC sees bias in the newsletter, but notes that the partner organizations themselves highlight anti-Semitism across the spectrum. Several Jewish leaders who receive the newsletter told JTA it does not inform their thinking on these issues.