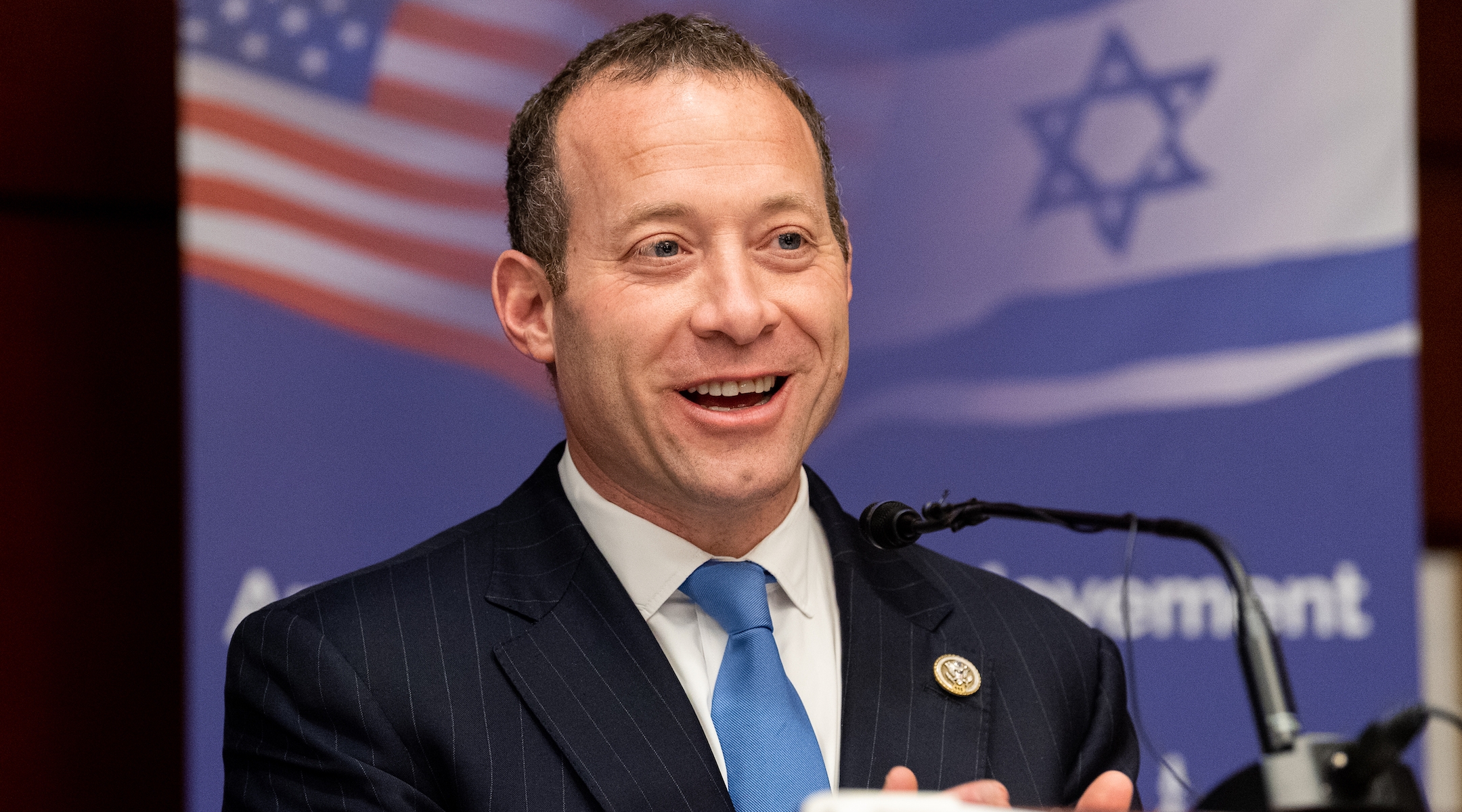 It looks like a yoke, and it can easily turn into one for a congressman who fails to maintain the delicate balance that satisfies its rural western and suburban eastern sectors. That’s what happened in 2016 to longtime incumbent Scott Garrett, a Republican whose old-style conservatism, once seen as a natural fit for the largely rural district, suddenly seemed out of place as gerrymandered suburban Bergen County became more populous and diverse. Garrett’s opposition to LGBTQ rights particularly helped do him in.

Josh Gottheimer, a Democrat and former speechwriter for President Bill Clinton and later a Microsoft executive, defeated Garrett and appears not to be weighed down by the yoke. A map of his district is the first thing you see walking into his Capitol Hill office.

Gottheimer, 44, promotes himself as a torch carrier for bipartisanship in a polarized landscape. In his first term he co-founded the Problem Solvers caucus: 22 Democrats and a like number of Republicans who aimed to change rules that inhibit bipartisanship. Following the 2018 election, in which Gottheimer was re-elected by a substantial margin, he withheld a promise of support for Nancy Pelosi’s bid for House speaker until she agreed to rule changes that would strengthen moderates and marginalize hardcore liberals and conservatives.

Subscribe to Gottheimer’s fundraising emails and you get a taste of his willingness to swing all ways: “Do you want someone who will claw our taxes back?” reads one. Others tout his solutions for climate change and defense of LGBTQ rights.

Gottheimer, who is Jewish, stakes out the right of his party on Israel issues. That and other postures spurred a critical piece in The Intercept, which has become the flagship of the Democratic left. It described him as an ambitious “avenger,” beholden to Wall Street, who is fighting the forces who aim to “push the party in a progressive direction.”

As a “problem solver,” Gottheimer has become something of an expert on parliamentary maneuvers in Congress, and used them in an effort to get an anti-Israel boycott measure attached to a bill that would defund U.S. backing for Saudi Arabia in its war in Yemen.

The Intercept piece depicted Gottheimer as something of a condescending jerk in a meeting he had at the beginning of the new Congress with Rep. Rashida Tlaib, D-Mich., a Palestinian American, where they discussed differences on Israel and the Palestinians. Gottheimer later told Jewish Insider he thought the meeting went well. Rep. Elaine Luria, D-Va., another a “problem solver” and Jewish, supported Gottheimer’s version of the events.

The Intercept kept it up this week with a piece alleging that the lawmaker is an abusive boss. It underscored how Gottheimer has become a target for the left and the right: The Free Beacon, a GOP mouthpiece, gleefully summarized the article under the headline, “Former Staffers Bash ‘Narcissistic, Egotistical Sociopath’ Josh Gottheimer (D).”

I spoke for 30 minutes with Gottheimer in his office. It was a frank exchange, albeit one that started out slightly weird: An aide handed Gottheimer a printout of my last major article on the congressman, when he announced he would back Pelosi, and the first few minutes were taken up with his reading through it, chuckling at times.

He’s happy with the Democrats’ BDS compromise: House Republicans want their chamber to take up a bill that would make it easier for states to penalize entities that participate in the anti-Israel boycott, or BDS. (The Senate has passed the measure.) Some Democrats back the bill, which garnered a majority of Senate Democrats, but some fear it infringes on speech freedoms. The caucus as a whole would prefer it not come to a vote. Instead, three Jewish lawmakers — Reps. Jerry Nadler, D-N.Y., Brad Schneider, D-Ill., and Lee Zeldin, R-N.Y. — are backing a nonbinding resolution that condemns BDS but also upholds speech freedoms.

“Let’s not make light of something I believe is really important: It’s a very important statement that the Congress should come around together and make,” he said. “I think first we have to consider this piece of legislation, and then I’m hopeful we will do more.”

The Senate bill with the anti-BDS measures also includes provisions guaranteeing $38 billion in defense assistance to Israel over the next decade, support for Jordan and sanctions on Syria. Gottheimer suggested he backed Pelosi’s strategy of breaking that bill into its components as a way to advance defense assistance for Israel while separating out the anti-BDS component.

“We’re making sure we live up to our commitments on the MOU,” the $38 billion memorandum of understanding the Obama administration signed with Israel in 2016. “You saw the influence of the Iron Dome just a couple of weeks ago and how many lives were saved.” The defense aid goes in part to the Iron Dome anti-missile defense system, which Israel deployed earlier this month when terrorists fired upwards of 700 rockets at communities there.

But he’s not going to stop voting against BDS: Republicans have used anti-BDS provisions on multiple occasions in an effort to gum up major Democratic initiatives, employing the age-old strategy of attaching an unpalatable rider to a major bill. The Intercept piece cast Gottheimer as disloyal to the left for taking the GOP bait and pushing for an anti-BDS amendment to a bill to end U.S. support for the Saudis in the Yemen war. Top Democrats, among them the most pro-Israel in the caucus, called the Republicans’ bluff and passed the bill anyway. Trump ultimately vetoed it.

“I felt very strongly that I’m not going to vote against an anti-BDS measure,” he said. “I agreed with the measure and the resolution, and I did not believe it would undermine the [Yemen] legislation.”

I pressed the second-term lawmaker: Adding the anti-BDS measure would have, under parliamentary rules too arcane to describe here, buried the Yemen bill. How is that support?

He won’t stop calling out Tlaib and Omar, and Republicans, too: Tlaib and Rep. Ilhan Omar, D-Minn., have become the bugbears of Republicans and pro-Israel Democrats for backing BDS and comments seen as anti-Semitic.

Gottheimer defended taking Tlaib to task for her Israel-related comments, including suggestions that senators who backed the anti-BDS bill “forgot what country they represent.”

“We stand up to historic tropes and to comments we disagree with, and I believe it’s very important to speak out and not be silent in the face of comments,” he said. “I can show you a long list of comments that can be made from people on the other side of the aisle. There’s hate across the spectrum.”

The U.S.-Israel relationship should be untouchable: Tlaib and Omar are “the exception, not the rule” among Democrats, Gottheimer said.

He backs Trump’s Iran policy, and says Trump is not going to war: The Trump administration keeps adding reinforcements in the Persian Gulf, citing what its officials say is increasingly hostile Iranian activity against U.S. and allied interests. But the officials are vague when asked for evidence. Gottheimer, a member of the national security subcommittee of the Financial Services Committee, says he has learned enough through classified briefings to back the Trump administration.

“We need to be tough on Iran. I was against the Iran deal,” he said, referring to the 2015 nuclear deal, which was backed by much of the Democratic Party. “Consistent with what you’ve read about in publications, the administration is not interested in going to war with Iran. I hold them to that, and if they have a change in strategy they would come to Congress for approval.”

He loves political diversity: Gottheimer said working his diverse district is a blast. “I’ve got everything in my district which I love,” he said. “I’ve got farms and cows, and I’ve got Hackensack [the Bergen County hub not too far from his suburban home]. It’s a real microcosm in a lot of ways of a lot of places in” the United States.

AOC is not his enemy: Gottheimer rejects zero-sum politics within the caucus. He said Alexandria Ocasio-Cortez, the firebrand leftist, is good for her Bronx-area district and he is good for his.

He won’t talk impeachment: Pelosi is hanging tough on increasing calls from the caucus to launch impeachment proceedings against Trump for alleged improprieties revealed by special counsel Robert Mueller in his probe of Russian interference in the 2016 elections.

“It’s critically important we have strong oversight and that our committees are able to fulfill our constitutional responsibilities,” he said. Does that mean impeachment? “I think we need to have strong oversight, I’m not going to answer your question,” Gottheimer said.

Fighting anti-Semitism is a priority: Gottheimer is proud of the $1.5 million in nonprofit security grants he has secured for his district. He organized a call earlier this month advising nonprofits on how to apply for the money. Gottheimer, who has a printout ready of his actions to combat anti-Semitism, says it’s critical to stop that scourge and other biases in their tracks.

“The hate, not just anti-Semitism — we’re seeing Islamophobia, we’re seeing white supremacism and other issues,” he said. “We’ve got to make sure our religious institutions and schools are protected.”

The intensity clearly spooks Gottheimer, whose rural supporters in the last election were targeted with swastikas. On Tuesday, the day we talked, a school in his district was daubed with a swastika. He called the superintendent to check in.

“It just feels like there’s so much anger, people are in their microcommunities, people are pretty revved up — it’s contributing. We’re seeing such a significant increase not just around the world, but at home, acts of anti-Semitism,” he said. “This is a significant, significant concern.”