It is dangerous to wear a kippah in Germany, anti-Semitism official says 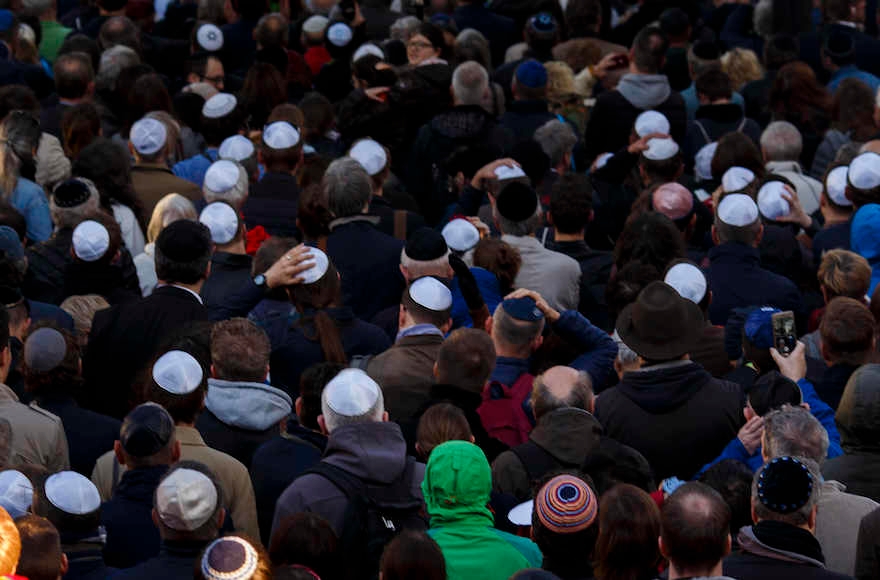 BERLIN (JTA) – It is dangerous to identify publicly as Jewish in Germany, including wearing a kippah, Germany’s commissioner on anti-Semitism said.

In a wide-ranging interview, Felix Klein told the Berliner Morgenpost on May 24 that he could not recommend that Jews wear a kippah everywhere and any time in Germany. He also said public servants must be better educated to combat anti-Semitism.

Recent government statistics show a 20 percent rise in the number of anti-Semitic crimes reported in the past year, with a total of about 1,800 in 2018. The vast majority of crimes for which a perpetrator or motive is known were attributed to the far-right wing.

In the controversial interview published in newspapers of the Funke Media Group, Klein – appointed to his position in the Interior Ministry last year – was asked about the safety of wearing the traditional Jewish head covering.

“My opinion has unfortunately changed on that point,” he answered. “I can’t recommend that Jews can wear a kippah everywhere and any time.  Sad to say.”

He added that it was urgent that the government do a better job of preparing public servants: “There is a clear definition of anti-Semitism [the International Alliance for Holocaust Remembrance definition, which Germany adopted in 2017] and it must be taught in police academies. It also must be included in the training of teachers and lawyers.”

The comments have prompted numerous strong reactions from Jews here, including rabbis who always wear a head-covering.

“Klein’s intentions are good, but we know that hiding our identity was never the solution,” Yehuda Teichtal, a Berlin community rabbi and head of the city’s Jüdisches Bildungszentrum Chabad Lubawitsch, told the Jewish Telegraphic Agency in a telephone interview.

“Of course we have to take security precautions, use our heads and not walk into a place” that could be dangerous, added Teichtal, who in 2017 did a “kippah walk” through the city’s Kreuzberg neighborhood, a district with a large Muslim population.

Klein’s advice is “coming from a very, very strong place of honesty. And in the next sentence he immediately advises what should be done about it,” said Josh Spinner, Berlin-Based CEO of the Ronald Lauder Foundation, in a telephone interview with the Jewish Telegraphic Agency.

An observant Jew, Spinner has worn a baseball cap instead of a kippah when on the street, for years.

“Of course anti-Semitism has increased,” he noted, adding that it is not due to one factor alone, but to a combination.

Klein’s comments also prompted a counter statement by Bavarian Minister of the Interior Joachim Herrmann, of the conservative Christian Social Union party. “Everyone can and should wear a kippah, wherever and whenever he wants to,” Herrmann said on Saturday, adding: “If we give in to hatred of the Jews, we leave the field to right-wing ideas.

“While it is possible generally to wear a kippah in public in Germany without harm, it has long been the sad truth that safety is unpredictable.  There are certain areas where there is a higher risk of animosity but verbal assaults and threats can come anywhere, including in middle-class residential neighborhoods,” Deidre Berger, longtime director of the American Jewish Committee office in Berlin, told JTA.

“This has been going on for years, as we know from polls and criminal statistics, without a strong public response.   Therefore, it is of utmost importance that this problem has been recognized and identified by Germany’s top coordinator of anti-Semitism affairs. It is unthinkable that Germany would be a country where Jews worry about wearing a kippah,” she said.

Klein’s suggestion that Jews not wear kippahs in public “shocked me deeply,” Israeli President Reuven Rivlin said in a statement.

“Responsibility for the welfare, the freedom and the right to religious belief of every member of the German Jewish community is in the hands of the German government and its law enforcement agencies. We acknowledge and appreciate the moral position of the German government, and its commitment to the Jewish community that lives there, but fears about the security of German Jews are a capitulation to anti-Semitism and an admittance that, again, Jews are not safe on German soil,” Rivlin said, adding: “We will never submit, will never lower our gaze and will never react to anti-Semitism with defeatism – and expect and demand our allies act in the same way.”

The question of whether it is safe to wear a kippah in public in Europe has come up periodically in recent years. Journalists and rabbis have walked the streets of Berlin, Paris and other cities to test the waters.

Most recently, Sigmount Königsberg, representative on anti-Semitism for the Jewish Community of Berlin, walked through Kreuzberg wearing a kippah, as he spoke with Antonia Yamin of Israel’s KAN broadcasting company.

“Unfortunately, we cannot say that Jews are safe and secure in all parts of Germany, especially if they are wearing a kippah,” Königsberg told Yamin. “We must fight all forms of anti-Semitism… and not get dragged into a discussion about which is more dangerous, the Muslim or the right wing,” he said.

“My goal is to make my own job obsolete,” he added.