13 Democratic candidates delivered videos to this Jewish conference. The different messages hint at what’s to come. 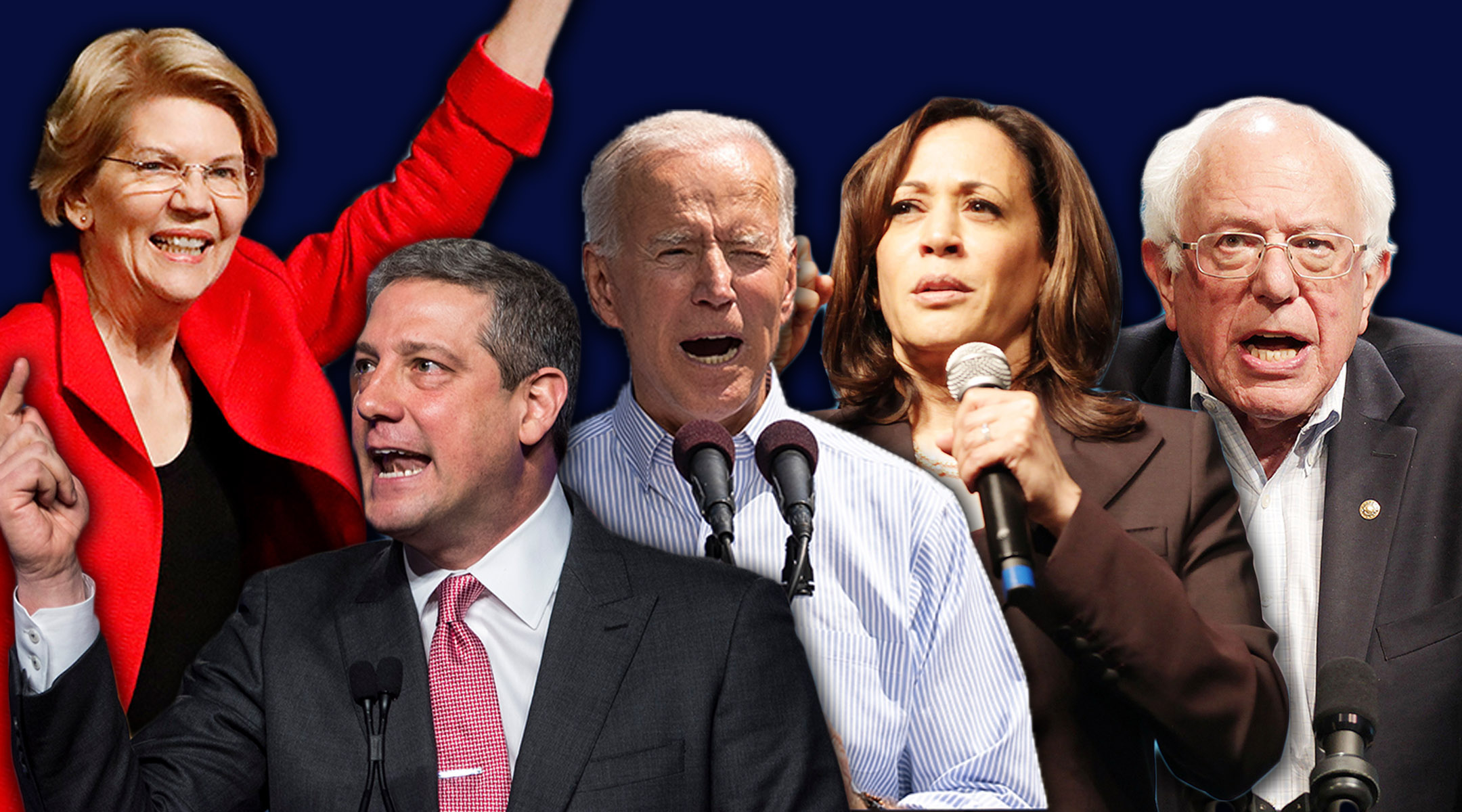 WASHINGTON (JTA) — Everyone started by praising the American Jewish Committee, naturally enough. But in their video greetings to the group’s annual policy forum here, 13 Democratic candidates proceeded to demonstrate a party grappling with what story they should tell to one of its most important demographics: Jewish voters.

Some candidates started by decrying anti-Semitism. Others started by holding up the U.S.-Israel relationship. A couple didn’t mention Israel at all. Some remarks lasted under a minute, one went over six minutes.

Then there were the backgrounds, from the Capitol to a hotel room interior to what appeared to be the exterior of a shipping container. Frontrunner Bernie Sanders, the Independent from Vermont, posed in front of a poster touting the band the Red Hot Chili Peppers. 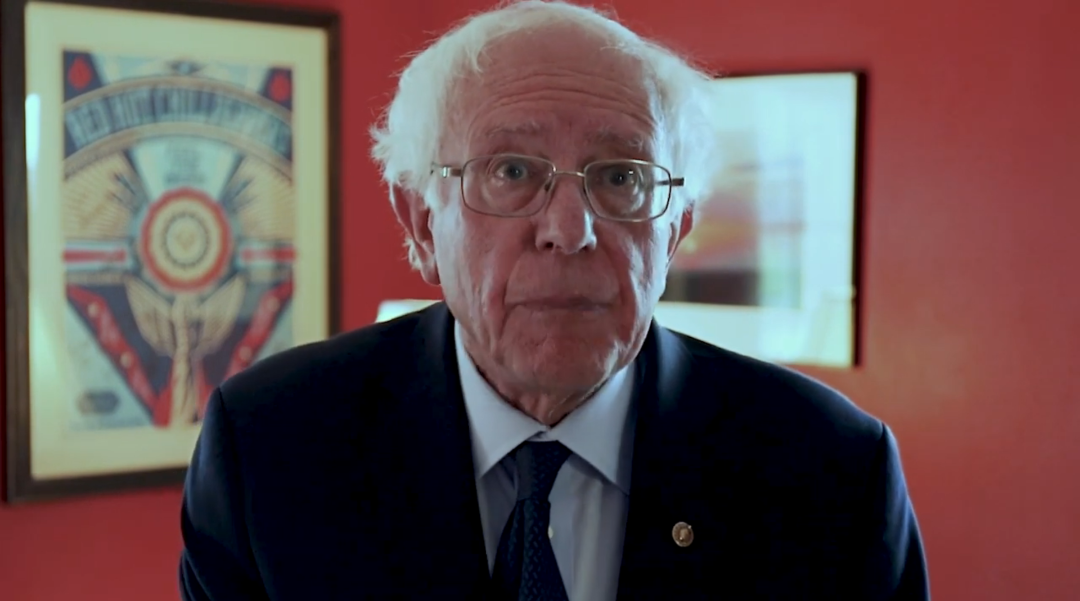 Sen. Bernie Sanders appears in a video addressed to the American Jewish Committee. The AJC solicited videos from presidential candidates ahead of its annual conference in Washington, D.C., from June 2-4, 2019. (Screenshot from YouTube)

Taken together, the 13 videos show a field of Democratic presidential candidates united in a determination to combat right-wing extremism, but divided in their interpretations of the U.S.-Israel alliance.

The AJC invited most of the 24 declared candidates to contribute a video and 13 complied; longshots like Marianne Williamson, a Jewish self-care counselor and author, or Wayne Messam, the mayor of Miramar, Florida, were not invited. Candidates who are leading in the polls or who have had longstanding relations with the group had their videos streamed during plenaries. People attending the conference and others streaming online were directed to AJC’s YouTube channel to watch all 13.

AJC asked President Donald Trump to contribute a video. He did not. His Secretary of State, Mike Pompeo, prerecorded an interview with AJC CEO David Harris, but spoke mostly about foreign policy, and did not campaign for his boss.

Here’s what the candidates shared and how they differed:

The rise of the extreme right

Every one of the 13 candidates noted the rise of the extreme right and at least alluded to the two deadly attacks since October on synagogues, in Pittsburgh and in Poway, near San Diego.

Some spoke of the threat in general, almost vague terms as if it were a deadly version of whack-a-mole.

“We’ve got a lot of issues that we need to work on in this country, combating anti-Semitism here in the United States and abroad,” Ryan said. “We’re seeing it pop up periodically all over in communities around the United States.”

Others spoke in personal terms. Inslee recalled attending a memorial service after the Pittsburgh attack at a synagogue in his home state, and Sanders describing his meeting with the Tree of Life rabbi. Gabbard devoted a chunk of her video to describing the discrimination she has faced as a Hindu American — in particular, in the form of biased expressions from Republicans in her home state.

Harris, whose husband is Jewish husband and who has adult Jewish stepchildren, brought it home with an image that parents could identify with: “No one should have to worry about their children’s safety when they drop them off at the JCC,” she said.

Biden and Sanders, leading in the polls, named Trump as a factor in spurring bias. Biden noted Trump’s equivocation following the deadly neo-Nazi riot in Charlottesville, Virginia, in 2017, echoing his attack on the president in the video he released in April launching his campaign.

“We are in a battle for the soul of our nation,” he said.

Sanders, as he has done in the past, identified Trump with rising authoritarianism worldwide.

“We see political leaders who exploit people’s fears by amplifying resentments stoking intolerance and fanning ethnic and racial hatreds among those who are struggling,” Sanders said. “We see this very clearly in our own country it is coming from the highest level of our government.”

Only Delaney alluded to allegations of anti-Semitism on the Democratic Party’s left wing, including in Congress, where Rep. Ilhan Omar, D-Minn., has apologized for trafficking in anti-Semitic tropes. 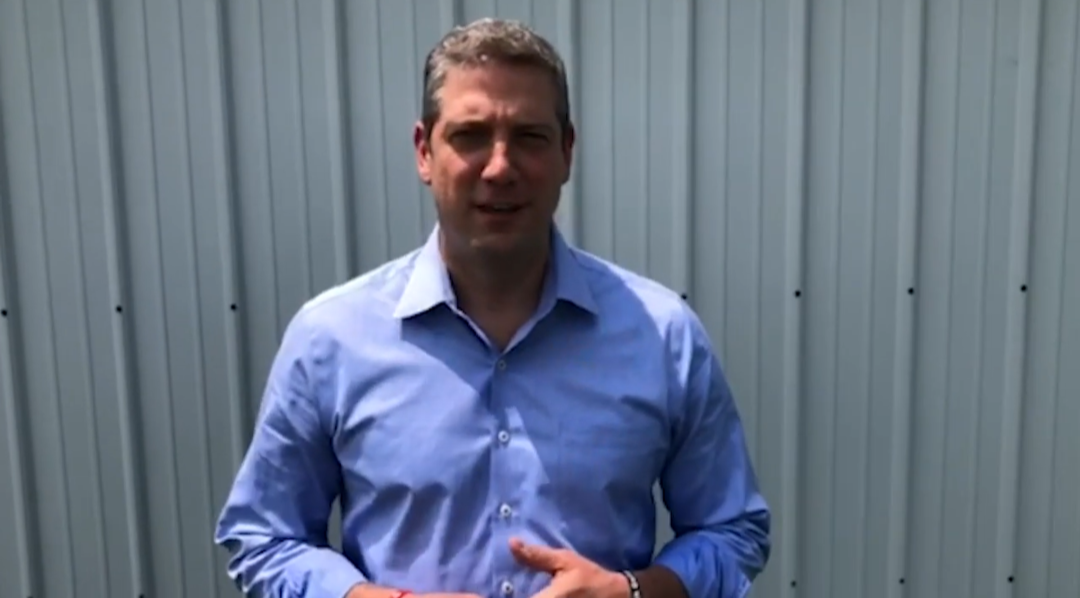 Booker and Gabbard did not mention Israel at all, which made sense in Gabbard’s case: She has galled the pro-Israel community by accusing Israeli Prime Minister Benjamin Netanyahu of spurring the United States to war with Iran.

Why Booker would not mention a country he has visited multiple times, and with which he is closely identified, was not clear.

How to assign blame in the Middle East

Republicans have sought to depict Democrats as soft on the threats Israel faces and of becoming estranged from the country. Democrats have little love lost for Netanyahu, seeing him as having exacerbated tensions with President Barack Obama and of embracing Trump too closely.

That has created a minefield for Democrats, and how each candidate crossed it reflected intraparty tensions. Here were some of the approaches, advanced at times by the same candidate:

The “b” word: Harris, Bennet, Biden and Buttigieg all offered some version of saying that support for Israel must remain “bipartisan.” The word has become a code for a perception that the party is drifting from Israel.

The “c” word: Criticizing Israel does not mean one is not pro-Israel, a number of candidates asserted. That can be interpreted as “friends sometimes disagree,” or placing part of the blame for any rift with the Democrats on Netanyahu. Cue Sanders, Warren, Hickenlooper, Biden and Buttigieg.

“The relationship has never been about individual leaders it’s been about the kinship, the values,” Biden said. “We also have to tell each other the truth and that includes offering criticism on polices that are counterproductive to peace.”

Warren, notably, was the only candidate to start her video referring to the U.S.-Israel alliance and also to argue that it was okay to have differences, typical of her reputation for delivering hard truths.

“In a world of complicated threats and challenges, America is stronger when we work with our allies,” said Warren, a progressive who sharply criticized Netanyahu for intimating that he might annex parts of the West Bank. “A candid expression of concerns does not diminish our friendship.”

Sanders, who in his 2016 bid for the Democratic nomination set new standards for explicitly criticizing Israel, was the most explicit in taking on Netanyahu.

“As someone who believes absolutely and unequivocally in Israel’s right to exist in peace and security who as a young man lived in Israel for a number of months [and] as someone who is deeply concerned by the rise of global anti-Semitism, we must say loudly and clearly that to oppose the reactionary policies of Prime Minister Netanyahu does not make anyone anti-Israel,” he said.

Hickenlooper was the only candidate to mention confronting Iran, the country Israel sees as its direst enemy. He and Delaney were also the only ones to explicitly reject in their videos the boycott, divestment and sanctions movement targeting Israel.

Of the 11 candidates who mentioned Israel, only Hickenlooper did not include a commitment to bringing about two states. The Trump administration and Netanyahu have retreated from advocating a two-state outcome, and it seems likely that the detailed peace plan drafted by Trump’s son-in-law, Jared Kushner, will not include Palestinian statehood.

Biden talked up the Obama administration’s record on Israel, which was notable because he was part of a team that pressed the Netanyahu government to come to an accommodation with the Palestinians.

Harris, by contrast, said, “a resolution to this conflict cannot be imposed by outside parties.” That comes across as a rejection of the approach of previous Democratic presidents (and some Republicans) who pushed hard for a resolution. It’s also a salvo in advance of Kushner’s plan, which reportedly is detailed, and which Kushner has suggested will be implemented with or without Palestinian cooperation. 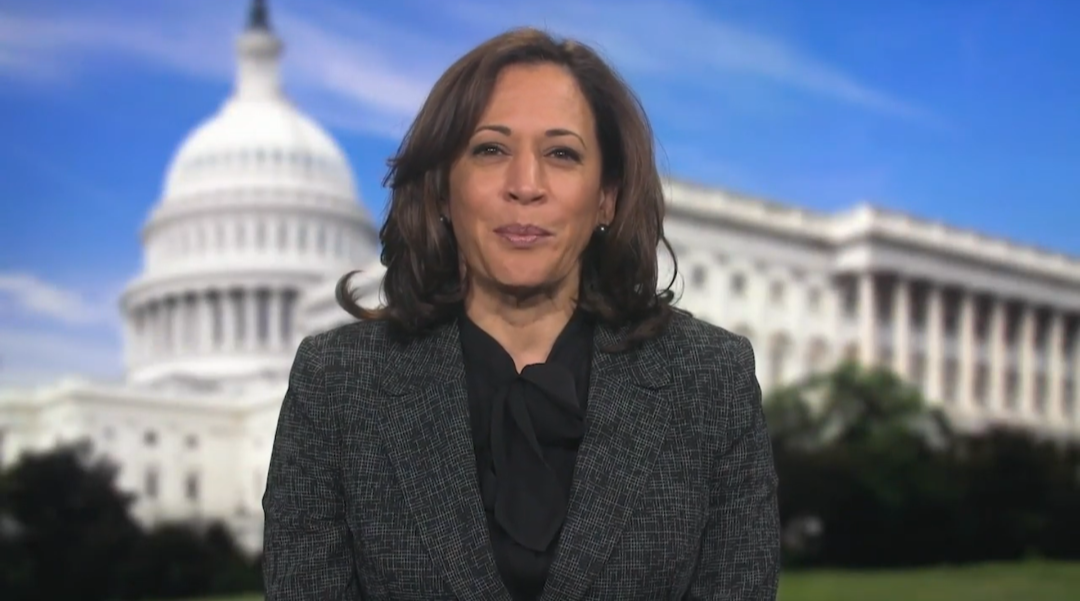 Tale of the tape

What a difference an election cycle makes: Sanders, who would bristle ahead of the last election when asked about his Jewish heritage, launched right into it on his video.

“As many of you know I am Jewish and very proud of my heritage. My father emigrated from Poland to the United States at the age of 17 to escape the poverty and widespread anti-Semitism in his country,” said Sanders, who raised Jewish eyebrows in the last election when he referred to his father as Polish, without adding Jewish. “Anti-Semitism is not some abstract idea for me, it is very personal, it destroyed a good part of my family.”

Biden mentioned his friendship with Golda Meir, as he inevitably does in Jewish settings. And Booker, who has studied Jewish texts and led a Jewish society at Oxford, mentioned Hillel’s encomium beginning “If I am not for myself, who will be for me,” and threw in a “yashar koach,” Hebrew for “more power to you.”

Some candidates took care with their presentations, above all Gabbard, who appeared to be in her office, and used professional lighting. Harris and Bennet went for the old reliable Capitol background.

Sanders conveyed his earnest message with a poster for the Red Hot Chili Peppers in the background. Lest one worry that the Vermont senator hums “Californication” to himself, there seems to be a more prosaic explanation: the band fundraised for him in the 2016 cycle.

Hickenlooper, the top of his head cut off and speaking in an empty warehouse, conveyed the impression of an audition for a dispensable character in “The Sopranos.”

Ryan, posing in front of a corrugated metal wall (the outside of a container?) seemed ready to break into a 1980s-era music video.